Greetings from Las Vegas (site of this year’s Channel Partners Conference and Expo) and Dallas.    This week, we will cover T-Mobile’s latest Un-carrier move which focused on business offerings as well as the latest developments in Over the Top programming development. 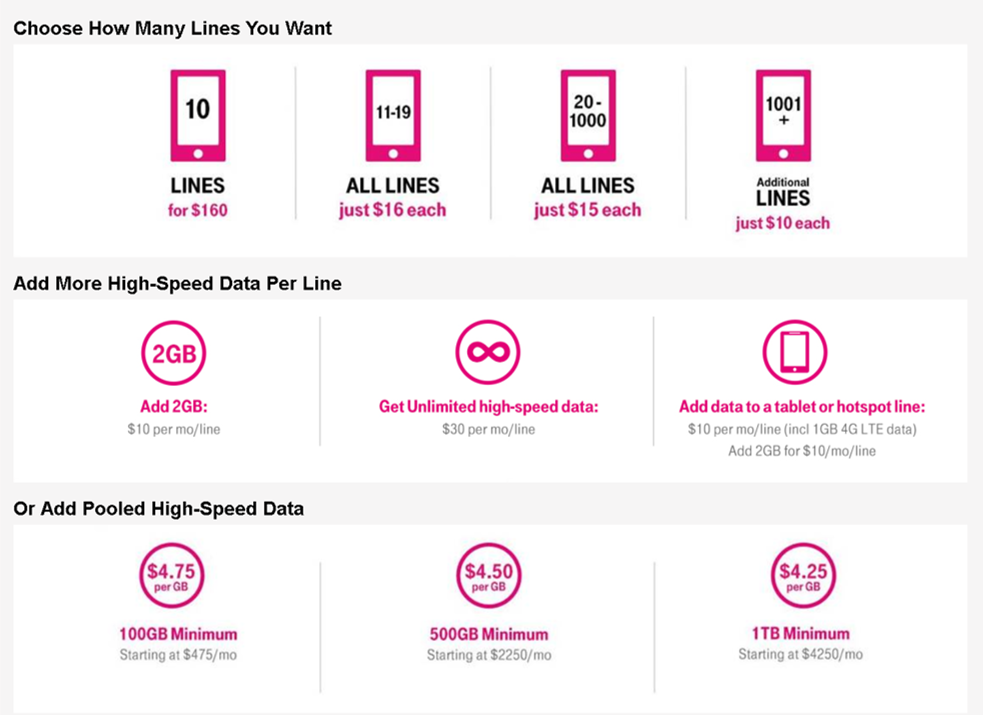 Throughout the course of telecommunications history, the pricing alchemy between business and consumer plans has been convoluted at best, and perverted at worst.  This started with landline (voice) pricing in the previous century, and continues today with wireless and broadband rates.  Individuals communicating/ browsing/ messaging over the same iPhone/ Android and surfing the same website pay more, on average, through their business than if they had purchased a consumer plan and been reimbursed.

For example, through Sprint, consumers can receive 4 GB of shared data with unlimited talk and text for each line for $140 (or $130 with the 8GB promotion currently offered).  If those four data sharers are actually four employees in a business, that rate jumps to $160 (see here and here for rate cards).  There may be an occasional exception to this rule, but, in general, business customers pay more for the same services than consumers.

T-Mobile’s announcement (see here) changes that equation significantly.  For $160, businesses receive 10 lines of service with unlimited talk and text and each line receives 1 GB of data (for those of you who do not follow T-Mobile’s pricing structure, this is a less expensive version of their 4 lines for $100 family plan).  Employees who use higher amounts of data can upgrade to an unlimited plan for an additional $30/ month.  Also, as shown above, businesses can pool data starting at $475/ mo. for 100 GB (note: while Sprint’s 100GB pooled data rate is 30% cheaper at $330, their $35 line fee for unlimited talk and text results in a higher overall price than T-Mobile for a 10 line business).

What’s most interesting about T-Mobile’s pricing structure is that it is most attractive to lower (1 GB/ month) data users.  This makes sense, as business web browsing, picture sharing and email access should result in less data usage than Netflix-hungry consumers.  How T-Mobile competitively positions their baseline offer, however, will be critical to their success.

The real kicker of the T-Mobile plan, however, is the linkage they have created between business and consumer plans (see here for the full details).  Every business wireless subscriber to the plans described above counts as the first line in a corresponding T-Mobile family plan.  That linkage is the real disruption in Wednesday’s announcement.  For example, if Mom has a business line through work, the remaining three family members would be priced at $30, $10, and $10/ month.  The same data upgrades per line would apply ($10 to 3GB, $20 to 5GB, $30 to unlimited).  This has an obvious effect on acquisition ARPUs in consumer if the employee plans are successful (T-Mobile did not explain how current subscribers could convert into this new plan so the effect on existing ARPUs is not known).

Bottom line:  T-Mobile’s new business plans are going to be very effective, not only for businesses but for their employees.  Given renewal cycles, the effect on quarterly gross and net additions will likely be steady (as opposed to sudden).  The depth of Un-carrier 9.0 will directly depend on their distribution strategy.

Will Showtime, HBO, and Others Get Fast Lanes?

Specifically cited in the article is the theory that each of these OTT services could be classified as a “managed service.”  Julius Genachowski, who preceded Tom Wheeler as the FCC Chairman, described his view of managed services as follows in a 2009 Brookings Institution speech (full text can be accessed through this link): 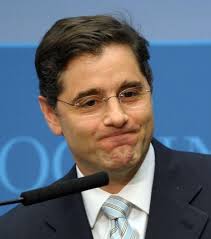 I also recognize that there may be benefits to innovation and investment of broadband providers offering managed services in limited circumstances. These services are different than traditional broadband Internet access, and some have argued they should be analyzed under a different framework. I believe such services can supplement — but must not supplant — free and open Internet access, and that we must ensure that ample bandwidth exists for all Internet users and innovators. In the rulemaking process I will discuss in a moment, we will carefully consider how to approach the question of managed services in a way that maximizes the innovation and investment necessary for a robust and thriving Internet.

The Journal (and subsequent news publications who did follow-up stories on the topic) did not go into the details of a possible agreement, but describe that managed services could be a component of a larger and more complex deal (which may or may not involve revenue sharing between broadband providers and video streaming companies).  What is clear is that data consumed through these services would not be included in any caps (which we cited as an inevitable outcome in a previous Sunday Brief).

Needless to say, this article left many net neutrality advocates confused and upset.  If paid prioritization was a bright line topic, how could Apple, Sony, and HBO get special treatment?  One possible answer:  According to reports, Comcast will make any managed service offering equally available to any company, so pricing could be transparent and “special treatment” wouldn’t be that special.

As of Sunday, the FCC has yet to comment on this report or provide greater definition of managed services, but the Open Order clearly outlines that there will be a review of all bandwidth  management processes.  How they rule on this matter could determine the future of streaming video.

A few weeks back, we penned an article proffering that if California could not kill the Comcast/ Time Warner merger, New York would certainly take a swing. (Note:  While Comcast has a small amount of customers in New York today, nearly 9% of the combined company’s customers would reside in the Empire state).

Everyone was hoping that some type of resolution would come in the March 18 Public Service Commission meeting (the fourth rescheduled ruling date).  The Albany Times-Union reported that the Commission had come up with specific “benefits” totaling $300 million.  However, the PSC decided to punt their decision to the April 20 meeting.

As we mentioned in a previous Sunday Brief, April is a critical month for the Comcast/ Time Warner Cable merger.  The Open Internet Order is behind the FCC (except for Comcast’s inevitable court challenge), the Department of Justice should soon have a new Attorney General, and April will mark 14 months since the merger was originally announced.   Something’s got to give.

For some of the “benefit” ideas that were offered to the PSC, click here for Ars Technica’s article on New York City’s public advocate Letitia James.  Her ideas make California’s merger conditions almost look reasonable.

Next week we will cover the Top 10 events that shaped the first quarter (nominations welcome).  Until then, if you have friends who would like to be added to The Sunday Brief, please have them drop a quick note to sundaybrief@gmail.com and we’ll subscribe them as soon as we can (and they can go to www.sundaybrief.com for the full archive).