Greetings from Seattle (pictured), Dallas, and Nashville.  This has been a week filled with news (Mobile World Congress, analyst conferences, and the normal course of business) and regulatory conjecture.  I have decided to stop trying to figure out what fine-tuning the Commission is doing between the vote last month and the final release of the Report and Order.  They issued a blog post on Tuesday (see here) trying to explain the lag and it only raised more questions with analysts and media alike. 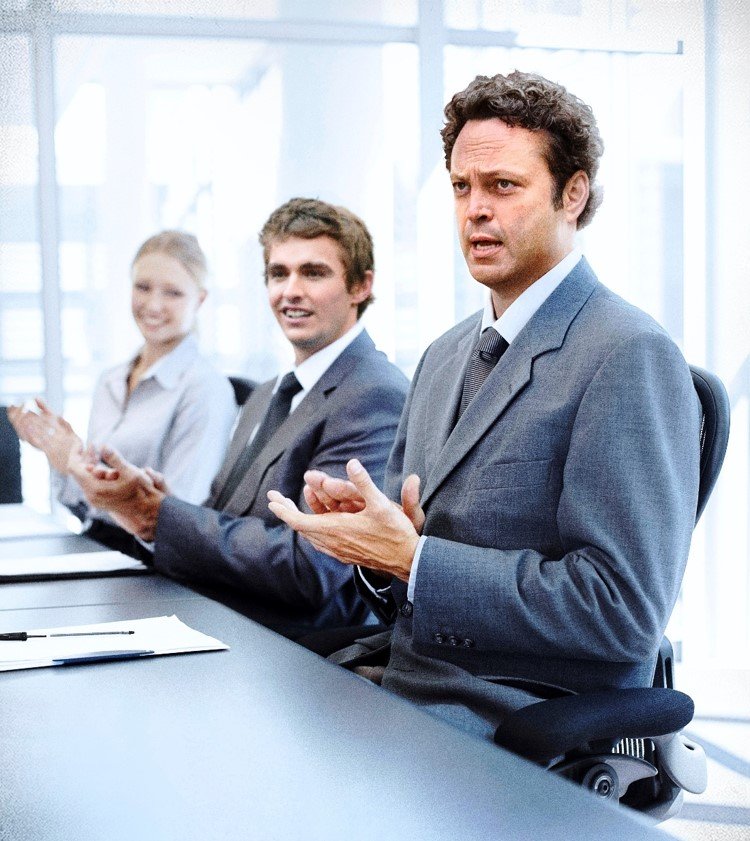 , a popular movie currently in theaters, and offer free photo stock for all communications services providers to insert into their PowerPoint presentations (see Vince Vaughn example here and at right).  Imagine a presentation on sponsored data with Commissioner Clyburn showing a quizzical (or downright skeptical) look, a thumbs up from Commissioner Wheeler, or the disapproving furrowed brow of Commissioner O’Rielly.  It would bring some fun back into board rooms everywhere.

Before moving on to Comcast news, there is one new regulatory item worth mentioning (and those of you who peruse my LinkedIn feed already saw my thoughts on the topic Friday).  Cox Communications, the perennial winner of “good guys of cable” award (not to mention that they have been the breeding ground for both Comcast’s and Time Warner Cable’s commercial services business unit presidents) took to the mediasphere excoriating the FCC for their nuanced definition of a “cable company.”

At issue is a Notice of Proposed Rulemaking (NPRM) issued by the FCC in late December designed to make it easier for Over the Top (OTT) providers to broaden their content lineups by classifying themselves as Multichannel Video Programming Distributors (MVPDs).  Currently, unless the provider actually controls the transmission layer, content companies and cable (sports, news) programming divisions do not have to engage in retransmission discussions.

Not surprisingly, Cox takes the position that the Commission should continue with their current definition of “channel” which was reaffirmed in 2010 and 2012 (MVPD rights would only extend if the OTT provider also controlled the transmission path).  This would eliminate many competitors who seem to be thriving without offering local broadcast content (see here for SlingTV’s latest subscriber estimates from Re/code).

But Cox goes further, imploring the FCC to confirm and enforce the classification of AT&T U-Verse and Google Fiber as cable companies.  Cox succinctly lays out their argument to the FCC as follows:

Just as the interests in avoiding competitive distortions warrant establishing a level playing field for all MVPDs if OTT providers are deemed MVPDs, they likewise justify Commission action to ensure that all entities that meet the definition of “cable operator” under the Communications Act—including self-styled “IPTV” providers such as AT&T and Google Fiber—comply with the duties attendant to that classification. The NPRM appropriately proposes to clarify that cable operators’ provision of managed IP-based services over their cable systems does not alter the classification of such offerings as “cable services” under the Act, and that, by contrast, OTT services are not cable services regardless of whether they are provided by a new entrant or traditional cable operator. But the NPRM fails to call out that its analysis of IP based video services undercuts the strained efforts of AT&T and Google Fiber to maintain that their IP cable services are somehow exempt from cable regulation. Such claims have no legal or factual basis, as the NPRM implicitly recognizes. The Commission should make that understanding explicit and should not permit video distributors to flout their duties under Title VI.

Frankly, I had no idea that Google and U-Verse sought to designate themselves as something other than cable companies.  They market themselves as an alternative to cable company video programming (unlike SlingTV).  They compare their channel line-ups to the incumbent cable company in their promotional material.  And they package and price their services using tiered and premium structures straight out of the cable playbook.  So if AT&T and Google swim, walk, and quack like a cable duck, aren’t they cable providers?  Kudos to my friends at Cox for publicly discussing this issue and exposing the unique regulatory interpretations of their competitors.

California May Have Killed the Comcast/ Time Warner Cable Merger

While many of you have been following the federal (FCC, DOJ) approval of the Comcast/ Time Warner Cable merger, some long-time cable observers warned me that “as goes California, so goes the country” with regard to conditions and approval.

On February 13, California delivered Comcast and Time Warner Cable a personalized Valentine, which included the approval of their proposed merger, provided that the following conditions were met:

Not surprisingly, Time Warner Cable and Comcast jointly filed objections to the merger on Friday (full document here).  While some of the items above could be resolved, is it likely that Comcast and the Commission could reach a middle ground on utility regulations, massive Internet Essentials program expansion, and tacit support for municipal broadband deployments?

The California Commission and Comcast appear to have reached a stalemate.  At best, it’s two months of hard slog to define which new regulations Comcast will have to obey (and the penalty severity should they decide to ignore some or all of them).  At worst, California did the dirty work for the FCC.  Look for more color on the process in the coming 45-60 days.  No news is likely bad news on this front. 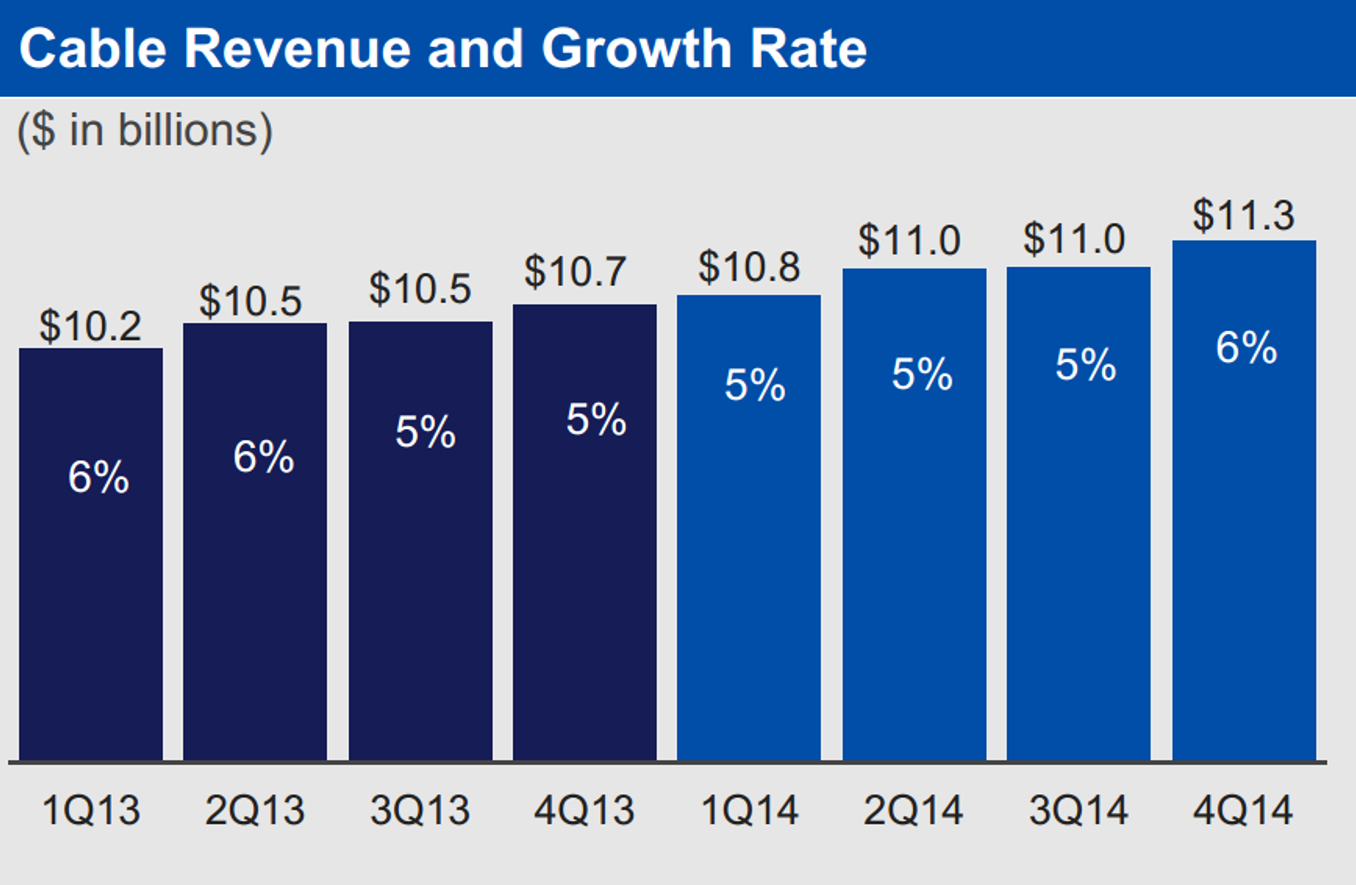 Comcast is the Envy of the Wireline Industry

For all of the ad hominem attacks on Comcast as a large behemoth with horns, their earnings for the fourth quarter and full

year 2014 were spectacular.  No other wireline company comes close to their growth on an absolute or relative basis (AT&T and Verizon’s wireline businesses shrank in 2014; Comcast’s cable division grew $2.3 billion).

For all of the attacks Comcast has taken in the net neutrality debate, consider the following revenue growth engines that did not exist a decade ago:

That’s $7.7 billion of revenue, the majority of which did not exist a decade ago.  In one instance, Comcast had to develop a product whose quality was equal to or greater than that of an incumbent (including prickly things like E-911).  Comcast had to enter into thousands of interconnection agreements with large and small (mostly small) providers.

In the case of business services, Comcast had to convince customers that they were credible.  Connections to businesses had to be established.  Provisioning of non-standard services had to be accommodated, and Ethernet products had to be as good as or better than those offered by the incumbents.  And, unlike Time Warner Cable, Comcast has proportionally less cell site backhaul (large contracts with very long contract terms).  Michael Angelakis disclosed at a recent analyst call that they have 20-25% market share in the small/ medium business space.  Comcast may have made their entry into Business Services look easy, but it was far more risky than adding residential voice.

If $7.7 billion in incremental (primarily) organic revenue growth over the past decade is not enough, what about their foresight to add 5 GHz Wi-Fi?  This is a gold mine for the company, not only as the “guest provider of choice” for in-home routers (dual mode Wi-Fi modems) but also for outdoor Wi-Fi services should they expand their presence (and Angelakis suggested that this might be a reality within a year after the merger ends).  With T-Mobile and Verizon looking at LTE-U (Unlicensed, meaning use of Wi-Fi spectrum), Comcast is extremely well positioned.

There’s plenty to complain about with regard to Comcast.  But this is not a stodgy bunch of Philadelphia kings in their counting house, counting all of their money (see full rhyme here), but rather entrepreneurs with a long history of understanding local topology working to grow bandwidth services to homes and offices.  Their service still leaves a lot to be desired (hopefully a relationship with StepOne Inc. will fix that), and video and voice services are in subscriber decline, but they are not resting on their laurels and simply milking cash cows all day.  They are managing portfolios and, at least at the wireline level, outperforming their peers by a mile.

Next week we will begin our analysis of first quarter growth drivers by reviewing T-Mobile’s recent management presentation and other wireless news.  Until then, if you have friends who would like to be added to The Sunday Brief, please have them drop a quick note to sundaybrief@gmail.com and we’ll subscribe them as soon as we can (and they can go to www.sundaybrief.com for the full archive).