Fair for Whom? RIP, Unlimited Internet

Editor’s Note:  Jim will be participating on a panel moderated by Roger Entner of Recon Analytics on Monday, March 9.  One of the topics covered will be the effects of the Open Internet Order.  Register for free by clicking here and invite a friend.

Greetings from a wintery Dallas.  As expected, this has been a week full of rhetoric with respect to the FCC’s pending Open Internet Order (pictured is Verizon’s response typed in Morse Code – a brilliant PR move, although one unlikely to help their position with the FCC).  As we discussed previously, there are going to be a lot of changes to telecommunications networks as a result of this order.  This week’s Sunday Brief analyzes the Open Internet principles and attempts to classify a few operational areas that we believe will change.  Again, the final version of the order is likely to be released in several months and all of these comments are speculative in nature.

The largest change will center on broadband engineering and management.  About all we know so far are the guiding principles:  Networks must be fast, fair, and open.  While these principals make for good sound bites, how each of these terms are defined will be the topic of great debate.

To What End: How Fast Should Networks Be? 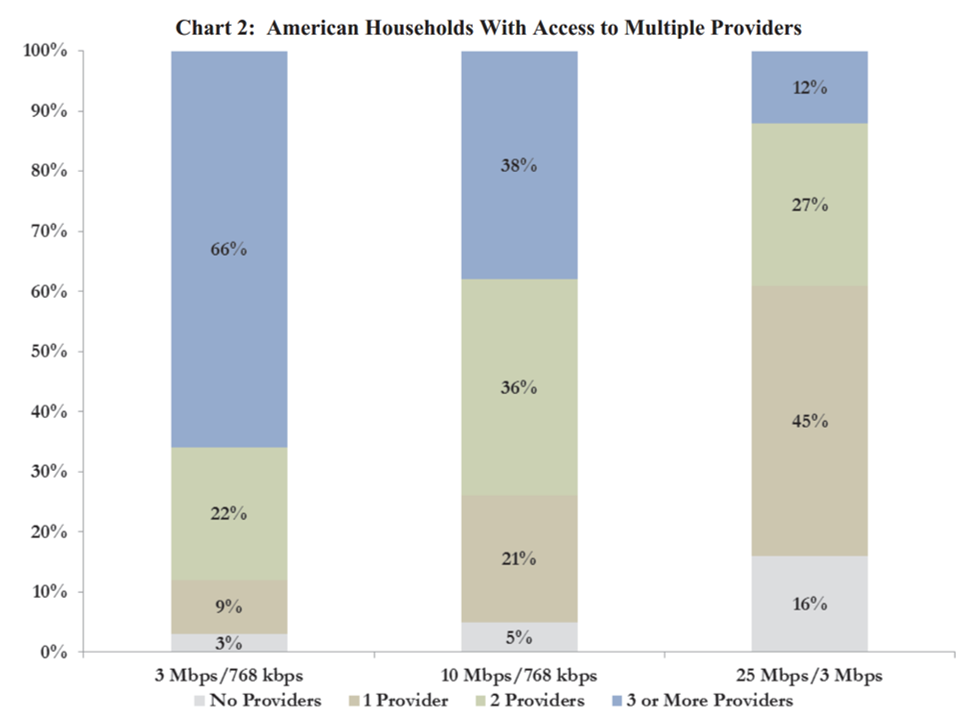 On speeds, the FCC recently established a new standard that 25Mbps down/ 3 Mbps up must be available to classify as broadband (news release is here).  In their news release, the FCC announced that the gap had only closed by 3% (in 2012, 80% of the public had access to 25/3 speeds, while in 2013 that figure rose to 83%).  Another way to think about that is that the cable industry covers 83% of the country with at least 25 Mbps (and with the DOCSIS 3.1 and G.fast standards just around the corner, the probability that two or more carriers will serve the majority of the country with 100 Mbps or faster speeds is high).

Determining the benchmark speed corresponds to the country’s objectives.  The FCC chose three in their report to settle on a 25 Mbps standard vs. a 10 Mbps standard:  a) The ability to support multiple HD video streams; b) The ability to stream at the 4K video standard, and c) The ability to participate in an online class, stream HD, and download files simultaneously.

Without going further into the efficacy of determining which behaviors are appropriate for the national benchmark standard, I think you get the point:  Standards, by definition, are capricious and arbitrary.  What is acceptable for one household (e.g., the 81 million homes that do not pay for Netflix) is going to be unacceptable for another (e.g., the 38 million homes that pay for Netflix).

Fair for Whom?  RIP, Unlimited Internet

Networks must be fair.  The establishment of “What is fair?” in technology has been elusive since the introduction of the first computing devices 40 years ago.

One of the concepts that has been hotly debated during this process is open access, the process whereby each server connected to the Internet (provided they are engaging in lawful behavior) has the ability to reach the same Internet audience as any other server.

Open access, however, is often times confused with equal outcome.  Start-up companies connected to the AWS (Amazon) cloud or Rackspace or Savvis have a pretty good shot of reaching customers faster and more broadly than start-ups connected to a server connected in the office.  It may not be more than a few seconds faster, but if the start-up is operating a videoconferencing (or other low latency) service, this might matter.

Even before last mile throughput is considered, a tacit “paid prioritization” system already exists.  Servers that connect to the Internet through AWS or Rackspace or Savvis could (and in many instances do) pay more because these companies have faster and broader Internet connections (or, in Internet lingo, fewer “hops”) than their local telco (especially if that telco does not operate a large Internet backbone).  Small companies who cannot afford to connect to Comcast near each headend are already beginning with a disadvantage.  Without reinventing how the Internet works, that disadvantage is going to exist. 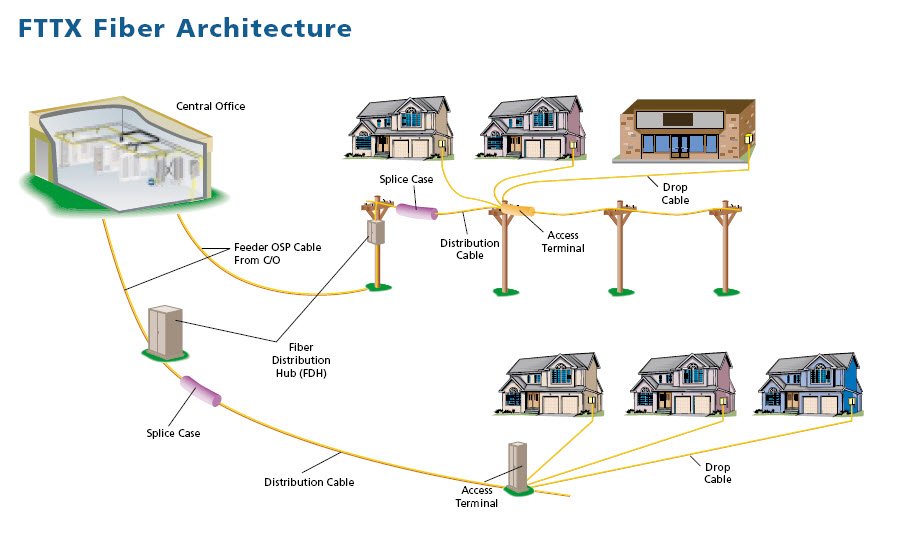 That leads us to fairer local (or last mile) networks.  Within a local network (see diagram), there are several components: 1) a loop (or drop) which is the connection from your home to the first entry point into the broadband network; 2) the network interface point (or multiplexer) where several connections combine traffic and are consolidated.  There could be multiple multiplexing layers; and 3) the Point of Presence which is the ultimate consolidation point for a regional area.  There are likely multiple POPs in a given market.  (For wireless networks, think of this as connecting to a tower, which acts as the first network interface point, and consolidates traffic at one or more routers/ switches in a market).

The FCC has now injected itself into the engineering of these three components. Broadband providers are left asking themselves:

There are other questions broadband providers will be asking themselves, but, through explicit direction or through definition of “just and reasonable” the FCC will now become the de facto engineering department of AT&T, Verizon, Sprint, T-Mobile, Comcast, and others.

The broadband providers have no other choice but to react with “just and reasonable” pricing.  This will start with the elimination of unlimited plans for higher speed tiers (think Verizon FiOS Quantum speeds of 50 Mbps or higher).  Perhaps customers receive 500 GB of usage per month for a 50Mbps plan and 750 GB per month for a 75Mbps plan (the average broadband home uses about 55-75 GB per month today with fiber-based solutions using far more).  If this 2014 DSL Reports post is any indication, Verizon has been considering capping usage for the most extreme cases for some time.

The change will be quick.  Wireless plans used to be unlimited, but, in the process of 36 months, have changed to metered (while T-Mobile and Sprint continue to offer unlimited products, they are premium priced – 60% more at the individual level for T-Mobile).  And, as the broadband providers will be quick to point out, networks need to be fast, fair, and open.  Something’s gotta give – affordability be damned.

Surprise!  Your App is now a Telecommunications Service

The last network requirement is that networks must be open.  By redefining information service providers as telecommunications providers, there’s a strong possibility (held up by the courts through the Brand X decision) that many information services will now be defined as telecommunications services.  This definitional change is going to going to come as a surprise to Apple and Google.

What many in Silicon Valley don’t understand is that, according to the Supreme Court’s 2005 Brand X decision, nearly any “tech” company that builds a telecom-style network to deliver its content and apps has the potential to be captured by the FCC’s new rules. If the agency tries to exempt some companies but not others, it will be choosing the politically favored over everyone else. 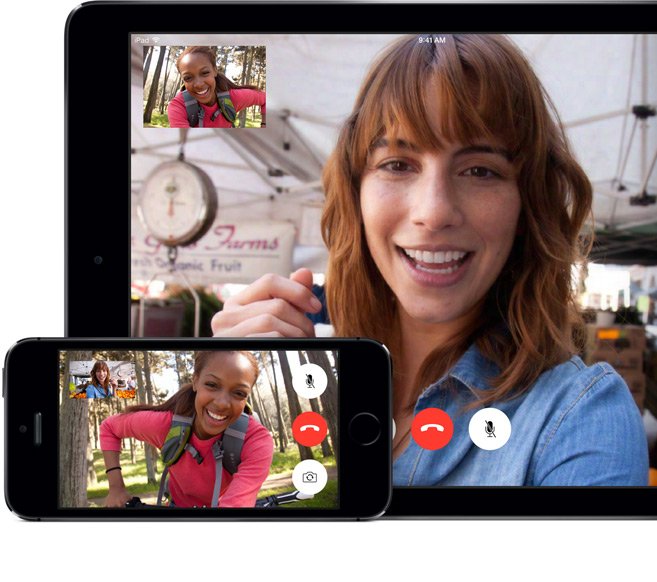 The most obvious example of a telecommunications service by this new definition is Apple’s FaceTime (for the few of you who are not familiar with FaceTime here’s Apple’s current description of the product).  Because Apple operates a large, private network connected to many servers that need to interact with software on an Apple device (which consumers paid hundreds of dollars for), they are no longer an information services provider – they are now a telecommunication services provider.  Welcome to Title II, Mr. Cook.

What could this redefinition mean for Apple?  First, Apple cannot operate FaceTime as private network.  Google Hangouts, Skype, Fring, Tango, ooVoo, and dozens of other video calling apps now have the right to interconnect into FaceTime.  Apple will need to provide a programming interface (API) and will be subject to the same Open Internet rules as everyone else.   The same will apply for Google Hangouts (probably a net benefit for Google) and to Skype (owned by Microsoft).  The details of each API will be scrutinized by government officials and weighed against national benchmarks.  Start-up video providers will have to begin with multiple interfaces and be subject to the same interconnection requirements.

This is one hot mess.  But wait – it gets even hotter and messier.  FaceTime operates under the parameters of Apple’s operating system (called iOS) – it cannot operate independently (that is my understanding and I am sure one of you will confirm if I am incorrect).  If the telecommunications service provider has developed a proprietary system to allow communications services to operate, should this proprietary system be subject to the same open standards as other network providers?  Absolutely – we need to open up proprietary systems such as Siri, Cortana, Google Voice, Android, IOS, and Windows Mobile.

Regulation is a tough business.  Engineering, invention, and competition are tougher.  The FCC has opened up a box it now cannot close.  This will drive the end of unlimited Internet plans for high-end users (resulting in a progressive tax in the form of overage charges), and usher in a new era of government-led Universal Service Fund subsidies which will lead to higher prices for all but the poorest and farthest-flung broadband users.  AT&T will refocus its efforts on Mexico and Latin America, and Verizon on paying down its debt (instead of deeper and broader investments).  Their stock prices will rise, but investment acceleration will fall.  That’s the legacy this FCC will leave for America.

Next week we will recap Mobile World Congress events and check in on broadband competition (spoiler alert: cable providers still dominate share of decisions).   Until then, if you have friends who would like to be added to The Sunday Brief, please have them drop a quick note to sundaybrief@gmail.com and we’ll subscribe them as soon as we can (and they can go to www.sundaybrief.com for the full archive).