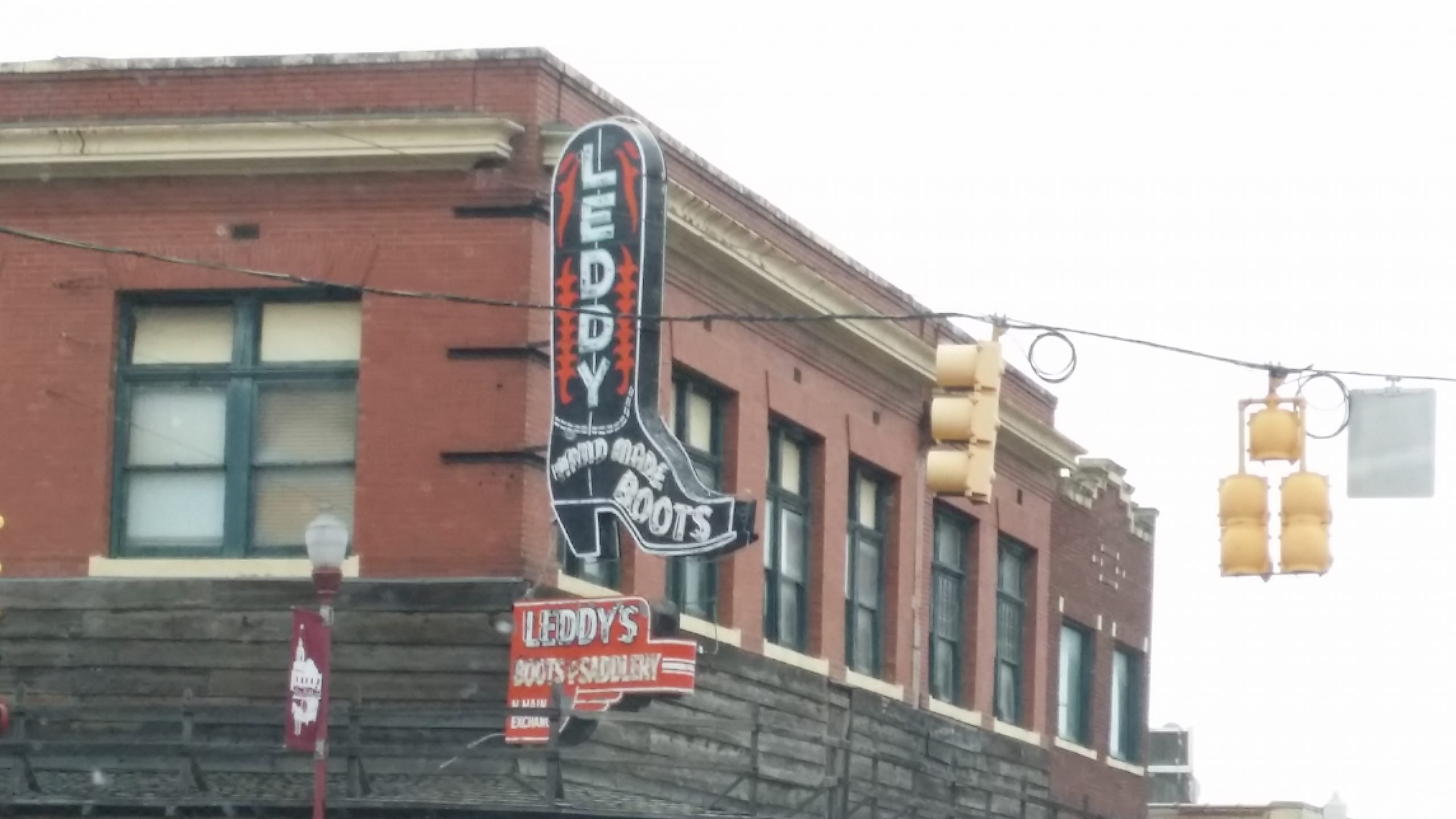 Spring greetings to everyone from Las Vegas (81 degrees, sunny on Monday and Tuesday) and Dallas (60-80 degrees and windy).  The Patterson family even ventured over to Ft. Worth on Saturday with out-of-town friends for our first visit (picture is from the Ft. Worth stockyards).  A great town full of fiercely independent yet friendly residents.

Las Vegas was the site of this spring’s COMPTEL show, which was well attended.  Under the leadership of new CEO (and former Congressman) Chip Pickering, the show featured Windstream’s CEO Jeff Gardner as the keynote speaker.  Jeff is a terrific presenter who matter-of-factly speaks about a company in substantial transition:

There’s a lot more in a second, wide-ranging interview here.  Windstream is one company we have not focused on much in The Sunday Brief, but, given their increasing integration of Paetec and the acquisition of medium-haul fiber acquisitions (which Windstream purchased for nearly a billion dollars including debt in 2010), the company may be worth a deeper dive.  Windstream’s strategy appears to be a lot closer to CenturyLink’s (e.g., Savvis) than Frontier’s (e.g., AT&T Connecticut/ SNET acquisition) at this point.

Knowing that the headline would be sure to turn heads (especially with the Level3 and Cogent readers of The Sunday Brief), it’s probably best to finish the sentence “… to propose new interconnection measures as a result of the Comcast/ Time Warner Cable merger.”

There has not been a lot of talk about IP transit providers recently.  Like retransmission disputes on the video side of the cable business, the talk about transit only happens when something goes wrong (specifically, agreements break down).

For those of you new to the world of IP Transit, here’s a very simplified use case:

a)      A Nashville-based Netflix customer orders a downloaded copy of Bad News Bears in Breaking Training from the Netflix library.

b)      This does not happen to be one of the titles hosted by Netflix on their local (Nashville) servers.

c)       Netflix generates an IP query to their servers in California to retrieve the obscure title.

d)      This data is transmitted back through an IP Transit provier (Level3) from California to Nashville as quickly as posisble.

e)      At an interconnection point, Level3 hands off this traffic to Comcast.

f)       Comcast transmits this traffic through their network to the customer’s home.

If it were a more popular title (or the customer is located right near the Netflix servers in California), steps b) and c) might be eliminated.  However, the topic this week was the size of the interconnection pipe in described in e).  Level3 and Cogent both filed comments with the FCC this week calling attention to the availability of connectivity to the Internet Service Provider (ISP) network.

“Both tolls on edge providers and tolls on transit providers pose the same risks to the free and open Internet. That is, just as an ISP has the incentive and ability to charge tolls to edge providers in order to generate revenues (and which generate significant negative externalities), it has the same incentive and ability to charge tolls to transit providers to generate revenue. If an ISP’s tolls were charged and paid, transit providers, which operate in a highly competitive market which has seen tremendous price compression over the years, would have no choice but to pass these significant, additional costs on to those who purchase transit from them—the very edge providers that the Commission was attempting to protect from such tolls.

While the precise size of the tolls demanded vary from ISP to ISP, in Level 3’s experience they frequently equal or even exceed the price that Level 3 charges its customers for transit to those ISPs’ networks (and the rest of the Internet as a whole). Said another way, some ISPs want to charge an access fee for access to their little corner of the Internet (i.e. their customers) that frequently equals or exceeds the fees Level 3 charges its transit customers to reach every destination on the Internet.”

Simply put, Level3, who has historically charged customers based on product costs have now met up with Internet Service Providers who want to charge based on the product’s value.  This brief does not adequately summarize the full extent of the compexities involved in engineering IP traffic (given Netflix and other services’ growth), but there is a very good summary here (from Ars Technica) as well as from Level3 and Cogent.  Both are worth reading.

Interestingly, from the Ars Technica article, it appears that AT&T and Netflix have not come to terms (see Jim Cicconi’s response to Netflix CEO Reed Hasting’s article here).  This is intriguing as AT&T Mobility would stand to gain hundreds of millions of additional revenue dollars per year from increased revenues if the interconnection speed were increased (!).

In a sad reminder of the generational technology gap that exists throughout the world, we have the recent shutdown of Twitter in Turkey.  On Thursday, Turkish Prime Minister Recep Tayyip Erdoğan indicated that he would “Wipe Out Twitter” and summarily ordered Turkish ISPs to block access to the website. 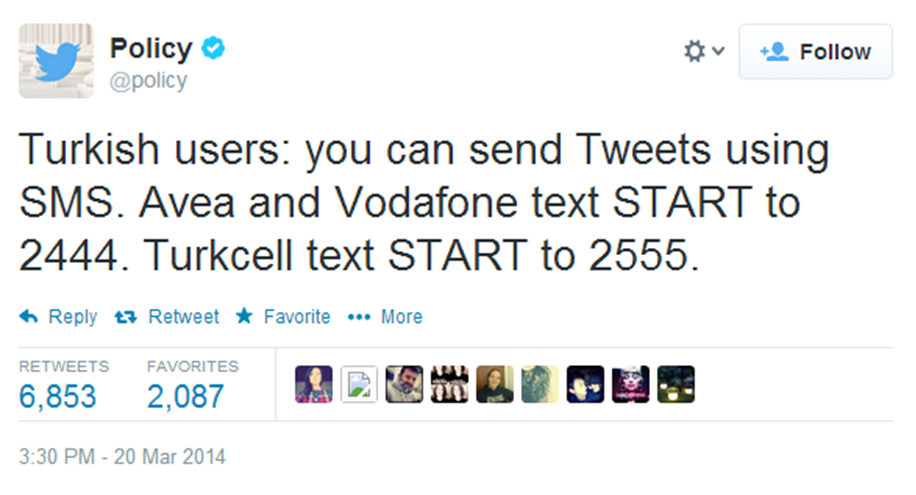 This problem appeared to be solved (500,000 tweets were sent out using the workaround in the 10 hours following the initial ban, with the hashtag #twitterisblockedinTurkey carrying the #1 ranking for much of Friday) until the Turkish government shut down access to this service and the entire Google Domain Name Service (DNS) website.

According to Statista, Turkey has the fourth largest number of Twitter accounts (12 million for the entire country with 7 million in Istanbul alone, according to Twitturk).  Tweeting is the primary means of communication for many millennials. 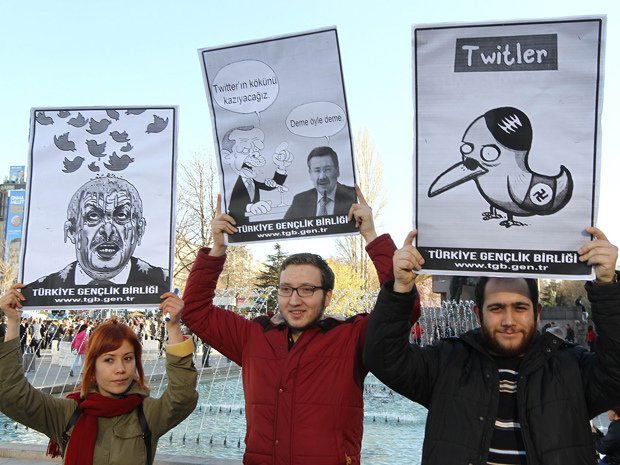 People hold placards as they protest against Turkey’s Prime Minister Tayyip Erdogan after the government blocked access to Twitter in Ankara, on March 21, 2014. Twitter was blocked in Turkey on March 20, just hours after Prime Minister Recep Tayyip Erdogan had threatened to “wipe out” the micro-blogging service. Erdogan has come under mounting pressure since audio recordings that spread across Twitter and other social media appeared to put him at the heart of a major corruption scandal. AFP PHOTO/ADEM ALTANADEM ALTAN/AFP/Getty Images

If that weren’t enough, Google faces a complete shutdown of YouTube in Turkey as a result of their failure to remove videos purporting to provide definitive evidence of the Prime Minister instructing his son to hide large sums of cash.  On that day, three former ministers’ sons homes were raided.  The YouTube video that has produced the strongest reaction from Erdogan is here. Erdogan has vehemently denied that the phone conversation ever occurred.  His office issued the following comments on Saturday according to this Reuters article:

“Twitter has been used as a means to carry out systematic character assassinations by circulating illegally acquired recordings, fake and fabricated records of wiretapping…It is difficult to comprehend Twitter’s indifference and its biased and prejudiced stance. We believe that this attitude is damaging to the brand image of the company in question and creates an unfair and inaccurate impression of our country.”

All of the activity is happening a week before national parlimentary elections.  More developments and full background can be found in the CNET article here, Ars Technica’s article here and yesterday’s New York Times article here.  It’s hard to imagine this type of treatment in a country who strives for democracy.  It took a nuclear option, but Turkey managed to silence social media.

Next week, we’ll provide a wireless preview of the first quarter, as well as the HTC announcement on Tuesday of their newest smartphone.  Until then, if you have friends who would like to be added to The Sunday Brief, please have them drop a quick note to sundaybrief@gmail.com and we’ll subscribe them as soon as we can (and they can go to www.sundaybrief.com for the full archive).  Have a terrific week!