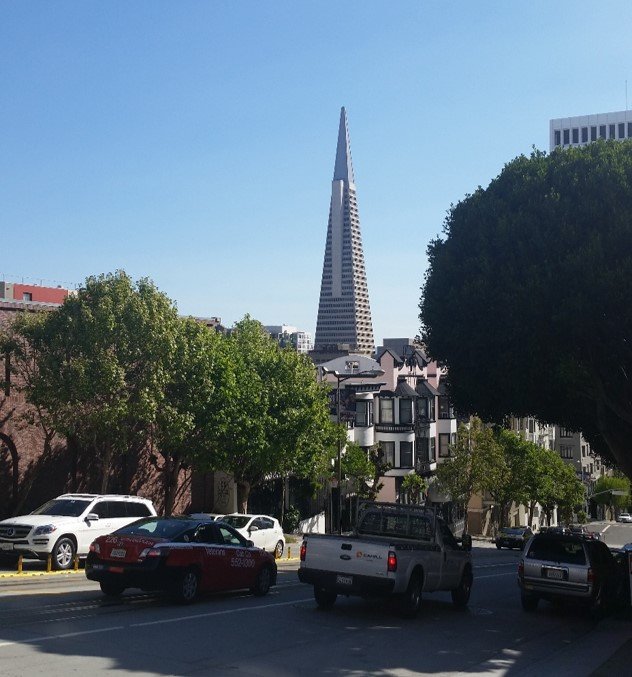 (Nearly) Tax Day greetings from San Francisco (the Transamerica Pyramid from the top of California Street pictured), Springfield (Missouri), Louisville, and Dallas.  While we will be digesting a lot of events from the previous quarter in this week’s Sunday Brief, the second quarter appears to be off to a very strong start.

Before we review five additional Q1 impacting events, I would like to solicit your help.  In one of the keynotes I will be giving in a few weeks, I’ll be talking about the increasing frequency of instances where mobile devices and formats are the primary access media. Specifically, I would like to present ten cases where you, the Sunday Brief faithful, would rather go to your mobile device to access information then go to your laptop/ desktop (and perhaps even tablet).

One example that comes to mind is the weather.  With the rewrite of The Weather Channel app, I would rather check it on my Android device than through my computer.  Others might include car services (Uber – except for folks in Kansas City – see here), photo sharing, etc.  On the flip side, I have not mastered (nor do I have any real desire to master) reading books through the Kindle app on my mobile device.  If you could reply to sundaybrief@gmail.com with one use case where your first instinct is to pick up your mobile device for info, I would greatly appreciate it.

We started the first quarter review before the Easter/ Passover Holidays with five events.

As many have noted, the Order sets up a complaint process to determine what is an “unjust and unreasonable” practice.  This could apply to any aspect of the Internet Provider’s operations that related to providing broadband services (see Section 202(a) and page 12 of the Order for the FCC’s justification).  Broadband providers are most worried about lawsuits that challenge their pricing models, particularly for unlimited packages.

As we noted in one of the first columns on the topic, offering an unlimited Internet product becomes too risky under the Order’s framework.  While capped broadband pricing existed prior to the Order’s release (we cited AT&T and Mediacom packages), it’s likely that if challenges to the Order are refuted, few broadband service providers will offer an unlimited package (this includes wireless).  The effect of this on consumer viewing habits considering the changes occurring in Over the Top (OTT) programming are unknown.

The Sunday Brief was also one of the first publications to explore the implications of the Open Internet Order on telecommunications services, specifically Apple FaceTime, Google Hangouts, and a host of other directory-based services. These services were considered “enhanced” because they were carried by “enhanced service providers.”  However, they are now carried by common carriers, and, according to the 1996 Telecom Act, should be regulated in a similar manner.  This includes equal access (interconnection between Google and Apple), directory services, emergency services, and a host of reporting requirements.  When FaceTime was first introduced with the iPod, the combined product was described by Steve Jobs as “the iPhone without a contract.”  It will be interesting to see how Apple defines the phone services in the context of the Order.

The Order will be introduced into the Federal Register on Monday (April 13).  Look for the lawsuits to start shortly thereafter and to continue throughout 2015.  While the FCC is confident that it will hold up to legal challenges (and it is likely that they will), it is equally likely that broadband service providers will be granted a stay until the court process is completed.  More on this throughout the summer.  For a full download of the FCC Open Internet Order, click here.

When we wrote about the plan (see “T-Mobile Means Business” Sunday Brief here), we highlighted that business customers received a dual benefit – lower pricing (see graphic), and lower pricing for employee-liable family plans.  How this is being explained to businesses by T-Mobile sales reps was not available when we originally wrote the column, but we have confirmed that the tactic is resonating with smalll businesses and their employees (the second benefit is that the employee line functions as the first line purchased in any T-Mobile Family Plan, creating a discount from $50 to $30 for the first line, and also from $30 to $10 for all subsequent lines).

Facebook announced that they would be opening up Messenger (700 million monthly active users) as a platform for developers.  This seems like a small development, but it’s important to remember how pervasive Facebook has become as a default sign-in platform.  For example, FedEx could use a Messanger API (programming interface) to notify you that the package was left at your door (and even provide photographic evidence that they did so). It would be secure, private, and, best of all, requires no additional sign-in/ authentication.

What this sets up is a B2C (Business to Consumer) model where all authentication and communication flows through Messenger. It also could allow businesses to get a better view of the total customer needs universe (e.g., a FedEx package delivery plus a series of airline communications through Messanger could map to a particular user profile that makes the customer a likely candidate for hotel or rental car deals).

The Messanger updates are a big move, and could impact how Messanger interfaces with iOS and Android in the future.  Opening up the interfaces to third party developers is a very big deal.  More from these articles in TechCrunch and The Verge.

It’s also been unpopular with California and New York, two states that will have a large portion of the combined company’s customers.  We discussed this extensively in a previous Sunday Brief (see here) and one of the California Public Utility commissioners came out against the merger this week (space does not permit a full analysis, but here’s a good article by the Los Angeles Times on the objections and counterproposal).

It’s not certain how vigorously Comcast will fight to complete this merger.  They have never been financially stronger, and it’s likely thet Time Warner Cable will be acquired by Charter Communications (partially owned by Liberty Global) if their merger falls through.  If Comcast were to acquire another cable company, both Bright House Networks (Florida) and Cablevision (Long Island, New Jersey, Connecticut) would form stronger clusters.  Or TWC could merge with Cox, Bright House and Cablevision to form a second Comcast and leave Charter with no partner.

It’s likely we will get closure on the outcome (or have a much higher probability one way or the other) by the end of June.  Either way, Comcast is in a strong position.

Charter is acquiring one of the consistently highest rated cable companies in the United States (see JD Power 2014 residential phone results here.  Bright House had similarly strong rankings for High Speed Data but Verizon FiOS won that award).  One of the reasons why Bright House has such strong ratings is due to its concentration in Central Florida (see pictured pro forma map).  This has allowed them to focus on service to a greater extent than their peers.

Charter also inherits a profitable operation (likely more profitable than their current one) that has experience from several years of FiOS competition.  While Bright House does not provide the geographic reach of Time Warner Cable, they bring a customer experience franchise that will undoubetly make Charter a stronger competitior.

It’s important to note that this transaction is contingent on the successful closure of the Comcast/ Time Warner Cable merger.  However, assuming that comes to pass, the resuting Charter will represent the greatest transformation of a communications company since the breakup (and reconstitution) of AT&T.

On April 19, we will start the first quarter earnings preview with an assessment of key messages in  AT&T and Verizon’s earnings releases.  Until then, if you have friends who would like to be added to The Sunday Brief, please have them drop a quick note to sundaybrief@gmail.com and we’ll subscribe them as soon as we can (and they can go to www.sundaybrief.com for the full archive).

Thanks again for your readership, and don’t forget to send in your use case for a “mobile first” event!  For those of you attending COMPTEL, I look forward to seeing you!  Have a terrific week!