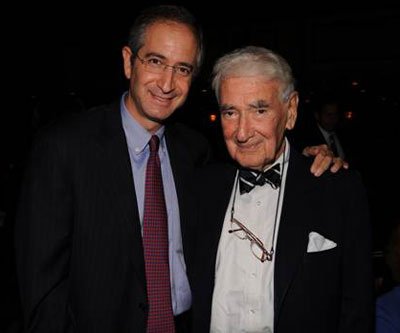 Fathers’ Day greetings from Austin and Dallas.  Today will be dimmer in Philadelphia with the passing of Ralph Roberts, the father of Comcast.  A Naval veteran with the ability to sell practically everything (eggs, golf putters, men’s clothing, and then cable television), Ralph defined the term pioneer.  During the period from 1963 to 1990 (when his 30-year old son Brian took the reins as President), Ralph Roberts led Comcast.  By 1990, it had become the country’s largest cable provider while investing in both wireless networks (Comcast Cellular) and content (QVC, The Golf Channel).  Comcast took an even bigger risk in 2001/2002 when they bought and successfully integrated the assets of AT&T Broadband into their current operation (further details of that transaction can be found in the 2001 press release here).  Ralph’s entrepreneurial energy and persistent optimism will be greatly missed, and his legacy will continue in the Philadelphia area as a result of decades of community support.

This week, the Federal Communications Commission voted 3-2 to fine AT&T $100 million for allegedly misleading customers about unlimited data plans.  Despite many news outlets calling this the first of many “Net Neutrality fines,” the largest fine ever imposed by the FCC deals with one of the only surviving portions of the 2010 Open Internet Order called the Transparency Rule (section 8.3).

In this section, wireless carriers are required to “publicly disclose accurate information about their network management practices, performance, and commercial terms of its broadband Internet access services sufficient for consumers to make informed choices regarding use of such services.”

The specific item in question is whether AT&T fully disclosed what the resulting reduced speeds would be when Unlimited customers exceeded the 5 GB (4G speed) or 3 GB (3G speed) cap (according to an article found here the speeds went from 5-12 Mbps to 512 Kbps for 4G customers and from 1.7-6 Mbps to 256Kbps for everyone else).  While AT&T did notify customers that their speeds would be reduced (including a nationwide press release, a front-page bill notice for all unlimited customers in 2011, text messages describing the policy to unlimited customers prior to being throttled, and detailed information in several areas of AT&T’s website such as that found here), they did not notify customers of the resulting throttling level.  The Transparency Rule clearly allows throttling, but requires disclosure of the new level.

AT&T is sure to appeal the fine and has already ended the practice of offering unlimited plans. One interesting side argument that is sure to be made by AT&T is whether information on the website acts as a disclosure mechanism (especially for those video-hungry customers who made up the top 3-5 percent of all data users during the 2011-2014 time period).  Those who experienced throttling were not shy to write about it in 2011, as this Android Central article describes.  In fact, Ars Technica did a full piece on specific carrier policies here in 2014, concluding that throttling “isn’t automatically a bad thing if it’s necessitated by limited bandwidth and done only when cell sites are so congested that heavy users would prevent lighter users from connecting at all.”  For a broader legal synopsis of the case, have a look at this commonlawblog.com article here.

This week, Sprint disclosed that it had changed its network policy (something we highlighted at the time it went into effect).  Previously, only customers who were defined as the “top 5% of all data users” would see their Internet speeds slowed, and that would only occur if there was congestion at the specific cell site in question.  Now, the policy is as follows (from Sprint’s website):

Allocating Resources During Times of Congestion: Despite its best efforts to prevent congestion through managing tonnage and directing customers to the best available network resources, the demand on a particular network sector sometimes temporarily exceeds the ability of that sector to meet the demand. During these times, Sprint relies on the radio scheduling software provided by Sprint’s hardware vendors to allocate resources to users. This radio scheduling software includes a set of generic fairness algorithms that allocate resources based on signal quality, number of users, and other metrics. These algorithms are active at all times, whether or not the cell is congested; however, during times of congestion, the algorithms operate with the goal of ensuring that no single user is deprived of access to the network.

Remember the term “generic fairness algorithm.”  As the Ars Technica article points out, this has not prevented Sprint from limiting video speeds on their network to 600 Kbps, although Sprint indicated that this policy is also undergoing changes. 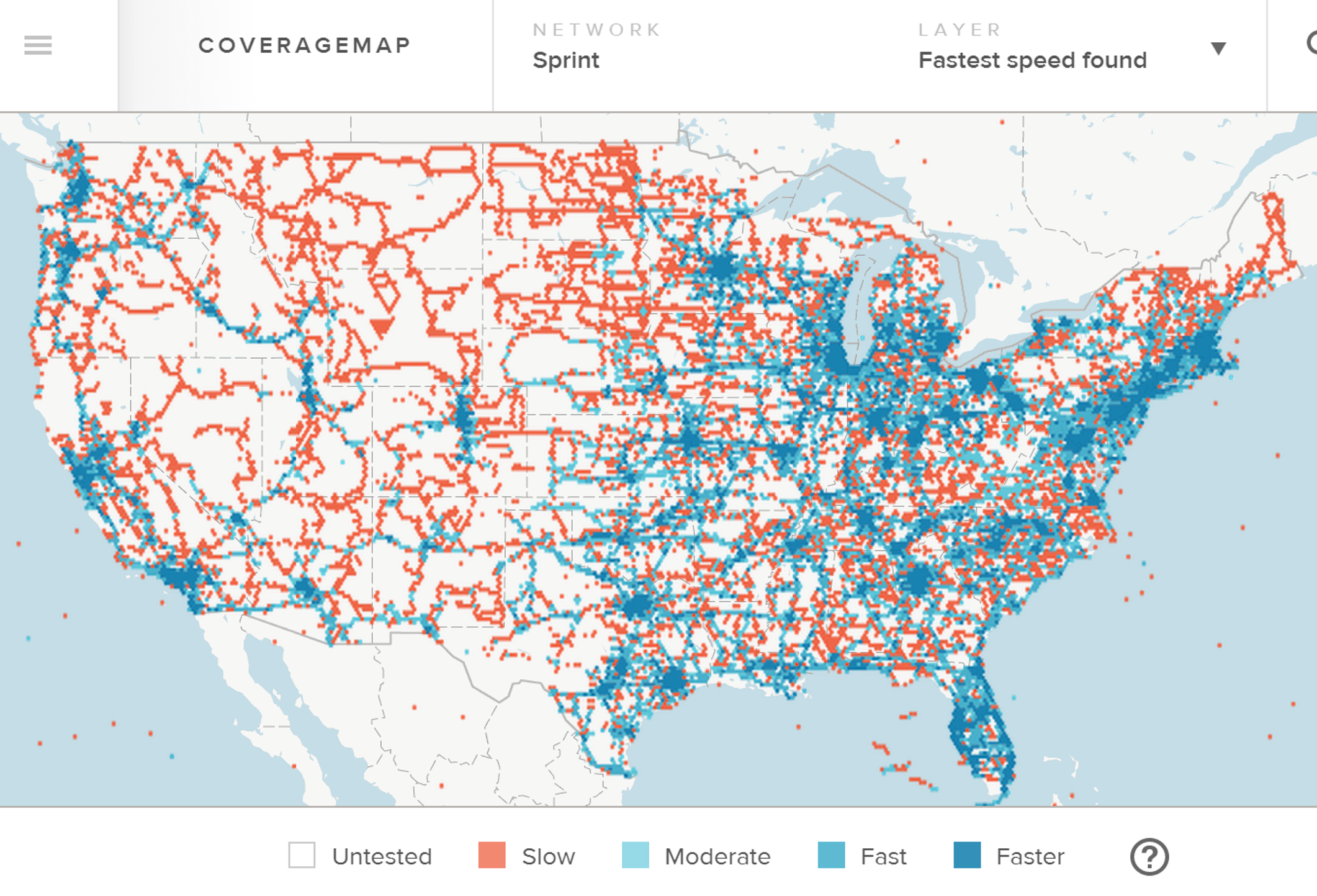 How this change to the network affects Sprint’s market share standing is not clear.  Judging from recent speed tests, however (see chart nearby for the latest RootMetrics assessment of Sprint’s data performance – more information for each carrier here), the role of algorithms (which presumes that there is enough provisioned spectrum and cell site backhaul for faster data speeds) may not play into the calculus in second and third tier markets (or the “in between” spaces along highways).  Sprint’s network capacity, and not a specific network policy, is constraining their ability to deliver competitive speeds and video experiences.

This is just the beginning of the FCC’s role in determining what is (or, in the case of AT&T, should have been considered in 2011 and 2012 to be) “fair and reasonable” network management.  Government scrutiny will do little to advance solutions to the complex issues surrounding the delivery of video services to mobile devices.  Increased regulation will, however, force wireless and wireline carriers to clarify the meaning of unlimited (specifically that a higher speed experience may not continue forever).

Last week, we discussed AT&T’s Southern shift into Mexico and cable/telco/satellite consolidation as a mechanism to increase bargaining strength when renegotiating content and retransmission agreements.  These trends are ones that will undoubtedly remain throughout the rest of 2015 and into 2016.

The next important trend is the continued momentum that T-Mobile has experienced in 2015.  It’s hard to believe that there was a time when T-Mobile was a distant fourth place wireless provider, but that statement could have been made as late as 2012 when John Legere took the helm of their US operation (one of my favorite articles of all time is this rant by a T-Mobile employee which appeared in Phone Arena in March 2012.  If that employee is still at T-Mobile, I think they would have to agree that three years has produced a lot of changes at the company).

As we have described over several Sunday Briefs, T-Mobile has a lot of things going for it:

If current trends hold, there’s no doubt that T-Mobile will be widely considered the third largest wireless provider after second quarter results are posted.  They are the belle of the ball, have 700 MHz capacity deployments remaining that will drive further market share gains, and are well positioned in segments and locations where local data performance and service reliability will be critical to market share gains.  It’s also very likely that T-Mobile will show increased profitability as a result of where they are in their customer lifecycle (most customers have converted to Simple Choice plans).

What T-Mobile’s German parent decides to do with their US subsidiary has generated recent press.  It’s important to note that their current balance sheet could accommodate several billion dollars of additional debt without significantly compromising its integrity.  This “grow alone” course needs to be weighed against potential alternatives.  Regardless, T-Mobile’s value is considerably stronger than anyone would have anticipated three years ago.  They are clearly in the driver’s seat.

Next week, we’ll touch on a couple more industry trends before taking a break for the Fourth of July holiday.  Until then, if you have friends who would like to be added to The Sunday Brief, please have them drop a quick note to sundaybrief@gmail.com and we’ll subscribe them as soon as we can (and they can go to www.sundaybrief.com for the full archive).  Thanks again for your readership, and have a great week!