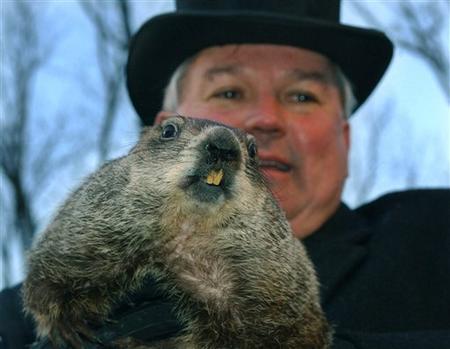 Happy Groundhog Day from New York City, Philadelphia, Washington DC and Dallas.  Spoiler Alert – there will be six more weeks of winter, and my Rocky Mountain friends are loving it (nearly three feet of new power in the past three days)!

This week was filled with earnings news.  Apple, Amazon, AT&T, Comcast, Google and Time Warner Cable all posted fourth quarter and full year results.  There isn’t enough time to discuss each of these reports in detail, but here’re several items to think about:

1. AT&T was not kidding in November 2012 when they indicated they were going to spend a lot of money on Project VIP.  After spending $25 billion in 2013 in cap ex and spectrum, AT&T announced that 2014 and 2015 would likely bring an additional $20-21 billion in capital spending – per year.  With an increase in taxes, this results in free cash flow of $11 billion for each of the next two years.  Assuming $9 billion or so of dividend payments, that leaves about $2 billion of cash to buy spectrum, other assets, or pay down nearly $75 billion in short and long-term debt.  Project VIP is one of the biggest bets ever made in American business history.   While we have written on the required returns on this incremental investment many times (see our October column called “AT&T’s $61 billion promise” here), the new revenues and profits required to make it a winner for shareholders are daunting.

2. Apple, Microsoft and Google have amassed over $300 billion in cash and marketable securities.  Google has nearly $59 billion, Microsoft $84 billion and Apple has over $159 billion ($118 billion of this is considered “long term”).   To satisfy a 10% cost of capital (and, since each of these companies has little debt, the likely expected return is higher than 10%), over $82 million in after-tax income is required each day.  Apple is stepping up its pace of acquisitions to use some of its excess cash, according to Apple Insider, but $525 million in acquisitions in the fourth quarter represents about 2 months of interest on $159 billion at a 2% annual rate.

Some of the cash on the balance sheets is held overseas to avoid double taxation.  A recent bi-partisan proposal to allow these companies to repatriate a portion of overseas cash (through an infrastructure investment vehicle) is making its way through the House and Senate.  More on these discussions and initial terms of the bills are found in this Financial Times article. 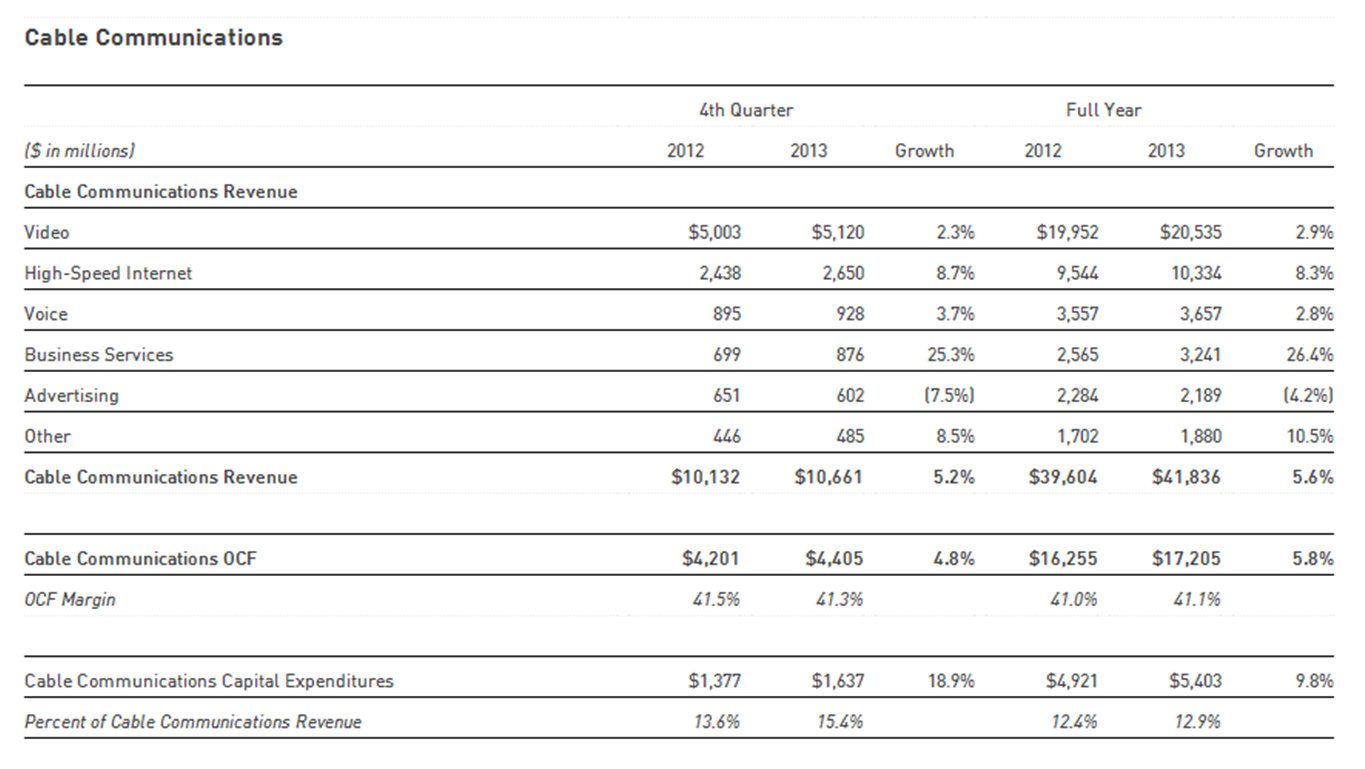 3. Comcast is really hitting its growth stride, and other companies are beginning to take notice.  Comcast announced earnings last Tuesday, and, with the exception of advertising spending, they posted great revenue growth across the board.  Of particular note is the growth of Comcast Business, who posted 25% growth for the fourth quarter and 26% growth for the year.  Said differently, Comcast Business comprised 8% of total company revenues for the fouth quarter but accounted for 33% of total revenue growth.  And this is not a low margin business.

To put Comcast Business’ size into perspective, they are more than twice the size of the largest independent CLEC, tw telecom ($1.5 billion in trailing twelve month revenues).  But Comcast’s annual revenues are still less than half the size of AT&T’s small business and alternate channels business ($6.98 billion), a clear signal that they have a long growth runway.  If the news reports are true that Comcast is willing to bid for the East Coast assets of Time Warner Cable (including New York City) as a part of a Charter/ Comcast joint acquisition, then the resulting footprint would prove attractive to East Coast enterprises who currently view Verizon and AT&T as the only viable choices.  (For those of you who aren’t up to date on your cable geography, Comcast would add New York City, Raleigh/ Durham and Charlotte to Boston, Philadelphia, Baltimore, (most of) Washington DC, Richmond, Atlanta, Jacksonville and Miami).

4. Amazon raises prices on their Prime service, and no one is surprised.  When companies raise prices every year, consumers get ticked off – just ask cable and satellite subscribers.  However, when Amazon announced a likely 25-50% increase in their Prime membership cost during their earnings call on Thursday, no one really blinked.  Here’s the full text from Tom Szkutak, Amazon’s CFO about the price increase:

We launched Prime in the U.S. nine years ago with free, unlimited two-day shipping on one million items in an annual membership priced at $79. Today Prime Selection is growing to over 90 million items.  Even as fuel and transportation cost have increased, the $79 price has remained the same. We know the customers love Prime as the usage of the shipping benefit has increased dramatically since launch. On a per customer basis, Prime members are ordering more items across more categories with free two-day shipping than ever before.  With the increased cost of fuel, transportation as well as the increased usage among Prime members we’re considering increasing the price of Prime between $20 to $40 in the U.S.

What a candid and frank assessment of the marketplace and the product.  Keeping everything out in the open is critical to retaining their estimated 19 million Amazon Prime customers.  However, as these two articles point out, analysts are as confused about what Prime represents as many of Amazon’s customers.  See the two different perspectives from CBS Marketwatch (a free shipping focus) and CNET (with a Netflix comparison). 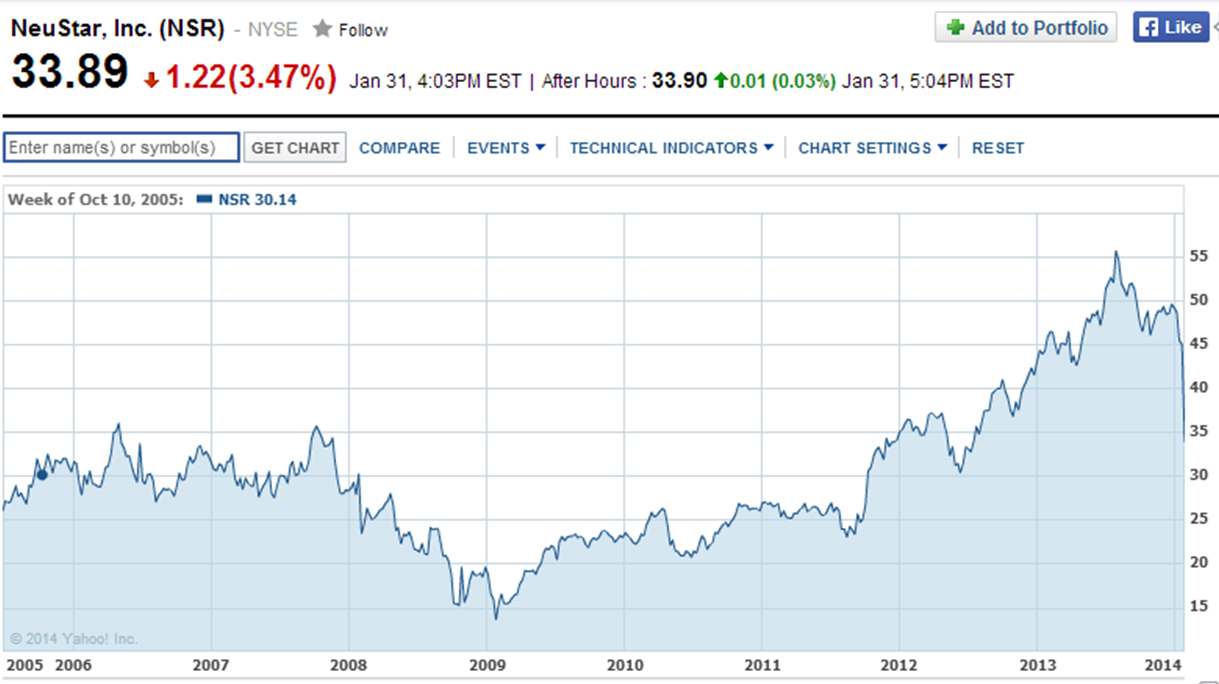 5. Neustar’s announcement this week shows how dependent companies (and their investors) can become on government contracts.  On Thursday, Neustar issued a press release indicating that their revised proposal to the North American Portability Management group submitted last October would not be considered.  This places the future of their Number Portability Administration Center management contract (which expires in July 2015) in jeopardy.   Even though Neustar has diversified in recent years (52% of total revenues are non-NPAC), their stock took a nosedive to levels not seen since July 2012.

On top of the earnings stories, there are a host of Super Bowl-related telecom stories, including Verizon’s demonstration of their LTE multicast capabilities (which feature Sequans chipsets.  Full disclosure – I am a mamber of the Board of Directors of Sequans) and also the revelation that clean-cut, no-cussing Tim Tebow would be the start of a “no contract” T-Mobile ad to run during the Super Bowl (the longer version of the ad is here).

But the big news of the week is from Time Warner Cable.  On a 90-minute conference call, the company delivered its counter-offer to the shareholders in the form of a three-year plan led by a comlete local infrastructure makeover dubbed  “TWC Maxx.”

Maxx consists of the following: 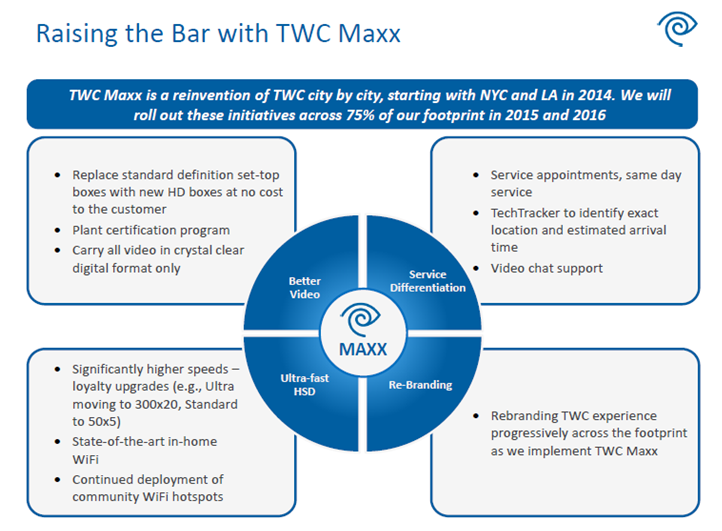 Like AT&T’s Project VIP, TWC Maxx is a “bet the company” strategy focused on delivering better infrastructure to homes and businesses.   But Time Warner’s new initiative goes a step further, replacing all of the critical equipment inside of the home (which will drive up consistency and drive down costs).  This will apply to digital conversions in Los Angeles as well as new HD boxes for every HD video customer.

In a follow-up announcement, TWC released the speed changes that will result from Maxx.  Most notably, Basic Internet, which is the most commonly ordered speed in the TWC Triple Play, will see download speeds increase to 10Mbps from their current 3Mbps (Comcast’s most common Internet package features 25Mbps and Charter’s tops out at 30 Mbps, although Comcast and Charter advertised Triple Play packages cost $10-20 more per month then the TWC $80 introductory offer).  However, the highest speeds will increase from 30 and 50 Mbps to 200 and 300 Mbps, presumably with no price increase.  These new speeds will make TWC’s wideband offerings much more competitive than anything Comcast or Charter have on the market.

This leads current Time Warner investors to ask “Which plan should we believe?”  Charter is promising better operational management, but the monthly figures Time Warner Cable shared (see above) clearly show a recovery.  The plan presented by senior management is aggressively growth-oriented, but may not fully consider the corresponding competitive response of a VIP-enabled AT&T.

Without a doubt, Time Warner Cable gave its current shareholders something to think about.  The plan they presented focuses on revenue growth through better networks and products, which, with the capital levels they project, will be welcome in markets such as New York City and Los Angeles.  But will a sweetened offer with a higher cash component be more attractive?  Can investors lock in a partial return on the tremendous (431%) stock price apprecition Time Warner Cable has had over the past five years?  It’s a question that will likely be answered over the next few weeks as Charter (perhaps with Comcast) is likely preparing a new slate of directors to affect a hostile takeover (see Reuters article here).

For more details and a full copy of Time Warner Cable’s presentation, click here.  The Seeking Alpha transcript of the conference call is here.

Next week, we’ll dive in a bit deeper to AT&T’s earnings and preview Sprint’s earnings announcement of February 11.  Until then, if you have friends who would like to be added to The Sunday Brief, please have them drop a quick note to sundaybrief@gmail.com and we’ll subscribe them as soon as we can.  Have a terrific week!