Is it Still an Android World? -11th Edition

June greetings from Austin and Dallas.  As many of us took a holiday break, news continued to generate over the past two weeks.  We’ll cover a couple of major developments as well as our semi-annual handset assessment in this week’s Sunday Brief. 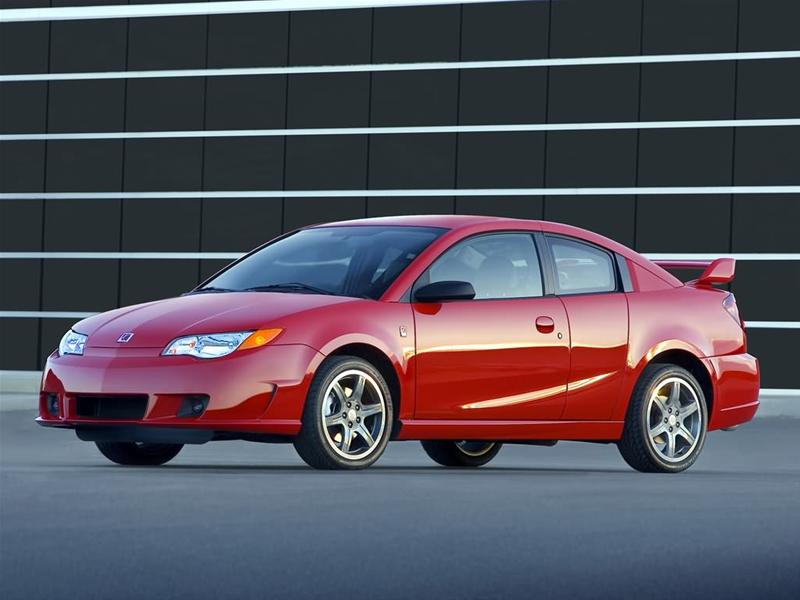 First, a shoutout to my friends at Blackberry with the boldest move over the past two weeks (and you thought it was the AT&T purchase of DirecTV – think again!).  At the O’Reilly
Solid Conference in San Francisco, Blackberry announced Project Ion, the “cornerstone of BlackBerry’s vision to offer end-to-end solutions for the Internet of Things.” While this is merely a temporary name, there is something about ION – just ask Sprint ($2+ Billion write-off from last decade’s Project ION – see article on Sprint ION’s demise here) or GM’s former Saturn division (Saturn ION shown in picture – article on Saturn’s brand departure here).  A bold move from Blackberry with a very unfortunate name – hopefully it turns out better for them than it did for GM and Sprint.

The Implications of AT&T’s Purchase of DirecTV

After the Sunday Brief went to press on May 18, AT&T announced that they were going to buy DirecTV for $95/ share (total purchase price, including DirecTV’s net debt will be $67 billion).  Their official announcement is here.  Many of you reached out to discuss the implications of this announcement on a) the Comcast/ Time Warner Cable approval process, and b) the potential merger of Sprint and T-Mobile (which, if this Reuters article is accurate, faces complicated regulatory hurdles).

1)      DirecTV brings an international, but not a European footprint.  AT&T has been looking outside the US (India, Europe, other areas) for the past three years.  AT&T knows the Latin American market well, thanks to their investment in America Movil (which they will be completely divesting as a result of this transaction).  Consumer-based television content in a strengthening Latin America is a terrific long-term play, and the DirecTV Latin America asset is a good starting point for a more comprehensive global strategy.

2)      DirecTV brings exclusive content to the table that can differentiate AT&T Mobility’s (and U-Verse’s) wireless offerings.  It’s an end run around Verizon Wireless’ NFL relationship.  Read the Verizon Wireless multi-year extension announcement here, and you will ask “How is this any different than NFL Sunday Ticket?”  The entire transaction is contingent on DirecTV renewing the Sunday Ticket relationship, which DirecTV executive Mike White indicated is “highly likely” by the end of 2014.  No renewal, and AT&T can walk away from the transaction.  That’s how important live sports content is as a differentiator in today’s telecommunications environment. (We’ll talk more about the importance of content in our three-part Sunday Brief strategy session starting next week).

3)      DirecTV is self-funding.  As we saw with the Comcast/ Time Warner Cable transaction, AT&T is purchasing a company with healthy free cash flow.  In the first quarter, DirecTV generated $880 million in FCF on a global basis, with the US segment generating over $1 billion in quarterly FCF.  DirecTV’s first quarter earnings announcement can be found here.

As we have discussed in previous Sunday Briefs (and will discuss over the next three weeks), AT&T seeks to create differentiation through a) integration (Content, High Speed Internet, Mobility), and b) exclusivity (iPhone, RAZR, NFL Sunday Ticket).  Their ability to generate $61 billion in shareholder value is directly dependent on being able to create competitive advantage in these two ways.  More on this in upcoming Sunday Briefs.

By One Metric, T-Mobile is Already #3 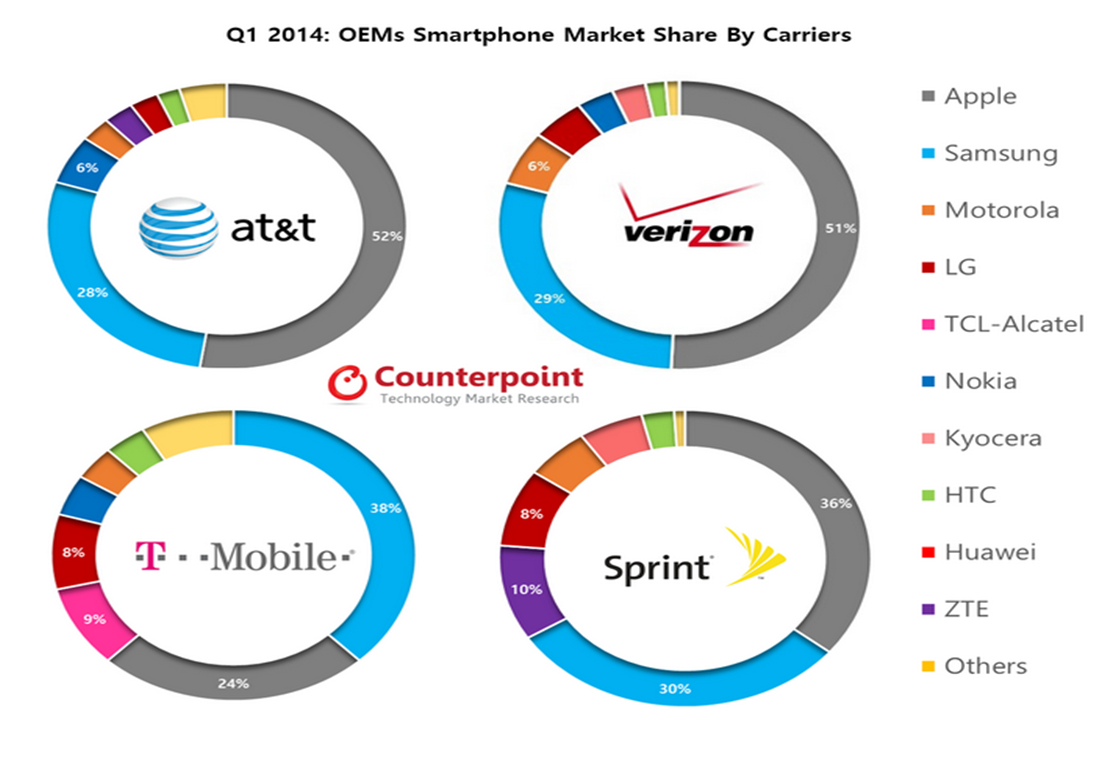 One of the more interesting analyses came out just before the Memorial Day weekend from Neal Shah at Counterpoint Research.  In his blog post, he reported that T-Mobile had overtaken Sprint as the third largest purchaser of smartphones, and closed a lot of ground with AT&T.  The chart at right shows the mix of devices for each of the carriers in the first quarter.  Shah concludes that TCL-Alcatel has now overtaken Huawei as the fourth largest phone (and fifth largest smartphone) provider, behind Samsung, Apple, and Nokia (and Motorola for smartphones).  This analysis is especially interesting as it implies that many of T-Mobile’s new customers are purchasing new handsets (and not simply swapping SIM cards) when they switch.  It’s also interesting to note that Blackberry’s volumes have been relegated to the “Other” category.

Is it Still an Android World?

Speaking of handsets, we have updated our semi-annual look at smartphone models by carrier.  There are many surprises and changes since we last analyzed the marketplace last October.  The research can be access here – it’s best to read the attachment in conjunction with the analysis below:

T-Mobile does carry the Google Nexus 5 and the Sony Xperia Z15.    And, they carry the Alcatel OneTouch Fierce and Evolve, which are two of their better selling smartphones.

The result of this strategy is that T-Mobile sells fewer iPhones as a percentage of their total devices (or others sell more because they have $0 iPhone 4s devices).  And they sell a lot more Samsung devices than Sprint (and perhaps as many Samsung devices as AT&T given the number of suppliers).

The implications of more sales across fewer SKUs are enormous:  Less inventory obsolescense, better informed in-store reps, focused customer service.  Winnowing the number of handsets offered to 16 while growing overall volumes is one reason to be optimistic about T-Mobile’s profit future.

The pendulum is beginning to swing back to the carriers.  While Sprint’s Spark network is still in its embryonic stages, having a consistent 20-30 Mbps experience throughout North Dallas and in most of Austin is a welcome customer experience (and can consume one’s total Wi-Fi Hotspot monthly allotment in one afternoon).  The ability to have widespread marketing of the Spark network happens when Apple builds tri-band into their next iPhone.  Today, Android devices are the only beneficiaries (see attachment for the ten Spark-enabled devices).  Until Spark-enabled devices are in the hands of every high-bandwidth data user, the congestion currently experienced in Sprint markets will not be alleviated.

However, Verizon’s XLTE network is equipped on every iPhone 5s and 5c, and pretty much every device they have introduced this year.  As we have discussed in several Sunday Briefs, Verizon’s AWS spectrum quantity leads to exceptional outdoor quality.  In Verizon’s ideal world, pairing low-band 700 MHz spectrum (to battle in-building issues) with AWS bands creates the best customer experience.  The XLTE advertising campaign turns the message back to the network, and it also informs their loyal Android, Apple, Windows, and Blackberry base that faster networks are ready.  The initial reaction to the network changes has been positive  – see here and skip down to the user comments section to see some of the bandwidth speeds achieved.

The implications of an installment-based wireless world are enormous.  Because the cost of the device has been detached from any subsidy, wireless handset makers will be increasingly pressured to deliver the most valuable devices.  Also, refurbished device availability is going to increase – dramatically – as the costs to upgrade faster have already been borne by the customer.  Finally, the price/ device bifurcation will provide some buffer against MRC penetration.  As we have noted, AT&T’s $160 for 4 device plan turns from $40 ARPU into $65-70 ARPU when AT&T NEXT is added.  As we will see with the migration to installment plans, the carriers have more ability to make money on low end/ end of life devices (as opposed to the “free phone” floor in today’s subsidy-driven model).

The handset world has changed dramatically in the past two years.  Samsung’s release of the Galaxy S III in May and June 2012 changed the handset world, and moved the Android operating system from “low end smartphone entry” to “broad based global competitor.”  The S III eliminated any chance for Nokia to be successful in the US, and Blackberry’s misses on the Z and Q series are technology case studies in market misunderstanding.  As the Counterpoint research shows this has allowed Apple and Samsung to drive 67% smartphone purchasing market share in the first quarter.

Next week, we’ll start our three-part strategic planning primer series (yes, the telecommunications community begins their strategic planning sessions in June and July).  The first part will provide a look at the tablet and connected device market across each wireless carrier.  If you have friends who would like to be added to The Sunday Brief, please have them drop a quick note to sundaybrief@gmail.com and we’ll subscribe them as soon as we can (and they can go to www.sundaybrief.com for the full archive).