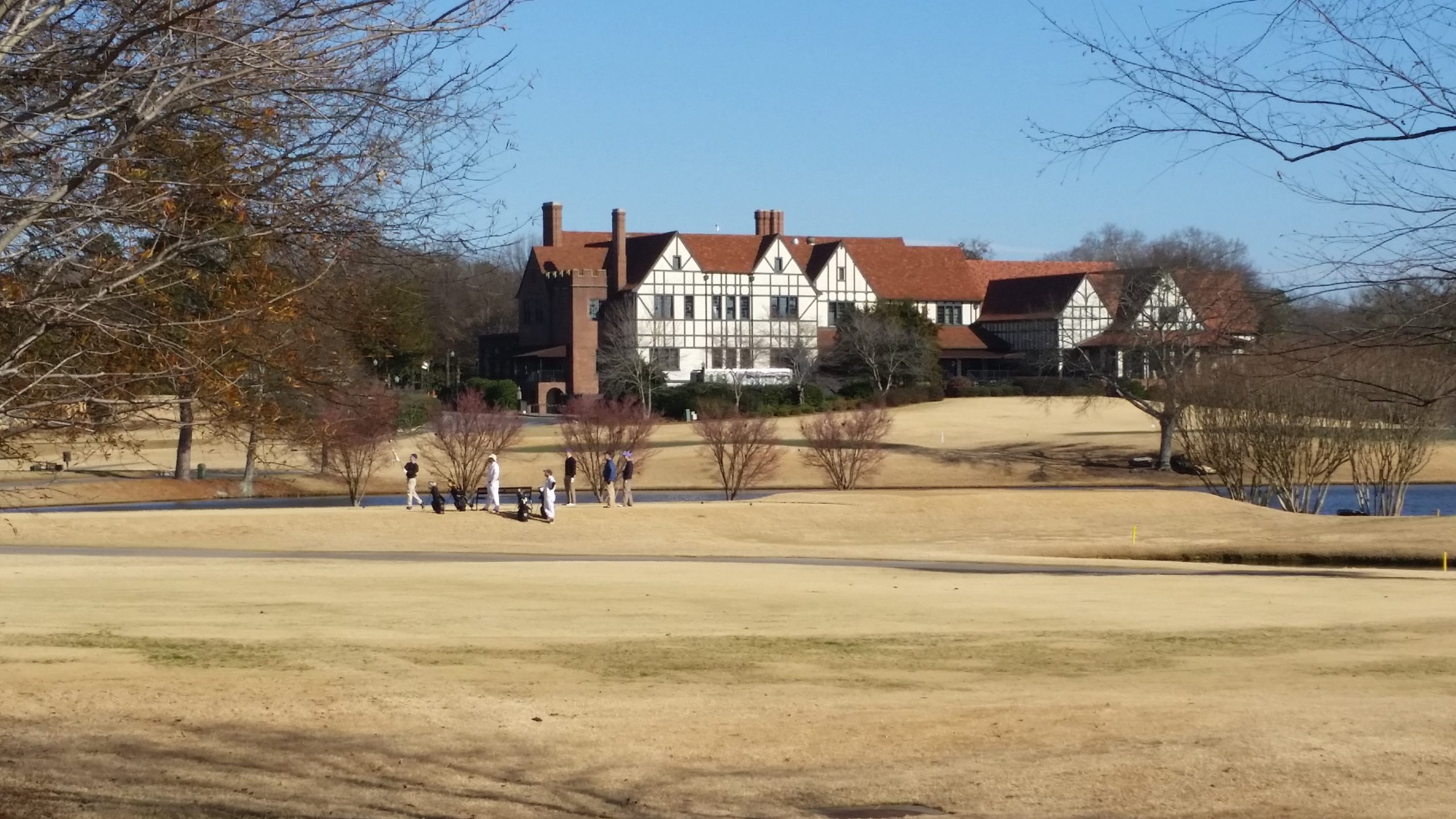 Holiday greetings from Atlanta (East Lake Golf Club pictured), Paris, and Dallas.  This has been an unusually active December for the telecom industry.  We’ll begin this week’s column with an assessment of recent events, and follow that up with three technology trends that warrant additional study.

Cisco, IBM and Others Say NO to Title II

First, a follow up to last week’s regulatory column (if you missed it, it’s online here): the Telecommunications Industry Association (TIA) weighed in this week with a very strong rejection of implementing Title II regulations as the solution for net neutrality.  In their short letter to the FCC and Congressional leadership, they state “Based on our experience and business expertise, we believe that our companies and our employees – like the consumer, businesses, and public institutions who depend on ever-improving broadband networks – would be hurt by the reduced capital spend in broadband networks that would occur if broadband is classified under Title II. Such a dramatic reversal in policy is unnecessary to ensure an open Internet.”  A full transcript of the letter is here.

The companies signing the letter include Cisco, Alcatel-Lucent, IBM, Broadcom, Qualcomm, Arris, Ciena, Corning, Imagine Networks, Nokia Siemens Networks, and Intel.  It’s no surprise that these firms would ratify this letter as the effects of a capital spending slowdown created by regulatory uncertainty are understandable and apparent.

The letter got me thinking about who has not weighed in (publicly) on the President’s recommendation to implement full Title II for both wireless and broadband providers.  What if Apple said this was a bad idea?  Google?  Samsung?  Amazon?  There is no doubt that decreased investment in networks would impact handset and Chromecast/ Apple TV/ Fire TV sales, and there is no doubt that all of these companies could afford to pay the associated tolls in a preference-based environment.  I think a joint letter by one or more of these providers suggesting an alternative to the current Administration’s recommendation would be welcome and “put a fork” in the Title II momentum.

Meanwhile, the new Senate leadership is looking at legislative solutions that will survive future court challenges.  Senator John Thune from South Dakota, the future head of the Commerce Committee, told Bloomberg BNA this week that he is “very interested” in finding a legislative solution for net neutrality that would avoid Title II.  Things appear to be moving in the right direction.  Hopefully someone will pass on to Senator Thune last week’s Sunday Brief.

Bidding has slowed to a trickle in the recent BWA auction (affectionately known as Auction 97), although the $43.6 billion in current winning bids has exceeded most expectations.  For those of you who do not follow the industry’s spectrum activity, the FCC is putting one 10×10 MHz block (commonly referred to as the “J Block”) and three 5×5 MHz blocks (commonly referred to as the “G, H, and I Blocks”).  Dan Meyer authored a terrific summary of key markets in RCR Wireless this week which includes a very interesting video from Spectrum Financial Partners comparing this auction’s process relative to others.

Although the winning bidders have not been announced, T-Mobile showed their hand on capital needs in part this week with the issuance of 17.4-20.0 million shares of mandatory convertible preferred stock.  The terms, as described in their press release, are as follows:

Unless converted earlier, each share of Mandatory Convertible Preferred Stock will convert automatically on December 15, 2017, into between 1.6119 and 1.9342 shares of T-Mobile’s common stock, subject to customary anti-dilution adjustments, depending on the market value of T-Mobile’s common stock on that date. Dividends on the Mandatory Convertible Preferred Stock will be payable on a cumulative basis when, as and if declared by T-Mobile’s Board of Directors, at an annual rate of 5.50% on the liquidation preference of $50.00 per share, on March 15, June 15, September 15 and December 15 of each year, commencing on March 15, 2015 and to, and including, December 15, 2017.

It’s important to note that none of these proceeds will be used for Auction 97, but bringing this offering to market in December definitely shows that their capital needs for 2015 are going to be great.  In fact, T-Mobile’s CFO, Braxton Carter, said at an investor conference this week that T-Mobile is looking at private spectrum purchases as opposed to mid-band purchases.  Judging from this chart of T-Mobile’s current (magenta) and proposed (color coded by seller) 700 MHz spectrum, courtesy of Fierce Wireless and AllNet Labs, they have a lot of key markets left to cover. 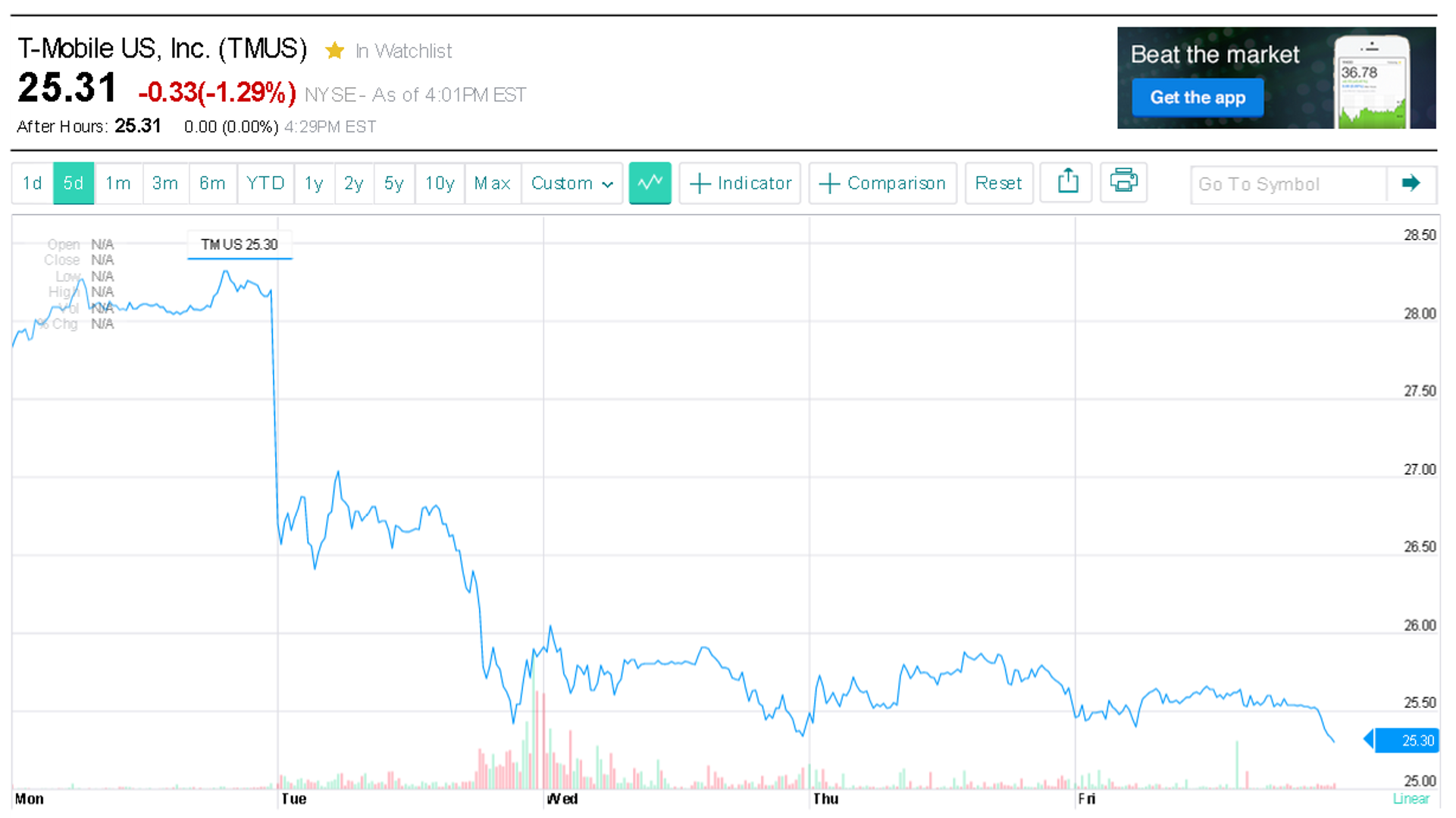 T-Mobile will likely generate $1.7 billion or more in EBITDA this quarter if analyst estimates are correct.  They will have another $1 billion in net proceeds from the mandatory convertible stock.  They have committed to cover more than 300 million POPs with LTE by the end of 2015.  Bottom line: The monies raised are going to fund the next Un-carrier move (likely announced in January) and existing low-band acquisition and readiness, not the mid-band AWS auctions.  As Braxton Carter stated, the timing was “definitely not optimal” given Verizon’s earnings warning issued during the prior week, but there’s something big afoot at T-Mobile and it’s not Auction 97.

Softbank Moving Out of Silicon Valley

In one of those “you probably missed this” articles, Reuters announced this week that at least half of the real estate SoftBank leased in Silicon Valley is up for a sub-lease, representing a $3 million annual savings for the company.

This is significant for several reasons.  First, it cements the headquarters of Sprint in the Kansas City metropolitan area (Overland Park, KS is a suburb of this bi-state metro).  Marcelo Claure has been adamant that his leadership team live and work in the City of Fountains.  Combined with the mid-level management changes that are moving a lot of network accountability to regions, Sprint’s organizational structure will look a lot more like Verizon’s (which most view as a good thing).

Second, this is a win for management control of the company.  “Japanese influenced, but not run out of Tokyo” was how the current structure was described to me by a former Sprint senior executive.  With many initiatives simultaneously underway to grow revenue and reduce costs, creating a hometown anchor will go a long way with the remaining employee base.

Several of you have asked me about key technology trends for the next year.  Here’s three that will be on my reading list and I hope will be on yours:

Plenty of technical reading to fill your holiday vacation.  If you have other suggestions or better articles to recommend, please send them and we’ll update the www.sundaybrief.com website with your picks.

Next week, we’ll share the first half of the Top 10 Events of 2014.  While several dozen of you have already submitted your picks, we could use your input.  Please submit your responses to sundaybrief@gmail.com (all responses will be anonymous) and we’ll publish the results.  Until then, if you have friends who would like to be added to The Sunday Brief, please have them drop a quick note to sundaybrief@gmail.com and we’ll subscribe them as soon as we can (and they can go to www.sundaybrief.com for the full archive).