Wireless Pricing Dynamics- What Happens Next?

Happy February from Paris (France), Houston, and Dallas.  This has been a very dynamic week in the telecom industry as events unfolded on multiple fronts.  To last week’s Sunday Brief (Time Warner Cable), it is rumored that Charter will run a separate slate of directors to be nominated to Time Warner’s Board.  This should happen next week.  While Charter has not raised its offer for TWC from $132.50 , a recent The Wall Street Journal (subscription required) article suggests that the bid would need to be raised to support many TWC investors.  Another interesting dynamic to watch next week is to see if Comcast endorses any Charter Board slate announcement.

On the spectrum front, AT&T announced that it would be purchasing AWS spectrum from Cable One.  20MHz is a healthy dose of spectrum for most of the Cable One coverage footprint (the FCC filing did not go into details on which properties were covered by the announcement, but Cable One’s cable footprint covers areas such as Winslow (AZ), Joplin (MO), Boise (ID), Sioux City (IA) and Texarkana (TX/AR).   For a complete view of Cable One’s wireline holdings, the FCC map can be found here.  Combined with AT&T’s January spectrum purchase announcement with Aloha Partners (which covered 50 million population in fourteen states), AT&T is putting together a very strong AWS spectrum position. 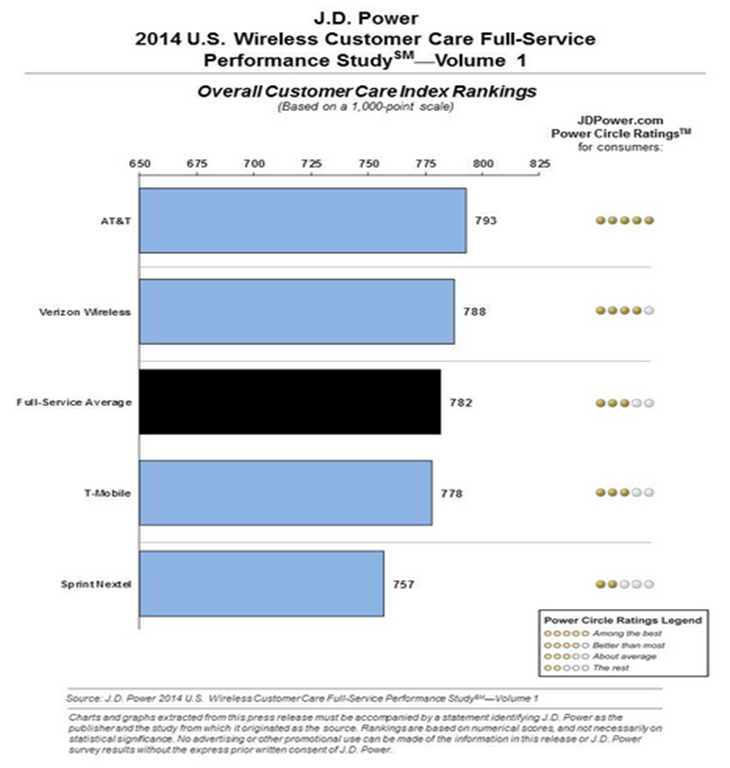 This week’s J.D. Power press release had some additional good news for AT&T, finding them slightly ahead of Verizon Wireless on wireless customer service.  This is the second time this year that AT&T has won the J.D. Power customer service award.  The chart at left also spells some troubling news for Sprint, whose full service rankings were basically identical to those of Metro PCS (now a T-Mobile brand).  The last finding in the report did not go unnoticed by one of the Patterson Advisory Group clients (StepOne).  It says that “More than one-fourth (26%) of the re-contact calls lasting more than 25 minutes are the result of a previous customer contact that was not resolved either by visiting a retail or carrier website.” The integration of web and care has a long way to go, and StepOne has an extremely innovative way to bring contextual care to customers and alleviate many of those long-duration calls.

This big news this week (which was technically announced on February 1) was AT&T’s introduction of their new family/ small business plan pricing structure.  AT&T has organized this new plan structure around 10 GB of shared data, which could be divided between ten lines (all plans include unlimited voice and text).  There is no throttling after 10GB – additional data charges of $15/ GB are applied.  There are also no individual line limits or allocations – the teens in the family could use 3GB each and not be throttled.  Their messaging is simple – bring a family (and their devices) to AT&T, get a $40 plan per line (for four lines) that will likely cover data needs for most families, and get a $100 bill credit for every line you bring.

When a customer goes to www.att.com to sign up, things get a lot more confusing.  The simplicity contained in the news release is replaced by a conucopia of options:

Instead of one plan bundle, the customer now needs to choose each component (I am hoping this is an easier task in-store or through the phone).  Then, the customer is presented with a new question not outlined in the news release – will your family really use 10GB of data every month?

This seems like a subtle point, but charging different voice/text rates based on the amount of data families use is confusing to the customer.  Furthermore, if a customer chooses 8 GB of data (across four lines), their bill will be $30 higher ($190/ mo.) than if they had chosen 10GB with the same four lines.  In fact, a 4GB shared plan costs more ($170/ mo.)than a 10GB plan.

The complexity does not stop there.  If you are a current AT&T customer, you are not eligible for a bill credit.  But if you leave AT&T (for T-Mobile), and return to AT&T in six weeks, then a new credit will apply for every line activated.  Termination fees covered by T-Mobile, and bill credits issued by AT&T.   This is the “new world order” for wireless.

The Bottom Line:  Ignore AT&T’s confusing website – it’s all about 10GB of data and four lines of unlimited voice/text for $160/ mo.  It’s a lot of data for four lines today, but probably not a lot in a year or so.  To the average family, that will look enough like “unlimited everything” to come to a $40-unlimited-per-line conclusion.  To AT&T, the Mobile Value Plan customer looks like a “subsidized” $65 ARPU customer (see table above), which is line with their current postpaid ARPU of  $66.35.  Not much changed, yet everything seems to have changed.

How will other carriers react to AT&T’s new plans?  That question was partially answered by Sprint this week, as Boost Mobile introduced new plans at $35/ mo. which feature unlimited talk/ text and 2.5 GB of unthrottled LTE data.  That rate goes up to $50 after the six month promotion has ended.

Virgin Mobile, another Sprint prepaid brand, already offers a 2.5 GB data plan for $35 that includes 300 voice minutes.  They are responding by lowering the entry point of mobile devices (neither Virgin nor Boost offer the “zero down” T-Mobile plan), with new CDMA-capable iPhone 5s devices selling for $440, a full $210 lower than Wal-Mart’s Straight Talk phone price.

Most importantly, Verizon has not responded with any family plan changes.  Wireless Week ran a story on Friday outlining a win-back/ loyalty offer that has been cited on several Verizon Wireless service blogs this year.  It’s unclear how well known the $60 unlimited voice/text + 2GB of data offer was to current Verizon customers prior to the article, but it’s a lot better publicized thanks to their article.

Verizon will have to respond to AT&T’s offer.  Network coverage and speeds are very similar for the two companies, and, while Verizon and AT&T use networks with different underlying technologies (here a SIM-card swap is not possible; it is for AT&T customers switching to T-T-Mobile).  My prediction is Verizon will resurrect their “double data” plans, creating a $240/ mo. plan for 4 unlimited smartphones and 12GB of data.  That $240 contains subsidized devices, creating a “comparable” plan for AT&T’s Mobile Value Plans of $140-160 ($20-25 of embedded subsidy per month).

Verizon could also include a pay service in their higher data usage bundles, such as Pandora One or Spotify’s Premium Package.  Or they could respond with a deeper discount for customers who bundle their FiOS and wireless services, especially for family plans (e.g., $30 combined bill discount for all family plans of four lines or more).  While this promotion would have a limited impact to their base, it would solidify a “Verizon One” message.  (So would 2GB of unrated VZW streaming per month of FiOS content to any Share Everything device).

My money is on a Verizon Wireless Double Data promotion.  The plan is already in loaded into Verizon’s systems and service reps know how to offer it in stores and over the phone.  Whether it’s as generous as described above is anyone’s guess, but Double Data would create substantially less confusion than AT&T’s Mobile Value Plan and dramatically improve usage and retention.

At the end of the day, there are three foundational battles being fought on wireless plan pricing:

The first shots in this battle came from T-Mobile last March with their launch of Simple Choice plans.   AT&T has (finally) struck back, and Verizon will likely follow.  The “new normal” is $40 per line for four lines of unlimited voice/text and 10 GB of shared data (and no device subsidies).  Sprint will likely provide a Framily plan update when they announce earnings this week, and further Sprint-branded changes are likely to come soon.  We are just getting started on family plan pricing changes.

Next week, Sprint will announce earnings and round out the overall “big 4” wireless picture.  There will be a lot to discuss after that announcement.  Until then, if you have friends who would like to be added to The Sunday Brief, please have them drop a quick note to sundaybrief@gmail.com and we’ll subscribe them as soon as we can.  Have a terrific week!