Wireless Pricing Battles Heat Up (and other Events of the Week) 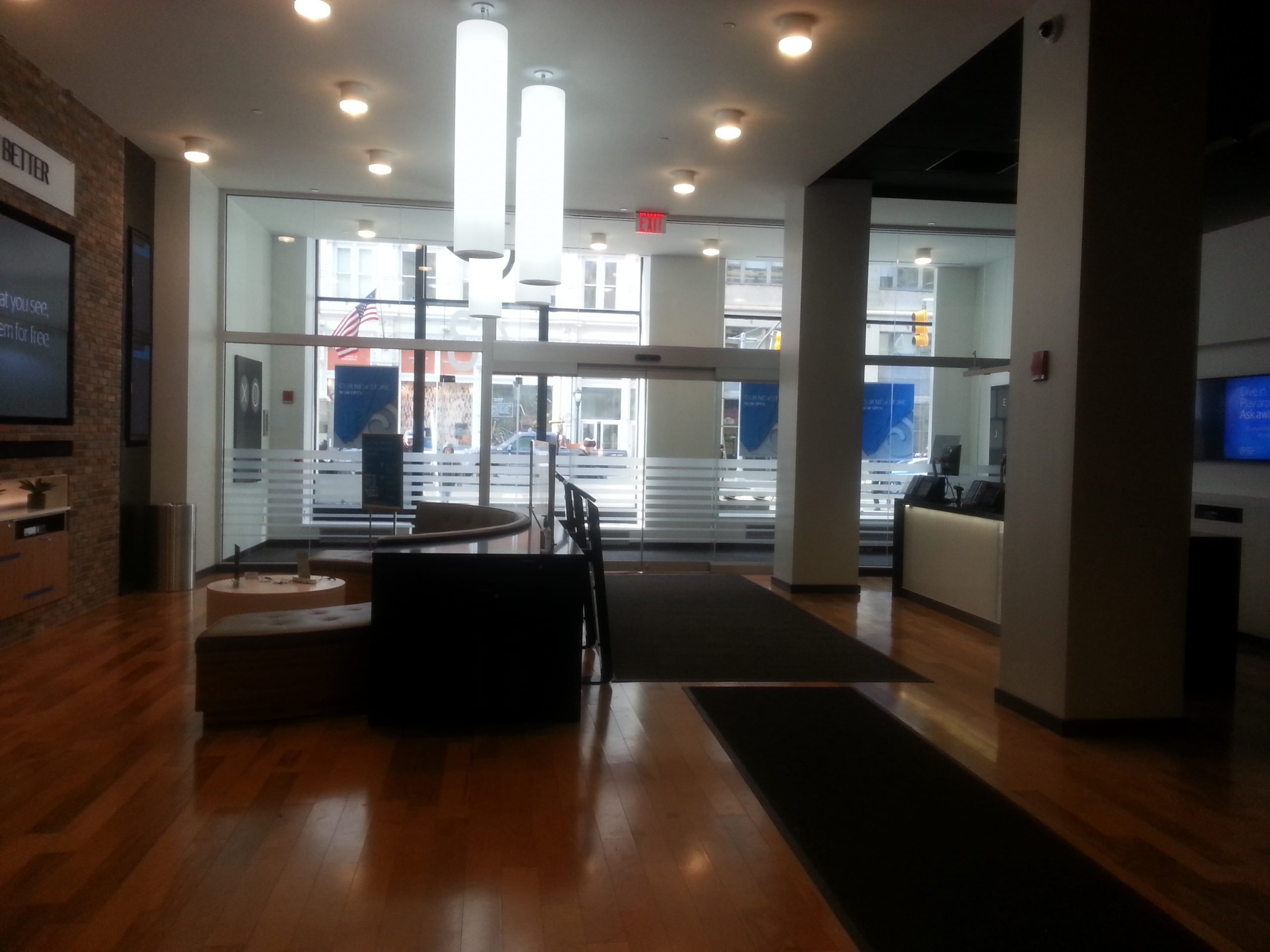 “Laissez les bons temps rouler” greetings from New York City, Austin, Atlanta, and Dallas (the picture is of the newly renovated Time Warner Cable store on 23rd street in New York).  It has been an eventful week in the telecom industry with each change supplementing three broad themes developed in previous Sunday Briefs:  a) the critical nature of data value to each wireless segment; b) the inertia pullling over-the-top content into the home through High Speed Internet connections; c) the role of scale (alone) in determining broadband and wireless winners and losers.

AT&T Responds With Another Pricing Change.  So Does T-Mobile. 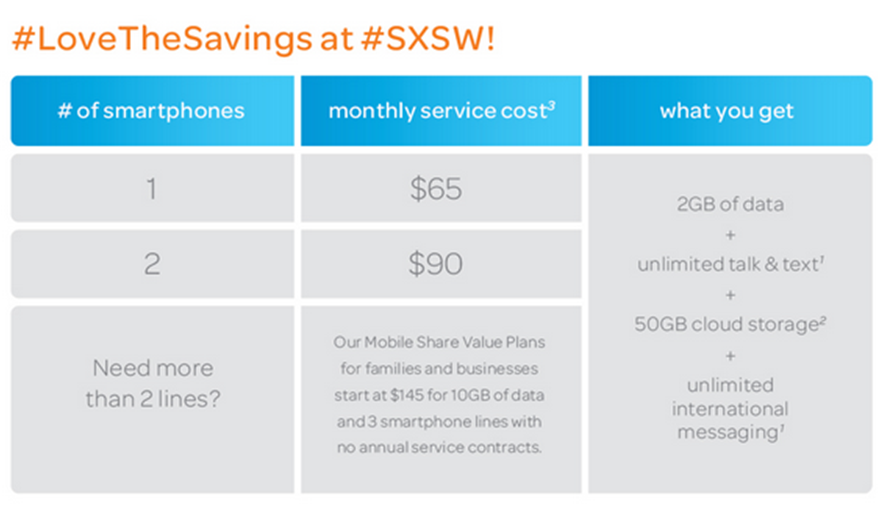 While you were resetting your clocks, AT&T was resetting their low-end pricing plans for smartphone users.  This change at the low end follows AT&T’s very successful introduction of $160 family plan bundles (unlimited voice/text, and 10 Gigabytes to share across four lines).  AT&T’s new plans incorporate unlimited voice/ text and 2 Gigabytes of data to share for $65 dollars for one line and $90 for two.  Both plans require the customer to cover the cost of the device, either through a one-time payment or participation in AT&T’s “pay by the month” programs.

Pricing changes are occurring quickly as we exit the quarter, especially between T-Mobile and AT&T.  The ultimate effect of these plans on Sprint and Verizon is not clear.  What is certain is that consumers expect rate plan prices to fall, and are willing to trade off smartphone subsidization for lower data rates.

But What About Network Quality?  RootMetrics Data Declares A Network Winner. 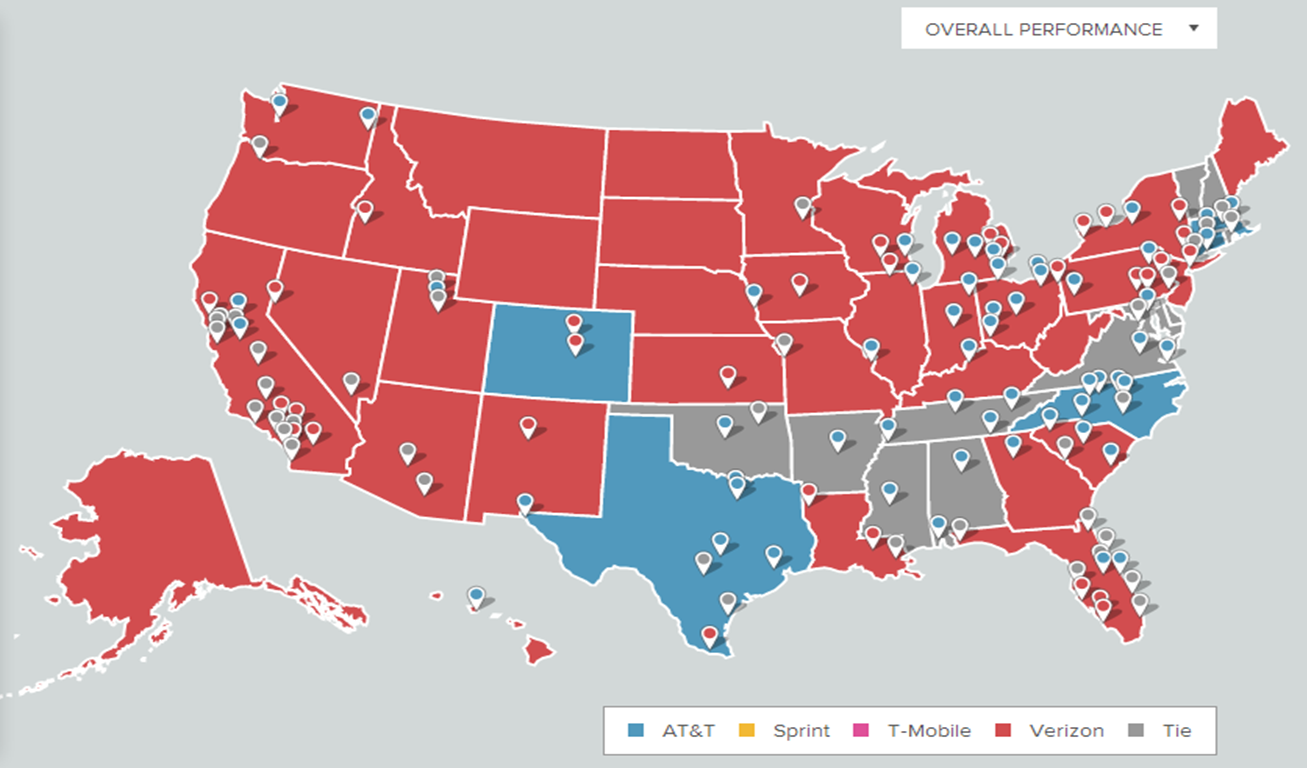 After the dust has settled on pricing plan changes, consumers will increasingly ask “What about data speed consistency?”  On Thursday, the RootMetrics team released a thorough review consisting of “4.6 million test samples, 6300 indoor locations tested, and 218,000 miles driven.”  These reviews were all performed in the second half of 2013 (networks are a lot different in January than they were last July).

The winner(s) are Verizon Wireless and AT&T, as the included chart shows.  AT&T won Texas, Colorado, and North Carolina and managed to battle Verizon to a tie in most of the Southeast.  AT&T also won several cities within states where Verizon Wireless was declared the winner (see Georgia, where AT&T won Atlanta but did not win any other city in the state).

Sprint and T-Mobile, who were in the process of completing their LTE networks when the tests were being taken, did not fare as well, particularly in buildings.  This is why there is a lot of activity across the board to improve consistency between indoor and outdoor experiences.

While the results of the second half 2013 testing showed two tiers of networks (Verizon and AT&T scoring in the mid to upper-80s on a scale of 0-100; Sprint and T-Mobile in the mid-60s), recent results have shown a tightening of scores.  Here are the results from Minneapolis, released last November:

The question becomes “How much more money are consumers willing to pay for faster speeds, consistent throughput, and broader coverage?”  AT&T is betting the answer is $10-15/ month per subscriber, with Verizon’s figure nearly double that.  The answer to this question determines the future of the wireless industry.

While the wireless carriers are engaged in a pricing battle, the folks at Comcast and Time Warner Cable were notified that Reneta B. Hesse (and not Bill Baer, the current head of the DOJ’s anti-trust division) will lead the investigation.  According to this New York Times article, Ms. Hesse “guided the FCC’s investigation of AT&T’s proposed takeover of T-Mobile.”

To the extent that having someone who can delineate the differences between large mergers is important (the AT&T/ T-Mobile merger would have created concentrations of subscribers and spectrum in many metropolitan areas), Ms. Hesse’s leadership will play a critical role.  However, the team investigating the proposed merger usually begins with a theme (or bias).  It’s hard to see this administration beginning with a “bigger is better” bias.  As many of us have discussed, it’s going to be a lengthy investigation and likely one where new precedents are created (as opposed to the enforcement of current anti-trust laws).

Coincidentally, David Cohen of Comcast continued his vigorous defense of the merger this week with a wide-ranging interview with Fortune magazine.  As he correctly pointed out (and as we described in a previous Sunday Brief), many in the industry have confused the private network arrangement with a substantial consumer of low-latency bandwidth with the core net neutrality concept of open access.

The approval process of the Comcast/ Time Warner Cable merger is likely the most-watched regulatory event of 2014 (and likely 2015).  David Cohen is a master strategist who guided Comcast through the NBC Universal investigations (a vertical merger).  Despite the rhetoric, there’s an argument that NBC Universal was a tougher case to defend than the horizontal merger being proposed.  Absent the creation of new anti-trust precedents (which is always a possibility), expectations of thrilling drama are likely to go unmet.

Speaking of Drama, What’s Going on at Sprint?

Two articles help to shed some light on what’s behind the changes.  The first appeared several weeks ago in The Kansas City Star, the newspaper of record for Sprint’s hometown.  In this article, Masayoshi Son describes the situation:

“Sprint has gotten used to being a loser. It is perpetually stuck in third or fourth place in the U.S. telecommunications market. Some say the poor quality of its networks explains its position. This kind of excuse keeps Sprint from breaking the vicious cycle in which it is caught.”
“Without the correct leadership, even a company with capable managers and hard-working personnel will not be able to reach the top tier,” Son said. “This is why I sometimes yell at Sprint executives.”

While there is truth to Mr. Son’s comments (When I was an executive at Sprint, the Wholesale Groups’s rallying cry was to “beat our competitors every hour of every day, and beat the budget.” This mantra was not endorsed by many of my peers.), it’s disconcerting to see Son’s publicly demotivating approach, especially for someone who has a long-term view of the industry.

Sprint has been shackled since the Nextel merger.  The $25 billion investment by Softbank was a godsend to the company.  However, asking the recently recovered patient to win the next sprint courts an irresponsible risk.  As this article from The Wall Street Journal describes, this new approach has changed the way employees prepare for meetings:

Defenders of Mr. Son say he congratulates as often as he criticizes, occasionally hugging employees. Outbursts are normal, and the continuing turnaround effort at Sprint is a joint effort with input from Sprint and SoftBank, say people at both companies. One sign of progress: Managers now prepare for every meeting as if Mr. Son is going to ask the question they are most afraid of, according to people at Sprint and SoftBank.

The question Sprint is most afraid of is simple:  “Now that we have the capital, can we beat AT&T and Verizon?”  This will involve a mix of local network knowledge and accountability (combined with a complete end-to-end view of performance data), increased customer focus (including broad partnerships to meet wired and wireless needs for business customers), and a culture change focused on daily (or hourly) success.

Winning is possible, but the shot clock is running out and T-Mobile is on a three-point streak.  Play selection is critical.   Find a way to motivate, and victory is yours.  Focus on criticizing previous decisions, and the team falls apart.

Next week, we’ll talk more about events shaping our industry including the recently announced agreement between Disney and Dish Networks.  Until then, if you have friends who would like to be added to The Sunday Brief, please have them drop a quick note to sundaybrief@gmail.com and we’ll subscribe them as soon as we can (and they can go to www.sundaybrief.com for the full archive).  Have a terrific week!