Why May 15 Matters to Telecom 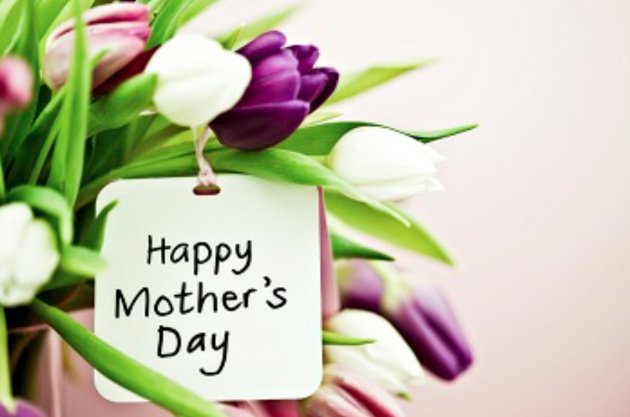 Mother’s Day greetings from Austin and Dallas, and many thanks for the myriad of comments about last week’s Sunday Brief.  RCR Wireless (I am an advisor to Arden Media, parent of RCR) picked it up (see article here) and it ended up being one of their most popular articles of the week (21 reposts on LinkedIn which I believe is a Sunday Brief record).  There are dynamic changes in the telecommunications marketplace right now, and while many of you like to focus on single company/ industry earnings, there are many intersections occurring between non-traditional competitors.

Before going into a discussion of the upcoming FCC meeting on May 15, many of you have asked me why we publish this column for free.  The “this could be monetized” e-mail comes every week or two from one of you.  For a more detailed description of why I write this column, click here (it was covered in a Sunday Brief about a year ago).  This column will never be a paid subscription service – period.

However, if you would like to help out a cause that Martha (The Sunday Brief editor, wife of 19 years, and Mom) and I care very deeply about, I would ask you to consider buying one of these baby sari quilts  the next time you have to attend a baby shower or provide a gift.  There’s a terrific story behind each quilt, and it’s highly likely that they will not be returned (and will be well used).

Why May 15 Matters to Telecom

There are few larger convergance points between broadcasters, wireless service providers, public safety providers, and Internet businesses than the Federal Communications Commission.  We have taked extensively in this column about the FCC’s role in determining rules about access to content and how it flows from host server to end user.

Another very important role of the FCC is to manage and conduct spectrum auctions.  In 2015, it is expected that the FCC, in conjunction with broadcasters, will auction off approximately 50-120 MHz of spectrum in the 600 MHz band.  This auction will likely determine whether a third mobile network can compete with network parity against Verizon Wireless and AT&T.

In order to have a successful auction, the FCC has to have three parties actively participate:

On May 15, the Commission will hold an Open meeting.  Three of the four topics are critical to the parts of the telecommunications industry that we cover in The Sunday Brief:

Just having one of these topics on Thursday’s agenda would be significant.  But all three topics makes for a landmark meeting.  Distinguishing between neutral accessibility and equal performance will have the greatest impact on the current landscape.  We have written (and there have been numerous side bar email communications) on the difference between accessibility and performance, and there is a lack of trust that any regulation established will be able to be effectively monitored and maintained.  The goal to foster innovation is clear, but whether this innovation applys both to software (the next Facebook) and network (the next Comcast) ecosystems has not achieved consensus within the communications community.  With the establishment of limited “HOV” lanes for the Internet, broader and faster developments will be possible, and the risk inherent in overbuilding today’s duopoly will go down, especially in more populus areas.

There continues to be a lot of skepticism that Comcast, AT&T, and others will reinvest Internet access revenues into their networks.  This skepticism drives the desire for additional suppliers, which is the point of proposed rules surrounding the 600MHz bidding process.

Over the past several months, the FCC has been designing the auction framework.  In mid-April, Re/Code published an article describing the latest developments in the process:

Determining the rules of any auction are critical, but this one is especially important because it will drive the quantity of broadcast spectrum to be repackaged.  For example, if 70MHz is the target auction level for Los Angeles PEAs and 30 MHz of this is to be reserved, some broadcasters might hold on participating (thinking that the reserved bidders will end up paying less for 43% of the spectrum).  If, however, only 20MHz was the target level to be reserved, the probability of reaching the target auction level would be higher.  This is one example of the clarifications that the Commission will need to provide to maximize the value of the auction.

Needless to say, both AT&T and Verizon are not excited about cordoning off spectrum that could create a lower cost structure for a potential competitor.  AT&T’s reaction can be found here.  They argue that, at a minimum, two 10 MHz bands are needed for an LTE deployment.  Failing to provide at least 40 MHz for two unreserved deployments would render the auction useless for either AT&T or Verizon (and, per AT&T’s understanding of the rules, they would not eligible for the reserve auction in approximately 70% of the country.  AT&T also implied that, without rules changes, they would need to reconsider their participation in the auction, but have since walked back those comments).  As discussed above, Verizon’s recent comments have been much sharper.

Could a darkhorse spectrum buyer emerge from the reserve process, perhaps led by John Malone, Craig McCaw, or another experienced industry pioneer?  Will the maximum limitation of the reserve spectrum (30MHz) be enough to facilitate pairing with unreserved spectrum?  Will the addition of spectrum cap rules cause broadcasters to be so discouraged that many of them decide to forego this round of auctions?  The answers to these questions should be answered at Thursday’s meeting. 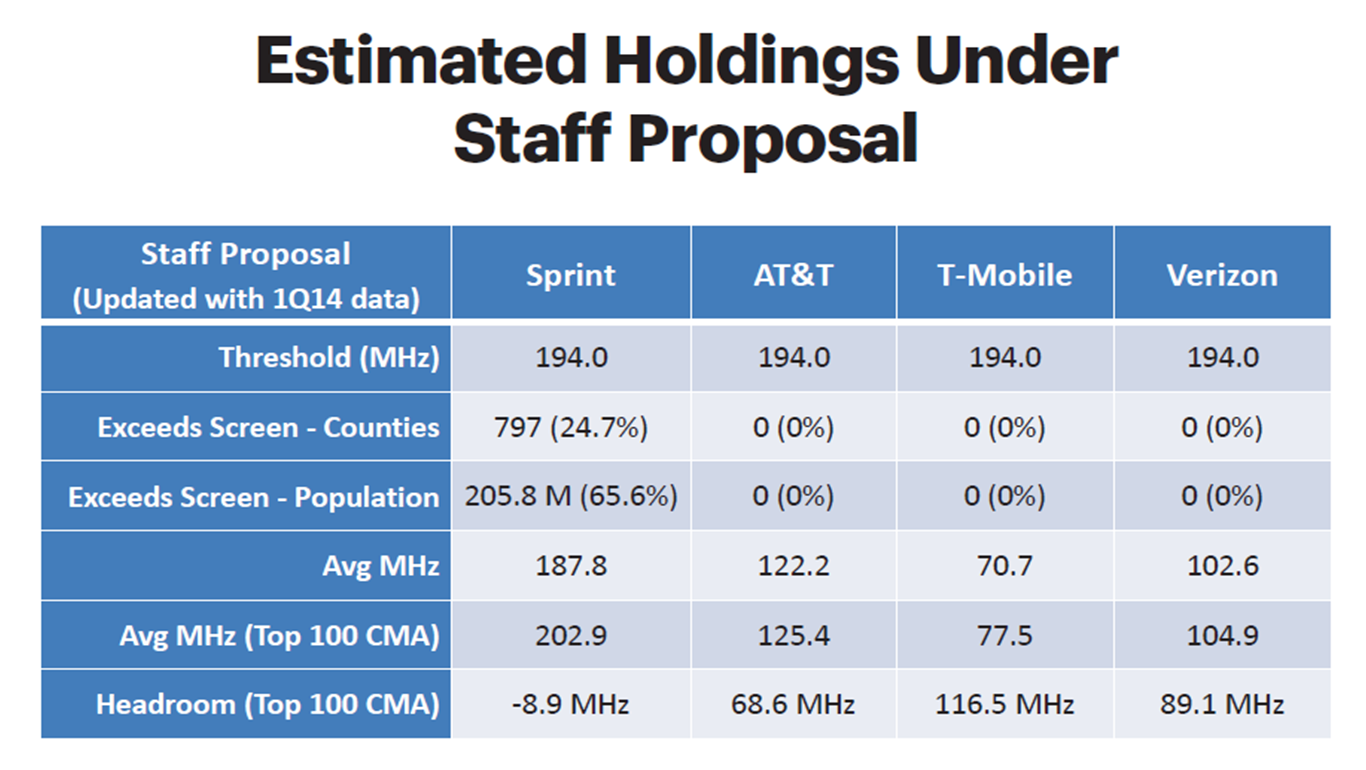 Finally, the entire issue of mobile spectrum holdings (also called “spectrum caps”) is on the May 15 agenda.  This issue is clearly aimed at Sprint and their often rumored merger with T-Mobile.   As background, Sprint holds 120MHz of 2.5 GHz spectrum in 90% of the top 100 markets as a result of their Clearwire acquisition.  This holding allows Sprint to deploy their Spark network across the country.

The FCC has proposed changing the spectrum cap rule to include all of Sprint’s 2.5 GHz spectrum in any future market concentration considerations (note: this would not affect Sprint’s ability to participate as a reserve bidder in the 600 MHz auctions).  According to documents released by Sprint and shared with the FCC, the proposed rules would actually place Sprint under spectrum caps today for 25% of the counties in America representing 206 million people.  AT&T and Verizon, in contrast, would fall under no restrictions.  (See full document here).

Sprint proposed a weighted average proposal that calculates that spectrum above 2.2 GHz (the predominance of all of Sprint’s holdings) is only 1/3rd as valuable as low-band (below 1GHz) alternatives.  While it is highly likely that any 600 MHz wins would be grandfathered into any calculations, without significant changes to the Commission’s proposal, a merger with T-Mobile would be impossible.

The FCC’s May 15th meeting will bring a lot of certainty to Internet prioritization, the diversity and quantity of additional low-band spectrum, and the industry’s ability to create a stronger third player in the market.  It also clearly shows how important and intertwined government policy is with industry profitability and sustainability.

Next week (I promise), we will wrap up the earnings analysis with a recap of wireline growth and talk some more about wireless single-line competitive positioning. If you have friends who would like to be added to The Sunday Brief, please have them drop a quick note to sundaybrief@gmail.com and we’ll subscribe them as soon as we can (and they can go to www.sundaybrief.com for the full archive).