Where is Value Being Created?

Late August greetings from Denver, Louisville, Charlotte, and Dallas, where Texas high schools opened their football seasons (and I tested my Samsung Galaxy S5 panoramic camera setting in the opening picture).  JCP pulled an upset of sorts over perennial state contenders Arlington Bowie with a 35-0 victory.  Next week will be another test when they play Plano East in an away game.

As we exit the month and roll in to the Labor Day weekend, we thought it was a good time to look at who is driving down the field of value creation and to also briefly discuss the latest status of the Connect America Fund (CAF).  Next week we will take a short break from our analytical labors to enjoy a long weekend.

Where is Value Being Created?

A lot of journalistic ink was spilled this week as media pundits tried to explain the mood of investors.  “Don’t panic” was the most common theme through all of the gyrations (which included a brief period on Monday where Apple stock dipped below $93 per share – it closed Friday above $113).  Most investors agreed, and markets began to stabalize (at least temporarily) by the end of the week.

Traditionally, the effect on the US telecom market (and particularly the local exchange carriers) is muted.  On Monday, no company was immune, with Consolidated Communications (ticker = CNSL), Telephone & Data Systems (TDS), and Fairpoint Communications (FRP) selling off at the market open.  Each of these dividend-rich stocks closed at least 6% higher than Monday’s intra-day lows by the end of the week.  Given the fact that these companies are probably are least the impacted by a slowing Chinese economy of any in the telecom space, it was good to see them close higher for the week.

Twice a year, we look at the larger telecom players and gauge where value shifts are occurring between emerging models (Microsoft, Amazon, Google, Apple, and occasionally we add in Facebook) and the bandwidth/ services models (Comcast, Verizon, AT&T, Time Warner Cable, T-Mobile, Sprint, others). For many of you, these periodic looks (as well as the twice-yearly Android World issues) are the favorite issues of the year.

It’s important to keep in mind that this blog (and specifically the value creation issues) should never be used as a stock picking guide.  The purpose of this issue is to see whether bandwidth providers (commonly known as the wireless, telco, and cable industries) are adding value compared to the 4-5 largest business model challengers.  We have no idea what long-term terminal value growth rate should be applied to any of these stocks, and gladly leave that up to others to determine.

A brief summary of how calculations are determined:

With those caveats, let’s look at where shifts are occurring in the telecom and Internet sectors: 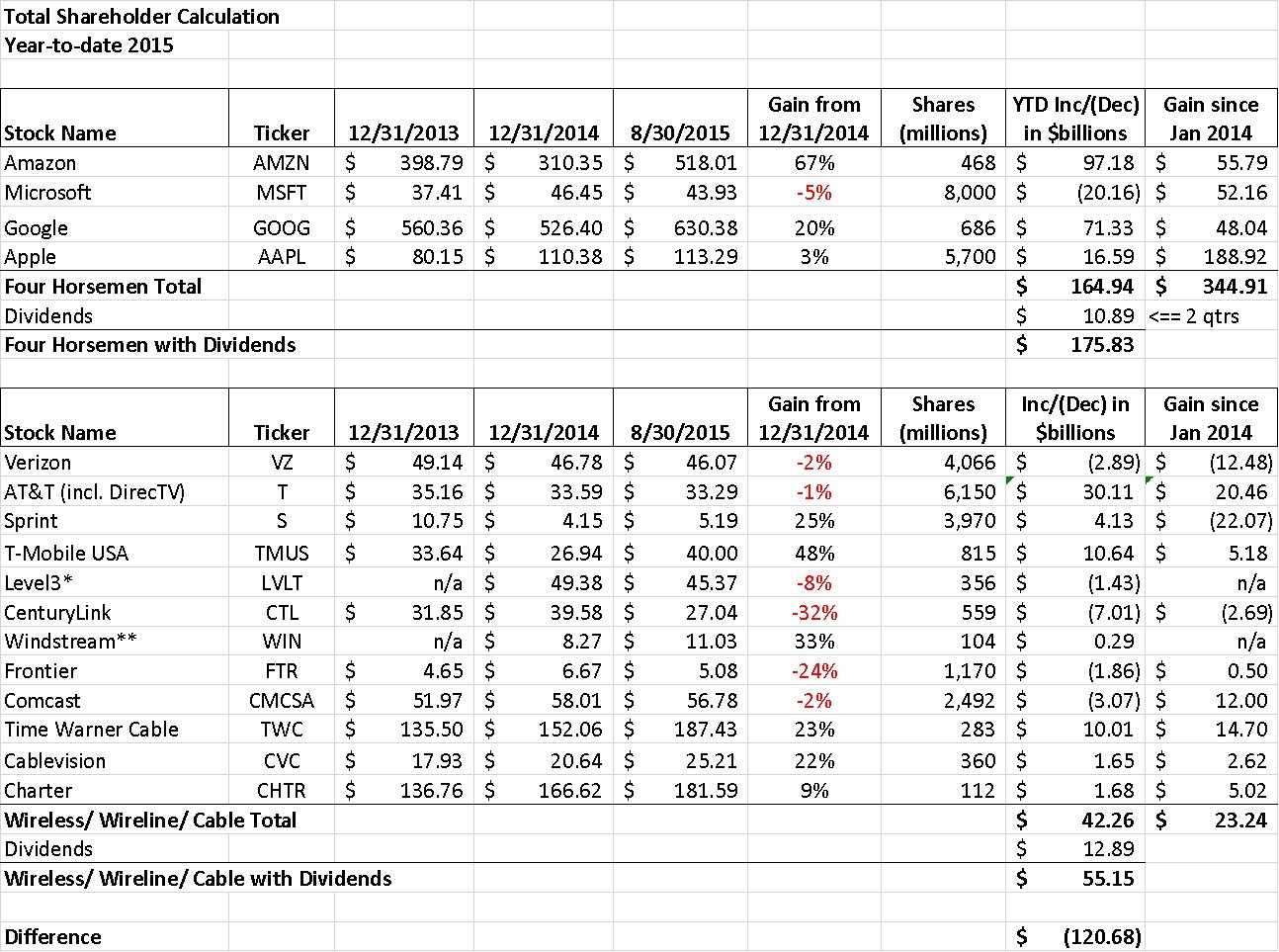 The bottom line is that the Four Horsemen have created $165 billion in increased market capitalization since the beginning of the year and $176 billion in overall value including Apple and Microsoft dividends.  The telco industry has created value since the beginning of the year predominantly through the effect of one acquisition of one provider (the $32 billion DirecTV effect described above, which, if we had included the satellite providers in our original analysis, would have had a net minimal impact).  Bottom line:  Bandwidth providers are less valuable today than their Internet software/ product/ services counterparts, and that gap is continuing to widen (see here for our January discussion on the multi-year effect of this shift).

For the purpose of looking slightly longer than an eight month period (and to attempt to even out dips and gains that can happen between years), we also included the market capitalization increase from the beginning of 2014.  The numbers for the Four Horsemen are remarkably consistent – each (including Facebook) has produced $50 billion or more in market value since the beginning of 2014.  And, while nervousness has continued to increase around long-term growth prospects for Apple, they have added more than 1.25 Comcasts in total value since the beginning of 2014 (and, with their cash and marketable securities on hand, they could buy Comcast and T-Mobile).  This is a very different world than what existed ten years ago, and the hundreds of billions in market value shifts are driving everything from neutrality policies (the demonization of cable companies by Google and others is laughable given the value shifts that are occurring) to merger approvals (Sprint+T-Mobile, AT&T+DirecTV, Comcast+TWC).  Apple + Google + Facebook + Microsoft + Amazon have a combined market capitalization of just under $2 trillion (all created within the last 30 years).  While each is a remarkable story of entrepreneurial zeal, it’s important that their newfound power is properly balanced with that of the wireless, fiber, and copper transport that enables their success.

Connect America Funding:  Who’s In, and Who’s Out 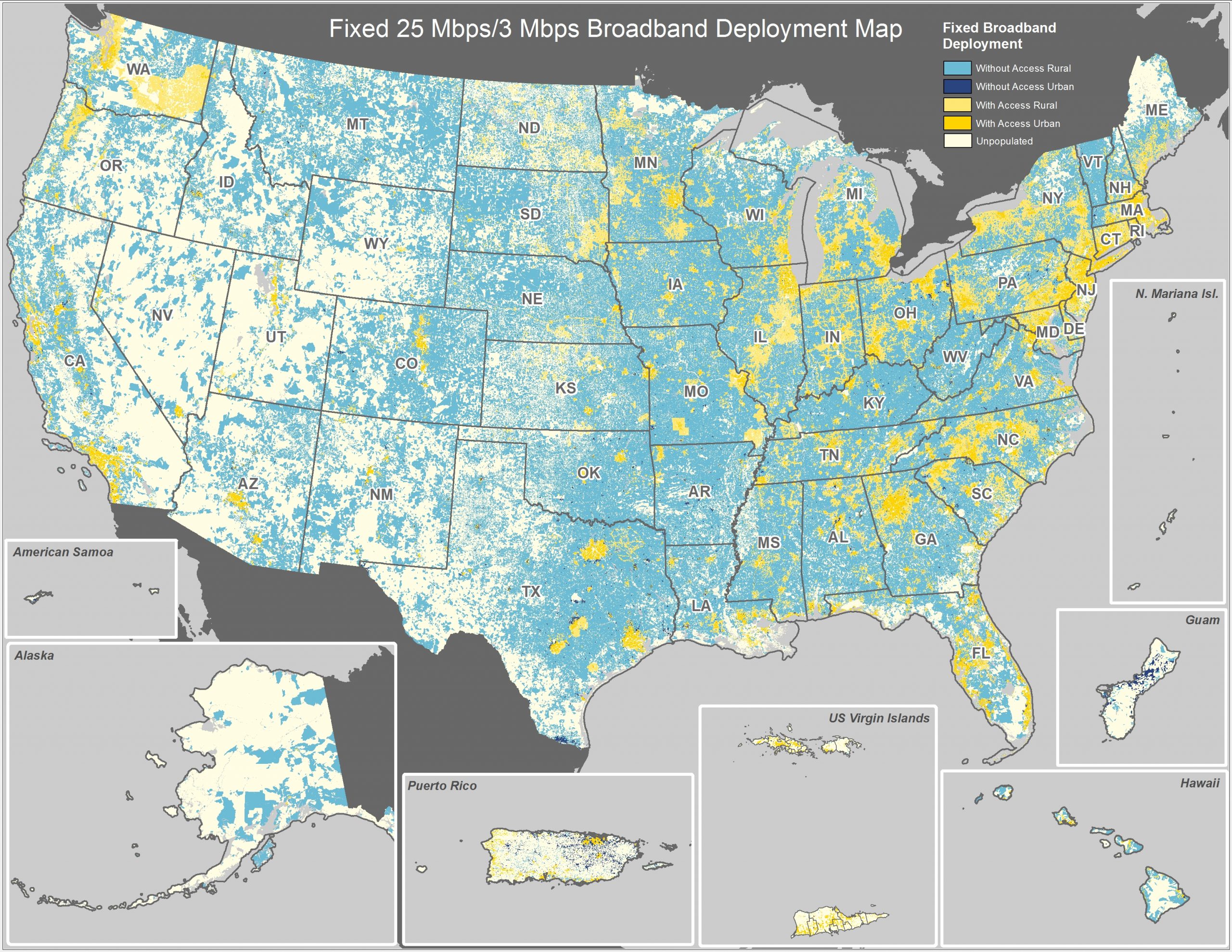 One of the important goals of the presidential administrations past and present is to provide all Americans with a baseline level of communications.  Originally oriented for landline voice services, recent focus has shifted to include broadband (10 Mbps down/ 1 Mbps up) speeds.  The FCC recently announced a new phase to their Connect America Fund, called Phase II or CAF II, which provides incumbent carriers annual subsidies in exchange for construction commitments.

AT&T (2.2 million homes) CenturyLink (1.2 million homes), Hawaiian Telecom (11K homes), Windstream (105K homes) and Frontier Communications (650K homes) have all committed to plans to accept CAF II for a cumulative annual payment of $1.168 billion for the next six years ($300/ connected home per year).  Even when inlcuding those built out under Phase 1 CAF, only 30% of the 14 million homes originally identified in the National Broadband Plan as lacking broadband speeds will have been connected.

What’s missing?  Verizon’s plans.  While they have accepted $48 million for states where they are in the process of selling their local operations (California and Texas, which likely become Frontier’s responsibility in early 2016), they have decided not to accept any additional funds in their predominantly Northeastern and Mid-Atlantic service territories.

This opens up a competitive bidding process for approximately $175 million in annual payments for ten years (a $2 billion commitment).  Could this be the trigger for fixed wireless solutions to emerge, provided they can meet/ exceed the 10 Mbps requirement?  Will rural cable companies (Mediacom, Suddenlink, Northland, Cable One, Charter and others) step up to challenge incumbent providers?  Will the FCC relax speed restrictions if satellite is the only remaining technology alternative?

There are a number of questions remaining around the process, but $2 billion is not a small number and is likely to draw both scrutiny and innovation.  For more details on the competitive bidding process and CAF history, this Davis Wright Tremaine brief on the subject is excellent.

Next week, we’ll take a break from our labors, but will be back on September 13 with an Apple-centric edition.  Until then, please invite one of your colleagues to become a regular Sunday Brief reader by having them drop a quick note to sundaybrief@gmail.com. We’ll subscribe them as soon as we can (and they can go to www.sundaybrief.com for the full archive).  Thanks again for your readership, and enjoy the remainder of your summer!