Metro Connect greetings from Miami Beach, and late January greetings from Dallas and Paris.  Pictured are several Sunday Brief regulars who took part in a panel on “Reinventing the role of the cable company: Making an impact in the fiber space” – from left to right are Jennifer Fritzsche of Wells Fargo, Don Detampel of Charter Communications, Thane Storck of Time Warner Cable, Jeremy Bye of Cox Communications, and Steven Cochran of WOW! Business.  Terrific panel and show.

This week, we will attempt to condense several earnings reports into “To Do” lists.  This is a new format, and feedback is welcome.  While we will list up to 10 items on the company’s lists, we’ll try to keep with the theme of brevity and only focus on one or two of them.

Sprint’s list is long, yet at the same time short.  They announced earnings this week that clearly showed prime postpaid retail subscriber growth (+501K total postpaid net additions, +366K postpaid phone net additions, 1.62% monthly retail postpaid churn).  But they did so with an offer that was more comprehensive than the 2014 Half Off promotion, and which goes against the rationale offered in 2014 that “When you have a great network, you don’t have to compete on price.  [But] when your network is behind, unfortunately you need to compete on value and price.”  Either the network improved (which it did broadly for voice and text, and in a few cities for data) and Sprint should be able to compete without broad 50% off promotions, or it didn’t. 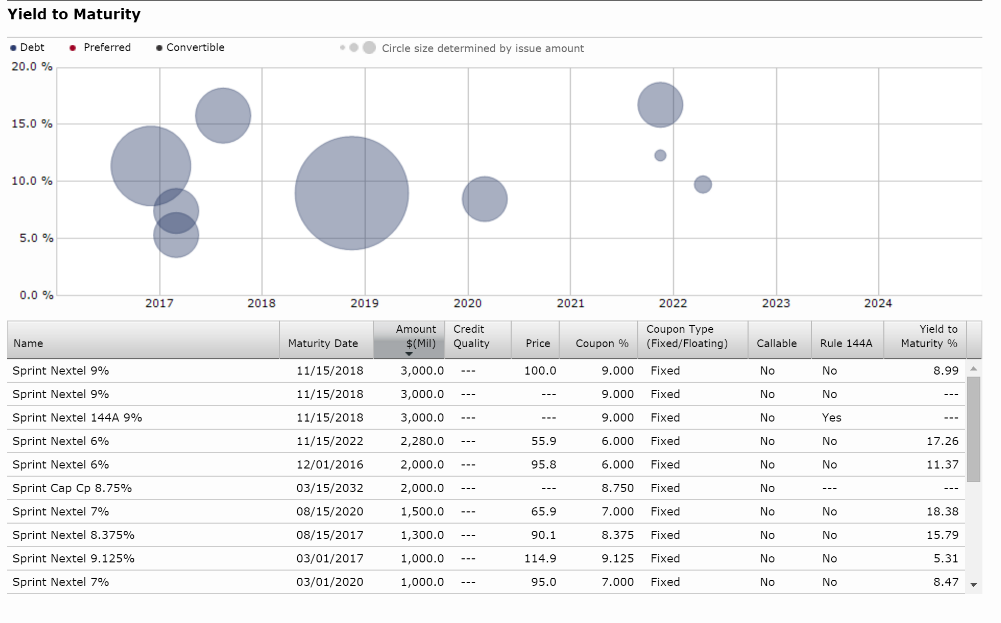 Nearby is a chart of Sprint debt by amount, yield to maturity, and due date according to Morningstar (full details here).  As the chart shows, approximately $4.3 billion of debt will come due in the next eighteen months.  While it should not be difficult to roll a small portion of that amount, it has been very clear from recent Sprint presentations that their intent is to pay off as much of this as possible (One thing that is rarely discussed in Sprint earnings is the drag that $2.1 billion in annual interest payments place on the other cash needs of the company).

To put into perspective, AT&T pays about 9% of their annual EBITDA (cash flow) in interest expense.  Verizon’s figure is slightly higher at 10%.  Sprint’s is a whopping 30% for calendar year 2015.  Sprint has to get their debt costs under control, and rolling the debt that is due soon is not an option.

Many operating items (specifically having to do with their LTE Plus network expansion) are also on the list.  After their earnings call, I am also becoming convinced that 50% off is going to lose its luster in the first quarter and added the need to have another foundational plan take its place.  Finally, Sprint needs to build a more balanced wireless business as their traditionally strong presence with enterprise customers has become diminished over the past several years.  There’s still room for a strong third place contender (20+% market share), and T-Mobile’s efforts to date have been on smaller businesses.

AT&T announced earnings Tuesday afternoon, and their earnings call can be summarized in one word: transitions.  Taken in total, they represent a transformation, but AT&T is going through a series of transitions right now that open them up opportunities.

First, the company has made a disciplined decision to deselect single and double-line customers who want less data (call it 1 GB or less with minimal or any video viewing).  AT&T provided some information on these customers in their earnings supplement and they are leaving in droves.  In 2015, over 3.2 million feature phones have either moved to smartphones (1.4 million or 44%) or have left for other providers including AT&T’s own Cricket Wireless brand (up 1.6 million in the past year). 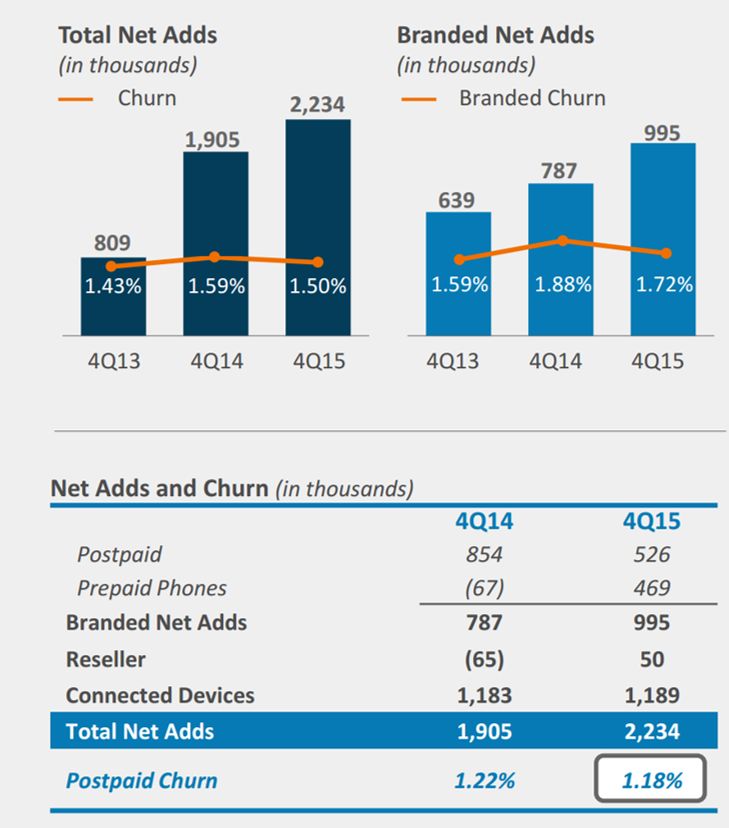 There is some merit to this strategy from an acquisition perspective.  Store reps and the best inbound call center salespeople need to spend their time on acquiring larger bundles, not haggling over charges for a $50-75/ month voice-centric customer bundle.  With 75% of Cricket’s gross additions coming on $50 or higher ARPUs (disclosed on the call), and the ease of transition from an AT&T branded smartphone to Cricket (a SIM card swap), netting the prepaid and postpaid growth figures makes sense (213K retail wireless phone customer nets in 4Q; 165K for total 2015).  in the It does not justify, however, the fact that AT&T continues to lose postpaid branded customers.

The unlimited plan introduction for existing DirecTV customers (which is a precursor to a TV Everywhere offer) is an excellent start.  Unlimited is easy to sell (and they now have a counter to Sprint’s and T-Mobile’s unlimited products) and service.  The current AT&T product is a very good value (four lines with unlimited everything for $180/ mo.), especially for the fourth family member (who is free).  While AT&T CEO Randall Stephenson was not going to make product introduction headlines on the call, it was pretty clear that the offering would involve cross-device viewing of premium content (e.g., HBO or Cinemax or Showtime or all of the above) for one low monthly fee.

There’s a lot more to talk about with AT&T, including their surprise profitability improvement in business wireline (we’ll try to talk about this in conjunction with CenturyLink’s and Level3’s earnings).  AT&T has a lot on their plate, and their performance in IP Broadband was downright dismal (it’s not clear that the new network can attract new customers).  If 2014 was a transition year for U-Verse broadband, 2015 should have shown some strength.  Starting in the second quarter, IP broadband net additions began to come in at 33-50% of 2014 levels.  45 Mbps might be enough bandwidth for many customers, but if the competition is offering 100 Mbps for a similar price, AT&T’s offer will not be as attractive.

If broadband takes a back seat to Mexico and DirecTV throughout 2016, AT&T’s current market share will slip from 25% (15 million customers on a base of 60 million deployed as discussed on the call), to 20% or worse.  Can AT&T have a competitively advantaged home strategy against cable providers without a broadband presence?  That’s a really tough question for AT&T to answer.

Time Warner Cable hosted what is likely to be their next to last earnings call as a separate company, and they are finishing strong (full details here).  Most important on their “To Do” list is the completion of the merger with Charter and Bright House networks.  Their initiative list begins and ends with that, not only because they have been in “merger mode” for over two years (which creates employee strain), but also because they need the combined benefit to improve their programming costs (which rose a whopping 9.7% year-over-year in the fourth quarter).  For more on the approval process, see this article on their hearing last week in California. 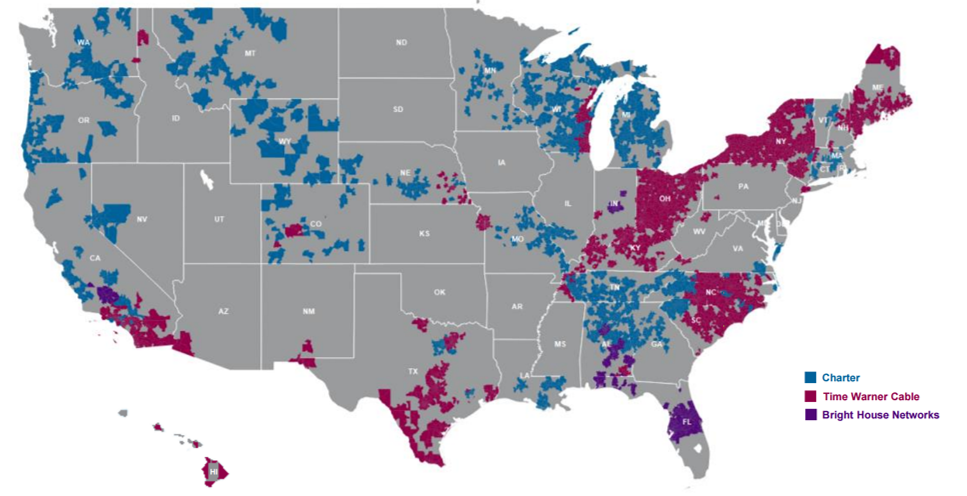 A lot of TWC’s unit growth is coming from promotions (particularly Digital Phone).  As these promotions expire, it will be interesting to see how TWC keeps these customers from cancelling service or leaving.  Commentary on their retention strategies was light on their earnings call.

The second focus area worth mentioning is capital spending and the relationship to commercial services growth.  TWC over-indexed on capital, particularly when measured as a percent of revenue, in 2015 ($4.4 billion on a revenue base of $23.7 billion).  If the company tries to keep capital at a low level in Q1 and Q2 (13% or lower), the Maxx initiative will lose momentum.  While TWC has been taking market share in Los Angeles and Dallas (and stemming losses to FiOS in New York City), they have a potentially even greater opportunity in Rochester (Frontier), North Carolina (AT&T), Louisville (AT&T), Ohio (AT&T) and San Antonio (AT&T) where ILEC plant is not broadly strong and where loop length matters.

More importantly, however, these markets are important for business growth.  Line extensions and in-building agreements are not cheap, but TWC should strive to add at least 70,000 additional sites that add an existing $1 billion in revenue potential in 2016.  That upside could completely eliminate the downside from expiring promotions with exploding rates.

Bottom line:  Every company has a “To Do” list entering 2016.  Each is different, and not every company will (or can) complete their full list.  Execution of their most important items is important, but does not guarantee competitive success. 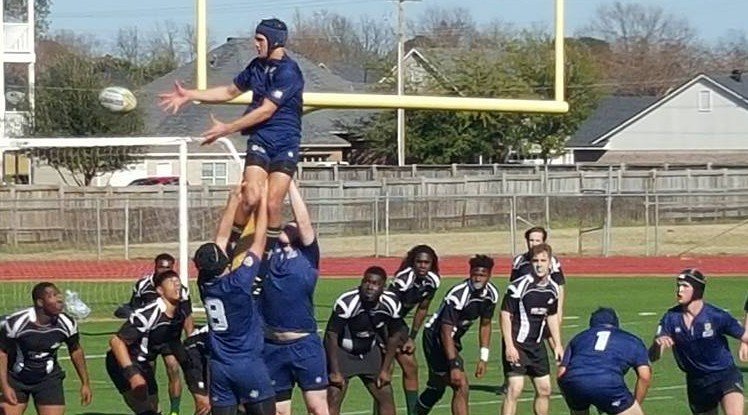 Next week, we’ll add the Comcast (earnings our Wed), Charter (Thursday) and Level3 (also Thursday) results into the mix.  Until then, please invite one of your colleagues to become a regular Sunday Brief reader by having them drop a quick note to sundaybrief@gmail.com.  We’ll subscribe them as soon as we can (and they can go to www.sundaybrief.com for the full archive).  Thanks again for your readership, and Go Jesuit Rugby!