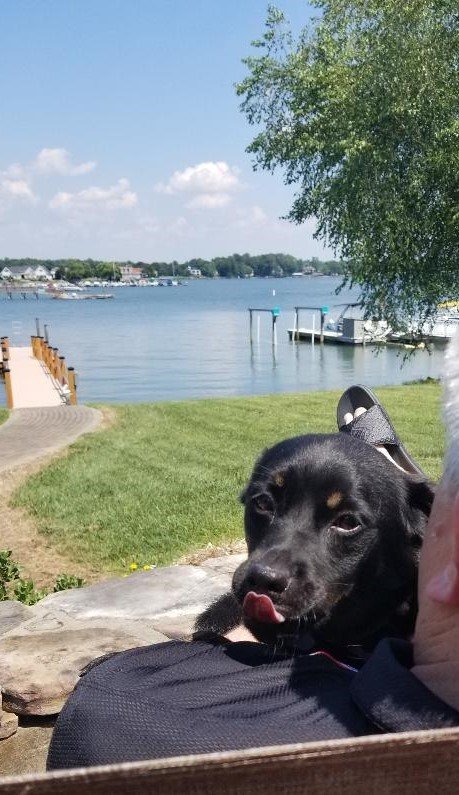 Greetings from Lake Norman, North Carolina, and TSB (The Sunday Brief)’s newest member, Abby!  After just over three years with ACN, I have decided to go back to consulting, writing, and maybe even teaching (more on the last one below).  Further info on the first two companies I’ll be working with when we announce them, but the Patterson Advisory Group is back in business and we have a lot of catching up to do!

Where We Left Off

When TSB last signed off on 6/6/2016, the Four Horsemen (Microsoft, Amazon, Google and Apple) had a combined market capitalization of ~ $1.8 trillion (see Mary Meeker’s chart below – full slide deck is here).  They had ~$446 billion in cash on their books and net debt of negative $317 billion.  To even it out, the telecom carriers we were following at the time had a positive $347 billion in net debt.

T-Mobile continued to disrupt the market and grow like crazy.  Verizon still had metered/ bucket pricing for residential wireless (Beyond Unlimited came in February 2017), and video compression (480p) was not a tradeoff for lower pricing.

On the wireline front, Windstream and CenturyLink had a combined market cap of $25 billion.  They also had $43.3 billion in debt.  The separation of Alltel into Windstream and Consolidated Sales and Leasing (CSAL – now Uniti) appeared to be working, and dividend yields continued to be attractive. 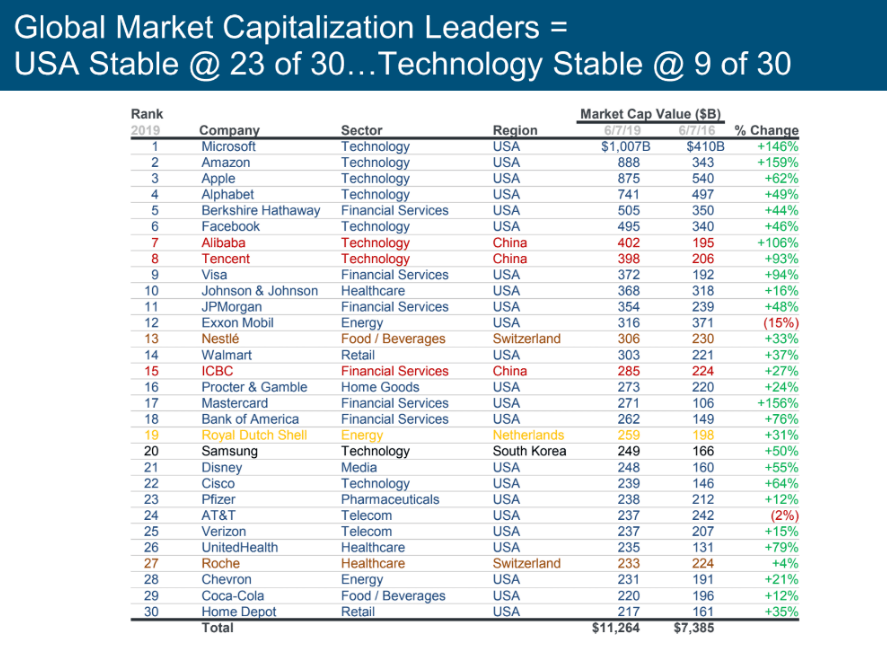 Additionally, in what will be a new theme for TSB, wireless tower providers were primarily tower providers: their reach did not extend into infrastructure between locations.  And SBA, American, and Crown Castle’s collective market capitalization was a cool $85 billion (now worth double that).

What’s Changed for the Better?  Well…

Clearly, the last three years have shown us that industries/markets do not behave like consultants’ PowerPoint slides.  June begins the annual planning cycle for many large corporations, and predicting market/ competitive dynamics has never been tougher.

Microsoft, which was in the early stages of refreshing its corporate soul in 2016 (Satya Nadella became CEO in 2014), has seen the biggest value transformation ($597 billion in market capitalization added in three years – roughly an AT&T or a Verizon per year), and it largely came from within.

Several of you have commented to me in the past that Facebook should be given more prominent status as a full-fledged Horseman in 2015 and 2016, and some of you even suggested (in 2015 and 2016) that Microsoft should be dropped.

Perhaps it’s an historical perspective (I still proudly wear my Microsoft 25th anniversary sweatshirt from 1990), but I remember the day when the Redmond giant generated lots of revenues from package software for personal computers.  The journey from Windows/Explorer/Office to business package software (think Great Plains acquisition in 2001), and full-fledged corporate software (Windows NT), and hardware (Xbox in 2001 and Xbox 360 in 2005, Zune music in 2006, Danger (phone maker) acquisition in 2008, Surface laptops in 2012 and Nokia in 2013), and mobile/communications ($8.5 billion acquisition Skype in 2011), and Azure cloud, and business social media ($26+ billion LinkedIn acquisition in 2016) has not been easy for the company.

Through it all, however, has been Windows and Office.  Depending on which estimates you believe (here and here), Windows has a current installed base of ~1.5 billion and Office ~1.2 billion devices.  This excludes the app versions of the product which are installed on more than 500 million smartphones today (including two devices at PAG).  It’s not easy to change code structure to make large programs like these more efficient, but Nadella and team began that process nearly five years ago and it’s starting to pay off.

The first challenge was to enable Office 365 to function as well as or better than its package software counterparts.  The goal:  use cloud storage/ computing to deliver a better Microsoft Office experience across each device.  Given the array of devices and the installed base, it’s not as easy as it sounds.  While I am not privy to how Microsoft’s software architecture works, it’s safe to assume that large portions of the legacy Office software had to be rewritten and reconfigured (and rewritten and reconfigured, and …) Judging from recent reviews like this one from PCMag.com, that goal has been met. 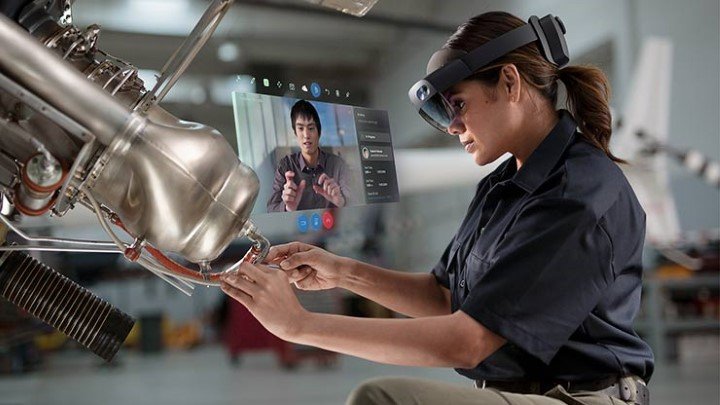 Now comes an even tougher challenge: deliver code to drive faster decisions at the edge (on/with devices that are increasingly a HoloLens, mobile device, smartwatch, or automobile).  Think of the development challenge in terms of two factors: processing capability (measured by memory + processing capabilities) and speed (measured by bandwidth and latency, which are improved by increasingly faster networks).

How do you deliver a similar/better/business-changing experience to such an array of devices?  Efficient design and code that uses as little memory and storage in the peripheral/edge device as possible.  This change will also increasingly move Microsoft into the business-decision process (sometimes called intelligent databases, but really, really smart).

Bottom line:  Microsoft is a very different company than it was three (and especially five) years ago.  They are focused on code redistribution, interaction and efficiency.  It’s a unique position for their consumer and enterprise business units, and why investors are awarding them with a trillion dollar market cap.

What’s Changed for the Worse?  Well…

Many value shifts have occurred in the past three years: the rise of the sharing economy, increased time spent accessing information via mobile device vs. any other hardware, rise in digital consumer and small business financing.  Each of these shifts pales in comparison to the changes in the wireline telecommunications marketplace.

Frontier, CenturyLink and Windstream/ Uniti Fiber are the best proxies for the space.  They were desired for steady dividend yields which were supported by legacy telephone bases.  Each of these companies attempted either to scale or diversify with varying results.  The carnage is shown below using Frontier Communications share price as a proxy:

Each of these companies is tanking, with CenturyLink being supported by Level3 and Frontier’s head barely above water (with a Q1 2019 net debt to EBITDA leverage ratio of 4.76x, and 2% monthly customer churn, many are assuming that Frontier will be the next Local Exchange Carrier to enter Chapter 11 – more on that in this Bloomberg article).

Windstream also faces a similar struggle with its aging copper network which is now owned by Uniti Fiber and leased back to Windstream at pre-arranged terms (currently through 2030).  Based on recent bankruptcy court proceedings (see full details here), it’s likely that Uniti will have to take a lower lease rate sooner than originally forecasted.  This is likely good long-term news for Windstream, but does not address the headwinds that cable providers (and soon wireless companies) will generate, especially in the commercial segment.

Both Windstream and Frontier (and, to a lesser extent, CenturyLink) need to tackle their value proposition, particularly with non-rural consumer and small business customers (hint: “price for life” is not working).  Fiber sales and becoming 5G infrastructure along highways and in smaller towns will replace some, but not all, of the dwindling copper value. 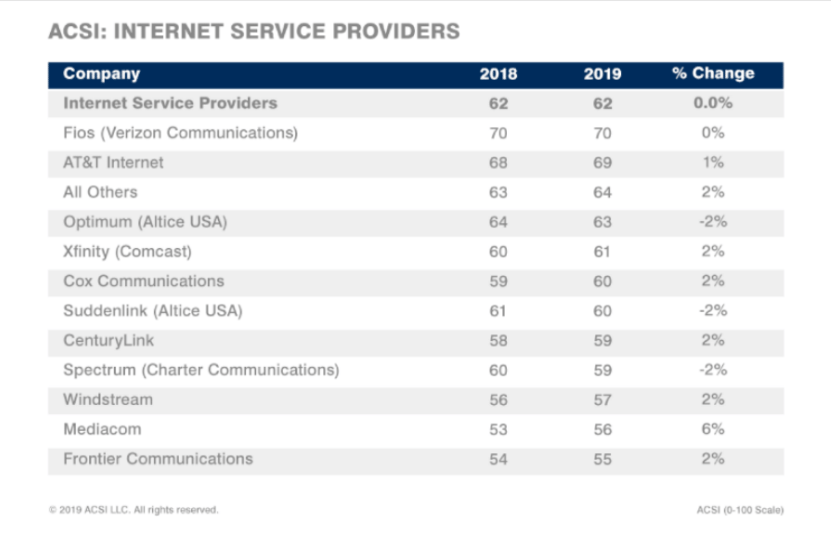 The nearby chart from the recently published University of Michigan’s American Customer Satisfaction Index (ACSI) shows why there is still hope for rural Internet providers.

Newer is better.  Fiber infrastructure generally brings fewer issues (see the Verizon FiOS score).  A complete understanding of how broadband connects throughout the home (Frontier excels in this area) is better.  Riding the wave of over-the-top services and allowing Roku, Hulu, YouTubeTV, Netflix, and Amazon Video to do their jobs is better (and comes with minimal gross margin loss).

Bottom line:  The playbook for rural LECs is straightforward:

It’s been a very sad three years for rural LECs.  Many lives have been negatively impacted because of management hesitancy to face the long-term competitive realities and to stretch the line loss scenario range.  Facing the music will be tough, and transformation may not be possible without significant pain.  The plan above is a good starting point to restore investor/ bondholder credibility.

A gap of three years leaves much to cover in one article, but we continue our commitment to keeping each TSB short but sweet.  Next week’s article focuses on next generation networks (low-latency, high-bandwidth, consistent) and the yin and yang between network and software progress.

Before you close this email, please send this on to a few folks who might be interested.  I am trying to respect everyone’s email space/time – if any are interested, however, send a message to sundaybrief@gmail.com and we will add to the next week’s distribution.

And, for a second favor, if you have one article/ book title/ YouTube lecture/ other material that might be of interest for two college-level courses I am putting together, I would greatly appreciate sending me the associated link.  The course titles I am prepping are as follows:

I hope everyone has a terrific and safe Fourth of July week!  Glad to be back!