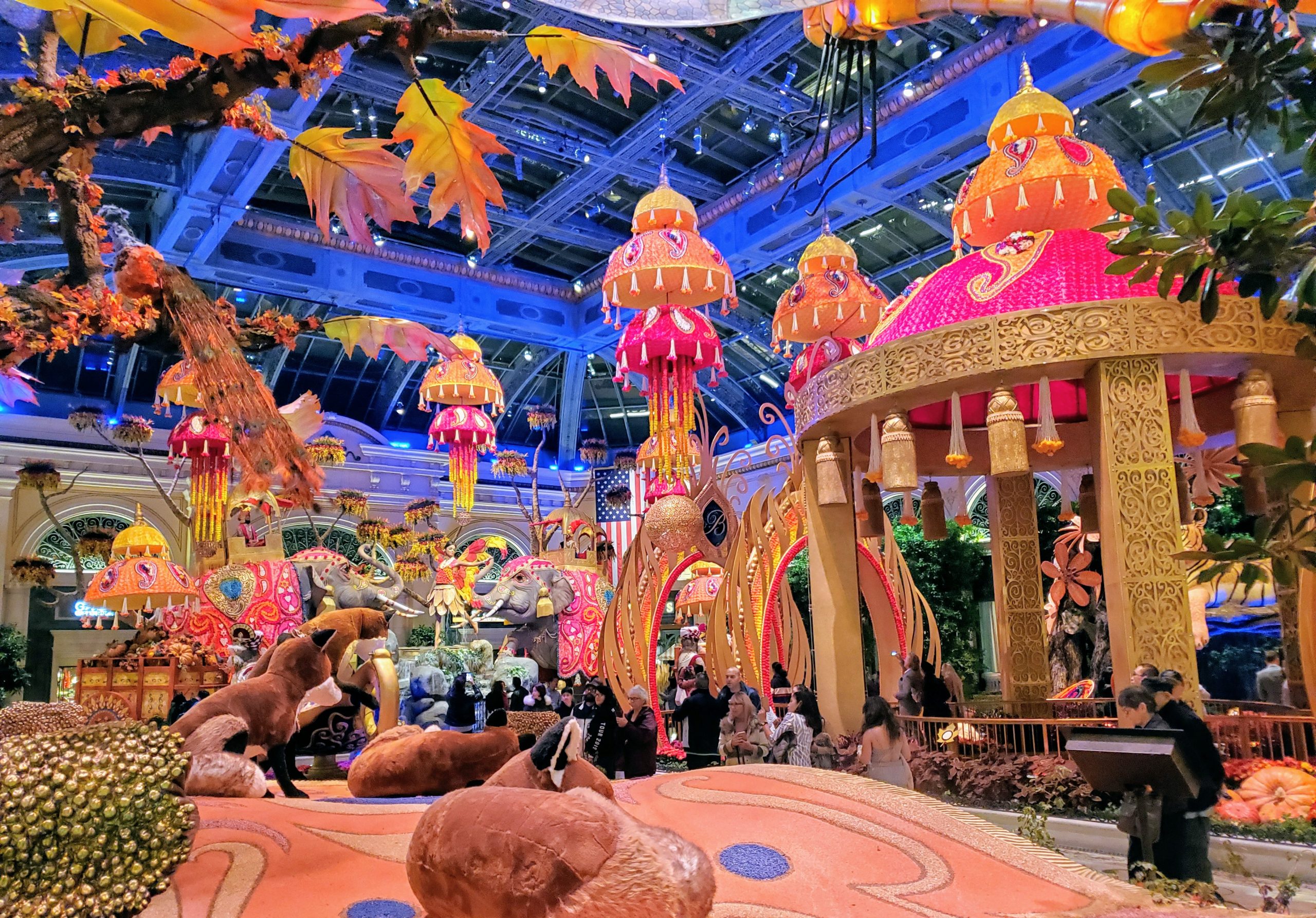 Pre-Thanksgiving Greetings from Kansas City, Las Vegas (Bellagio flower display pictured), and Lake Norman.  Please note that next week we vary from our traditional format and will have a short commentary on Tim Wu’s The Master Switch, one of the books we are including in a History of Technology curriculum currently under development.

This week, we will focus on several “What if?” questions that build on last week’s TSB.  We will end with a very short TSB Follow-Ups section.

In last week’s column, we outlined three components of long-run success in the telecom industry:

These all seem like very basic elements, but, as we will see, the telecommunications industry is rife with bad/no/delayed decisions, most of which have cost shareholders billions of dollars.  We will also highlight some excellent decisions to counterbalance the duds.

Question #1:  What if AT&T’s Board had decided to keep their assets intact in 2000 versus splitting themselves into four distinct divisions?

In what will go down as one of the most pivotal and short-sighted decisions of the 2000s, AT&T’s Board of Directors decided to separate the company into four distinct units in October 2000.  The new units were a mix of technologies and segments:

2004 by Cingular, a joint venture of regional Bell companies SBC Communications and BellSouth.

At the time of the breakup, the legacy AT&T had over 46,500 route miles of long-haul network as well as 17,000 route miles of local fiber and were processing 300 million phone calls daily (interestingly, the 2001 annual report also discloses that the IP backbone was processing 2,175 Terabytes of traffic daily – a paltry sum by today’s standards).

Three major telecommunications events were triggered by this breakup:

One can only wonder what a long, long term view would have meant to AT&T’s corporate future.  Those who held shares in the acquiring companies did not do poorly, but one has to wonder whether Mr. Derr (former Chevron CEO), Ms. Eickoff (U.S. Government Office of Management and Budget), Mr. Fisher (former Chairman of Kodak), Mr. Hostetter (former Chairman of MediaOne), Dr. McHenry (Georgetown University), Mr. Simpson (Former Chairman of GEICO), Mr. Sovern (Sotheby Holdings), Mr. Weill (Citigroup) and others might have persuaded the Board to continue their consolidation strategy.  For more of an historical perspective on AT&T during this period, read this New York Times archive article.

Question #2:  What if Sprint had purchased Alltel instead of NEXTEL?  Following SBC’s announcement to acquire AT&T at the beginning of 2005, Sprint announced that they would acquire NEXTEL corporation in a “merger of equals” valued at ~$35 billion (with no more than $2.8 billion, or about 8% of the total transaction, to be in cash).  Sprint also announced that they would spin off their shrinking but cash-generating Local Telecommunications Division into a new company.

Generally speaking, this transaction was hailed as a winner for Sprint’s business segment (prior to joining BellSouth, Sprint CEO Gary Forsee led Sprint’s Long Distance Division, and, prior to that Sprint’s Business Markets Group).

The story of the new Sprint Nextel’s inability to compete against Verizon and the newly configured Cingular is well known.  Sprint’s stock fell by more than 80% in the four years following the merger announcement, and its retail postpaid subscriber base fell by more than 8.5 million customers from 2006-2009.  The following chart shows the remarkable decline in Sprint’s stock price following the merger (versus the S&P 500 and Dow Jones Telecom Index): 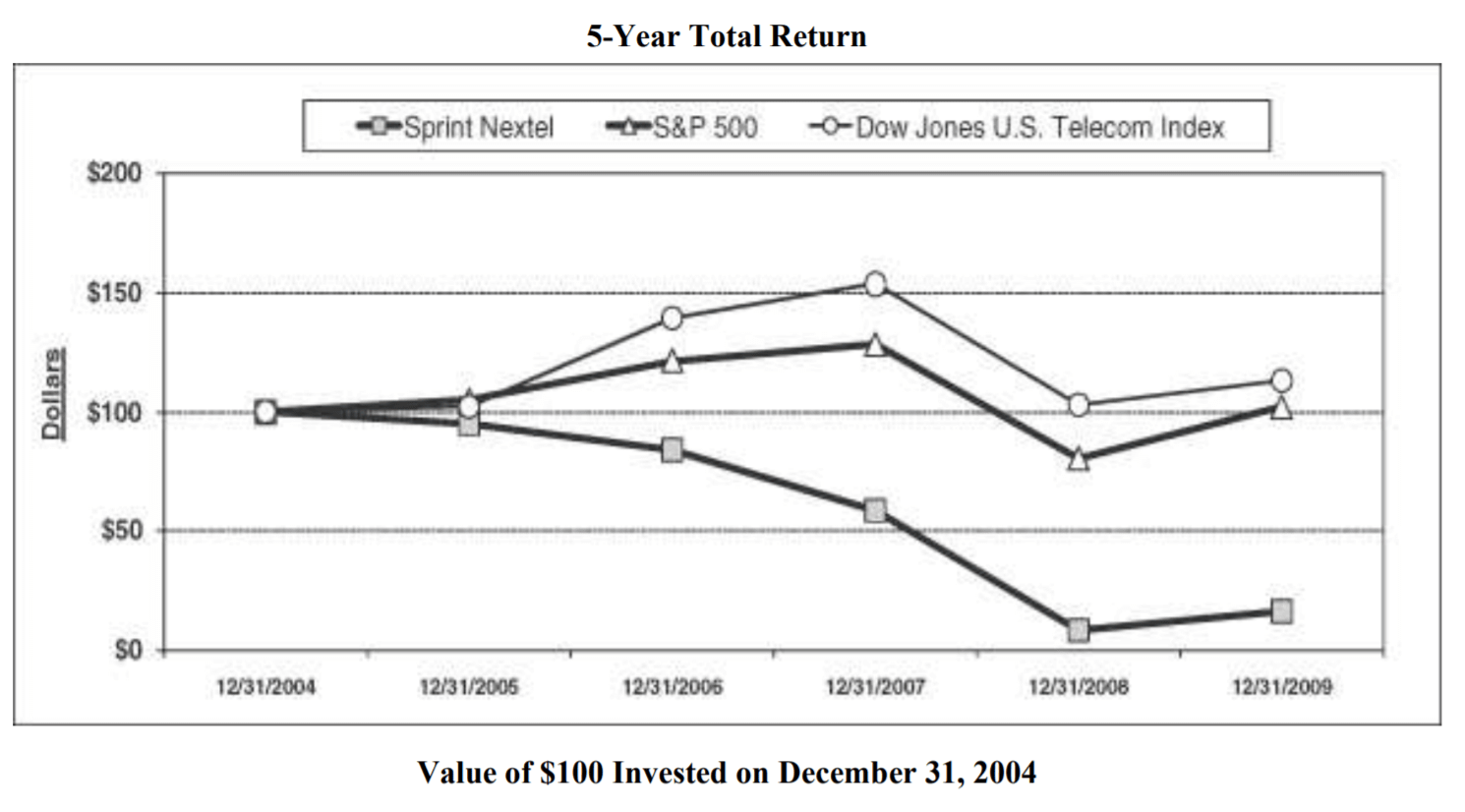 During this decline, Verizon picked up the assets of ALLTEL Wireless for $28 billion (all debt) in June 2008, less than 9 months from the date the assets were acquired by private equity firm TPG and Goldman Sachs Capital Partners for $27.5 billion (more here).  According to this New York Times article, some of the debt from the original deal was never sold by the issuing banks and was sitting on their balance sheets at a loss.  As many analysts noted at the time, this looked to be a relatively easy transaction to integrate due to technology compatibility (both Verizon and ALLTEL were using CDMA technology at the time).

This leads to an interesting question:  What if Sprint had acquired all of the assets of ALLTEL instead of acquiring NEXTEL?  The implications of a Sprint/ ALLTEL (including local phone operations) would have been much different than what Sprint actually experienced with NEXTEL.

As of 2005, the combined ALLTEL was generating nearly $3.6 billion of EBITDA on $9.5 billion in revenues (~38% EBITDA margin).  The company’s 10 million wireless customers represented a combined 14% market penetration, but Cost per Gross Add was rising ($340) as were retail minutes per month.  The local telephone unit, while smaller and shrinking two percent from 2004-2005, generated a 58% EBITDA margin.  ALLTEL had a combined debt of just under $6 billion and had A2 ratings from Moody’s.

The implications of an ALLTEL as opposed to a NEXTEL merger would have created a different Sprint:

This is a lot of Monday morning quarterbacking from one who was there at the time, but one can only wonder where Sprint would be without that fateful decision at the December 2004 Board of Directors meeting.  Mr. Ausley (private attorney), Mr. Bethune (former Chairman of Continental Airlines), Dr. Draper (former Chairman of American Electric Power), Mr. Hance (former Vice Chairman at Bank of America), Ms. Henretta (Procter & Gamble); Mr. Hockaday (former Chairman of Hallmark Cards), Ms. Lorimer (Yale University), Mr. Rice (Mayport Venture Partners, LLC), Mr. Smith (former President of the Kaufmann Foundation), Mr. Storch (Target Corporation), and Mr. Swanson (Raytheon) likely presided over the most consequential decision in Sprint’s history.

Question #3:  What if John Legere had said “No” to the T-Mobile job?  This question took on a new importance this week as John announced that he was handing the CEO reins over to current COO Mike Sievert.  The impact of John Legere’s rein is shown in the stock price chart nearby.  On an adjusted basis, the stock price in October 2012 was $16.60 (see more on the Yahoo! Finance page here).  This includes a dividend declared at the time of the stock split in May 2013.  Using the $16.60 figure, T-Mobile’s equity has grown at a compounded rate of 24.9% over the last seven years.

We have documented the rise of T-Mobile in many TSB over the past seven years (we even penned a “Dear John” letter that resulted in a new Sunday Brief subscriber).  Here’s a very brief summary of T-Mobile’s accomplishments using the September 30, 2012, and September 30, 2019, quarterly statements:

The other amazing statistic is that T-Mobile achieved this without ballooning their debt balance (which explains the equity chart growth above).  And should they be successful with the Sprint merger (the Attorneys General trial starts in two weeks), they will inherit a large base of postpaid subscribers and a larger amount of 2.5 GHz mid-band spectrum.

John Legere will go down as the greatest telecommunications executive since the 1984 AT&T divestiture and a major business leader of the 21st century.  For an interesting 2012 interview featuring a clean cut Legere, click here, and an early CNBC interview from John’s first year here.

Kudos to Deutsche Telekom CEO Rene Obermann and the entire DT Board for a terrific choice.  Without it, it’s unlikely that T-Mobile would have the opportunity to purchase Sprint and reshape the telecommunications industry.

AT&T announces that their latest network upgrade will not carry additional charges.   In an article on Friday, Light Reading reported that AT&T will not be increasing rates when their network upgrades begin in December.  Also, AT&T announced that their Unlimited Elite plan will now include 100GB of high speed data per line, with 30GB of Hotspot service, HBO, and 1080p video resolution included.  We will have a short update on AT&T initiatives in early December, but have noticed on the RootMetrics metro reports that their metrics are at worst flat to Verizon and, in many cases have improved dramatically (see the Detroit report here).

Vodaphone announces a substantial agreement with Google to consolidate servers and improve their data analytics capabilities.  This is a moderate but important step for the global wireless giant.  More on the capabilities from this Bloomberg article and on the server consolidation from this Light Reading article. 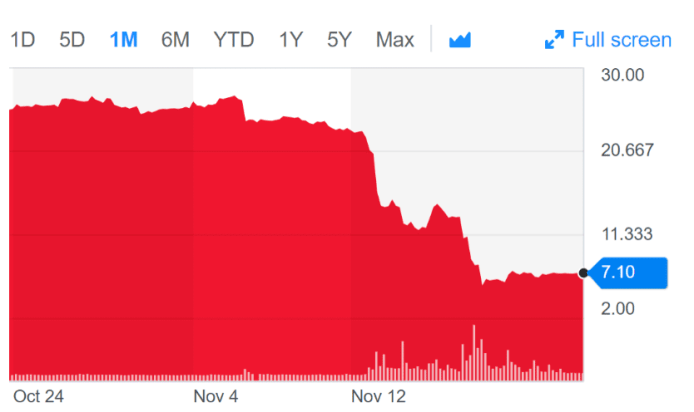 FCC announces that C-Band will be publicly auctioned, and it’s not good news for Intelsat and Eutelsat.  The FCC rejected the C-Band Alliance proposal outlined in last week’s TSB, proposing instead to auction a 280 MHz block of spectrum in the second half of 2020.  The impact on Intelsat’s stock over the past month is nearby, including a 41% drop last week (70% drop over the past two weeks).  A good article from CNET summarizing the recommendation and implications to the satellite and wireless carriers is here.

That’s it for this week.  As mentioned earlier, we will have a decade look back at Tim Wu’s book next week.  Until then, if you have friends who would like to be on the email distribution, please have them send an email to sundaybrief@gmail.com and we will include them on the list.

Have a terrific Thanksgiving!