What Can Stop T-Mobile

May greetings from Paris (where it was unseasonably cold – entrance to the Louvre at night is pictured) and Dallas (where it is unseasonably wet).  This week has been full of earnings news for both the wireless and broadband wireline, as well as Internet companies such as Amazon.  Given the attempt to be brief each week, we are going to focus on T-Mobile today, and will tackle the earnings progress from Comcast, Time Warner Cable, Charter, Sprint, CenturyLink and AT&T through the remainder of May.

Before diving into T-Mobile earnings, I am pleased to announce that I’ll be joining the ranks of full-time employment starting in early June.  I’ll be running the North American wireless business for ACN, a Charlotte-based direct marketer/ MVNO with three wireless carriers as networks and strong growth potential.  ACN has been a client for over three years and their management team is exceptionally strong.  Distribution and handsets are two of the important factors when running an MVNO; ACN excels in the former with more than 81,000 sales makers in the United States and growing operations across 23 additional countries.

Many of you understand my love for the Tar Heel state, and especially my alma mater, Davidson College.  It’ll be good to re-root there after a 24-year absence.  As a result of my new job, the Sunday Brief is going to cease publication after the June 6 issue.  I’ll be suggesting other interesting blogs and news outlets for you to peruse, and we’ll keep www.sundaybrief.com up and running (with better indexing) for the next year or so.  I’ll still surface as a guest writer, panelist and speaker periodically, but the weekly written Brief is going to disappear into the summer breezes.  If you need more than that, you’ll have to swing by Charlotte and try for a special luncheon edition (or coffee, or happy hour, or … ).

What Can Stop T-Mobile? 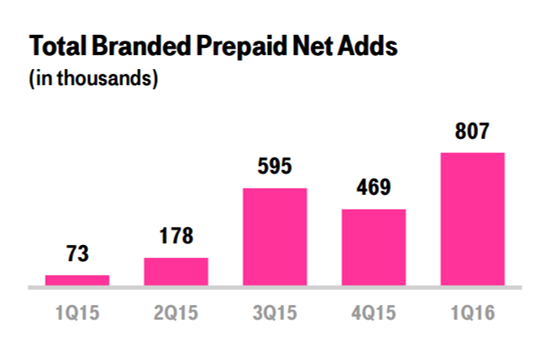 T-Mobile announced earnings on Tuesday morning (full package here), and the results were strong across the board.  Prepaid was especially strong (807K net adds; 3.84% monthly churn), as Metro PCS took share from Sprint (retail as well as Boost/ Virgin) and other smaller brands.  T-Mobile’s opportunities continue to expand as their LTE and 700 MHz (Band 12) networks grow.

Rather than a straight dive into their earnings or comparing their progress to the “To Do” list we built after the first quarter release, I thought it might be beneficial to talk about three factors that would cause T-Mobile’s momentum to be derailed.  Their metrics were good, and sensing the possible headwinds is not easy to do, but here’re a few thoughts about what could derail their three-year winning streak: 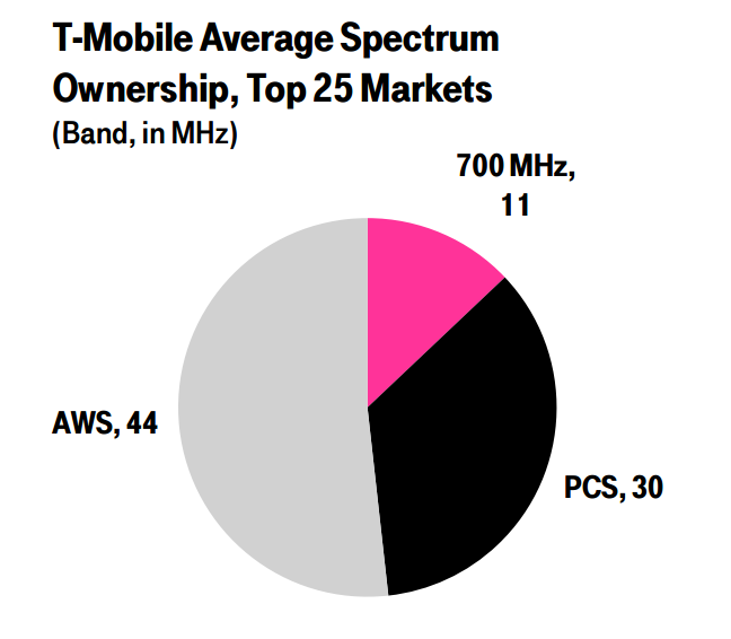 Could Comcast, NTT DoCoMo, America Movil and other spectrum speculators bid up the 30 MHz in the reserve auction and make the spectrum too expensive for T-Mobile?  It’s technically possible, but the likelihood is remote.  Could the FCC have generously qualified some spectrum as being “unimpaired” that takes years if not a decade to clear?  Perhaps, but again, the chance is very remote.

After Friday’s announcement, the exact opposite scenario becomes more likely:  T-Mobile shows up at the auction and bids $8 billion for a large swath of spectrum (30 MHz by 30 MHz being the best case) which sets the company up for capacity for the next decade.

There’re a lot of “ifs” in the previous paragraph.  Comcast would have to pay $5 billion or so for spectrum covering their territory, and another $5 billion or so to have a robust nationwide network (even with the ample supply described above, which should keep overall bid levels in check).  While they would have a distinct advantage with owner’s economics on the bandwidth going to each tower (although Zayo, Level3, or regional players to unseat Comcast as a supplier), they would not have a competitive advantage when it comes to constructing, operating, and maintaining tower assets.

On top of this, Comcast lacks the retail distribution network to distribute traditional smartphones.  With enough promotional money, Best Buy or WalMart could provide that network, but it’s unlikely that Comcast would be able to avoid the store requirements (people, capital, inventory, etc.).  Because smartphones are critical to daily lives, the thought of shipping devices through Amazon will not work – stores will be required.  T-Mobile has an extensive exclusive dealer network and has the process of operating and maintaining a store down to a science.

A merged Comcast/ Sprint (post-bankruptcy) presents an entirely different competitor.  We’ll know more about Sprint’s overall health and the prospect of paying their long-term debts after they announce earnings next week, but if Comcast could receive regulatory approval, a Sprint combination would erase the problems described above.  If Comcast had 600 MHz, and Sprint brings 2.5 GHz (and minimal indebtedness), the resulting fiber-dense, data-focused, content-capable entity that would result could threaten T-Mobile… in 5-7 years.

The chances of Comcast receiving regulatory approval for the acquisition of any telecommunications asset without giving up a lot in the process is practically zero unless the new FCC Chairman is a former Comcast employee (or cable executive).  While matchmaking dreams create theoretical possibilities, T-Mobile’s greatest competitive threat would likely come from an America Movil expansion with Sprint of Verizon, not from Comcast.

Of course, the FCC could discover plenty of ways to reduce pricing competitiveness short of full price regulation (which is extremely unlikely).  They could also open up even larger swaths of unlicensed (WiFi) spectrum at lower 900 MHz spectrum bands (called ISM for Industrial, Scientific, and Medical) and create an effective competitor to 600, 700, and 800 MHz carrier-owned frequencies.  This possibility received a real boost when the WiFi alliance announced the HaLow band at this year’s Consumer Electronics Show (CES).  More from their announcement here.  Cable companies would likely support more 900 MHz WiFi as it would increase the value and reach of their Cable WiFi footprint for both out-of-home consumer web browsing and small business customers.

None of the regulatory scenarios described above consider additional FCC conditions attached to a proposed merger, either with Sprint or another carrier (e.g. US Cellular might be a good fit in the North Central US, but the complex ownership structure with parent TDS would need to be resolved).  Any Sprint acquisition concessions, even under a friendly scenario, could hurt T-Mobile’s current growth trajectory (although they would be acquiring a large base of customers).

While spectrum concerns, new entrants, and increased government regulation could possibly thwart T-Mobile’s momentum, it would require a cocktail of all three plus an economic downturn plus the collapse of global credit markets to derail their locomotive.  $650 porting/switching incentives from Verizon and AT&T implemented in Q1 2016 have not worked.  Claims of an inferior network have not worked (especially as T-Mobile’s network is expanding).  Denigrating their metropolitan focus with racially/ethnically charged word association games has not worked.  And thoughts that management would grow complacent and “take a breather” is a pipe dream.

Bottom line:  It will take a lot of factors, working in tandem, to slow T-Mobile’s progress.  Anything is possible, but as of now, spectrum supply, handset supply, relatively low tablet churn exposure, and improved network quality make continued growth the most likely scenario.

Thanks for your readership and continued support of this column.  Next week, we’ll compare AT&T, Comcast, Charter, Time Warner Cable, and Level3 earnings in less than 200 words.  As a result of the job change, we are not going to accept any new readers, but you can direct them to www.sundaybrief.com for the full archive.  Thanks again for your readership, and Go Royals and Sporting KC!