Greetings from Dallas and Las Vegas, where a couple thousand telecom executives will be converging for this year’s COMPTEL show.  This year’s COMPTEL keynote will be delivered by Terry Jones, the founder of Travelocity.com.  He will be speaking on the role of innovation within business, which has been outlined in his recently published book “ON Innovation.”

In addition to Mr. Jones’ keynote, there are many stellar panel discussions lined up throughout the three day event, including one I am facilitating titled “Maintaining Corporate Policies in an Untethered World.” If you are at the show, please attend this session (Monday, 2:30 p.m.) featuring Bill Weber from Cbeyond, Randy Jeter from a very exciting start-up called RapidScale, and my long-time consulting friend Stefan Bewley from Altman Vilandrie.  You will learn a lot.

Many of you have provided terrific feedback on the www.mysundaybrief.com website, including one of you who spent an hour with us this week understanding the many nuances of WordPress.  Please keep the comments coming and bear with some font and style changes as we continue to refine our presentation.   Note: starting this week, the full Sunday Brief will be posted to the site, not just the links to the Word and PDF portions of the posts.  This means that you can see it very well over your mobile phone without the WordPress app.

Next week, we hope to make a significant announcement about some upcoming changes to The Sunday Brief.  We are still finalizing some logistics, but it will provide each of you an opportunity to make The Sunday Brief an even more powerful force in the telecom and technology industries.  Catch me at the show if you would like a preview.

Earnings season for nearly all of the telecom and cable providers came to an end this week, with SuddenLink, Inteliquent, IDT, Consolidated Communications and others reporting earnings that are consistent with the themes we discussed in previous Sunday Briefs.

This week, we coalesce what’s going on in telecom and technology into three broad themes:

1)      Transition/ Migration as a competitive advantage

We will explore one of these themes in depth in each of the next three Sunday Briefs.  Frankly, it’s the best way to preview first quarter earnings for each of the carriers, and to understand how the larger telecom ecosystem will take shape over the next 12-24 months.  One thing is certain – change is coming, and it’s coming fast.  To coin the motto of my colleague Sherm Henderson, “GO TIME!”

Transition/ Migration as a competitive advantage.  If you are a loyal reader of The Sunday Brief, this theme comes as no surprise.  However, hundreds of you are new to this blog and it bears repeating:  To remain a market share leader, it’s critical to use time (and money) to your advantage.  No turtles win in telecom.   Gone are the days when challenger networks would start with a new technology (e.g., the early attempts at corporate VoIP) and, after reaching a tipping point, the larger incumbents would follow suit.  “Let those eager beavers work out the kinks and we’ll follow with our brand and process” was the way one telecom exec described the previous incumbent philosophy to me this week.

What if Verizon Wireless had taken this approach to their LTE build in 2008?  Would Metro PCS, one of the aforementioned “eager beavers” have risen to a new level of leadership because of their risk-taking culture?  What if T-Mobile or Sprint+ALLTEL (vs. Sprint Nextel) had led in US LTE deployment instead of Metro PCS?  What if Clearwire had focused solely on wholesale and network services instead of riding the retail/ wholesale see-saw?  What would the implications to Zayo and Fiberlight be today if the largest cable companies had embraced Fiber to the Tower (FTTT) in 2005/06 instead of 2008/09?

These are not lighthearted questions.  The most precious commodity the wireless (and wireline) community has is time, not spectrum or fiber.  Just ask the folks working on the following projects:

I could take up the rest of this week’s column describing all of the simultaneous projects going on.  More data centers, more fiber deployments, more LTE.  The point here is that in most respects, each of these companies is catching up to some aspect of Verizon Wireless’ leadership.

This week, Verizon hinted at a Deutsche Bank investor conference at how they were going to extend this advantage (full transcript is here).  This is part of a response from Verizon CFO Fran Shammo to a question about the direction of handset subsidies:

So I am a believer that over the next two to three years subsidies will start to decrease just because of the ecosystem. Then, for us, I think – for Verizon Wireless one other important ingredient for us is obviously we are investing in all this LTE technology. We will ultimately get to voice over LTE, probably end of this year, beginning of next year.  Then if you look out into late 2014 then you start to think of things like, okay, so now I can start to take the CDMA chip out of the phone and just have a pure LTE handset. That also starts to reduce subsidies. So over the next two to three years I think we will start to see subsidies come down. 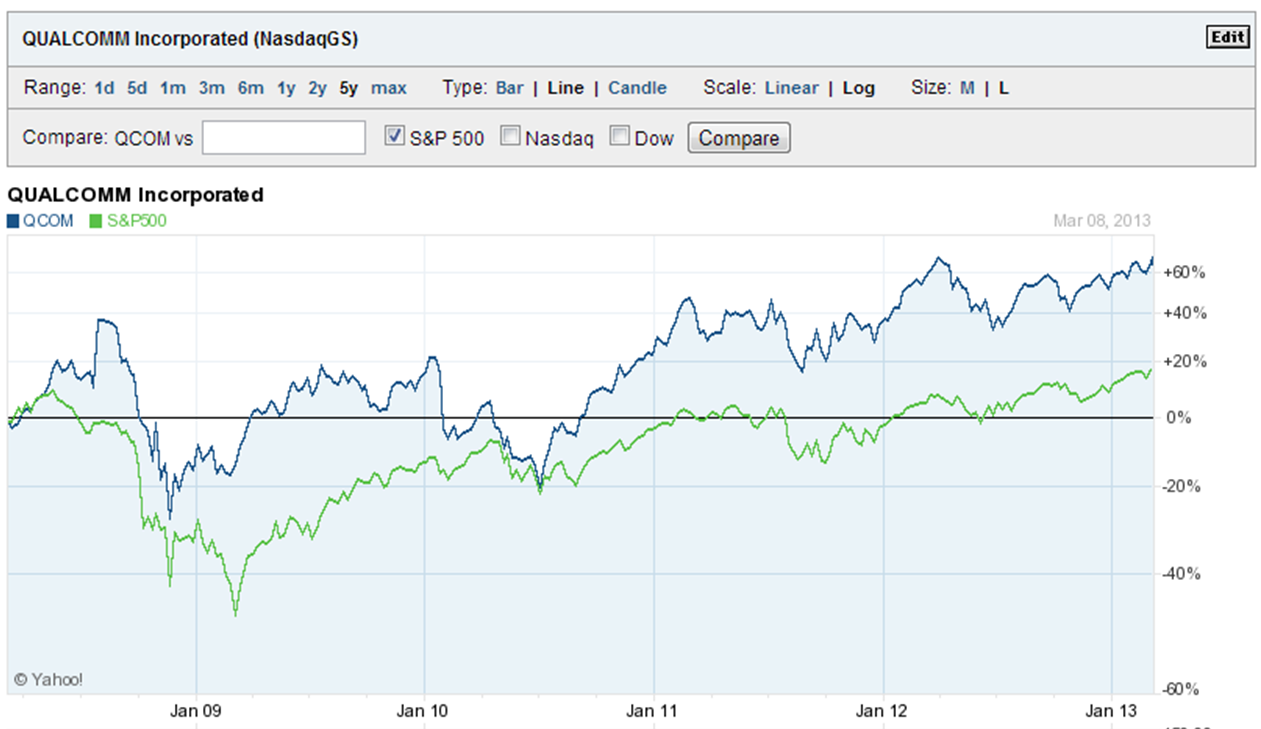 Every wireless CFO’s dream has been to rid their organization of controlling suppliers.  Every industry has them, and there is no greater supplier influence on the wireless industry (except Apple) than Qualcomm.  For years, suppliers have searched for an alternative to the “Qualcomm Tax.”  The rise of Wi-Max was going to change the ecosystem, as was the continued use of Wi-Fi.  Neither worked, and Qualcomm’s share price has risen steadily through it all.  Take the words “LTE handset” above and substitute “Qualcomm-free handset.”  It’s a shot across the bow to Qualcomm but also an olive branch and an open door to LTE-focused chipset manufacturers.

Verizon cannot get to this state fast enough, not only because of the effect on the handset providers, but also because of the competitive advantage that this presents for their shareholders.  Lower cost handsets (or 2x the chipset power for the same price) with stellar battery power and crisp voice operating over a select few bands of spectrum is a dream that will become a reality for Verizon in 24 months.  It’s their next “Droid,” not as a handset, but as an overarching initiative – the drive to eliminate 2G and 3G from their retail platform offerings/ customer experiences.

Imagine the competitive ramifications for this to the industry as a whole.  Sprint’s retail devices will need to access 1xRTT, EVDO, EVDO-Rev A, LTE, and partner (roaming) networks.  They will need to do this across a company-owned network that looks like this (from the Wal-Mart Straight Talk site): 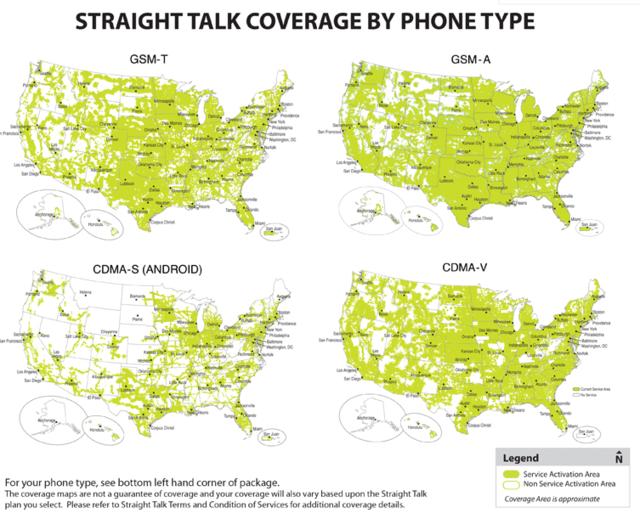 Verizon’s network (lower right) will be completely covered by 4G LTE just in time for the back to school season.  For Sprint to be able to compete with Verizon, they will need to strike an LTE roaming deal with GSM-T, GSM-A or GSM-V or undertake a massive building program.  With higher expectations for low-latency applications, every operation matters to battery life.  With more roaming and multi-network processing, battery life goes down.  Even if Sprint strikes an LTE roaming deal with CDMA-V, the economics of this constrain their ability to be cost competitive.

Verizon’s LTE transition advantage extends beyond the network.  Subscribers receive a more consistent experience – in their car, their office building, and (with help from cable) in their home.  Applications can be “super-charged” over the Verizon network (imagine a completely unfettered Pandora or Spotify experience).  Because of economies of scale, costs come down faster than yields.

When this advantage occurs, the old adage “The enemy of my enemy is my friend” comes into play.  We will see those bedfellows emerge right after we finish up the wave of mergers later this year.  More on that as we cover the next trend, “Exceeding synergy expectations is the ‘new’ expectation,” in next week’s Sunday Brief.

If you have friends who would like to be added to this email blog, please have them drop a quick note to sundaybrief@gmail.com and we’ll add them to the following week’s issue.  Have a terrific week!