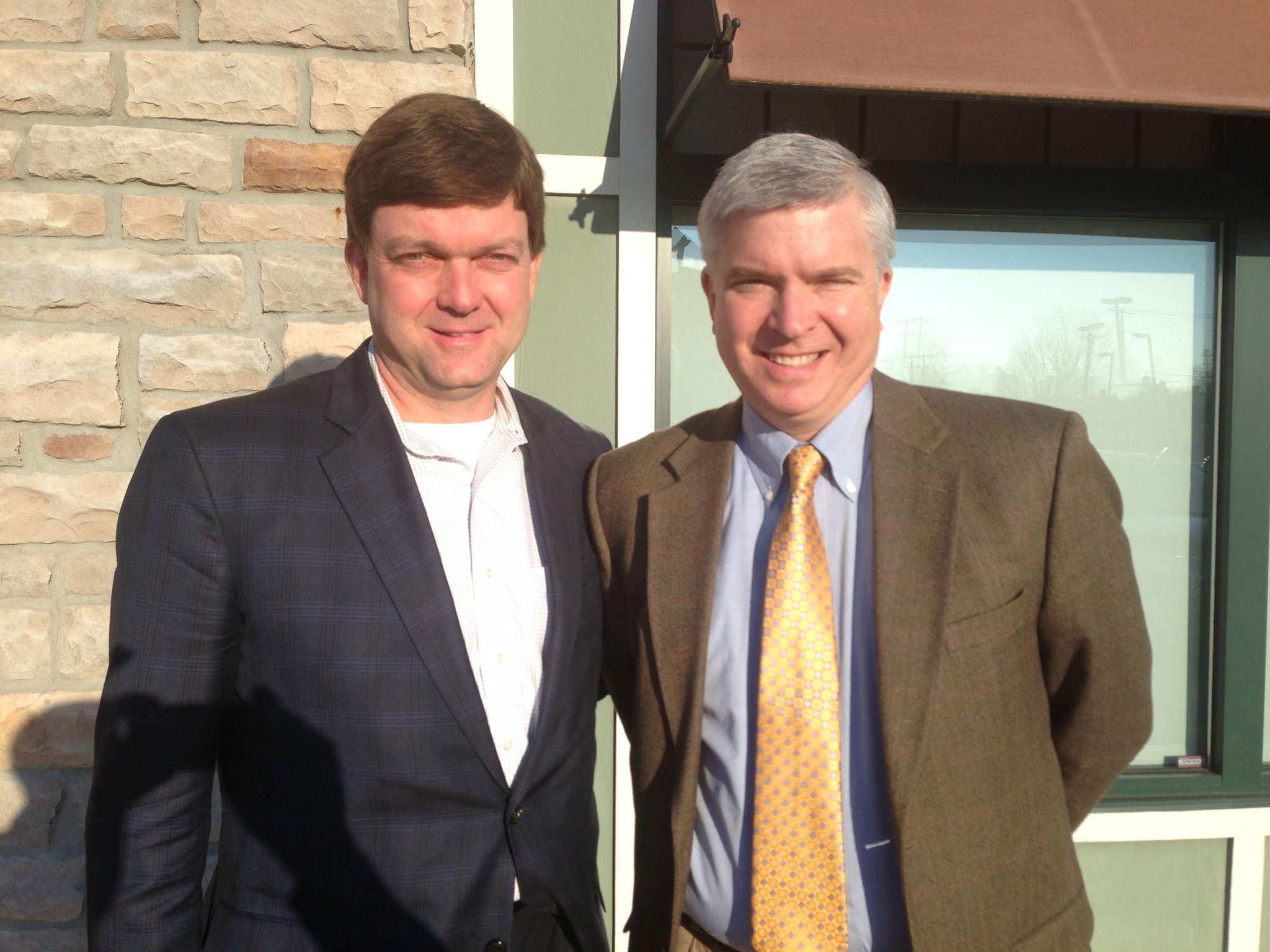 Greetings from Louisville and Dallas.  Pictured with me is David Richardson, Chairman of Louisville-based Learning House and a Darden (UVA B-School) classmate.  What David and his team did to transform and grow Learning House is nothing short of amazing, and the company is extremely well positioned to serve the bipartisan desires of expanded community college opportunities.  More on the company, including the lessons learned from their founder, Denzil Edge, can be found here.

This week, we will cover Verizon earnings and summarize the continuing value shifts occurring in the telecommunications and Internet worlds.

Verizon reported earnings this week (the full index of earnings information can be found here).  Without going through every detail of their 1.99 million retail postpaid net additions (1.4 million of which were tablets), let’s focus on two of the most important figures:  postpaid churn and broadband (FiOS + DSL) net additions.  Next week, we’ll talk about Verizon’s cost of service approach versus their peers (AT&T will make a nice comparison).

The 231 thousand increase in monthly churn over 4Q 2013 translates into a 700 thousand customer increase in takeaway opportunities across the quarter for AT&T, T-Mobile, and Sprint.  While all 700 thousand did not go to T-Mobile, many did, as customers looking to trade in their old iPhone 5 and Samsung Galaxy S4 models did so while changing carriers.  Despite the increase in churn, however, Verizon still posted 600 thousand postpaid phone net additions and grew total accounts by 181 thousand.

Those who analyze the industry can become obsessed with small deviations from expectations.  Frankly, a 0.1% change in Verizon’s churn versus expectations results in 300 thousand more takeaway opportunities for their competitors.  As we discussed last week, higher churn will continue to persist in 2015 as customers who are less happy with their Apple iPhone 5 and Samsung Galaxy S4 smartphones look to upgrade to the latest versions.

Verizon’s approach in the coming year was summarized on the earnings conference call by CFO Fran Shammo:

… At a 1.14% churn rate, you should take that as we did not go to places where we did not financially want to go to save a customer. And there’s going to be certain customers who leave us for price and we are just not going to compete with that because it doesn’t make financial sense for us to do that….with the competition and some of the pricing that’s out there, you should think that we are going to have a higher churn rate because some customers we are just not going to financially keep.

As we said in the preview last week, Verizon did everything they could to serve the highest value customers, and the rest – well, good luck.

What are customers leaving for?  Below are measures of the (heart of Verizon) Boston network performance from our friends at RootMetrics: 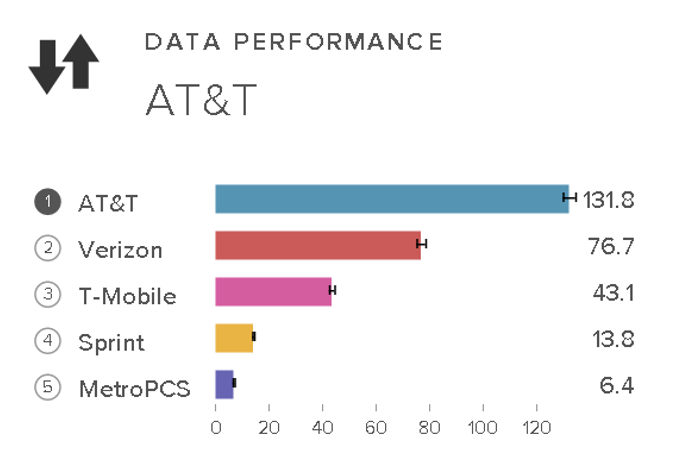 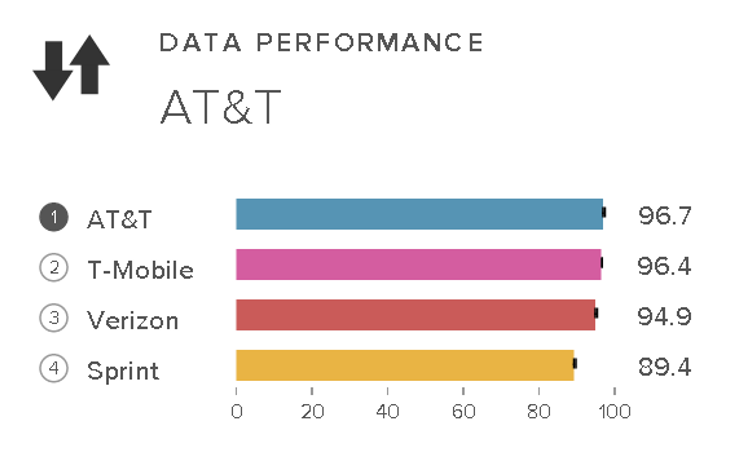 The chart on the left outlines the data performance in Boston in the fall of 2012, while the right shows the performance in the second half of 2014.  While many will take issue with the preciseness of each measure, there should be no question about the direction:  By the end of 2014, in the eyes of some consumers, the striking difference between Verizon, AT&T, and T-Mobile is not apparent.  Data-seeking individual smartphone customers who want 3GB per month for $60 on T-Mobile might not see the value of paying $85 for a similar service.  Have a look at the RootMetrics data performance in Boston, then Massachusetts, then nationally.  The trend is undeniable – data performance differences are minimal in many major US markets.

As I discussed with several of you this week, Verizon has a “highest common denominator” problem.  They need to design the overall network to be able to a) accommodate the consistency expectations of a legacy base of balanced voice+text+data smartphone users with b) the emerging expectations of a data-only, speed-focused, buffered smartphone+ tablet world.

This is why the upcoming launch of (live) broadcast data represents an enormous opportunity to demonstrate Verizon’s competitive advantage – being able to have a clearer voice call over an LTE network is not enough – watching the NFL (or NHL or MLB) must be different.

This is not to take away from a good 4Q (and no one can scoff at 2 million net additions), but there are chinks in the armor and the iPhone 5 and Galaxy S4 upgrade cycles do not bode well for Verizon.  Product differentiation (both breadth as well as quality) can make a huge difference.

Verizon Broadband – Have We Reached the Top?

Little attention is paid to Verizon’s broadband performance – with data penetration of homes passed now exceeding 40%, and nearly 60% of FiOS Internet customers on services in excess of 50 Mbps, many analysts think that Verizon’s market opportunity has peaked.

Not so fast (pun intended) is Verizon’s response.  In December, the company introduced the Quantum Gateway, a router that brings FiOS services into the modern era for $9.99/ month (or $199 for a one-time purchase).  It’s good to see Verizon leading with faster Wi-Fi speeds (the Quantum Gateway has dual band capabilities with 800 Mbps maximum download speeds), and setting up guest access is a “nice to have” for homes where gaming friends might need some restrictions.  But routers come and go, and a similar cable modem package (see here for a comparable Zoom modem offering from WalMart.com on cable’s DOCSIS 3.0 standard) costs 12% less.

Having a modem that satisfies the needs of the majority of FiOS users is table stakes and is not a differentiator.  However, Verizon hinted at something else in their earnings conference call:

We have a strong commitment to customer service and have implemented several new frontline tools that are improving efficiency and increasing customer satisfaction. While we benchmark well against the competition, we have more work to do in 2015 to take our performance to the next level.

A strong modem offering, 50 Mbps speeds, and a superior customer service experience (which comes not only with fiber-based technology but also the merging of wireless and wireline service organizations)…. OK, now things get interesting.  Verizon is going after the heart of the problem – predicting when things could go wrong and being preemptive with solutions to improve the customer experience.

The mere thought that Verizon could make customer service a FiOS differentiator is a stretch.  However, the ACSI Benchmark for Internet Service Providers (see here) has them ranked at the top for the past two years (see here for full rankings), and the “Good, Bad, Ugly” reviews from dslreports.com currently has FiOS rated highest among their peers (see here for latest report).

Bottom line:  Verizon had a great, but not a record-breaking quarter.  They are moving into product and service as differentiators, but, as we will see next week, are doing so with market-leading low cost leadership.   Competitive network architectures pose the greatest threat as data-centric networks meet emerging customer needs for less overall capital than Verizon’s current structure.   Continued high incremental churn will be offset by growing ARPUs within their large and growing tablet base. 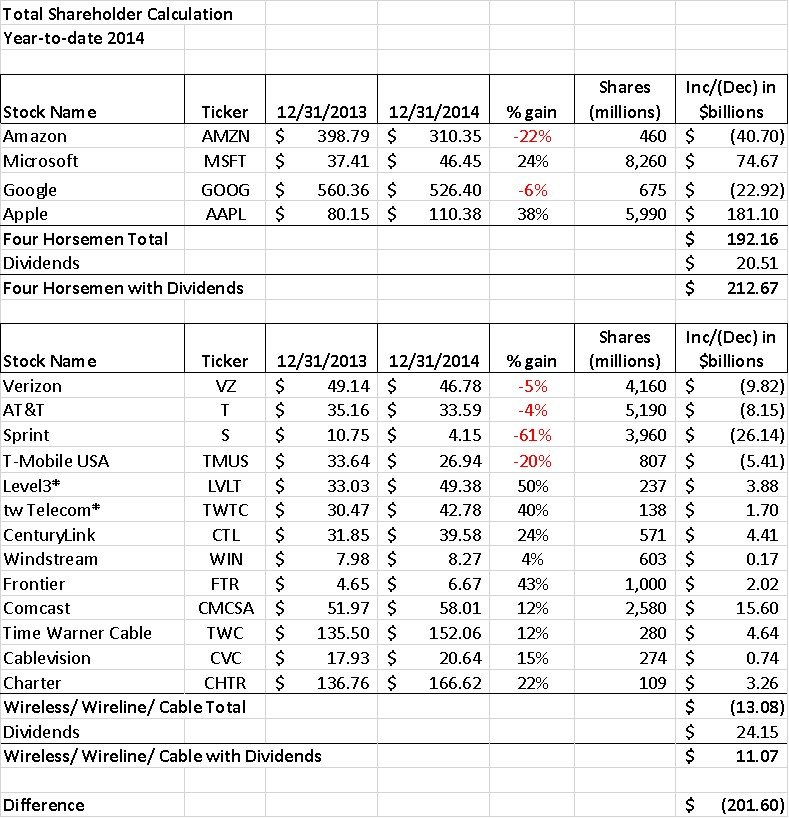 Many of you have inquired over the past weeks about 2014’s Value Tracker.  Usually, we release these results the first full week of the New Year, but several hot topics (namely the upcoming Open Internet/ Net Neutrality rulings) prevented the complete release of the findings.  The attached table shows the final value creation results from 2014.

Not surprisingly, the Four Horsemen came out on top again, creating slightly more than $201 billion in increased market value than their telecom and internet service provider peers.  This is in addition to the $219 billion advantage in 2014 and $58 billion in 2013 (more on the value creation gap in last year’s June strategic planning brief).  The value created over the past three years exceeds the total equity market capitalization of AT&T and Verizon (gulp!).  If current trend continues, the four-year gap will equal all of the equity value of AT&T, Verizon, Sprint, T-Mobile, and the combined Comcast/ Time Warner Cable.  And the figures we have been tracking exclude Facebook and Netflix.

Some other interesting statistics to note:

The combined equity market value of Verizon+AT&T+Sprint+T-Mobile is approximately $407 million (even with debt, they would be hard-pressed to break $650 billion).   Compare this to the combined equity market value of Google+Apple+Amazon+Microsoft, which is over $1.5 trillion (and with Facebook, $1.7 trillion).  Five years ago, they were nearly equally sized.  Something to think about as we discuss who should benefit from the Open Internet and increased government regulation.

Next week, we will look at cost of service in the wireless industry and put AT&T’s earnings under the microscope.  Until then, if you have friends who would like to be added to The Sunday Brief, please have them drop a quick note to sundaybrief@gmail.com and we’ll subscribe them as soon as we can (and they can go to www.sundaybrief.com for the full archive).