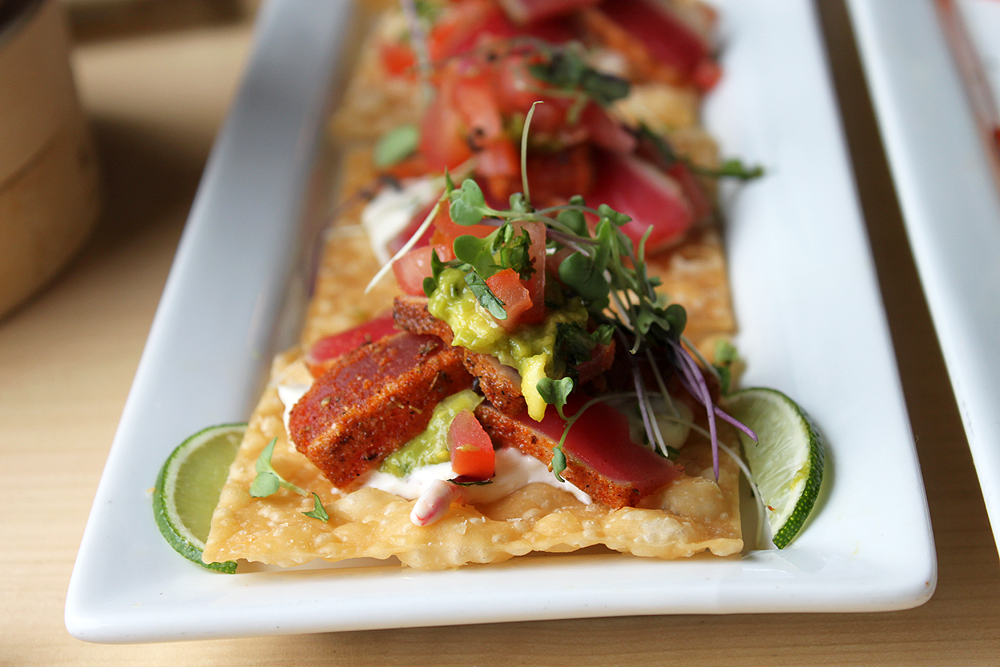 Greetings from Charlotte and Dallas (blackened tuna nachos from The Cowfish Sushi Burger Bar in Charlotte pictured).  It’s been a week full of news, with AWS auctions almost ending, AT&T’s acquisition of Iusacell closing, rumors that the Verizon/ AT&T/ T-Mobile mobile wallet venture (called ISIS Softcard) will be sold to Google emerging, and Sprint bucking the trend with mild but real support of limited implementation of Title II regulations on the wireless industry (a real head scratcher, IMO.  More on their FCC filing in a future Sunday Brief).  This week, we will focus on Verizon and AT&T’s pending quarter and year-end earnings announcements.  Verizon kicks off the telco earnings parade with their announcement Thursday morning, with AT&T and other providers following the next week.

Verizon:  We Are Not Worried 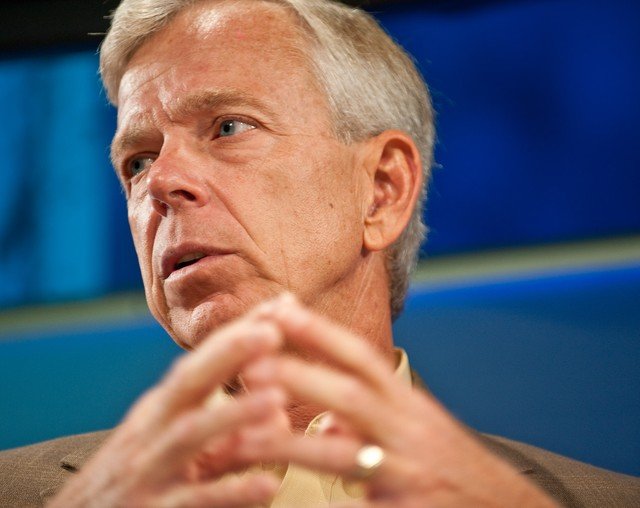 Coincident with the Consumer Electronics Show was Citi’s beginning of the year Global Internet, Media, and Telecommunications Conference.  Kicking off this year’s agenda was a “fireside chat” with Verizon CEO Lowell McAdam.  While the early headlines were about profitability concerns (which had been communicated as early as the third quarter conference call) and AOL acquisition rumors (a likely partnership, but no acquisition in the offing), this interview succinctly provides a glimpse into the operations and strategies of the largest telecommunications provider in the United States.  The link to the full interview is here.

One of the first (and perhaps most interesting) statements of McAdam’s interview was “Competition in the market has always been strong, in my view.  Some of the names have changed.”  This is a shot at AT&T, not at Sprint (see net additions trend below).  Verizon has changed their focus from AT&T to T-Mobile.  Why?  Here’s the rolling postpaid net addition trends for the four largest carriers (note that T-Mobile’s M2M count is not included in these net add figures):

Verizon has enjoyed very strong year-to-date net additions, but many of these have come through connected tablets which typically yield less ARPU than smartphone gross additions.  As we discussed last week, the vast majority of net additions for T-Mobile (82% for 2014) came from smartphones, not tablets.  For AT&T to keep up with T-Mobile’s 2014 net additions they will need to post a whopping 2.5 million in the fourth quarter (extremely unlikely).  For Verizon to keep up with T-Mobile, they will need to add 1.4 million in the fourth quarter, a much more likely possibility.

McAdam did not stop there in talking about T-Mobile (and Sprint).  Here’s hit take on T-Mobile’s participation in the AWS auction and the likely effect it would have on their future pricing flexibility:

“… I know T-Mobile has been in the auction so they will have some debt load associated with that… you have to generate cash and the only way you do that is by profitable growth.”

Simply put, McAdam says that to play to the high rollers table, you need to be ready to ante up a lot.  If McAdam’s intuition is correct, and T-Mobile ends up capturing a good portion of the auction proceeds, they will have more debt, and, even with [Deutsche Telekom] parent backing, they will not be able to borrow at the same rate as Verizon.

As we talked about last week, T-Mobile posted their amazing results without the $100 for 10GB of data offer in the market.  They did it entirely off of iPhone 6/ 6 Plus launch momentum, and my guess is that their share of the iPhone pie in the fourth quarter surprised Verizon (and Sprint).

Verizon’s response has been surgical preemption.  More from McAdam:

We divide our base in actual basis points, so for every 1% of the base we’ve got a profile on how we go in and give them the offers that keep them – keep the high-value ones especially – with us.  So while churn is up a bit and upgrades are probably in the fourth quarter approaching 10%, but those are very positive upgrades for us.  And as I said, the churn is resulting in a higher quality customer that joins the base of Verizon, so as I said we are very happy with the fourth quarter.

Verizon could not be more clear – they did everything they could to keep the highest value customers, and the rest – well, good luck.

Take a second look at the chart above – in 4Q 2012, Verizon posted 2.1 million postpaid net adds (a record that still stands to this day).  According to the earnings transcript from that quarter, there were 1.9 million net new smartphone additions (many of those Samsung Galaxy SIII and the Apple iPhone 5).  Even when divided into smaller segments, that’s a large base to segment and maintain.  It’s not hard to see why the upgrade ratio will be approaching 10% in the fourth quarter.

With tablet sales slowing (although connected tablets should become a higher percentage of what tablet additions remain), T-Mobile’s LTE footprint growing to 300 million POPs, and spectrum positions starting to overlap, Verizon must fight a two-pronged attack in 2015.  Their response to T-Mobile’s competitive advances will need to be closely watched.

AT&T will announce earnings the week after Verizon.  Unlike Verizon, AT&T is in horizontal acquisition mode with FCC approval of their $68 billion DirecTV purchase right around the corner and their Iusacell acquisition completed last week.

As we have discussed for the past several years of The Sunday Brief (dating back to the initial Project VIP announcement in November 2012), AT&T approaches wireless differently from their peers.  To sum it up, AT&T views wireless as a critical and important component to the overall communications needs of consumers and businesses.  This is a very big and broad strategic difference from Verizon, T-Mobile, and Sprint. 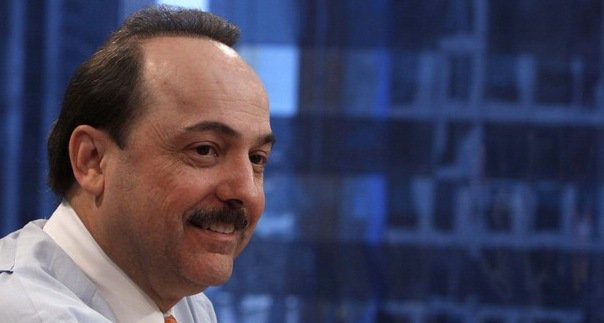 Have a look at Ralph De La Vega’s CNBC interview from the CES show here and his video from the AT&T Developer Summit here.   His focus is not on postpaid vs. prepaid, or even business vs. consumer.  It’s on the secure global interface that connects businesses to their customers.

Here’s what’ on AT&T’s plate at the moment:

There are many mouths to feed across multiple continents.  None of the above figures include the effect of a resurgent Sprint, continued growth at T-Mobile, and a network-focused Verizon.  Is the strategy too broad and is the company spread too thin?  How will AT&T manage multiple complex changes to their network, customer base, growth areas, and organization?  How will AT&T improve wireline, wireless and satellite product integration and customer adoption?  How will AT&T manage this expanded and growing developer and supplier ecosystem?  Most importantly to shareholders, how will AT&T pay $70 billion in debt (likely $85 billion once the AWS auction is complete) and another $85 billion in non-current liabilities (deferred taxes and pension obligations) and pay a 5-6% yielding dividend?

The differences between Verizon’s and AT&T’s strategies are striking, and the results of these diverging strategies should begin to emerge with next week’s earnings.

Next week, we will look at Verizon’s earnings and present our overall market capitalization scorecard for 2014.  Until then, if you have friends who would like to be added to The Sunday Brief, please have them drop a quick note to sundaybrief@gmail.com and we’ll subscribe them as soon as we can (and they can go to www.sundaybrief.com for the full archive).