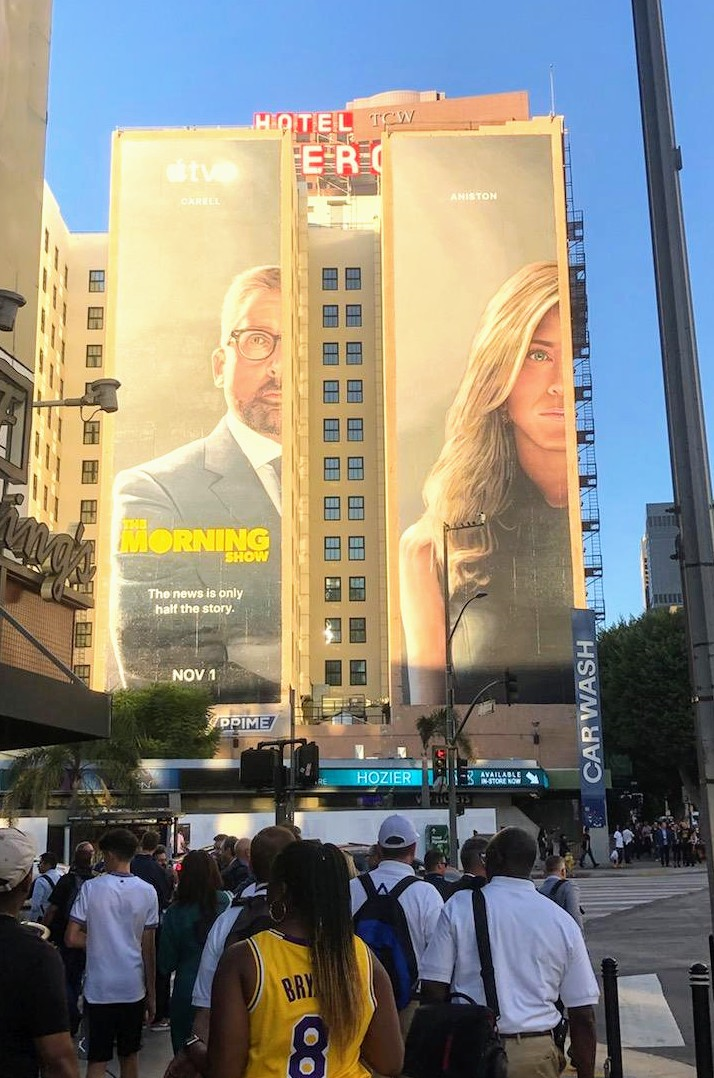 Greetings from the Mile High City, the Queen City, and the City of Angels.  Attendees of the Mobile World Congress – Americas were greeted with multi-story advertisements on buildings touting original content, a reminder that investment in the TMT (telecom/ media/ technology) industry can take many forms (more on this thought when we discuss Verizon’s earnings below).

I had the chance to visit with many of you during the show, and, to a tee, no one was excited to be there.  “Where’s T-Mobile?” was a frequent question, usually accompanied by comments about slow vendor payments or delayed decisions.  Several had “I told you so” comments about Nokia (a summary of their bad week is best captured here).  And the fact that Sprint had the main entrance exhibit led some to theories that should be reserved for late night cable news.

Here’s the bottom line from the show:  Our industry is changing – a lot.  The mobile handset, and the licensed and unlicensed spectrum that it connects to, will be life-changing for nearly all who use it.  And software (largely not present at the show), not hardware, will define value.  More on this can be found from our earlier column “About This Thing Called 5G” in which we define the 5G value statement as “More software… doing more things… faster and better.”  Networks matter (we will see their importance below), but software fuels their engine.

This week, we will look at three companies who announced earnings (Verizon, Comcast, and Charter) and examine the differences in growth strategies versus their industry peers.  As a reminder, T-Mobile and AT&T announce earnings next week, with CenturyLink, Sprint and others following later in November.

Verizon:  Consumer Wholesale and Fiber Save the Day and Seed Long-Term Options

Verizon reported strong earnings on Friday, led by wireless service revenue growth and expense reductions (nearly 14,000 fewer employees in the last 12 months alone).  They had balanced growth in wireless net additions between consumer and business (and phone net adds in both, including public sector, which was a shot across the bow to AT&T’s FirstNet initiative).  And, while they paid down debt, they continued their significant capital spending ($12 billion year-to-date at the consolidated level, up slightly from 2018).

Rather than go deep on each statistic, let’s summarize three areas where Verizon and AT&T are pursuing markedly different strategies: 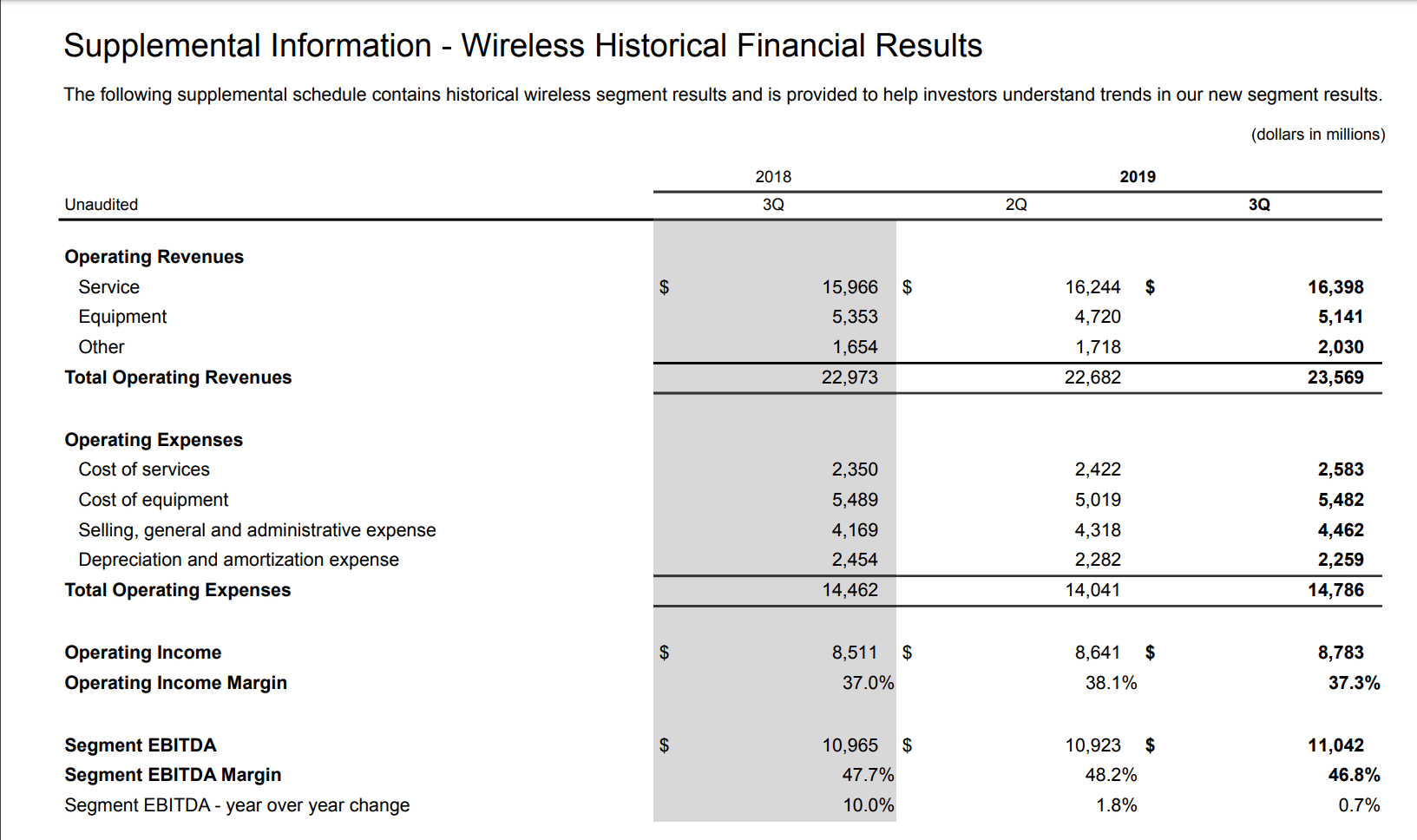 Approximately $376 million of 3Q 2018 to 3Q 2019 growth comes from the Operating Revenues – Other line.  Excluding equipment, operating revenues grew $808 million.  Around half of the operating revenue growth is coming from wholesale, which has no CPGA and carries ~65% EBITDA margins.

Interestingly, segment EBITDA grew a paltry $77 million driven largely by an increase in equipment subsidies ($136 million in 3Q 2018 vs. $341 million in 3Q 2019).  Excluding the equipment subsidy, the $77 million EBITDA growth becomes $282 million (a good proxy for wireless service margin growth).  So, while revenues grew by $808 million year-over-year, only 35% translated into cash.

So on the wireless cost of service side, I mentioned that the phone net adds split was fairly even between Consumer and Business. Business had a more than 10% increase in phone gross adds. … a lot of our Business customers are still on a subsidy model rather than device payment model, so I think you see the impact of that.

What this says is that the negative margin impact from consumer retail growth (and write-downs thanks to new unlimited pricing plans) is being covered by consumer wholesale.  Without cable and Tracfone, the story line would have been very different.

The other major item that escaped the headlines is the continued fiber build in 60+ metropolitan areas outside of the Verizon franchise territory.  At the end of the earnings conference call, Matt Ellis called out the fiber impact:

… we’re rolling out more fiber as you know in our One Fiber initiative that is going to give us more opportunities to sell into those customers as they move off of legacy products and our fiber build has continued to gain momentum, increased at a little bit in the third quarter of over 1500 route miles a month on average in the quarter. So we’re getting to a good momentum there and that will open up additional opportunities for us as we go forward to replace those legacy volumes

An additional 20-40K route miles of fiber hitting the market starting early next year will not go unnoticed and marks a very different strategy from AT&T out of region, particularly for enterprise customers.  As that number accumulates (1,000 route miles means a lot in a city like Birmingham, AL or Albuquerque, NM).  And, as others have correctly noted, that fiber is largely being connected to wireless telecom infrastructure and not commercial real estate (an entirely different build/ approval process).  But it’s different because it’s a highly leverageable asset (this is a “Fiber Always Wins” case to quote a previous TSB article).  We have previously talked about the impact of the CenturyLink build (4.7 million fiber miles), but not as much about Verizon’s One Fiber initiative.

Lastly, the Disney+ announcement stands in stark contrast to what we will likely hear from Time Warner/ AT&T executives on Tuesday (free HBO for AT&T customers started to leak last Friday – see CNBC article here).  Content production with telco cash balances is unknown territory.  At a minimum, it dilutes management focus from strategic items like infrastructure buildout and fiber competitiveness.  More likely, it locks in AT&T to HBO and other Time Warner content at the expense of other options (as opposed to Verizon’s “playing the field” strategy of Apple Music last year, Disney+ this year and next, and maybe something entirely different in 2021).  We will have more to say on Disney+ vs. HBO Max in next week’s TSB (and why we think Apple Music lessons learned over the last 12 months prepares Verizon for a very successful Disney partnership), but it’s worth thinking about the value of the content selection option.

Bottom line:  Verizon’s earnings message was focused on wireless service revenue and content deals.  Their profit growth is increasingly being driven by non-retail sources, however.  One Fiber could translate into Enterprise market share gains if management quickly re-builds their local out of region wireline capabilities.  Verizon looks less and less like AT&T each day.

Comcast had a record quarter on broadband growth, with 359K residential and 20K business net additions.  The 359K figure is the highest net additions for any quarter since Q1 2017 (first quarters tend to be promotion-driven and Comcast was in the middle of DOCSIS 3.1 adoption at that point – no such tailwinds existed in 3Q 2019), and according to Brian Roberts, the most for any third quarter in ten years.  Penetration of homes and business passed grew to 48.2%.  Not only did subscribers grow, but total revenue grew as well, as existing customers upgraded their service and promotions expired.

The talk track for Comcast residential broadband is this:  New homes/ dwellings are being built, and Comcast is grabbing disproportionate market share from AT&T U-Verse (Chicago/ Houston), Century Link (Seattle/ Utah) and Verizon FiOS (Boston/ Philadelphia/ Washington DC).   In turn, existing customers are increasingly satisfied with their products and services, which keeps non-mover churn in check and increases bundling and upgrades.  We are ready for all broadband challengers. 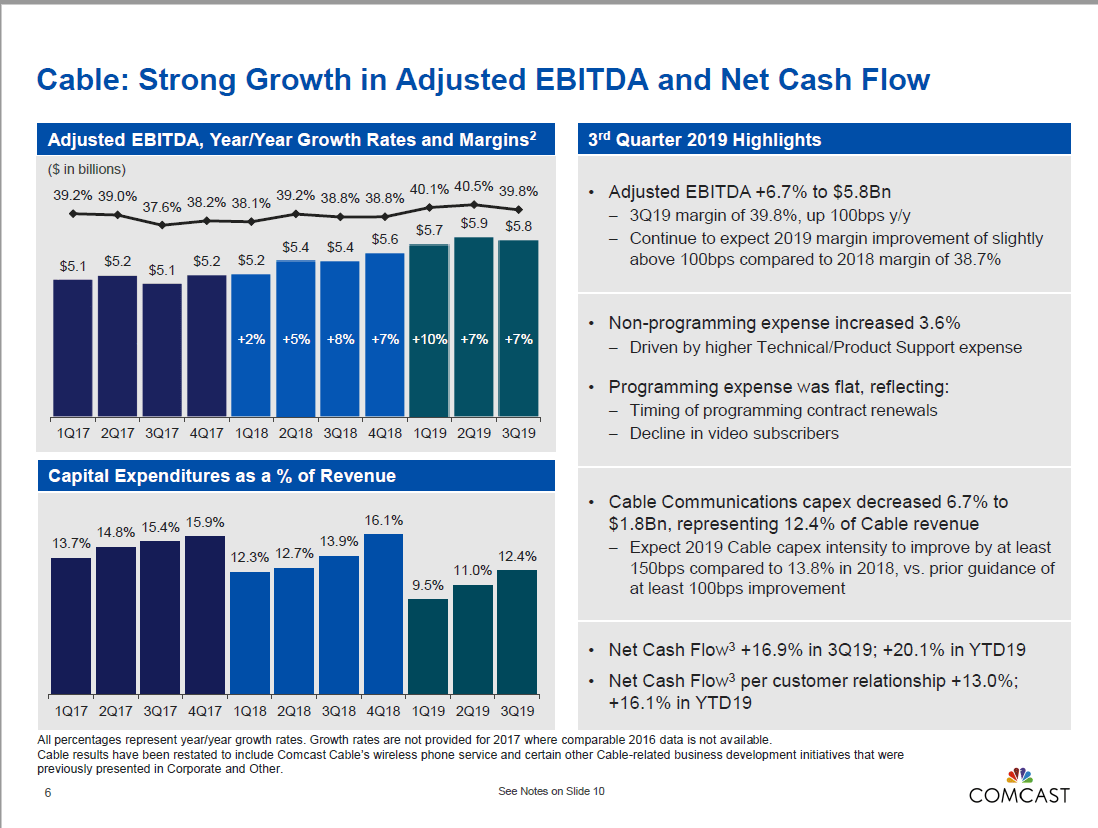 One would think that Brian Roberts and Michael Cavanagh could drop the microphone and walk away.  And, had Altice not deployed a very aggressively priced MVNO on Long Island using Sprint’s network, most analysts would have changed their questions to deal with softball topics like theme parks, debt and buybacks.  The Altice deployment drove many questions, including (TSB paraphrases of the questions based on the conference call transcript):

Of the ten questions in the Q&A, five (at least partially) dealt with the MVNO business.  Putting this into perspective, wireless represents slightly more than 2% of the 3Q 2019 Cable segment revenues and just over 1% of total 3Q 2019 corporate revenues.  Even on a growth basis, wireless was $90 million out of $561 million growth from 3Q 2018 to 3Q 2019 (16%) and would be an even smaller number if we excluded the advertising revenue drop.  Why so much interest in wireless? 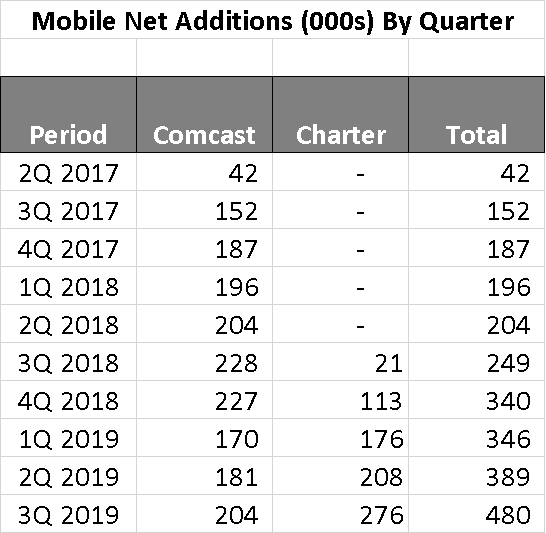 Another answer is to look at wireless growth in light of the large High Speed Internet base.  Comcast had 1.689 million average wireless subscribers in Q3 against 25.811 million average High Speed Internet subscribers.  Assuming 1.8 Xfinity wireless lines per household (a figure below 2.0 assumes that By the Gig is more popular with individual/ single line users than other family-focused plans), 1.689 million subscribers would translate into roughly 940,000 households or below 3.7% penetration of current Xfinity household accounts (note that as the 1.8 lines per household grows, the penetration level shrinks).  That’s an underwhelming figure given the 2.5 years Comcast has been actively marketing retail wireless services.

Nearby is the updated net additions growth chart for both Comcast and Charter.  It’s very interesting to note that since 4Q 2017, net additions have been running in a very tight range.  In fact, the four quarter net additions rolling average ranges from a low of 196 to a high of 214 – a close-fitting cluster.  It appears that Comcast is being more deliberate in their growth strategy (in effect placing a 200K quarterly growth governor) in anticipation of additional events.

We have no doubts that Comcast has a long-term wireless strategy, and that it involves increased licensed and unlicensed spectrum ownership and operation at some point.  But we also understand that every piece of content added to the package hurts gross margin and keeping up with AT&T/ HBO and Verizon/ Disney is going to be difficult without offload.

Charter also posted very strong growth with 351,000 net High Speed Internet additions and 276,000 wireless subscriber net additions.  This translated into $4.1 billion in EBITDA which included $145 million in total mobile EBITDA losses (across 656,000 average monthly subscribers, this equates to a loss of $74/ average customer/ month which is better than where Comcast was after their first five quarters of service).  Charter has grown slightly faster in their first five quarters of wireless service than Comcast did, and CEO Tom Rutledge believes that their sales productivity is just getting started. 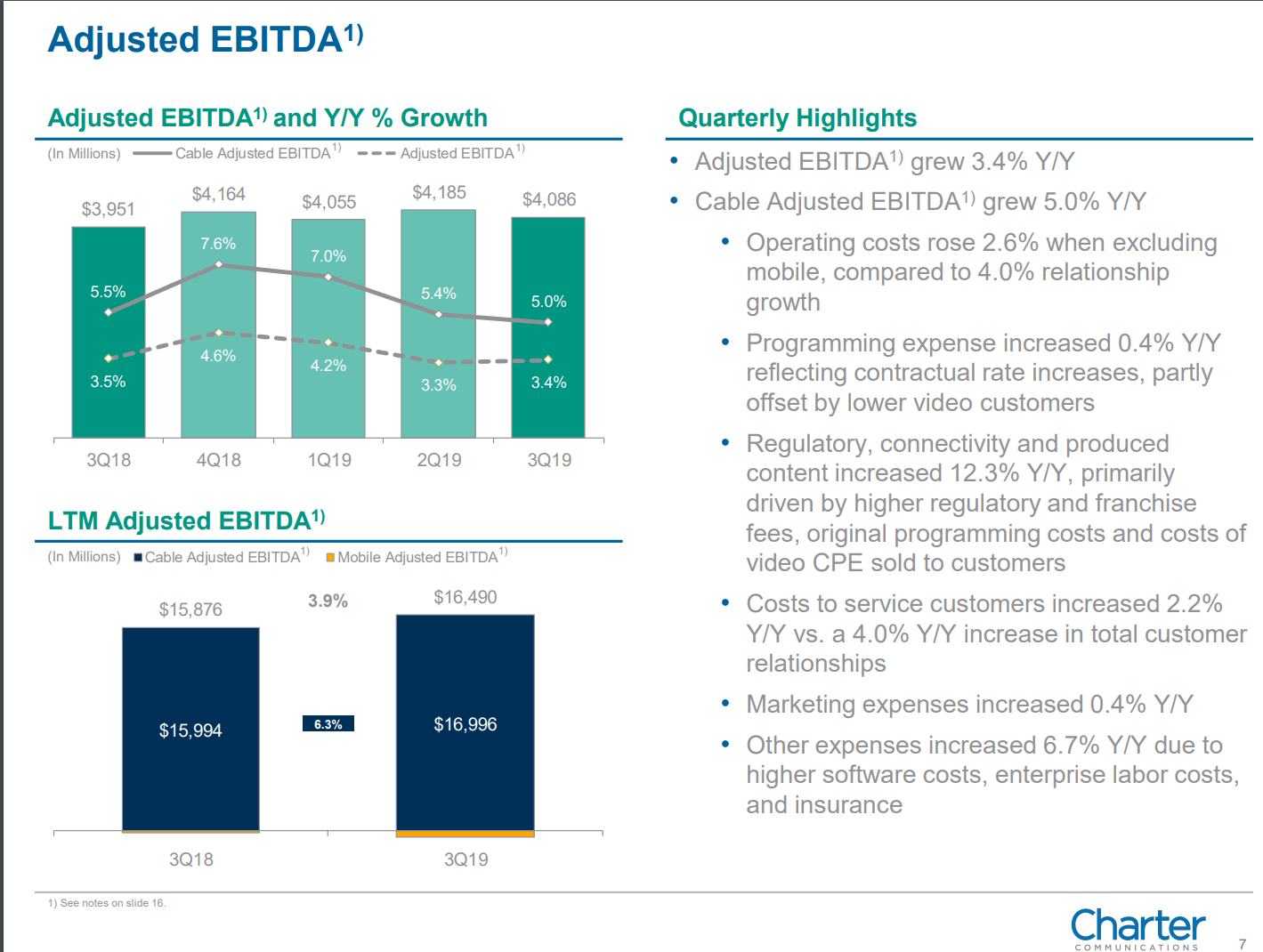 In the Question and Answer section of their earnings call, Charter reiterated their increased growth trajectory on both wireless and broadband, and also reiterated that they are looking at CBRS across a wide variety of fronts (rural wireless expansion, highly congested areas, etc.).  Charter did not mention any changes in their wireless strategy with respect to business, but it’s likely that small business expansion (< 20 lines) will continue to grow in 2020.

Bottom line:  The tone of the Charter call was completely different than Comcast, reflecting the differences between the companies.  Content discussions focused on retransmission agreement progress (with an acknowledgement that customers will see some increased costs), and there were absolutely no international discussions.  It’s clear that Charter wants to a) hit the 1 million subscriber milestone by the end of the year, and 2) continue to realize scale efficiencies in wireless.

Next week, we will incorporate AT&T’s Time Warner Cable analyst day, AT&T quarterly earnings, and T-Mobile earnings into the discussion.  Until then, if you have friends who would like to be on the email distribution, please have them send an email to sundaybrief@gmail.com and we will include them on the list.