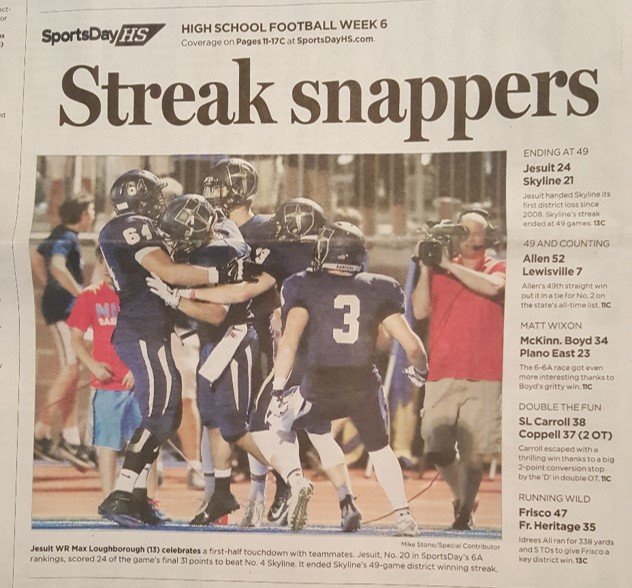 October greetings from Seattle, Atlanta, Charlotte, and Dallas.  While this was a very heavy travel week, airline schedules were friendly and I was able to make it home to see Jesuit College Prep (where my son is a senior and varsity offensive lineman) end the 49 conference-game-winning stranglehold of Dallas Skyline.  The Dallas Morning News sports section headline in the lead picture says it all.  While the team thought that this might be the year, it took a come-from-behind touchdown with 1:06 left in the game to convert excited hopes into stunning reality.  Friday Night Lights in the Lone Star State – there’s nothing quite like it.

This week, we will cover the other five top events of the quarter.  Thanks as always for your comments and suggestions.

On Monday (tomorrow, for most of you reading this), there will be an 11 a.m. ET call featuring Roger Entner (Recon Analytics), Jan Dawson (Jackdaw Research), Charles Golvin (Abelian Research), and myself. We are going to touch on a variety of topics (Title II, handset selection strategies, overall industry dynamics) and there should be some time at the end for Q&A.  The call is free.  Please register here to get all of the details. 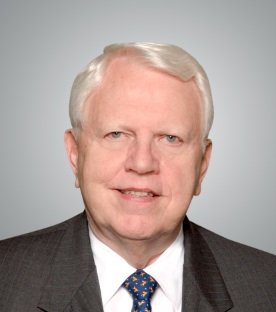 We lost a wireless industry titan in September.  Roger Linquist, founder of MetroPCS and a friend to many Dallas entrepreneurs, passed away mid-month at the age of 77.  His obituary says it all – odds beater, hard worker, risk taker, pioneer, family man.  Nearly all of the former Metro PCS employees I talked to over the past two weeks loved working with Roger, and everyone had a story to tell.  He will be missed in the Dallas business community and throughout the wireless industry.

The Remaining Top 10 Events of the Third Quarter

Last week, we covered five events/ trends that will impact third quarter, total year, and 2016 results (these are in no particular order):

For those of you who have been regular Sunday Brief subscribers, the end of handset subsidies is not a surprise.  Market trends were already pointing towards a non-subsidy world:

Subsidies have died, and it’s going to hurt Best Buy and others who depended on them to drive sales.  Couple this with the continued rollout of Amazon’s Prime Free Same-Day Delivery and Sprint’s Direct 2 U plans, and the real losers from this change are wireless retail distributors.

If you are not a frequent cross-border traveler, these changes are not going to change your decision to use one carrier over another.  For the 30 million US wireless customers who routinely use their device in a country different from the United States, the changes initiated by T-Mobile (global reductions in roaming voice rates, and inclusion of free messaging) and accelerated by AT&T (unlimited borderless calling to Canada and Mexico for $100 and up data buckets) could not come at a better time.  Perhaps the airport SIM card dispensers will go the way of airport payphones.

Google learned a lot from their first deployment in Kansas City (MO and KS).  As this Fast Company article points out, having fast Internet speeds is not as important to many low income neighborhoods as it is in wealthier locales.  Google’s 75% penetration in higher-end fiberhoods is great, but 30% in poorer sections of the Kansas City metro represents a real challenge.

Their cable and telco competitors are catching up.  Comcast is already offering 2 Gigabit per second speeds (symmetrical) in a few neighborhoods in Atlanta (and growing), and Time Warner Cable is ramping up its Maxx efforts in Charlotte and Raleigh-Durham.  AT&T is now obligated (thanks to the FCC’s “concession” extracted during the DirecTV merger discussions) to offer Gigapower services to 12.5 million locations.  It will be interesting to see the reaction to these offers when these cities are actually deployed.

Couple this with Comcast’s acquisition of Contingent Network Services, a very reputable managed services provider based out of Cincinnati, OH (a Time Warner Cable territory), and everything is shaping up for a fiber-based competitor to AT&T and Verizon for domestic opportunities IF their smaller cable colleagues (including Charter + TWC + Bright House) agree to provide connectivity at competitive rates.  It will also be very interesting to see how Comcast will tackle international connectivity.

On top of this, Sprint announced plans to cut up to $2.5 billion in additional costs out of the business.  This comes on the heels of an 11% workforce reduction in the first year of Marcelo Claure’s tenure and complicates the “improve network to #1 or #2” goal (and, from the most recent RootMetrics results in Harrisburg and Scranton (PA), as well as Baton Rouge and New Orleans (LA), Sprint’s speeds are not keeping up with competitors (see more here). The $2.5 billion figure also does not include any positive effects Sprint will receive from increased leasing (less subsidies, less Equipment Installment Plan long-term accounting effects).

If the reductions are headcount-focused, the majority will likely come from one of three sources:  Front line employees working in retail stores (a tough decision), network (a really tough decision), and customer service (which has already seen several reductions thanks to simplified pricing plans put in place by Dan Hesse).  Sprint’s details concerning how they will reduce costs will likely impact their ability to refinance $2.0 billion of debt which is due in 2016.  Details will likely come throughout the rest of this year, but the CFO’s note has certainly raised anxiety levels across the company.

This certainly provides plenty of content for third quarter earnings reports.  Next week, it’s time for the “It’s an Android World” semi-annual report as we head into the Holiday shopping season.  Until then, please invite one of your colleagues to become a regular Sunday Brief reader by having them drop a quick note to sundaybrief@gmail.com. We’ll subscribe them as soon as we can (and they can go to www.sundaybrief.com for the full archive).  Thanks again for your readership, and Go Royals!