Three More Up and Comers

Greetings from Fraser, CO, where near zero temperatures are the norm in December.  We hope each of you have a very restful and happy Holiday season.  2020 promises to be an eventful year and we will be here to follow every inch of it.

Due to popular demand from our September column titled “Three Up and Comers” which highlighted three companies who had demonstrated enough progress to warrant significant investments (updates on each below), we are ending the year highlighting three additional companies who are impacting the telecom landscape.  Next week, we will have a book review of Steve Coll’s landmark work “The Deal of the Century: The Breakup of AT&T.”

The AGs v. T-Mobile/Sprint Trial Has Ended – What Happens Next?

Here’s a brief summary of what happened over the last two weeks in the T-Mobile trial:

As other analysts have noted, the odds of approval were boosted by Ergen’s and Legere’s testimonies (and hurt by Claure, Combes, and other Sprint executives).  From reading various accounts of the trial Twitter feeds and transcripts, it’s apparent that Judge Marrero is fully cognizant that if he rules with the state AGs, he’ll be ruling against Assistant Attorney General Makan Delrahim and FCC Chairman Ajit Pai.  That may be the deciding factor – Judge Marrero will clearly need to explain why the DOJ settlement is too risky and anticompetitive (and not create a firm basis for appeal).

A lot of things can change between now and January 15.  The states had a weak series of arguments going into the trial, and they did not materially advance their position.  However, there’s more than a slight political tinge here — foreign to previous telecommunications mergers (including T-Mobile/ MetroPCS and AT&T/ Cricket Wireless in the Obama administration, and Sprint/ Nextel, Sprint/ Clearwire, and Verizon/ Alltel Wireless mergers in the George W. Bush administration).

Bernie is Out of the Slammer

In case you missed the news, convicted felon and former CEO of Worldcom, Bernie Ebbers, is scheduled to be compassionately released this week according to news reports (New York Times and Wall Street Journal articles are linked).  Ebbers, now 78, is suffering from dementia.  While we have significant issues with the way he led Worldcom (TSB that examined the fraud a decade later is here), we wish the best for him and his family as he is treated.  It’s a good reminder of how much our industry has evolved over the past two decades.

Update to the Previous “Up and Comers” Class (Starry Wireless, Cologix, and Helium)

Before discussing the new trio of new companies to watch, it’s worth updating the status of the three we covered back in October:

As we noted in a subsequent TSB, we should have had CBRS pioneer Federated Wireless on the original list, and there are plenty of updates where we have highlighted their progress.

New additions to the “Up and Comers” Class

To be considered an “Up and Comer” a company must have had a funding round in excess of $30 million in the calendar year that they are selected and have an influential or disruptor status in their area of expertise.  Here are three companies that we think are excellent additions to the four above:

(latest Funding round of $40 million led by Uniquity Partners closed December 10).  We have discussed fiber a lot in the last several months, starting with the TSB “Fiber Always Wins (Until it Doesn’t)”. Netly’s corporate description is as follows:

“We provide the layer 1 digital infrastructure that Service Providers need to innovate and build the ultimate internet experience for their end users. We deliver dedicated, unsplit fiber strands to every location in a city, and our tenants provide the end-to-end electronics to light the fiber. We offer long-term wholesale contracts to world class service providers so they can deliver 21st century solutions.” 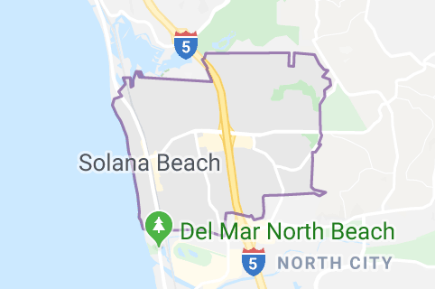 The most interesting aspect of this description is “every location in a city.”  This is a critical driver for Internet Service Providers such as Ting Internet, who announced that they would be lighting up Solana Beach, California after Netly completes their deployment in 2020.  It will be very important for wireless service providers like Verizon Wireless and T-Mobile/Sprint (assuming they are merged), who will be able to immediately access critical fiber strands at reasonable prices.  (Interestingly, Solana Beach is served by AT&T, yet a search of both zip codes on Broadbandnow.com reveals that only DSL-based Internet services are available.  Perhaps AT&T will come calling!).

Netly is run by two former Nextel executives (Jack Demers and Jim Hanley) and advised by former Sprint Nextel Chairman Tim Donahue and former Nextel Chairman and telecom pioneer Morgan O’Brien.  $40 million is a drop in the bucket for fiber construction, but, if they show that they can make the plan work (I think they will receive significant demand), the model for municipally-controlled, independently managed networks for second and third-tier markets might be feasible (we are skeptical as to its national ubiquity, but they have a host of strong partners behind them).

Managing the conversion from wireline to wireless (led by 5G and NB-IoT) is quickly becoming the firm’s specialty.  Onecom has also successfully completed four acquisitions over the past six years.  We will focus on their secret sauce in an upcoming TSB (hint: it’s about smart employees who are focused on technology transition and business productivity), but thought that the investment above, combined with an additional credit line of 30 million pounds from HSBC, warrants “Up and Comer” status.

(2019 funding of $33 million includes $8 million Qualcomm Ventures investment which closed on December 12; total funding of $59 million since inception.  Largest investor is Insight Ventures).  The word augury is defined as “a sign of what might happen in the future” in the Cambridge English Dictionary.  We have been following this company since the summer, and the Qualcomm Ventures investment a few weeks ago rekindled our interest.

Augury describes their business purpose as follows: “We combine artificial intelligence and the Internet of Things to make machines more reliable, reduce their environmental impact, and enhance human productivity.” Simply put, the company listens (via installed sensors) to machines, establishes a baseline of the soundwaves, temperature, and magnetic field data that’s produced, and then uses artificial intelligence to detect abnormalities. 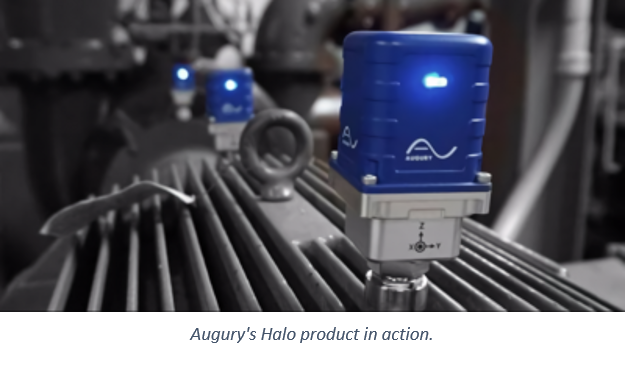 The New York-based company has established relationships with 40 of the Fortune 500, which is amazing considering they have been in business for eight years.  Saar Yoskovitz, Augury’s COO, has a background in speech recognition, which uses the same soundwave patterning (to convert into a search string) that would be used in an industrial machinery application.

What makes Augury unique is their integration into business operations software which extends the utility of their products beyond predictive failure to total business productivity.  This allows managers to focus on improving overall asset utilization and improving defect rates.  That’s different from the performance of their predecessors.

How broadly Augury can extend their product line is anyone’s guess, and that’s likely what has attracted large telecom investors such as Qualcomm.  As sensor capabilities continue to advance (another future TSB topic), and as their baseline analytics continue to improve, Augury’s value will grow.

That’s it for this week.  Next week, we’ll close the year with another book review (Steve Coll’s “The Deal of the Century: The Breakup of AT&T”).  Until then, if you have friends who would like to be on the email distribution, please have them send an email to sundaybrief@gmail.com and we will include them on the list.

Also, I’ll be at CES this year on the 7th and 8th.  We have set up a special Sunday Brief table at Gordon Ramsay’s Pub & Grill at 7:30 p.m. on Wednesday January 8 – only five slots available, but please reply to sundaybrief@gmail.com if you are interested in attending.

Have a great week… and GO CHIEFS!