Greetings from Kansas City (BBQ pictured – no “scratch and sniff” available for this photo), Columbus (OH), Charlotte, and Dallas.  This has been a busy travel week, and it has been difficult to reply to the myriad of responses I received to last week’s set-top box article (if you missed it, the link to the article is here).  One commenter had a very thought provoking statement: “How would Google react if the FCC moved to disintermediate their search results screen and allowed third party providers to provide their own ‘best search results for you’ screen?”  While not a perfect comparison, it does show how the Electronic Programming Guide is increasingly becoming a brand representation and competitive differentiator for Xfinity and other service providers.  Given the number of comments, we’ll continue to track the NPRM throughout the spring.

Value Tracker 2016: Dividends Are Back in Fashion

As many long-time readers of this column know, we like to track long-term value creation.  Daily and weekly returns can be impacted by the news cycle, but longer-term trends are rarely budged.  Below is the snapshot of equity returns (excluding dividends) through last Friday using end-of-year share counts provided by each of the carriers in their quarterly/ annual reports: 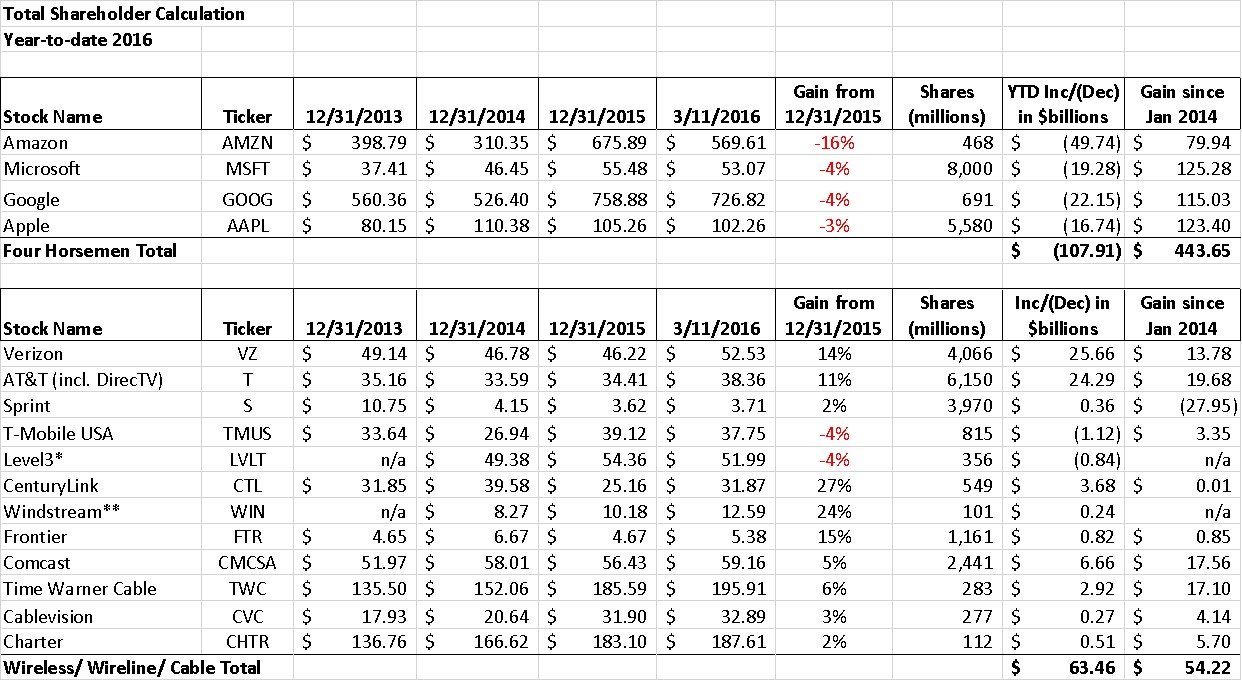 It is no coincidence that the highest dividend-yielding stocks are performing well through the market turbulence of the first quarter.  Verizon (4.3% trailing dividend yield) is up a healthy 14% year to date, with over $25 billion in increased equity market value.  AT&T (4.9%) is not far behind.  CenturyLink, Windstream (which includes 1/5th of a Communications Leasing share), and Frontier are also attracting a lot of newfound interest.

Can this trend last?  It’s hard to say.  We have seen a lot of interest in dividend-yielding stocks at the beginnings of other years (2014 being the latest) only to see growth stocks come roaring back in the second half of the year.  That was during a low, but not negative, interest rate environment.

While the rest of the globe is trying to revalue their currencies and spur growth through short-term stimulus plans, stocks like CenturyLink look safe and secure.  Nothing in their latest earnings report would drive such robust short-term gains; it’s a global safety play.

Over the long-term, it is interesting to see how Google, Apple, and Microsoft are driving nearly identical absolute shareholder gains since the beginning of 2014.  It’s also worth noting that all of Apple’s gains during this period are in the first year, while Microsoft’s gains have been steady and Google’s gains came entirely in 2015.  Regardless of the timeline, any of these three companies (or Facebook) would have lapped the entire telecom and cable industry for shareholder value creation over the past 2+ years.  Something to think about as we head into the earnings season.

T-Mobile has had a couple of strong first quarters of net postpaid additions (in 2014 and 2015, the first quarter was the strongest of the year), and they have been led by a combination of strong gross additions (taxing advantage of tax season liquidity) and incremental improvements in monthly churn.  Subprime credit quality tended to catch up with T-Mobile in subsequent quarters, and Braxton indicated on the call that they were tightening credit standards in the first quarter.

T-Mobile’s monthly postpaid and prepaid churn figures are shown in the above chart.  Assuming T-Mobile had a good but not great gross add quarter with gross activations (this would drive a higher average subscriber base with minimal/ no churn), it’s reasonable to expect a postpaid churn rate of 1.25%.  As a reminder, every one half of one percent (0.005%) increase in monthly churn equates to a 158,000 improvement in monthly ending subscribers.  Said differently, if T-Mobile came in at an average rate of 1.25% (which I think exceeds most expectations), the quarterly effect on their 31.7 million base would be approximately 475,000 net additions.

T-Mobile has a lot of levers to play with here.  For example, they could tighten up credit standards even more as lower churn rates are achieved, resulting in lower gross additions but still hitting their overall net postpaid additions target.  This is unlikely given Braxton’s comments that T-Mobile “will certainly be taking up their growth guidance”, but it’s still a possibility.

It’s more likely, however, that T-Mobile will hit 2.4-2.5 million postpaid gross additions (or more) while at the same time churning out 1.2-1.3 million subscribers.  Here’s why:  a) more 700 MHz devices deployed across more geographies means less coverage-related churn; b) Binge On is not proving to be a selling obstacle or a churn accelerator, but rather a differentiated feature, and c) there’re more tablets in the 2014 gross addition mix (especially in the fourth quarter), and they tend to churn less than phones.

One thing was learned from the webcast: significant growth will not be coming from 700 MHz or LTE market expansion gross additions in the first quarter.  Braxton clearly made it out to be a 2H 2016/ 1H 2017 growth story.

This event will come as a surprise to many industry observers, but Sprint’s super-aggressive lease offerings last September and October, as well as the resumption/expansion of the “Half Off” promotion at the end of 2015 brought out the majority of the “want to (re)investigate Sprint” segment.  With a good but not blockbuster launch of the Galaxy S7/ S7 Edge last week, as well as increasing pressure from AT&T with equipment discounts for enterprise and small business customers, finding new growth from quality credit sources will be tough.

A neutral result (+/- 150K net additions) that is driven by tablets is likely to have a negative effect on Sprint’s 2016 revenue prospects.  Sprint will prove adept at cutting costs, but translating improved network results into sustained customer growth and profitability is still several quarters away.

Given the completion of Cricket integration into AT&T, the next logical step would be to grow the bundled program through the addition of Cricket + DirecTV plans.  These would target customers who spend $150/ month for both wireless and video (the current plan targets customers who spend $250 more more).  More importantly, this could expand distributor opportunities for DirecTV and Cricket (if the same store is not selling these services already).

While this quarter’s AT&T earnings release will likely be focused on Mexico milestone achievement as well as DirecTV progress (and postpaid churn reduction), a Cricket headline would be a welcome surprise.

Next week, we’ll focus on three wireline headlines and examine a few other wild card events (such as the “In the Loop” Apple announcement in late March) that could shape the earnings season.  Until then, please invite one of your colleagues to become a regular Sunday Brief reader by having them drop a quick note to sundaybrief@gmail.com.  We’ll subscribe them as soon as we can (and they can go to www.sundaybrief.com for the full archive).  Thanks again for your readership, and Go Sporting KC!