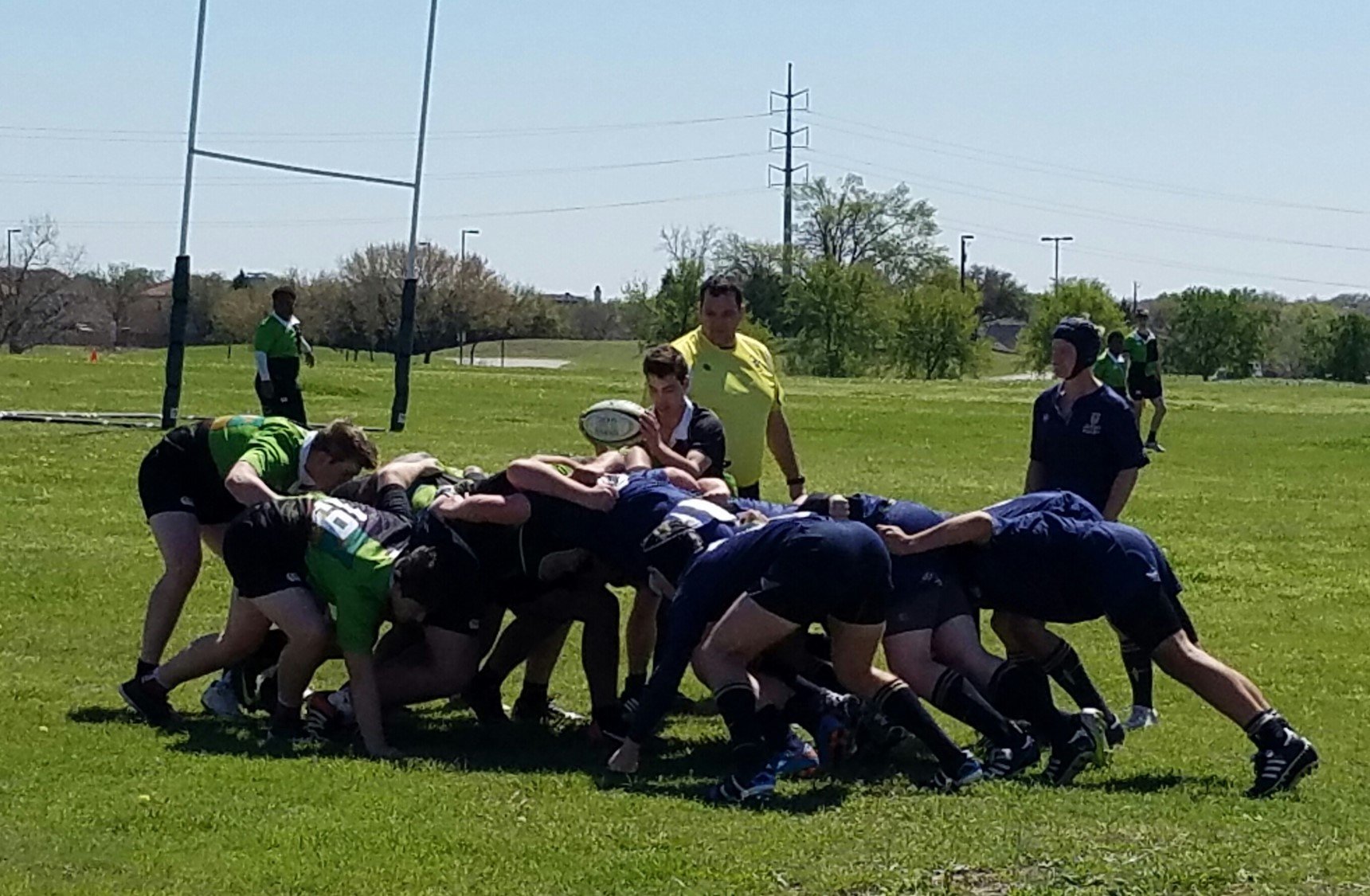 As a reminder, we will not have a column next week because of the Easter holiday.  If you begin to suffer withdrawal symptoms, pick a column or two that you did not get a chance to fully digest and send me your thoughts on where I could improve my views of the telecom world.

This week, we’ll dive into three headlines that will impact first quarter (and 2016) earnings.  But first, a quick look at the latest development with T-Mobile’s Binge On! product and a quick peek at what Apple has up their sleeve for Monday’s “Let Us Loop You In” event.

This week, the telecom and Internet worlds came together with the announcement that T-Mobile’s Binge On! service would now support YouTube.  Specifically, T-Mobile announced that they would allow content providers to opt in or out of which video streaming feed they used on an individual case basis.

As most of you know, T-Mobile (including Metro PCS) and Google have had a long-standing relationship.  When Google was not announced as a Binge On! partner, many were surprised but we commented that “bringing YouTube into the Binge On! catalogue was a matter of time.”

T-Mobile did this by smartly changing their policies.  First, they will allow any video service provider to opt out of the service and will publish this list on their website.  Second, they will allow content providers to self-manage their own video streams and optimizations.

This is a big deal, and it’s hard to believe that others will not adopt these policies.  As we discussed with T-Mobile a few weeks ago, they received a one-time 10-15% capacity improvement the change to Binge On!, and the total traffic growth should be lower than their un-optimized competitors. Another good move for T-Mobile, and a catch-up opportunity for the rest of the industry.

For more on T-Mobile’s changes, check out this video from T-Mobile CEO John Legere.

Apple’s “Let Us Loop You In” Event: What’s the Big Deal?

On Monday, Apple will likely announce several things, including a smaller (less than 4.7 inch screen) iPhone and (less than 10 inch screen) iPad Pro tablet.  Both products could be big deals for the company and for consumers.  See previews from Ars Technica and Engadget here and here.

Eighteen months ago, the iPhone 6 and 6 Plus had not been announced.  People were used to the tallish but narrow feel of the iPhone 5 and 5s, as well as the compact feel of the iPhone 4s (Apple devotees consistently tell me that the iPhone 4S was a groundbreaking device for its time because of its processing capabilities and overall functionality.  I agree).  Then came the iPhone 6 which drove lots of volume.  Now, however, there is a small but significant “mini crowd” who wants to be able to have a pocket-sized smartphone with the latest processors but not a mega-screen.  The closest analogy I can use is in the automotive world with the rise of the “f-Type” from Lexus (5.0-liter engine with 467 hp on a wheelbase less than 110 inches – more specs here).

Can these two announcements, combined with other operating system improvements, lift Apple out of their current doldrums?  A smaller iPhone will definitely help, and a smaller iPad Pro will allow many of the previous improvements (including the Apple Pencil) to be leveraged.  Net-net, this should be a needle mover for Apple.

Headline #1: “Charter’s Merger with Time Warner Cable and Bright House Networks is Approved.” This almost seems inevitable with reports this week that the FCC is circulating a draft of a conditional approval.  According to an article in The Wall Street Journal (see here; paid subscription required), it appears that newest concession would bar Charter from “including clauses in its pay TV contracts that restrict a content company’s ability to offer its programming online or to new entrants.” While it’s likely that Charter would not prohibit the development of competitive over-the-top solutions, it’s equally unlikely that they would abandon their volume-based per subscriber pricing from content companies.

According to the North Shore Advisory, the most important item to get hammered out with the FCC is the compliance window.  Charter agreed early on in the approval process to 1) no data caps; 2) waived interconnection fees with companies such as Netflix; 3) no paid prioritization and premium services designed to improve their content or services over others.  But they only agreed to this for the three-year period following approval.  Assuming at least half of the 36-month term is taken up with a) broadband expansion, and b) building systems and processes to handle a prioritized, un-neutral business model, three years could go by pretty quickly.  Longer than that could complicate things, especially if the courts rule against some or all of the FCC’s recent Open Internet Order (their decision is due within the next month; click here for the 2014 ruling). 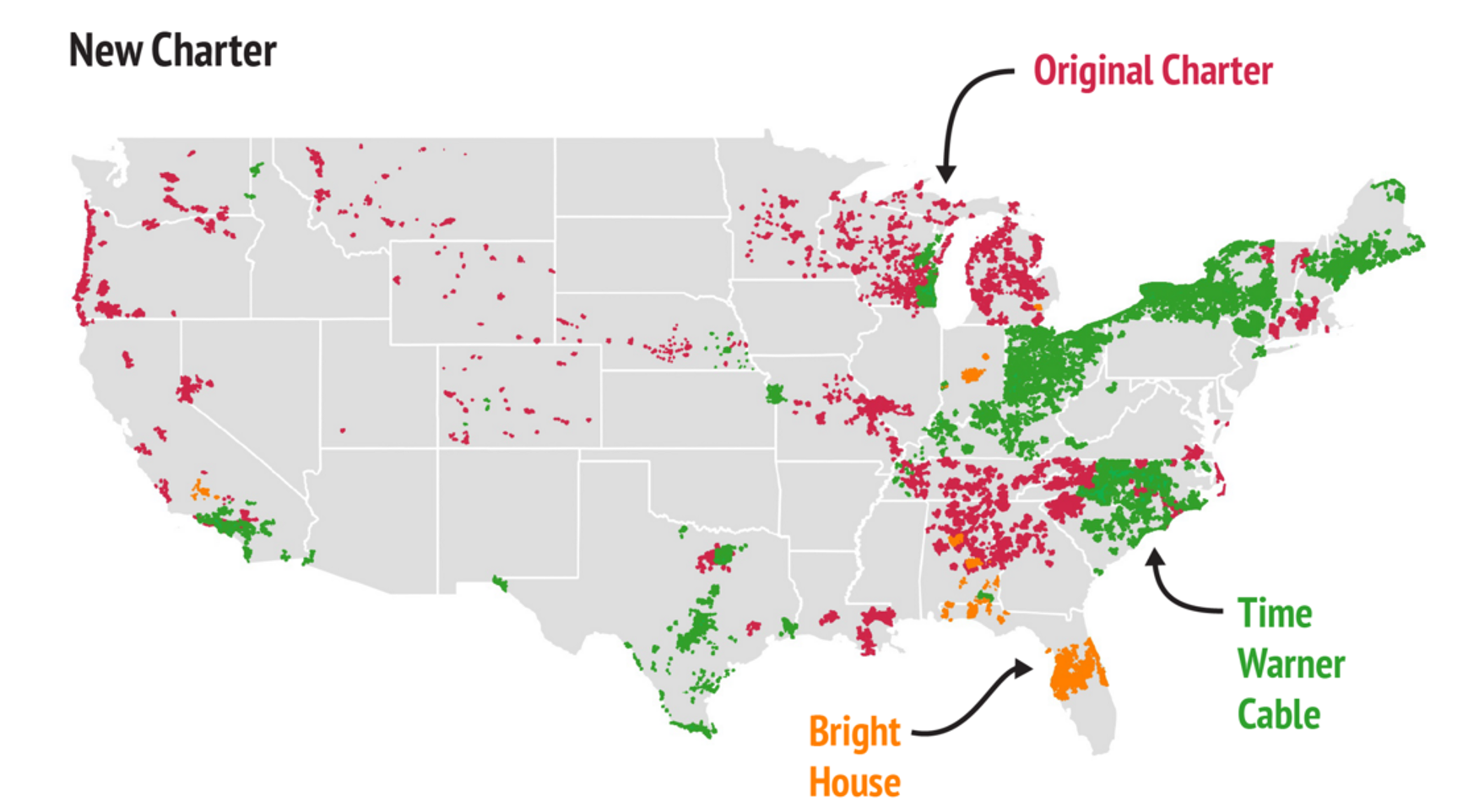 An interesting article also appeared in Investor’s Business Daily this week suggesting that Comcast and the new Charter could enter into a series of property exchanges to further improve their respective company economics after the transaction. While no specific properties were mentioned, there continues to be a lot of fragmentation in Connecticut, New Jersey, South Carolina, Louisiana, and Kansas City (to pair with Charter’s St. Louis property).  It’s even possible that Cox Communications could enter the deal-making fray with a swap of their lucrative northern Virginia properties to build a stronger Midwest or California presence.  It’s very unlikely that any major properties will be swapped (except Maine), but a lot of incremental value can accrue to trading parties from these after-merger transactions.

After FCC approval, the California PUC still needs to vote on the merger on May 12, and, judging from the hearing held earlier this year, Charter appears willing to cut a deal to get it approved.  New York City gave their approval on March 9 with moderate but reasonable concessions (see Bloomberg article here).

The opportunities created by the combined company (especially with some moderate re-clustering) are going to be great.  The new Charter will be a stronger competitor to AT&T in California and a stronger defender against a resurgent yet concentrated FiOS footprint in the Northeast.  And the new Charter is a few billion dollars of investment away from having very dense Wi-Fi coverage in their top 10 metropolitan markets (see Dallas coverage improvement article here), which is a lot cheaper than buying a wireless company or entering into an MVNO with Sprint or T-Mobile.

Headline #2: “AT&T Loses Broadband Customers.” I hope this headline is wrong and that AT&T will report moderate to significant gains because of their Velocity IP investments (which were great).  However, there’s no indication from John Stephens’ latest investor presentation that this headline will take place in the first quarter.  Here’s the eight quarter trend from AT&T’s last earnings report: 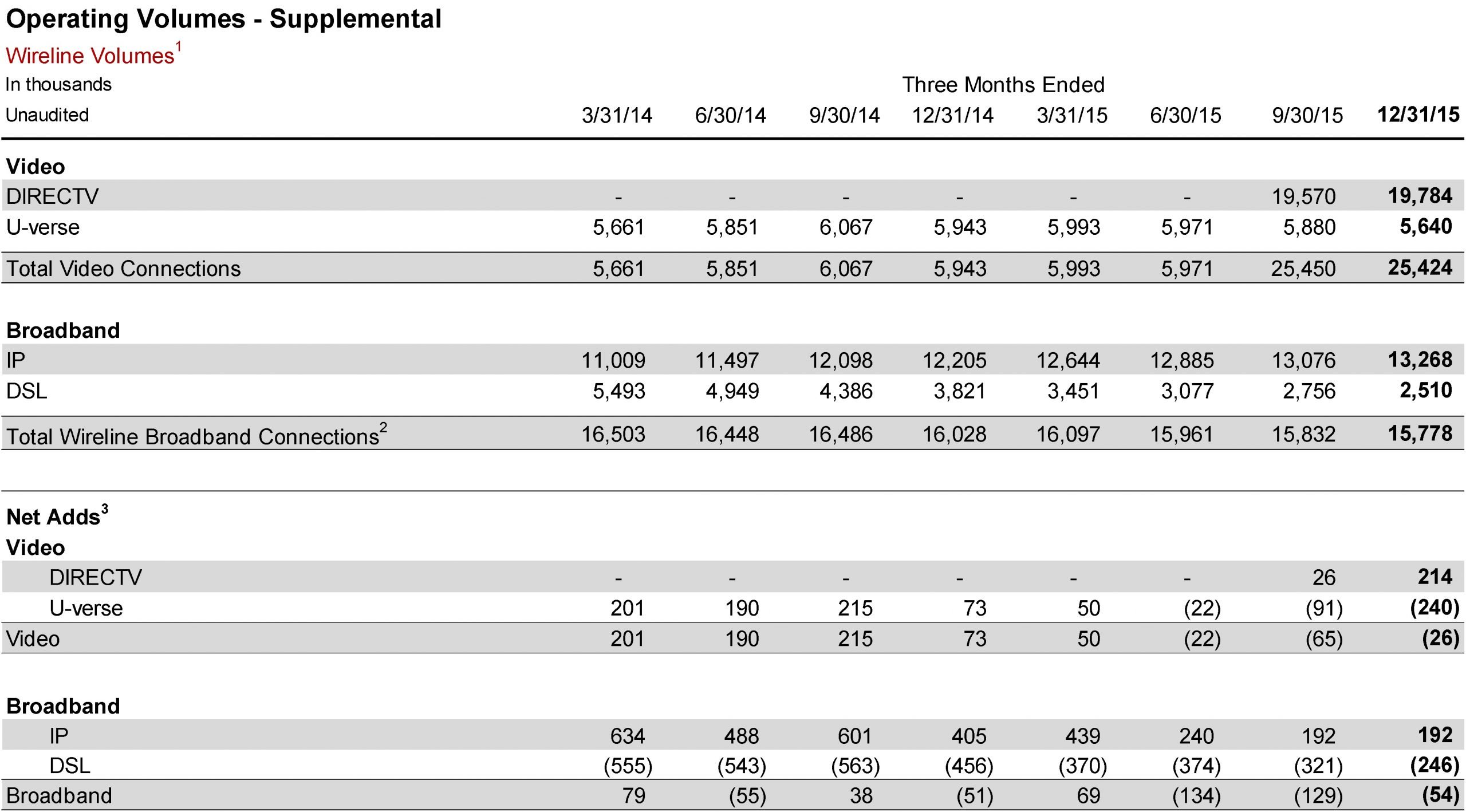 The issue with AT&T is attraction, not conversion.  It no surprise that the DSL platform is shrinking, but one would expect that if AT&T’s broadband platform were valuable and attractive, net additions would exceed DSL losses.  However, AT&T’s IP broadband net additions slowed significantly in the last three quarters of 2016, down 51% in Q2, 68% in Q3, and 53% in Q4.  As a result, the company lost 200,000 more broadband connections in the last three quarters of 2015 than the last three of 2014.  The new product is selling to some existing customers, but is not wooing existing cable customers away.

To be net add positive for broadband customers in the first quarter, AT&T will need to grow at least 290-310K IP broadband subscribers and keep DSL losses on their downward trajectory.  Nothing in AT&T’s latest commentary (specifically CFO John Stephens’ comments at the Deutsche Bank conference on March 10) would lead investors to believe that consumer broadband revenue growth is a strategic priority for the company (or that it’s even a priority).

When asked about competitive capabilities, Stephens cited the 14 million home fiber buildout as an FCC “commitment” and he quickly shifted from making home broadband profitability a priority to the value of having a common shared fiber infrastructure (which their cable competitors have been putting into place for close to a decade).  There is no doubt that a local fiber presence will help in comparison to Sprint and T-Mobile (or even Verizon in AT&T’s region), but does AT&T face diseconomies of scale because they have under-invested in building a residential broadband brand?  Can a residential strategy be complete without including broadband?

Stephens’ comments create a stark contrast to cable:  AT&T is focused on everything but broadband (Mexico, DirecTV integration with wireless, cost synergy achievement, enterprise growth), while cable companies, CenturyLink, and Frontier are singularly focused (or nearly so) on broadband.  That should give investors pause: the prospects of slow/ no broadband growth in what has historically been a strong quarter for AT&T sets the stage for a rocky 2016 growth picture.  More broadband focus (including some soul searching on what will drive competitive advantage versus cable, Google Fiber, and other third party overbuilders) is needed.

Headline #3: “Comcast Business Posts Twenty Percent Growth.” It’s hard not to read a Sunday Brief that does not include something about the commercial services growth, but, in case you are not aware, Comcast and much of the cable industry has been growing commercial services revenues like a weed for the past seven years, and Comcast now has $5 billion in annualized run rate revenues (still 5x+ smaller than AT&T, 3x smaller than Verizon and about 50% smaller than CenturyLink, but a strong showing nonetheless).

In particular, the year-over-year revenue growth for Comcast Business Services has been very consistent and robust over the past eight quarters:

To no one’s surprise, the first quarter tends to be the strongest as projects get kicked off, budgets are approved, and weather improves.  What is incredible, however, is the growth rate through the subsequent quarters.  With more capital being allocated within Comcast to medium and enterprise services, the opportunity to consistently grow at 20+% rates should exist for the next three years (if they hit it, the result is an $8.7 billion unit in 2018 and might be the largest provider in many/ most of their service footprint).  By contrast, the prospects for business services revenue declines of 2-4% at AT&T and 3-6% at Verizon for the next 3-5 years.

As Brian Roberts indicated earlier this month at an investor conference, Business Services is very accretive to earnings and has attractive payback periods.  The value proposition is based on fast connectivity at affordable rates and tends to carry 24 to 36-month terms.  As was seen at the Channel Partners Show last week, they are definitely investing in distribution.  Provided that cooperation continues with their cable peers to provide a national footprint, high growth rates should continue for Comcast Business Services for the foreseeable future.

That’s it for wireline headlines.  After our short break for the holiday, we’ll dive back into industry analysis.  Until then, please invite one of your colleagues to become a regular Sunday Brief reader by having them drop a quick note to sundaybrief@gmail.com.  We’ll subscribe them as soon as we can (and they can go to www.sundaybrief.com for the full archive).  Thanks again for your readership, and Go Sporting KC!