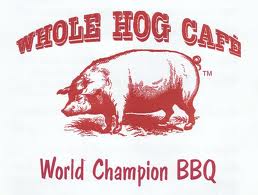 Greetings from Little Rock, Tampa, Atlanta and Dallas (the picture is of a local BBQ joint in Little Rock that I highly recommend).  This was a relatively light news week in the telecom news world, with newsworthy items including the announcement of a new Comcast/ Time Warner JV to manage the Reference Design Kit (RDK) for next-generation set-top box devices, Cisco’s earnings release and announcement that they will have a fairly significant global layoff, and Wal-Mart reported same-store sales declines, sending shivers up the back of all suppliers (including each wireless carrier) to the retailing giant.

There was also a swift response from AT&T on T-Mobile’s recent proposal for the upcoming 600 MHz spectrum auction process (opinions welcome), and, in a feeble attempt to steal some of Apple’s thunder, Samsung will reveal a smart watch in early September.  If you use search services as a part of your job, you may have noticed a several minute Google outage on August 16 – here’s CNET’s take on the story.

It’s good to have a quieter week as this has been a summer full of changes across the industry.  It also allows us to go back and take a deeper look into the larger trends that are affecting both the wireless and the wireline industries.

Each of the wireline publicly traded companies has announced earnings, and, with the exception of AT&T and Verizon, the themes are the same:

Most of these themes have been discussed in previous earnings analyses.  In this week’s column, we are going to look at some underlying data that support these themes.  First, as the economy recovers, certain states will enjoy the benefits faster than others.  Here’s a table of states where job growth is leading and lagging (click here for source information):

Importantly, only three of the top 10 states will have added enough jobs to make up for those lost during the previous recession:  Utah, Texas, and Colorado (end of year).  This means that commercial office building starts (e.g., think new hotels on the Vegas strip and in Honolulu) will lag, but job growth will continue.  (Note:  Hawaii is a unique case as 28% of the population works for the federal, state, or city governments.  Unemployment may be low, but if Japanese tourists do not return, employment will not recover to pre-recession levels).

States with asterisks also are three of the highest new home start/ building permit states, excluding the effects of Superstorm Sandy.  Texas, Colorado, and Utah accounted for 16% of the increase in new construction permits in July and make up 19% of all year-over-year permit growth (a great stat for only 11% of the US population).

With the rise of job growth in the West and South, it’s no surprise to see the increased presence of CenturyLink as the incumbent phone provider of choice.  What is interesting is to see the power of an Embarq/ Qwest combination, adding capabilities to Nevada, North Carolina, South Carolina, and Florida.  In each of these states, growth can occur with minimal new capital investment – capacity utilization and corresponding cash flow increases.

It’s also interesting to note the absence of job and housing start growth in Verizon and some AT&T territories.  It is likely that Tampa is the sole bright spot for telco revenue growth in 2013 for Verizon.  It’s also no secret that AT&T will need a strong California performance to deliver wireline earnings that exceed expectations. 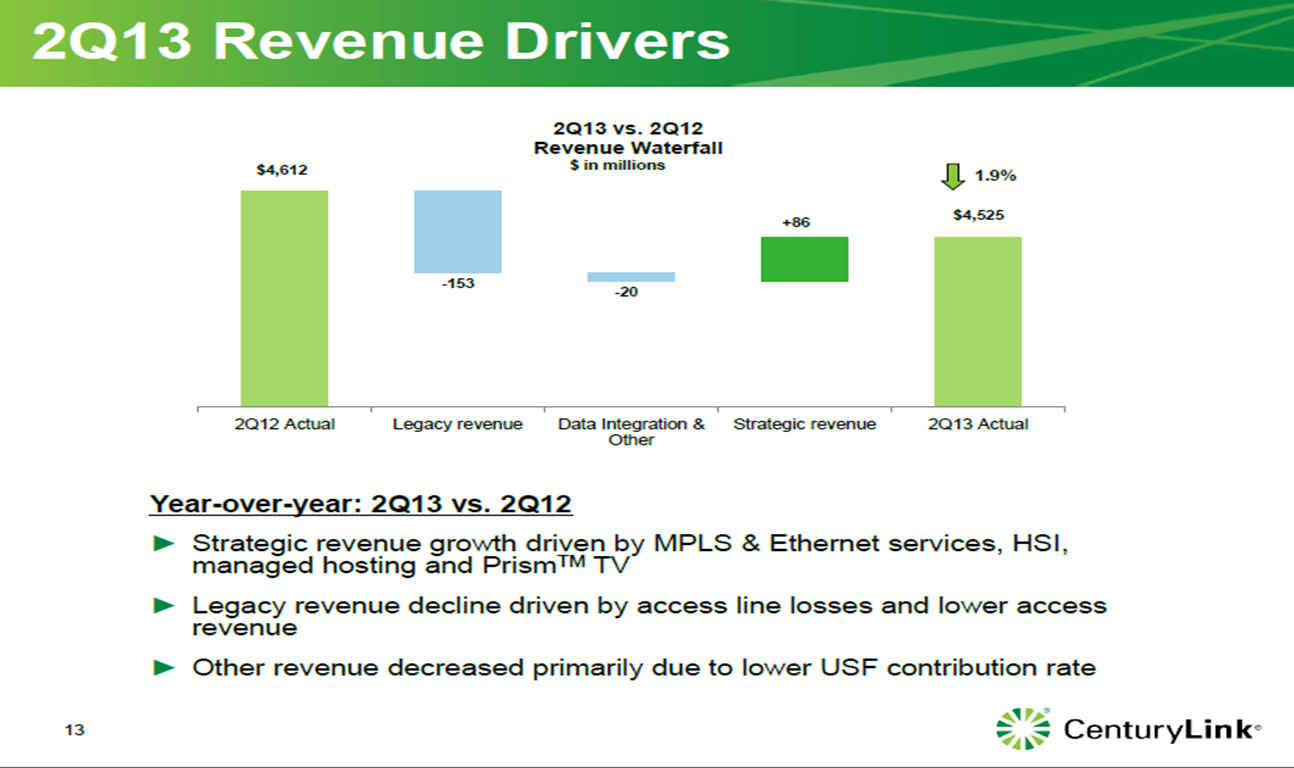 If the future is so bright, then why the 5% dip in CenturyLink share prices since they announced earnings?    The following 2Q 2013 waterfall slide from their 2Q 2013 earnings release tells the story:

As we have discussed in several previous Sunday Briefs, CenturyLink is mired in several transitions:  a) movement from highly-regulated phone revenues and profits to less regulated High Speed Internet and IP TV services; b) movement from traditional SONET/ TDM-based business circuits to Ethernet; and c) movement toward the cloud (which is a positive for High Speed Internet, Enterprise, and Hosting revenues).

The questions posed above are easier to answer for Cox and Comcast because they do not have the legacy SONET and TDM compression that voice faces (the “greenfield effect”).  However, both cable and incumbent voice providers face the issue of wireless substitution (see Time Warner Cable and Cablevision earnings for worrying results on residential digital phone growth), FiOS and U-Verse competition, and video cord cutting.  No wireline/ infrastructure provider is safe from the effects of competition, but exposure is greatest for those who have more voice and less Ethernet in their current revenue streams.

By all indications, this is going to be slow recovery.  Consumer discretionary expenditures are going to be impacted by increased health care and energy expenses, as well as restoration of the payroll tax.  Wage growth remains slow for this stage of an economic upturn.

There are some bright spots, however, with South and West providers recovering much more quickly than their Midwest and Northeast peers.  While that recovery helps to absorb some under-utilized capacity, it will not produce the same building/ capital spending acceleration that we have seen in past recoveries – the telecom assets are already in place.  This is a positive for those providers who waited the recession out and have maintained their plant – first mover advantage is always great for Multi-Dwelling Units and housing developments.

For long-term growth, however, infrastructure spending must rise.  Today, it’s coming from wireless towers throughout metropolitan areas.  Tomorrow, it’s coming from small cell, Ethernet and other data needs within office structures.  The wireline industry must change its services equation faster to incorporate an “end-to-end” view, one that includes efficient and timely content delivery to their customers.  When the integration of content and services has taken place, the wireline community will have its mojo back.

Speaking of mojo, we had a few more referrals last week to receive the Sunday Brief.  Thanks for passing it on.  If you have friends who would like to be added to this email blog, please have them drop a quick note to sundaybrief@gmail.com and we’ll add them to the following week’s issue.  Have a terrific week!