The Unintended Consequences of an Attorneys General Victory

Greetings from Davidson/ Lake Norman/ Charlotte, North Carolina where winter has finally begun its return (picture is from earlier in the week when our dog, Abby, was chasing ~40 ducks into the Lake).  Thanks again for the emails and comments on last week’s column – much appreciated and thought provoking.  This week, we will have some thoughts on the closing arguments made at this week’s AG v. T-Mobile/Sprint/ Softbank/ DT trial but spend most of our time focused on the earnings outlook for the telecommunications sector.  We will conclude with a few TSB follow-ups (although admittedly it reads more like the “Five You May Have Missed” feature of previous Briefs).

For those of you in Charlotte, there are still a few seats left at the table for the inaugural Launch LKN book club.  I’ll be leading the discussion on the first book (Tim Wu’s The Master Switch) – we are reading this book (and other lengthy tomes) across two months and splitting our discussion accordingly.  Sign up here – only a few spots left – thanks to The Hurt Hub at Davidson for providing the facility and Launch LKN for providing the forum.

Separately, I will also be delivering keynote addresses to a couple forums in the next new months.  The first one is the 5th Annual Colorado Wireless Association Education Conference.  If you are living in Colorado and not aware of the session, you should check it out.  It’s a full day of panels, speakers, and networking.  More on the conference here.

Finally, I am pleased to announce that one of the start-ups I am advising (Lucid Drone Technologies) recently won another “Best Charlotte Start-ups” award, this time from CharlotteInno.  Read more on their recognition and the other recipients here.

The Unintended Consequences of an Attorneys General Victory

On Wednesday, Judge Marrero heard closing arguments from the states’ attorney, Glenn Pomerantz, and from the defendants’ attorney, David Gelfand.  Both made strong cases for their clients, and the judge committed to render a verdict “as promptly as possible.”

Based on our readings of the Findings of Fact (summary:  AG Findings of Fact read like a Law School final exam response; Defendants’ Findings of Fact read like a Business School final exam response), this is by no means a slam dunk for either side.  The future of M&A transaction second-guessing hangs in the balance, which could be very important for all industries (airlines, energy, insurance, health care, retail specifically come to mind in addition to telecom/ cable).  If you don’t like the opinion of the Feds, you could shop the decision to a coalition of like-minded AGs and hold up approvals for months or even years.  In a recent article with the Wall Street Journal, Assistant Attorney General Makan Delrahim echoed these points, saying “I think if the states win, it creates major uncertainty in M&A.” 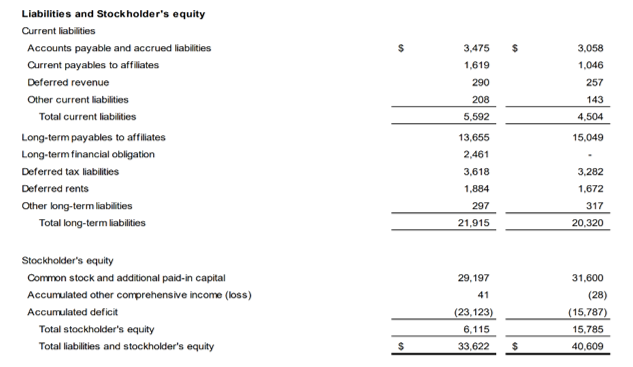 In addition to the practical matter of altering the M&A approval process going forward, there’s the issue of Sprint.  In his closing statement, Mr. Pomerantz stated “Let them compete” and there’s an erroneous assumption that an unmerged Sprint would be in a similar position that T-Mobile faced at the end of 2011 when the AT&T merger failed.  Let’s correct this faulty assumption with some data.  Pictured nearby is the T-Mobile 2011 and 2012 balance sheet from their 2012 news release (the 2011 release was not available).  The right column of figures reflects the balance sheet as of December 31, 2011.  T-Mobile had just over $1 billion in payables to affiliates (Deutsche Telekom) and slightly more than $15 billion in long-term payables to affiliates.  That’s it – $16 billion in debt with one primary debtholder who is also the primary shareholder.  As reference, T-Mobile had $5.3 billion in adjusted OIBDA and $2.3 billion in operating income in 2011, and was in the process of collecting a $3 billion break-up fee plus spectrum from AT&T.

Sprint is in a very different situation today, as shown by the following chart from their Investor Relations website: 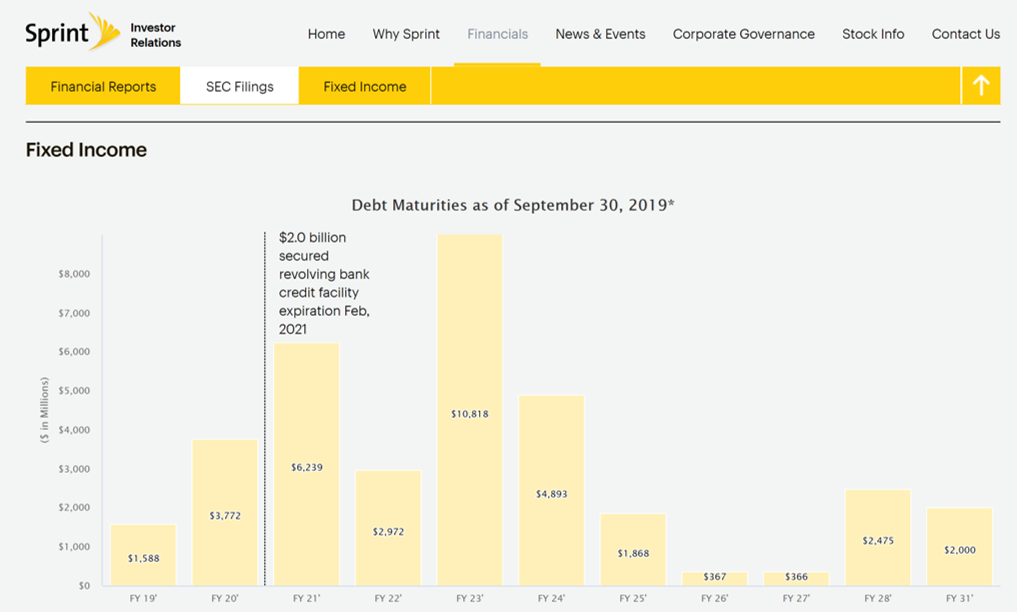 Paired with this debt schedule is the following quarterly reconciliation to free cash flow:

The economic reality for Sprint is as follows:

At current trends, Sprint will need $7.5 billion over the next two years to remain solvent.  Add in additional 5G expansion to remain market competitive (something CEO Michel Combes mentioned in trial testimony), and that figure easily exceeds $12 billion.

Back to T-Mobile for a moment.  Here’s the slide outlining what they were able to do in the 12 months following the AT&T merger dissolution: 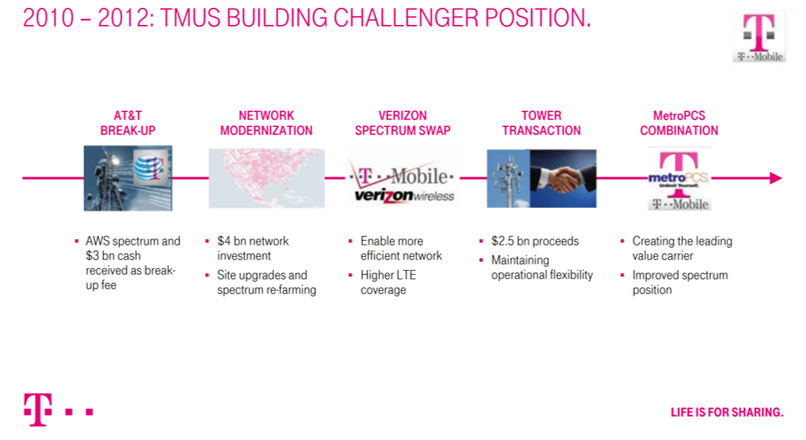 T-Mobile entered 2012 with mostly mid-band spectrum (1900 MHz).  They picked up AWS spectrum from AT&T as a result of the merger failure (1700 MHz/ 2100 MHz) and added additional spectrum through their Metro PCS acquisition.  Then they swapped some additional AWS spectrum with Verizon (announcement here).  Then they bought $2.4 billion in  700 MHz spectrum (called the A Block) from Verizon in 2014 (article here) and additional spectrum from other carriers in 2016 (article here).   Then they bought $8 billion of 600 MHz and additional $1.8 billion in AWS-3 spectrum.  Bottom line:  T-Mobile scrambled to fill in low-band spectrum gaps to more effectively compete with AT&T and Verizon.  This type of spectrum is not available to Sprint today, hindering their ability to be competitive in suburban and rural locations.

To use a card analogy, Sprint needs the face cards of low-band spectrum, a long-term oriented bondholder ready to finance $10-15 billion over the short-term (the approval process to engage another major shareholder is uncertain thanks to the recent AG action), and a solution to provide another $20 billion in debt restructuring for those redemptions due in 2021-2023.  T-Mobile, Verizon, and AT&T are holding those spectrum face cards and don’t plan to sell them to Sprint.  An investment from Google or Apple (both very unlikely) would draw extensive scrutiny from the same AGs who objected to the T-Mobile purchase.  And another foreign investor, even from Canada or Mexico, would be difficult (but not impossible), if they could afford it.

“Let them compete” under these conditions has clearly defined but unintended consequences:  Sprint either a) declares bankruptcy, sending shares to pennies and wiping out Softbank’s investment (and the Japanese banks that helped finance them), and then sells to a cable company (or consortium) if the DOJ, FCC and state AGs allow it; or b) as was stated in the trial, Sprint ceases to be a national provider, which might preserve competition in New York City but will drive up prices in Binghamton, Syracuse, Schenectady, Henrietta, North Chili and Medina.  Hopefully the pithy “Let them compete” soundbite is ignored by Judge Marrero and math prevails – that’s why this case is still a coin flip.

In last week’s TSB, we started to outline the key themes we expected to hear during earnings calls.  As a reminder, the earnings season starts next week with Comcast (Thursday, January 23, 8:30 a.m. ET).  The remaining calendar (as of Jan 19) is as follows (Neither Sprint nor T-Mobile have indicated times, but, if last year’s schedule is any indication, it’ll be either January 30, January 31, or the week of Feb 3.  No info on Windstream):

Here’s five general questions and five specific-company questions we think should be asked:

Our take is that a strong economy drives device and bandwidth upgrades, but only to a point.  Bad debt is going to stay low in 2020 (not only due to economic conditions, but also because of increased relative importance), and all attention is going to be on the wireless and wired broadband tonnage impact of increased content launches as Quibi, Comcast/ NBC/ Peacock, Apple, HBO and others all bring new services to or expand current services in the market. 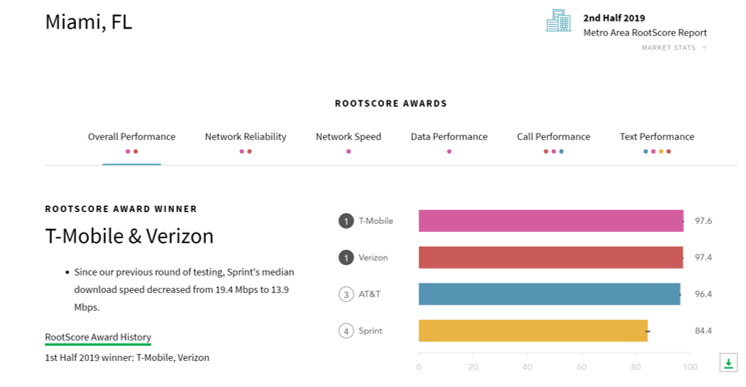 It’s amazing to think that in the first half of 2018, the spread between Verizon (sole winner in Miami) and Sprint was slightly more than 4 points, at the end of 2017 was 3.7 points, and at the beginning of 2017 was 2.0 points).  Regardless of the specific weighting or other quibbling about how RootMetrics conducts their surveys, this is an undoubtedly troubling trend, and it’s not confined to South Florida.  Orlando (1.5 pt spread in 1H 2017 has grown to 9.3 pts in 2H 2019), Tampa (2.9 pt spread to 10.1), and Jacksonville (4.6 pt spread to 8.4) have all deteriorated.

Perhaps this is all prepping for the T-Mobile merger, and there’s a plan in place to turn all of Florida into a 5G heaven, but their recent performance signals that they are falling behind – fast.

There are many more questions, but time and space force them to next week’s column.  We welcome your thoughts and feedback on which questions you would pose.

Here’s a few of the many follow-ups that we thought would make for additional interesting reading:

That’s it for this week.  Next week, we’ll comb through Comcast’s release and hit on a few other topics that were raised from our CES article.  Until then, if you have friends who would like to be on the email distribution, please have them send an email to sundaybrief@gmail.com and we will include them on the list.

Have a great week – and GO CHIEFS!