Summer Texas tax-free weekend greetings from triple-digit Austin, San Antonio and Dallas.  While the lead picture has very little to do with telecom, it’s an indicator of what one might see on any summer weekend in the Lone Star State.  Yes, that’s Chester the Cheetah strutting his stuff with the local mariachi band at the Midway Road Walmart grand opening.  While it made it difficult to pick up any dairy product, the patrons did not seem to care one bit.

This week, we’ll assess the future of broadband and discuss the crippled state of most of the incumbent telcos as they face the dividend music.  Prior to that, we’ll briefly discuss Sprint’s earnings.

I rarely miss on research items (as opposed to opinions and prognostications), but last week I was quickly reminded by T-Mobie employees that I had made a mistake when I stated that T-Mobile faced a reset headwind on their 10 GB (four lines) for $100 offer.  In mid-March, T-Mobile extended that promotion for current customers indefinitely (more here).  The rest of the issues described in last week’s Sunday Brief still hold.  Thanks for the instant feedback, and apologies for the error.

I actually had several requests asking what I meant by my statement about T-Mobile’s driving force (that the benefits of a data first strategy drive the company as opposed to “fixing” downline proceses such as calls to care and churn).  I don’t know how to say this more clearly, but when you start by removing the pain points from the customer experience (elimination of contracts, bill shocks, slow networks, etc.) and you replace that with features that the customer values (larger data allotments, promotional rates for life, Pandora/ Spotify/ Apple Music included for nearly all plans), those customers are going to be loyal.

Stimulating smartphone loyalty is critical to establishing and growing a wireless customer base.  T-Mobile has moved to #3 because it started solving upstream problems.  They are a good case study for the entire industry.

Sprint:  A Better Network For Half of the CapEx

On Tuesday morning, Sprint announced mixed earnings.  Sprint’s Chairman, Masayoshi Son, tried to reassure investors on the conference call that his plan was lock tight with the following assessment of the US wireless industry (this quote is from Seeking Alpha and verified from the audio transcript on Sprint’s Investor Relations website): 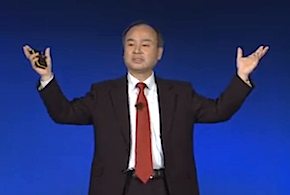 So I would say the network that we created in Japan is much, much more superior. That’s a fact: coverage, the speed and all the integration. However, within Japan, SoftBank spent almost half in CapEx compared to our competitor, but the result of our network coverage, the speed is number one. So what we’re good at is spending less in CapEx and create a number one network. Of course, it’s easy to spend money and get the result, but if you have less money and then still want to achieve the number one network, you have to use brain instead of money and muscle.

So we have used brain a lot, and came up with all kinds of unique solutions that other companies do not have. We created by ourselves. So we discussed with Sprint engineers and SoftBank engineers and initially the reaction was the U.S. environment is different. However, after all these studies, most of the key fundamentals are exactly identical.

This is a more powerful statement after a few reads.  The way I interpret this is that SoftBank’s extensive experience with 2.5 GHz (specifically the issues of working with high band spectrum inside of buildings and in hard-to-reach metro locations) can be ported/ leveraged by Sprint to create a better network for a fraction of the cost of their competitors ($15 billion over the next three years).

This was the week where we rounded out telco and cable earnings.  To no one’s surprise, cable is trouncing their competitors and are quickly turning into the favored high speed data provider for both small business and residential markets.  Here are some selected extracts regarding cable versus telco performance (I have excluded AT&T and Verizon from this analysis as much of their market value is dependent on their wireless business):

The news flash from this table is that investors are not picking cable for their high dividend (Comcast and Time Warner Cable are below 2% and Charter does not pay one), but that they have ceased to have confidence in the ability of traditional telephony providers to pay the current dividend rate into perpetuity (which provides the basis for the stock value).  This has caused yield-oriented investors to look elsewhere for dividend stability.

In an effort to  reassure investors that they can sustain the dividend, the incumbents reduce headcount (CenturyLink announced an additional 1,000 employee reduction this week) and cut capital (CenturyLink reduced 2015 capital estimates by $200 million this week).  This results in underinvestment in fiber/ speed upgrades which allows cable to increase their relative market share which impacts profitability expectations.  And the cycle begins again.

This is of course a broad generalization – each company has responded to this cycle in different ways.  But there is a “telco mentality” which permeates CenturyLink, Frontier, and Windstream that is underpinned by several principles:

Like many of you, I started my Sprint career in the Local Telecommunications Division (LTD) Engineering & Operations (E&O) division.  At that time, the LTD still had a Revenues department which was made up of top notch regulatory, finance, and sales professionals.  Relative to their industry peers, this was a fairly progressive bunch.  As 800 services (more access revenues), dial-up (more interconnection expenses), and eventually DSL proliferated, the LTD was there with additional offerings.  As long as access lines and special access services to business customers grew, things were good.

In 2001, things started to change.  Access line growth began to slow, driven by a mild recession and competition from a newfangled device called a cable modem.  From 1998-2000, North American cable modem penetration increased from 550,000 to over five million (more here).  From 2001-2005 that figure grew fo over 17 million.

While access line growth slowed (or was slightly negative – 1 to 3% declines per year was not uncommon), the lines lost took less revenues away from incumbent telcos than traditional primary voice lines.  While any access line represented revenue loss and potential stranded investment, there were not enough points to paint a straight (downward) line.  And, for many incumbents, long distance revenues (a familiar market to many telcos) were masking voice losses.

Then came cable’s triple play, starting with Cablevision Systems in 2004 and Insight Communications in 2005.  Originally offered to counter the increasing threat from satellite, both companies hit access lines hard, with Cablevision scoring more than 200,000 phone line acquisitions in their first six months of service (detailed article here).  As soon as the long distance opportunity began it had vanished (see this vintage 2010 Sunday Brief for a good view of the access line loss AT&T experienced after it purchased Bell South).

The incumbent telecommunications providers were still generating increasing earnings thanks to consolidation synergies, and DSL line growth continued to be reasonably strong through 2006.  Then came the mass deployment of DOCSIS 3.0 and the decision by Comcast and others to “stuff the stocking” – offer more bandwidth for the same price rather than participate in the death spiral of DSL (“for life” offers that would barely accommodate web downloads in 2007, let alone Netflix today).  Cable took the “Faster. Better” approach.

Since the end of 2007, DSL has struggled mightily against cable.  AT&T U-Verse and Verizon FiOS (a.k.a, “fiber for the rich”) became the strategic initiatives, while the rest of the planet was put on autopilot.  In the process, cable’s share of decisions turned from 55-60% to 80-90% over a three year period even with the growth of fiber-based alternatives (chart courtesy of Moffett Nathanson):

The traditional telecommunications providers are in real trouble.  They are underinvesting in their local franchise, and, as a result, could cede market leadership to cable in entire states or regions by 2017 (some metropolitan areas, such as Omaha, ceded voice line leadership years ago).  Cable is increasing commercial and residential bandwidth investment, upgrating to higher speeds and connecting shopping centers across the country.  A broad-based change is needed to the telco infrastructure and a new mentality is needed.  We at the Sunday Brief propose one that looks like this:

The traditional telecommunications providers can restore their luster, but it’s going to involve a change in thinking.  If John Legere can be cloned, there’s a job for him.

Recall a year ago, Marcelo Claure took the helm at Sprint. Next week, we’ll take a look at how he’s doing.  Until then, please invite one of your colleagues to become a regular Sunday Brief reader by having them drop a quick note to sundaybrief@gmail.com. We’ll subscribe them as soon as we can (and they can go to www.sundaybrief.com for the full archive).  Thanks again for your readership, and enjoy the remainder of your summer!