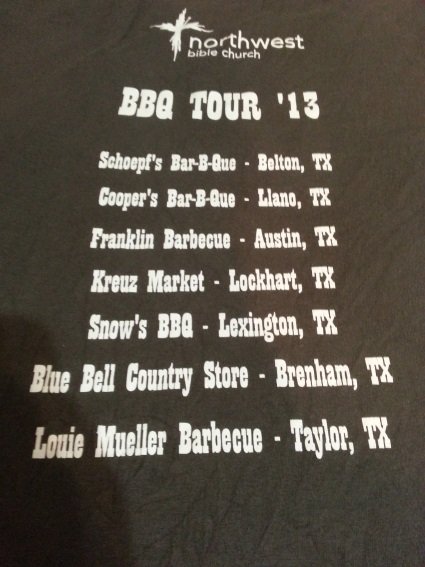 Happy St. Patrick’s Day from Dallas, Las Vegas, and several points in between (the shirt on the left shows this year’s stops on the BBQapalooza my son went on late this week).  As we mentioned in last week’s column, it was good to catch up with many of you at the COMPTEL show last week in Vegas.  The quality of the speakers, from Terry Jones (Travelocity) in his keynote appearance to the joint appearance of Clint Heiden (Sidera) and Scott Widham (Alpheus) at the CEO breakfast was impeccable.  The panel that I led on enterprise application delivery to mobile/ remote devices also went extremely well.  Many thanks to Stefan Bewley (Altman Vilandrie), Bill Weber (Cbeyond), and Randy Jeter (RapidScale) for an active and informative discussion.

Many of you have asked about my reference to a special announcement in last week’s column.  About a month ago, I received a phone call from a Sunday Brief regular who also happens to be the editor of RCR Wireless asking if I would consider hosting a video-based version of the Sunday Brief.  As most of you know, the RCR Wireless folks edit several Sunday Brief columns each year and publish them under their Reality Check series.  In fact, there are many vintage columns posted here.

The Sunday Brief is going to take the plunge into multimedia starting in May for a 12-week summer pilot.  The format will be pretty simple – wireless.  I have full editorial control as long as the topic relates to wireless.  We’ll probably start with a brief discussion of the previous week’s column, and then highlight one or more companies that are impacting the wireless space.  Participants need to have a video camera on their laptop or some other means of transmission.  No trick questions, and no crazy Howard Stern stuff.  If you have a company or division you think should be featured, you know where to reach me.  There are only eleven opportunities so get your nominations in – quickly!

We already have our first featured company (a start-up that I have been working with for much of this past year), but I am looking for more.  Specifically, divisions of larger companies that rarely see the light of day and want a thoughtful and friendly interview.

a) the results of the

RootMetrics studyOne more note:  We are foregoing the “Week in Review” section in this week’s Sunday Brief, but I have posted three articles that might be of interest to the website: on 3G, 4G, and 4G LTE coverage that was posted earlier in the week (which have strong tie-ins to last week’s column);

b) a retrospective on Samsung smartphones through the years as told by Ars Technica (although they are missing a few devices like the Instinct); and

c) an analysis of Phil Schiller’s pre-announcement comments on Android’s fragmentation deficiencies.  Check out www.mysundaybrief.com and have a look.  Yes, we are still prettying up the site, and ideas on how to improve its look and feel (particularly over mobile devices) are welcome.

Last week, we discussed Verizon’s transition advantage – how they are speeding up the network with AWS deployments, and the nearing probability that they will be the first to move to LTE-only devices.  As a review, we talked about three broad themes in the telecom and technology world in 2013:

1)      Transition/ Migration as a competitive advantage

Creating shareholder value can come through many sources – a continuous string of internally developed and innovative products, an exclusive partnership or distribution agreement that creates market share leadership, operational excellence and focus that result in superior profit margins or asset utilization.

Every once in a while, a company emerges that can create value through inorganic growth (e.g., through mergers and acquisitions).  Those companies always build upon one of the foundations described above (usually operational excellence) to create an integration discipline or methodology.

There is a large body of work showing that the most successful inorganic growth companies are those that organize around a small but critical set of principles to guide large and small decisions.  They are likely time-based and customer-focused.  They form the mantra for a small but experienced integration team.  The “rinse and repeat” formula employed by SBC when they bought Pacific Bell, Ameritech, Southern New England Telephone, AT&T (Long Lines), Bell South, and then Cingular is a prime example of this discipline.  When you look at the current AT&T management team, you’ll see men and women who lived through the pains of integration over that decade of change.

This focused discipline allows the best companies to be able to grow through M&A.  It is not for the weak of heart, and there are only a few examples of success in telecom. 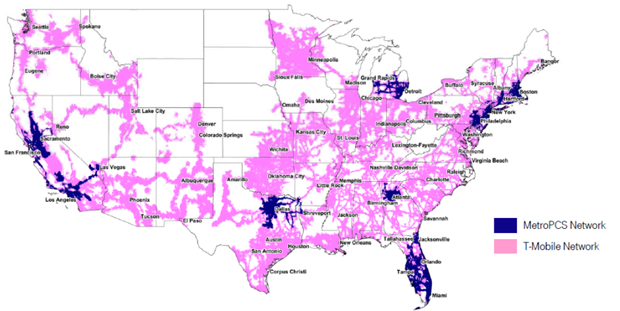 Right now, we are in the midst of several mergers and acquisitions.  Here are few that have been announced over the past six months:

Each of these acquisitions has created expectations.  “Because of this transaction, our company will be able to deliver a) growth of $X; b) profit margins of $Y; and c) free cash flow of $Z.”  For example, here are the promises made to the MetroPCS and Deutsche Telecom shareholders in their merger announcement:

The full T-Mobile/ Metro PCS presentation can be found here under the “Events and Presentations” section.

To maximize the effectiveness of any telecom merger or acquisition, three things are needed:

1.  Deep knowledge of how to best integrate the assets is required.  For example, MetroPCS has LTE deployed across (nearly all of) their footprint.  T-Mobile wants to take advantage of this deployed network as quickly as possible.  A plan needs to be (and I am confident has been) devised allowing new handsets to quickly access MetroPCS’ spectrum and improve the customer experience.  (It’s a lot harder to do the inverse as current MetroPCS devices do not have GSM/ HSPA+ radios.  The immediate roaming savings for MetroPCS cannot happen until the handset changes).  Provided that the integration is not too difficult (e.g., Qualcomm Q-Chat which was going to make the Sprint Nextel merger easy), this involves smart engineers and systems planners, lots of whiteboards, and good debates.

2.  A well-constructed, thorough, interconnected, and acknowledged “Day 1-90” plan.  Those of you who have been involved with mergers know that the words “Day One” have a lot more to do with the completion of requisite regulatory and shareholder approvals.  They are about a new customer experience (pricing plans, branding, compensation, etc.).  But they are also about a new organization, kind of like your first day at middle school.  “New turf, new plays, new season” is how one of you described it to me this week.  The degree to which the plays (and players) change drives the importance of the Day One plan.

In the case of T-Mobile, the change is substantial – to continue the football example, there’s an entirely new defensive line.  In the case of Sprint and Softbank (or Sprint and Clearwire for that matter), it’s a new Owner/ General Manager but the coaches and players are staying around for another season or two (or more).

In the case of Charter/ Bresnan, the change is fairly minor. New talent, but generally it’s a case of some new plays (brought over from Charter’s new coach, Tom Rutledge, who just happens to have been the offensive coordinator at Cablevision, the selling company).

The most critical elements of the Day 1-90 plan are coordination, communication, execution, and customer acknowledgement.  This involves more than sending out an email to each employee with a new organization chart.  It involves a rallying cry (see  Braveheart clip here), a purpose, and a plan.  Align the message to the magnitude of the change, but practice your plan to avoid opening day jitters.

3.  Thinking Forward.  Delivering on items #1 and #2 above requires a solid and thorough understanding of today’s systems, architecture, organization, and culture.  Today might even extend into 2014 due to plans that are already in place.  But how many times have organizations failed to capture opportunities beyond the short-term synergies?  “I’m not paid a bonus to think about that” was what one Nextel executive told me when I brought up the idea of embedding Sprint Nextel “futurists” into each operational review.  Too many times, the merging organizations solely focus on today, and fail to think forward.  They effectively answer the “How do I meet my synergy goal?” but fail to answer “How do I beat _________?” This robs the combined organization of its full potential, and shortchanges shareholders in the process.

We will hear a lot of talk in a month or so on telecom earnings calls about the best laid plans.  But, as the great poet Robert Burns put it:

“The best laid schemes of mice and men
Go often awry,
And leave us nothing but grief and pain,
For promised joy!”

It is not enough to achieve a number – the resulting product/ organization/ network must be able to triumph.  In the world of mobile device saturation (at least for higher revenue-producing products), that entails competitive differentiation.  The forward thinking companies should not be hard to identify – they are the ones who strike fear, not smirks from their larger competitors because they are battle ready.  They are the ones who rise to win the greater war, not merely tomorrow’s battle.

If you have friends who would like to be added to this email blog, please have them drop a quick note to sundaybrief@gmail.com and we’ll add them to the following week’s issue.  Have a terrific week!