Greetings from Dallas and Atlanta.  Tragedy and horror exploded on both sides this week in Boston and West, Texas. Our prayers are for the many suffering, rescuing and recovering. These events remind us how much we appreciate those who run to trouble, protecting those they may not even know.

Outside of the tragic news coming out of Boston, it was a fairly eventful week in telecom.  Verizon and America Movil (parent of TracFone) both announced earnings, which we will discuss below.  Google decided to buy the municipal fiber network in Provo, Utah (as opposed to building one from scratch).  (Note: a report out on Friday seems to indicate that they received a bargain basement price for the asset.)  Time Warner Cable announced that they will be adding live, out-of-home streaming of live TV on Apple devices (others already offer some streamed content, but TWC’s deployment looks to be the broadest lineup yet).  And then there is the much anticipated Samsung Galaxy S4 release, with phones starting to ship next week.  In a sign that demand for the new Galaxy will be brisk, Sprint is now sold out of pre-ordered S4s.

Speaking of Sprint, they received an unsolicited bid from DISH this week which generated a few dozen emails, texts, and phone calls asking for my take on the transaction.  At the end of the day, Sprint’s Board (see link to see their current members) has the following to consider:

$0.73/ share results in a ~$2.2 billion cash difference between the two offers (using 3.01 billion outstanding shares).  What is harder to determine is the value of the remaining equity interests – Does the recapitalized Sprint have the opportunity to create more value than DISH shares?

This leads to the following question (and, before you answer this question, please refer to the attachment):  “How broad and deep does Sprint’s data (LTE) network need to be to compete effectively against AT&T and Verizon Wireless?”  We have raised this question in several Sunday Briefs, citing the fact that Sprint is heavily dependent on third party networks (namely Alltel, which is now owned by Verizon Wireless) for voice and 3G data coverage.  Until their announcement this week with C-Spire, a regional provider focused on Mississippi, Memphis, Mobile and the Florida panhandle, Sprint had not reached an LTE roaming agreement with any other provider.

The attachment shows the current data coverage state of three networks (as of April 20).  At the top is Verizon’s LTE and 3G network for the Southeastern US.  They have committed to take lighter shades of red to dark red in the next 90 days.  Even if they miss that by a quarter, they remain the clear leader (Verizon’s LTE network covers 287 million pops in the US today, and they have ~15 million remaining to fully cover their 3G CDMA footprint).

As we have discussed previously, an LTE-focused network means more efficiency:  Lower costs per GB, the opportunity broadly to implement Voice over LTE (VoLTE) without a lot of handoffs, and lower handset subsidies resulting from single-mode chipsets are three of the myriad of benefits a new and faster network brings.

The second network (lower right) is AT&T’s, with the current (HSPA) data network covering just over 290 million pops (LTE to be deployed by the end of 2014).  Project VIP, as we have discussed several times, is the most ambitious network enhancement that suburban/ ex-urban/ rural America has seen in the past 50 years.  Particularly in the Southeast (BellSouth territory), AT&T will focus on deep coverage from fixed wireless data and DSL improvements. 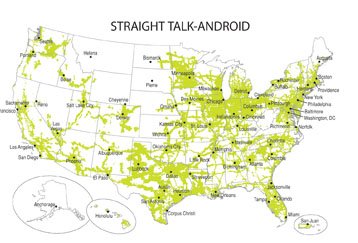 .  See Straight Talk’s map on right for a nationwide view).  There is a lot of white (and not a lot of orange) in Sprint’s map, highlighting the continued dependence by Sprint on ALLTEL/ Verizon for roaming throughout the Southeast (the situation is more bleak in the Western US as the Straight Talk chart shows).

Without self-sourced LTE coverage, Sprint will need to deploy and extensively use other carriers’ networks (namely Verizon and AT&T).  Even if LTE capacity is available, those GB of data will not be cheap.

A recapitalized Sprint (courtesy of Softbank), however, will have a balance sheet that can combat this issue (an extra $10-15 billion in network build will help both in-building and regional coverage).  It is hard to determine how DISH will a) cross market to customers in the white area (where DISH has a distribution advantage over cable for video) and b) raise money as a highly levered company to expand the orange service area in the attached charts.  It is not clear from their conference call that DISH’s management has performed a granular assessment.

If Sprint’s network looked like VZ or AT&T, DISH’s offer would be extremely compelling, but can DISH pull off a network expansion to achieve the cross-marketing synergies it promises in their proposal?  It’s unlikely given the $11 billion of expense and $2 billion of capital synergies they have included in their estimates.  (The full DISH presentation on the Sprint acquisition is here.  Synergy slide is page 4).

There will be plenty more to discuss on the Sprint/ DISH offer in coming weeks. While Sprint’s Board has a lot to consider, it’s fairly apparent that DISH is not going away.  Engagement will be critical – there’s a sequence here that can create competitive differentiation for Softbank, Sprint, and DISH (and perhaps T-Mobile).

After analyzing this week’s earnings announcements from Verizon and America Movil, plus the positive surprise from T-Mobile, I noticed a gap that does not seem to have been picked up by the telecom community.  The news from this week signals a 300-600K postpaid subscriber surprise by either AT&T or Sprint.

Here are the facts as we know them today:

At a minimum, #1 and #2 above mean at least 478K subscriber losses need to be absorbed by AT&T and Sprint (or the postpaid market miraculously grew in what is historically the weakest quarter of the year).  However, given the size of iPhone’s addition through StraightTalk, one has to believe that the net effect is actually higher.  As the chart below shows, there are only two places this postpaid growth can come from – AT&T and Sprint.

Let’s assume that AT&T has 200K postpaid additions for 1Q.  That would imply a 400K loss by Sprint just to keep the total postpaid net additions growth on par with 2011’s Q1 level (again, none of this includes the portion of StraightTalk/ TracFone growth that came from postpaid customers).  Sprint’s loss would be closer to 700K to match 1Q 2012’s level.

While many analysts are expecting an increase in net losses for Sprint due to lower iDEN recapture rates, the news thus far this month (T-Mobile stems sub losses, VZW increases postpaid gains, and TracFone launches their iPhone offering and adds over 1 million net new subscribers through VZW) cannot be good.  Either Sprint had modest losses (and AT&T breaks even on postpaid subscribers) or Sprint’s losses were steep.

Clearly, there will be no positive surprises next week.  After AT&T announces earnings Tuesday afternoon, we’ll have a pretty good idea what Sprint’s number will be.  We’ll also know the extent of subscriber movement across the industry.  Stay tuned for a full roundup next Sunday and throughout the week at www.sundaybrief.com.