The Sunday Brief:  What Isn’t Being Discussed On 2Q Earnings Conference Calls (Part 1)

August greetings from chilly Fraser, Colorado where there’s still snow at 11,200 feet in early August!  This is a panoramic shot from a short but steep trail near the Berthoud Pass near Winter Park, Colorado.  A fun time with family and it wasn’t Dallas hot.

My apologies for the production miss on last week’s Sunday Brief.  The travel schedule for the past two weeks was brutal (Austin, France, Atlanta, Denver) and we ended last Sunday with only a partial report.  It’s the first time in nearly five years that we have had a publication miss, and it makes writing this week’s brief even harder.  Thanks to the 60+ of you who emailed, texted, and called looking for your weekly fix.  We simply ran out of time.

Many if not most of you have seen earnings for AT&T, Verizon, Comcast, TWC, Sprint, and T-Mobile over the past two weeks.  While many of the headlines focused on what was discussed on conference calls, this week’s Brief will focus on what wasn’t said.  Many times, omissions can ferret out poor or struggling investments.  They nearly always highlight portions of the business where competitiveness is waning.

Headline #1:  Sprint Loses the Prepaid Pole Position to T-Mobile.  Is Postpaid Next?

We have discussed this narrowing gap in previous Sunday Briefs (see here for the most recent analysis) and in 2Q 2014, T-Mobile passed Sprint as the market leader in branded prepaid subscribers (T-Mobile passed Sprint in total prepaid revenues in late 2013 due to an $8-9 ARPU advantage).  Sprint’s retail prepaid customer base is now at 4Q 2011 levels. 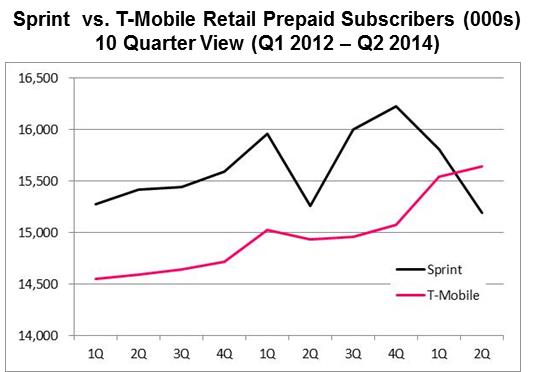 Just as recently as 4Q 2013, the prepaid gap with T-Mobile was over one million subscribers.  Sprint experienced losses in the recertification of government-subsidized services (called Assurance Wireless).  T-Mobile also cited some pressure in growing pre-paid branded subscribers because many of them were qualifying for (and electing to move to) T-Mobile’s postpaid services.

The prepaid leadership change is significant because retail prepaid performance influences third-party dealer attention and focus.  They smell success and want to play on the winning wireless team.  With T-Mobile and Sprint neck-and neck on LTE coverage (T-Mobile at 233 million POPs, Sprint at 254 million), it comes down to pricing, handsets, promotions – and momentum.

T-Mobile may also have an advantage as a GSM carrier.  Given turnover in T-Mobile and AT&T upgraded units, there could be more SIM-capable supplies of Apple iPhone 5, 5c, and 5s models available in the second half of 2014 (new iPhone, new network compatibilities).  Configuring a previously owned Verizon iPhone for Sprint’s LTE network is more difficult than a SIM card swap.

Sprint is certainly doing everything they can to regain their leadership position in retail prepaid, including this week’s announcement of Virgin Mobile Custom, a new product to be distributed through Walmart (and not through Virgin Mobile USA).  More details will be available on this voice and text-centric plan prior to its launch next Saturday (August 9).  Sprint also recently announced some important changes with their Boost pricing (including an entry point of unlimited voice/ text + 500MB of data for $40) which they indicated helped 2Q subscriber growth.

T-Mobile is also closing the postpaid subscriber gap as the table below shows (note – table is in 000s):

If the current trajectories hold, Sprint will lose its postpaid advantage by the end of 2015.  What is truly amazing is that T-Mobile has erased 4.1 million of the subscriber gap in the past four quarters primarily through smartphone net additions (as opposed to tablets).  This is definitely the harder path.  As a result, T-Mobile lags Sprint by about $320 million in quarterly EBITDA.  However, if T-Mobile’s monthly postpaid churn remains at 1.5% (and Sprint’s fails to fall to 1.8-1.9% in the second half of 2014), the EBITDA gap may be quickly a thing of the past.

Losing their prepaid leadership position is the last thing Sprint needs as it faces continued resistance to a combination with T-Mobile (and now a competing bid as described here by the WSJ).  With Sprint Vision moving from deployment to augment/ optimization, the opportunity is ripe to restore their prepaid legacy.

Headline #2:  AT&T Is Not Gaining on Cable in Broadband – Yet.

This headline was perhaps the most surprising to me, as AT&T has made a big deal about their U-Verse Internet growth (1.5 million subscribers over the past eight quarters).  Comparing AT&T to Comcast (we have discussed in two similar Sunday Briefs that this is a fair comparison), however, shows that AT&T is merely treading water as Comcast solidifies their High Speed Internet incumbency:

As the chart shows, AT&T’s overall consumer broadband connections (U-Verse + DSL) have been relatively flat for the past ten quarters.  U-Verse growth of anywhere from 150-250K per quarter has been roughly offset by an equal loss in consumer DSL connections.  Meanwhile, cable continues to grow in more of a seasonal pattern than U-Verse, with second quarter net additions for Comcast of 156K, 187K, and 203K in 2012, 2013, and 2014.  Like U-Verse, Comcast also tends to see faster growth in the second half of each year and we continue to have a growing economy in many Comcast locations (Atlanta, Houston, San Francisco, Seattle, and South Florida are growing very rapidly).  Comcast’s High Speed Internet ARPU experienced 3.1% annual growth in the second quarter, which follows ARPU trends being demonstrated by Verizon’s FiOS product.

U-Verse has come a long way over the past five years.  It seemed to be turning the corner at the end of 2013, but the first half of this year has not met expectations.  While 1.5 million U-Verse growth is good, Comcast has grown roughly 50% more (2.25 million over the same period).  Given the level of upgrades that have been completed as a part of project VIP (about $5-7 billion of incremental investment), the second half will be critical to the future of U-Verse.  The bandwidth freed up with a DirecTV merger would also be welcomed.

This is not a verdict on telco fiber as a product.  No one doubts Verizon’s (FiOS) ability to attract customers, and, while video profitability continues to be challenging, few doubt the ability of FiOS to generate incremental cash flow for years to come (overall penetration should top 45% in 2015).  However, the lack of growth in U-Verse compared to its cable counterparts is noticeable.  AT&T’s relative disadvantage versus cable is growing despite billions of dollars of additional investment.  Something’s gotta give.

When I ran sales for the Wholesale division of Sprint’s ILEC (now a part of CenturyLink), we watched transport yields and terms with great diligence.  As mobile data boomed from 2007-2012, so did the quantity of access and transport circuits to wireless cell towers.  Many of these circuits were purchased on long-term agreements (five years or more).  They are now up for renewal, and incumbent carriers face a threat from both cable providers (Brighthouse, Cablevision, Cox, Charter, Comcast, and Time Warner Cable) and independent access providers (Zayo, Fiberlight, FPL Networks, Fibertech, Towercloud, Lightower, and many others).

While cell site and building access is capital intensive, the resulting EBITDA margins tend to be very healthy, especially in the last years of a contract.  If the renewal process is orderly, no one notices, but, if it isn’t, the consequences can be significant.

The best proxy for what is occurring in the access and transport world can be seen in AT&T’s earnings where they show revenues from this product.  Here’s the twelve quarter trend:

Billion dollar revenue declines happen in telecom (look at the “mass markets” line for Verizon), but it’s rare that a) they are high margin, and b) that they are not accompanied by a greater revenue increase in another area.  AT&T has a strategic services unit which captures products like Ethernet and VPN (and this category has grown $710 million over the same 12-quarter period), but these are not five year “install it and forget it” long-term deals with other telecom carriers.  Over the past four quarters, the decline in transport has actually been slightly greater then revenue gains in strategic services.  This is one of the drivers behind the Project VIP business connectivity initiative, and the initial results are not encouraging.

Beneath the surface, there are a lot of troubling signs.  Incumbency is less important than it was in the past.  Legacy is more likely a liability than an asset.  The milking schedule for cash cows is now quarters, not years.  Out of these shifts, however, emerges a tremendous period of innovation and value creation for those companies who demonstrate focus and resolve.  We’ll be sure to highlight these companies over the rest of the year.

Next week, we’ll look at Winsdtream’s proposal to split itself into multiple parts and also explore other items from second quarter earnings.  If you have friends who would like to be added to The Sunday Brief, please have them drop a quick note to sundaybrief@gmail.com and we’ll subscribe them as soon as we can (and they can go to www.sundaybrief.com for the full archive).