The Sunday Brief, May 12 2013: Wireline’s Future Through the Lens of Cablevision, CenturyLink’s Earnings 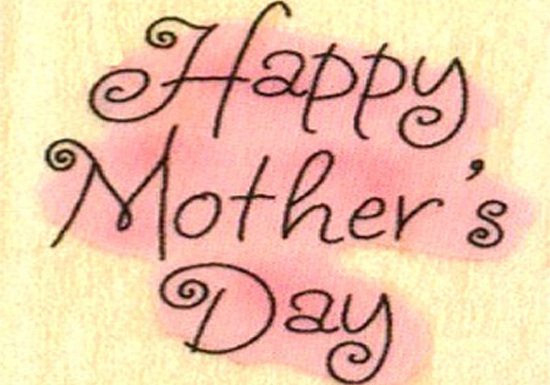 Happy Mother’s Day from Rochester, NY, where the entire Patterson clan has gathered to celebrate graduation and motherhood.  It’s still a “calling event” day in the US, although there will be plenty of Facebook communications and the like (text messaging – not recommended, unless accompanied by a call or visit.  It’s hard to see the “Mom speech” including “But you never text me anymore”).

The earnings parade continued this week, with Charter Communications continuing their string of successes (stock is up over 44% in 2013), Cablevision struggling with the effects of slow subscriber growth and increasing programming costs, and Frontier, CenturyLink and Windstream bringing up the rear as they continue to transform.

One important thing to keep in mind when discussing cable and wired companies is the gradual nature of subscriber change.  Unlike our discussion of 4G LTE penetration and the corresponding growth of data revenues at Verizon or AT&T (20%+ annual growth on a $20 billion base), growth for the wired side of telecom is slower (if not negative).  Here’s the comparison for Cablevision, the most highly penetrated cable company in the US: 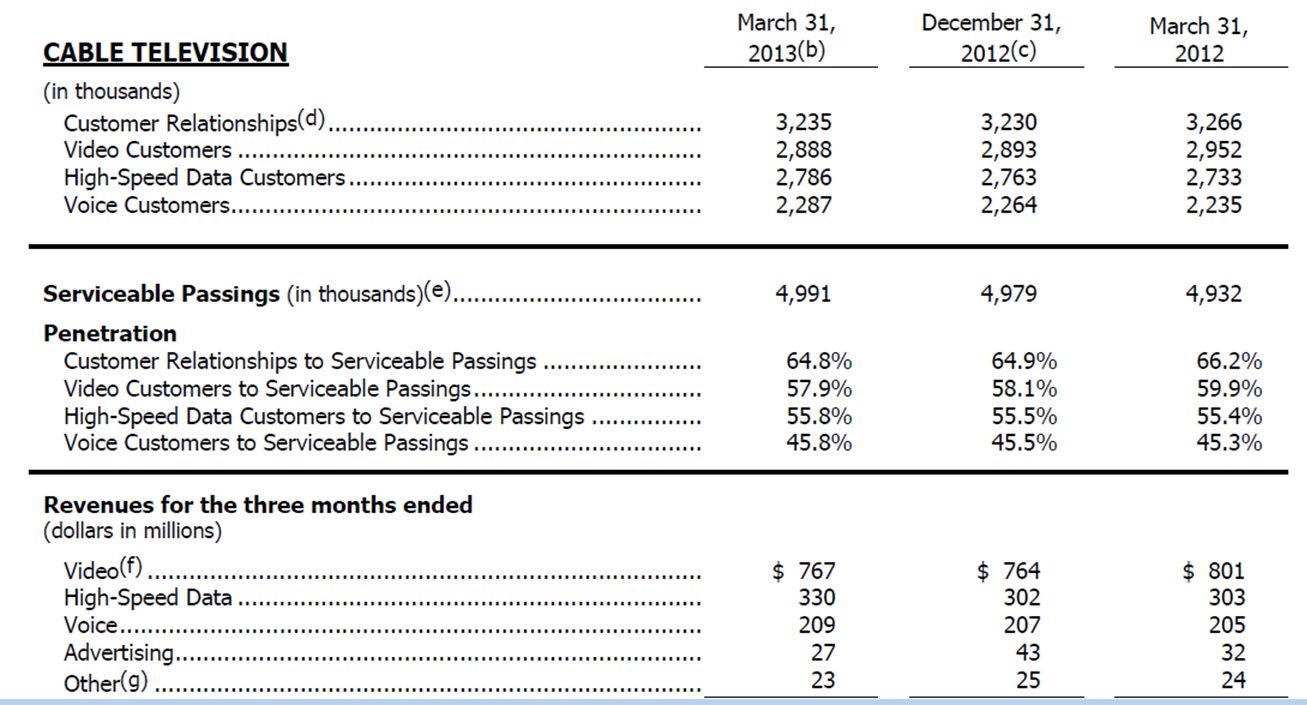 This slower growth is driven by Cablevision’s already sky-high penetration levels – nearly 56% of homes passed take their High Speed Data product compared to 37% at Comcast and 39% at Time Warner Cable.  Voice is equally impressive, with 46% of serviceable homes/ businesses taking Optimum Voice vs. 19% and 18% at Comcast and Time Warner Cable.  While slight, it is interesting to note that Cablevision continues to grow voice penetration while residential voice declined at Time Warner Cable.  Can the buying habits on Long Island be that different from New York City (~33% of Time Warner Cable’s homes passed)?   Or is the bundle not as powerful in more urban areas?  We’ll look at this phenomenon in a future Sunday Brief.

Assuming there’s not much room to grow market share at these levels, how does a company like Cablevision increase profits and cash flow?  If there is enough product differentiation (e.g., sports programming packages, High Speed Internet performance), there’s the opportunity to raise prices.  Cablevision began to do just that with their High Speed Data product (Optimum Online) this year, a $5 monthly increase that represented their first “price up” in a decade.  They also applied a small sports surcharge to their subscriber base.

While top line opportunities will be challenging, there are always ways to take out truck rolls ($70-90 per event) and customer service calls ($4-9 per call depending on its complexity and duration) at Cablevision or any other wired infrastructure company.  It is not surprising to see Cablevision’s CEO, Jim Dolan, focusing his time on improving operating efficiency.

Cablevision represents the “end state” that many cable companies will face once they begin to peak (and, as we showed in the earlier statistics, penetration rates have a way to go in High Speed Internet before Cablevision’s problems become Charter’s or Comcast’s).  As more companies reach these levels, expect consolidation to increase.  Outside of Adelphia, there have not been a lot of changes to the cable industry structure over the past decade. Familial ownership structure (Cablevision = Dolan; Brighthouse = Miron; Cox = Cox; Bresnan = Bresnan) eliminates many of the messy shareholder squabbles over “fair market value.”  It’ll be an interesting dynamic to watch over the next few years, especially if some version of Senator McCain’s television regulations are implemented (for more on the regulations, see this write-up).

If Cablevision is the poster child in “The Quest For Growth” in the cable industry, CenturyLink is their peer in the traditional telco industry.  We wrote extensively on CenturyLink’s bold move in February (dividend cut; aggressive stock buyback; company-wide reorganization), and it’s interesting that they have made up about half of their one-day 23% stock loss this quarter.

CenturyLink, like many traditional telephone providers, faces several threats:  a) Wireless substitution, particularly in the residential segment, is quickly devolving to home security alarm support; b) Cable providers are capturing a significant share of net residential High Speed Internet decisions; c) Cable’s business efforts, particularly in the very small business (< 250 employee) arena are beginning to take hold; and d) traditional carrier infrastructure business, a long-time stronghold of incumbent telephony providers, is being increasingly challenged by competitors such as Zayo, FiberLight, DukeNet, Level3, and the cable providers.  There is no “safe” segment left for CenturyLink that actually makes a decent return.  Core profitability is under attack.  How should CenturyLink fight back? 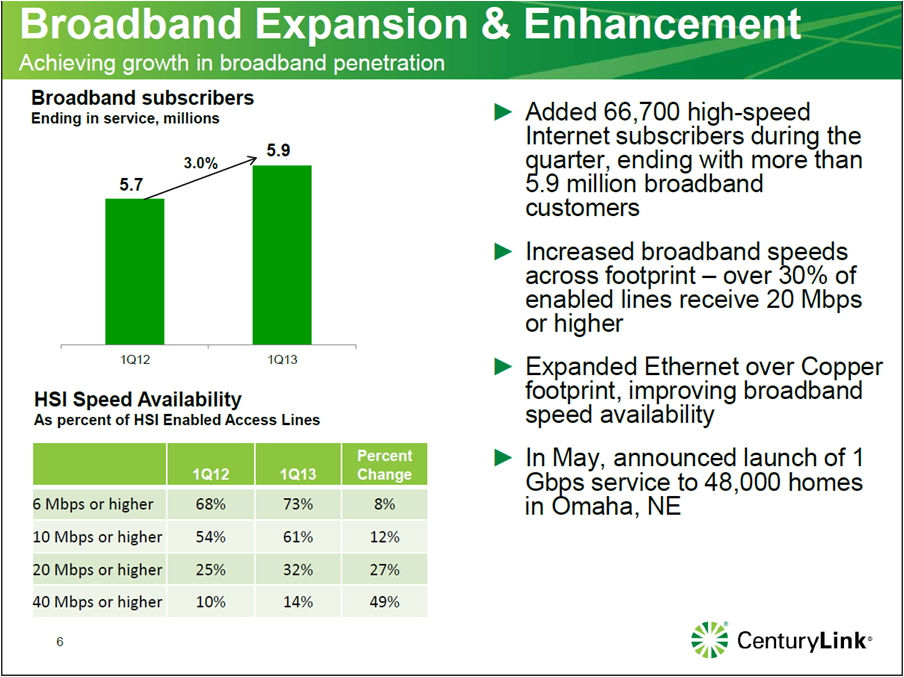 First, CenturyLink has to decide to fight back with a higher percentage of their footprint at higher speeds.  In their earnings presentation, CenturyLink disclosed their progress using the following chart:

They have made good but not great progress in hitting a 10Mbps threshold and are measuring their success against cable’s current standard (DOCSIS 3.0).  This comes as cable’s new standard, DOCSIS 3.1, begins to launch in 2014 with 10Gbps top speeds.  That’s what Cox, Brighthouse, and Comcast will be offering within 36 months in Las Vegas, Phoenix, Denver, Seattle, Minneapolis, Orlando, and Salt Lake City.

Understanding the adoption curve and uses of data (ahead of the DOCSIS 3.1 tsunami) is one of the reasons why CenturyLink elected to retain their license for West Omaha and roll out a 1 Gbps trial to 48,000 homes in that locale.  It’s a bold yet relatively inexpensive move given Qwest’s previous video trials in that region.

All is not dire for CenturyLink, however.  They made a good acquisition with Savvis, a managed hosting and collocation (Gartner) “Magic Quadrant” leader.  Hosting revenues continue to grow at a slow clip, especially when their acquisition of the Ciber IT is included ($15 million of the $24 million in year-over-year growth).  Unlike the rest of CenturyLink’s units, however, Savvis has been a consistent growth engine with strong brand loyalty.  CenturyLink needs to prove that they can efficiently sell the SavvisDirect (small and medium business) offering to the existing CenturyLink base.  In turn, they need to prove that they can withstand the pricing downdraft that is occurring in computing and storage.

CenturyLink also has a tremendous opportunity to globally diversify through the Savvis asset.  As they stated on their call, they will add 90,000 square feet of sellable space in 2013.  They have a Tier 1 backbone through Qwest, and the opportunity to continue to improve their partnerships with a multitude of service and applications providers.  They must act quickly, however, and cannot afford to have slow sales quarters like they experienced in 3Q 2012.

Lastly, CenturyLink needs to build a world-class enterprise experience with their current assets and future partnerships.  This is starting to occur as they are being included on more RFI/RFPs, but there is a point where they need to “break out” and take a calculated risk.  These partnerships fill product gaps (e.g., a hearty Desktop as a Service or DaaS offering for Ethernet customers), as well as geography gaps (e.g., DaaS in Mexico City).  They have a robust data center presence around the globe, and those data centers connect to many local service providers in the cities they serve.  What’s missing is the customer value proposition and a competitive distribution strategy.

CenturyLink and Cablevision’s situations are similar in one important regard:  Doing nothing is not an option.  Even with their respective histories, they are only a few years away from significant hardship.  Both have strong management teams, yet agile is not a word commonly used to describe either company.  This is the plight of wireline today – essential, yet replaceable; committed, yet measured; profitable, yet barely meeting long-term expectations.  Management’s ability to navigate and execute through changing times will clearly separate winners from losers.

Next week, we’ll publish part two of the “No Contract Analysis” we started before first quarter earnings.  Click here for a link to Part 1.  For more detailed analysis and daily updates, bookmark www.sundaybrief.com on your website.