Greetings from Dallas and Las Vegas, home of this year’s Channel Partners Show.  This was a week filled with telecom news and events.  First, the rest of the world discovered what the Sunday Brief faithful already knew – the Broadband Technology Opportunities Program (BTOP) appeared destined for a bumpy landing.  (Hint: if you thought building the network was hard, try marketing and provisioning it in a competitive marketplace with AT&T building out LTE to many BTOP-funded areas).  I am sorry to say this, but the worst is yet to come with the BTOP projects; some of them will be sold for “cents on the dollar” levels not seen since 2002-2003.

Second, we had the Mobile World Congress in Barcelona, Spain.  It was an upbeat occasion, according to eyewitness accounts of the Sunday Brief faithful, with even more powerful smartphones like the Huawei Ascend P2, dubbed the “world’s fastest smartphone” because it is enabled with CAT 4 LTE (which technically can generate speeds of 150 Mbps).  We also had the unveiling of the supercharged LG Optimus G Pro (1.75 MHz quad core Snapdragon processor, 5.5” display, 13MP rear camera (2 MP up front) and 3,140 mAh battery) which will be priced to contend with the Samsung Galaxy Note 2.  A full review as well as a cute dig at the iPhone 5 can be found here.

For more on what was being featured at LTE, read here and here (warning – there’s a lot to see in these two links).  Also, in conjunction with MWC, one of the great post-recession start-up stories, eRecyclingCorps, announced that they had completed 10 million phone trade-ins since 2009, with seven million of these in 2012.

Third, we had Clearwire draw from Sprint’s line of credit.  As we covered in our Sunday Brief on the Clearwire saga (entitled “Clearly an Unclear Outcome”), the odds of a successful Dish bid diminished when the $80 million available each month began to be tapped.  Sprint has the right to convert each tranche of borrowing into common stock valued at $1.50/ share.  More on this saga in an upcoming Sunday Brief.

Fourth, the Federal judge assigned to the Apple v. Samsung case reduced the amount of fees that Samsung owes Apple by 40% or $450 million.  Judge Lucy H. Koh cited a miscalculation of the damages granted for certain utility patents that Samsung violated.  At the same time, however, she ordered a new trial to determine if some of the $450 million would actually need to be paid by Samsung.  More on this tangled web in this account from the New York Times.

This leads us to T-Mobile’s earnings.  On Thursday, T-Mobile USA released their financial results as well as an update on their “Un-Carrier” strategy.  Results were encouraging, although many of the year-over-year comparisons are misleading (it’s hard to remember back to 2011, but T-Mobile was trying to merge with the same company that they are now positioning against – AT&T).

Here’s some overall statistics on T-Mobile: 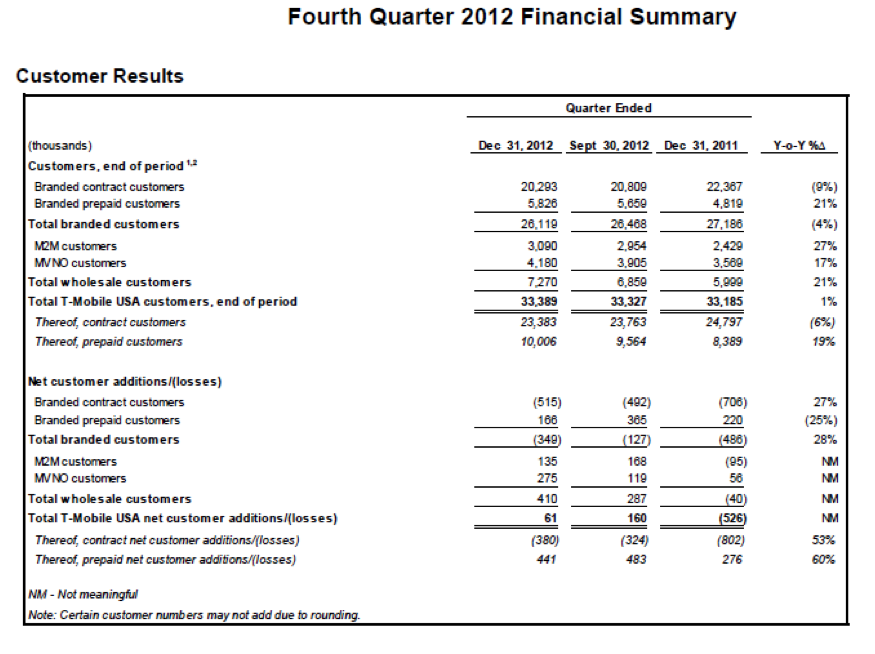 There is a lot going on with T-Mobile’s customer base.  Nearly 30% of the branded contract customers (and 50% of fourth quarter gross additions) are on Value plans, which result in higher ARPU (higher data plan attachment) and also significantly lower subsidies in the quarter in which they are incurred.  The value plan is popular, but not as popular competitors’ iPhone 5 offerings.  As a result, branded contract churn rose to 2.5% from 2.3% in 3Q 2012.

Bottom line:  When the LTE network is ready in each market and on a wider variety of handsets, T-Mobile will have a competitively positioned offer.  How and when they market this difference (e.g., “more applications for less money”) will determine how quickly customers switch.

Seven percent branded prepaid monthly churn.  That’s an eye-popping figure.  As many of you who come from the prepaid wireless (or even stand-alone long distance) industry know, there is a point where customers are mistakenly mislabeled – they should be called “visitors.”  They have reached that point for T-Mobile in the branded prepaid space.  80%+ annualized churn for the last half of 2012 is abysmal, regardless of the reasons T-Mobile cited (older base, higher competition).  This is not only Un-Carrier, this is Un-Sustainable and will soon be Un-Profitable.

Sprint’s overall retail prepaid churn is 3.3% (including Nextel/ Boost) and their overall net additions are similar (800K for Sprint vs. 1 million for T-Mobile in 2012, although Sprint’s platform (non-Nextel) net additions were 2.3 million).  This was the last chance to poach the Sprint base.  Leap is on the ropes with the iPhone albatross hanging on its neck, and MetroPCS lost customers in the quarter.  TracFone is adding customers, but not at 2011’s pace.  This was the time for T-Mobile to make their move – What happened?

The answer to that lies in distribution, specifically with Wal-Mart.  As we discussed in 2010 and 2011 Sunday Briefs, the introduction of Straight Talk branded products was not going to be a short-term initiative.  Wal-Mart was in this for the long haul, and the wireless carriers were going to play by Wal-Mart’s rules.  Given Wal-Mart’s national presence, this seemed to be a natural geographic fit for AT&T (who is now carrying Straight Talk’s iPhone data) and Verizon’s expansive national networks.

In the beginning, Verizon enthusiastically embraced Straight Talk, but in late 2010 and 2011 something changed.  It has not been until the full bloom of LTE that Verizon has been back to the table, this time with greater gusto.  For example, Verizon and Straight Talk are now being favorably mentioned by radio talk show host and super saver Clark Howard (who definitely lacks the physical looks of the T-Mobile spokesperson).  His seal of approval is better than Good Housekeeping’s. 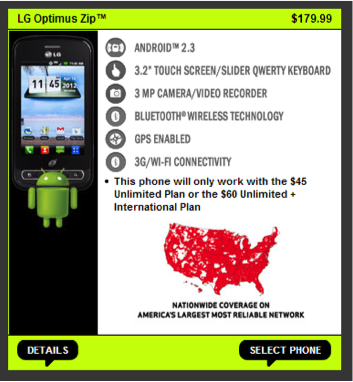 While wholesale subscriber figures are no longer reported by Verizon, they do report “other” revenues (these are wholesale revenues by a different name).  This category grew 16% year-over-year or about $572 million (10% of Verizon’s annual growth came from the “Other” line).

Verizon and Wal-Mart are not subtle when it comes to marketing the base.  Have a look at the phone offering to the left – you don’t need to be a telecom expert to understand that the “red” is the Verizon network.  If you are uncertain, the Wal-Mart in-store associate will not be as subtle.  Verizon’s network brand spend is helping both retail and wholesale distribution.

Verizon is growing their wholesale subscriber base.  They can do this, particularly with 3G data, because they have quickly moved their EVDO traffic over to LTE.  The secular change away from voice (less monthly Minutes of Use) also creates excess voice capacity.  The formula is right for aggressive non-retail offerings.

AT&T has also shown more attention to the wholesale/ reseller base with slightly less than 1.2 million net additions in 2012.  Bottom line:  both AT&T and Verizon are mere quarters away from grabbing a lot more of the Straight Talk base.  As soon as AT&T can make the claim that over half of their data traffic is traversing their LTE network (which IMO will happen in the next 12-15 months), then it’s a free for all at Wal-Mart for the Straight Talk customer base – just the way Bentonville wants it.

There are three ways T-Mobile should respond to this inevitable threat.  First, finish the LTE network as quickly as possible.  It goes without saying, but the sooner T-Mobile can demonstrate network similarities, the better positioned T-Mobile will be for a variety of Wal-Mart relationships.

Third, get creative on applications.  What Metro PCS has done with joyn is pretty incredible.  Make it easy for folks to try apps – an “app of the month” club would be a real hit with gamers and developers alike.  Another angle is to attract more families and their devices by deploying Famigo or a similar application on each new T-Mobile device (which I am aware of through my relationship as an advisor to Famigo).  There is plenty of room to improve the applications experience, and “try then buy” is one way to drive up awareness and adoption of paid apps.

T-Mobile is running out of time to right the ship.  This may not easy to see today, but the level of improvement required in three years is significant.  Orchestration is critical – they need continuously to build on their momentum with a sense of urgency.  Each market needs to deliver once the network has been improved – there is no room for error.  Failure to integrate and synergize the Metro PCS asset and deliver a competitively powerful LTE network will most certainly be T-Mobile’s un-doing.

Next week, we’ll bring all of the earnings reports together and see where first quarter results are headed.  If you have friends who would like to be added to this email blog, please have them drop a quick note to sundaybrief@gmail.com and we’ll add them to the following week’s issue.

We have also made some improvements to the Sunday Brief website over the past few days.  We are still missing a few articles, and they will be loaded in the future.  It’s a work in process, but you can read most articles over a mobile phone or tablet as well as Word.  Welcome any feedback on how to make it better (and yes, several of you have offered to buy Sunday Brief items.  Sorry, too busy with the advisory services to think about that right now).   Have a terrific week!