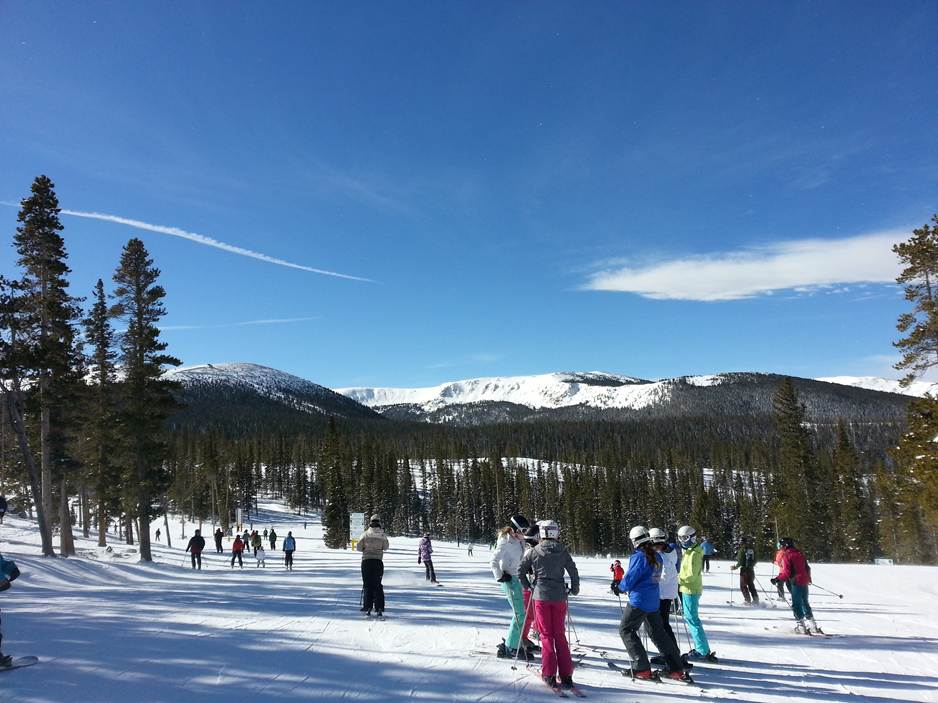 Greetings from Fraser, CO and Dallas.  This has been a week full of announcements, from the introduction of the HTC One (see CNET review here), to the announcement of a strategic product partnership between GENBAND and Samsung (see Fox Business interview here), to AT&T Mobility’s completion of a four-year, 36-state agreement with the CWA,  to Charter’s knock-out earnings, to the “pound of flesh” terms of a $110 million G (not a typo) Round of financing for Living Social.

Many of you are heading over the Barcelona for the annual Mobile World Congress show.  Here’s a preview of the show from IBT, Engadget, Ars Technica and The Guardian.  Speaking of Ars Technica, I have especially enjoyed their latest pieces on the future of mobile computing.  Part 1 is here and Part 2 is here.   I am headed to the Channel Partners show in Las Vegas to help out Rapid Scale, one of the best cloud computing companies for Value Added Resellers and Managed Services Providers.

Finally, we are soft launching the My Sunday Brief website.  Yes, it’s a work in process, but all of the articles since last April (when we re-launched the SB) should be there in both Word and PDF formats by the end of February.  We are adding many features to the site, and now you can direct your friends to the RSS feed and they will be instantly notified when we post something new.   Sorry, no SB t-shirts, briefs, coffee mugs or water bottles, SB blended coffee, Amazon SB subscription, or even SB Pogs yet, but if someone is willing to take on a t-shirt or coffee mug design, I’m all ears.

Many comments came in both from the Comcast piece last week and the Time Warner Cable SB that came out earlier in February.  I am an unapologetic fan of the cable industry.  They took a huge risk when they entered the highly regulated and interconnected world of local telephony.  It was hard, and, because of their relenting focus on voice quality (to be equal to or better than their incumbent competition) and innovative bundling, the cable industry earned a fair share (20-30%) of the home phone market.  They played by the rules, and they are winning because they are more attractive than their competition.  This does not mean that they are communications supermodels – far from it.  But they are prettier than the alternative, at least right now. 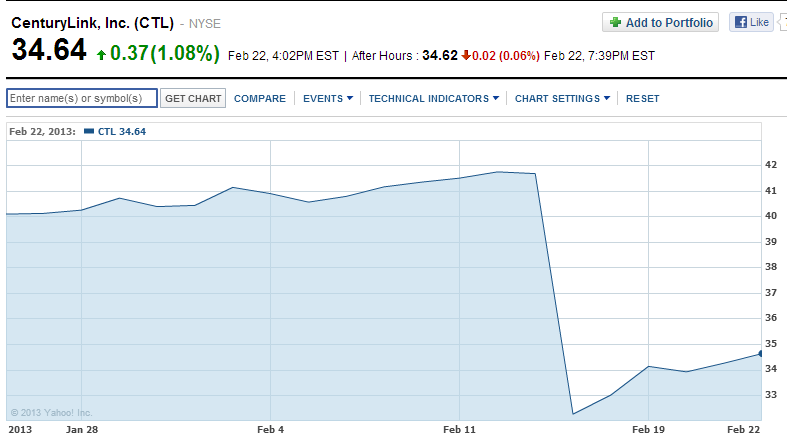 This leads to the discussion of CenturyLink (Ticker: CTL), who resemble their cable brethren more and more as each day passes.  On February 13, CTL announced both a $2 billion (8% of outstanding equity) stock buyback authorization and a 26% dividend cut, which sent their stock down by 23% the next day (the stock has since recovered $2.37 or 25% of the $9.42 loss).

There is more to this announcement than meets the eye, more than the creation of a more tax efficient way to reward their shareholder (assuming the tax rate between long-term capital gains and income tax/ dividend rates continues to remain in effect).  The strategy is best described in the lengthy earnings conference call exchange below between David Barden, Bank of America equity analyst, Stewart Ewing, and Glen Post (source = conference call transcript from CenturyLink’s Investor Relations site):

Hey, guys. Thanks for taking the question. I will go back to the strategy change, I guess. I guess I wanted to give you guys maybe the opportunity.  A lot of the questions have been, okay, so Stewart, if nothing has changed in the business from a year ago and we’re looking at the same free cash flow in 2015 today that we’re looking at before, but what we’ve done is we’ve chosen a strategy now that’s both led to debt downgrades and a 15% cut in the stock price. But the argument is that we’re going create long-term value, but there’s nothing on the acquisition table, there’s nothing on the CapEx investment front that’s going do anything different than what’s been happening. So, what is the bull argument now for CenturyLink now that you have done what you have done? How is CenturyLink better for the stockholders now?

So, David, I think the first is that, basically, we were going to get downgraded anyway, based on the 2013 budgets  and plan, short of cutting operating expenses or investment in areas that we think long-term will help us get to revenue and EBITDA stability. If we hadn’t cut those, we couldn’t have kept the investment grade rating. The other way to keep the investment grade rating would have been to cut the dividend, and use that to pay debt back. W  e were going to get downgraded anyway. It would have been worse, I think, for us to cut the stock price — cut the dividend and basically use that to pay debt back at this point. So, looking at that, I guess, we — as we focused on 2013, we really started focusing on ’15 and working through and trying to look at what taxes, cash taxes, would potentially go in to ’15. And that’s when we realized as part of that, that basically the dividend payout ratio was going to increase significantly in ’15, if we didn’t do something. I guess we could have waited and — 1.5 year or 2 years and see how that worked out, but we decided better to be proactive and really try to bay stock back in the interim and keep investing in the business to try to — nothing has changed in the business, really. Keep investing in the business to stabilize and grow revenue and EBITDA. So it’s just — we felt like we were better off going ahead and reducing the dividend now, buying shares back with it, which reduces the shares outstanding by the time we get to 2015 which helps us really, again, stabilize and be confident that we can continue with the dividend that we’ve moved to. Which is more in line with our historical payout ratio in the last two or three years in ’15 than we would have been, had we not done this at this point.

I will just add, David, that first of all, what’s changed is better visibility, as Stewart said, into 2015. Secondly, more confidence in our growth initiatives. We’re seeing those become real. We could have made the choice to increase the — keep the dividend or increase the dividend and reduce our investment in the business, which we don’t think is right. If we had not done this, we’re looking at 2015, we think we’d see pressure on the stock price as we went into — certainly into ’13 and ’14 as we came close to being a cash taxpayer. So, we think you take all that into consideration, this is the best strategy for our Company long-term and for our shareholders long-term. That’s our view of it. 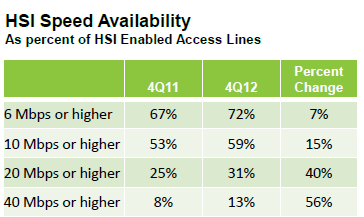 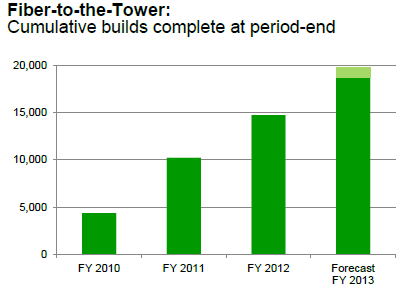 This lengthy exchange spells out in detail what is going on at CenturyLink and at other carriers such as Windstream.  They had a stable yet declining business that consisted of providing traditional telephony services to specific geographic locations:  Orlando, Phoenix, Seattle, Las Vegas, Denver, Minneapolis, and Salt Lake City are some of the larger markets that CenturyLink serves.  Each of these markets faces business services competition from cable companies:  Orlando from Brighthouse, Phoenix and Las Vegas from Cox, and Seattle, Minneapolis, Denver and Salt Lake City from Comcast.  This competition, particularly in high speed data speeds (vs. DSL) is forcing accelerated investment in capital spending for services to consumers, enterprises, and carriers.  (See CTL’s table above for the breakdown of speeds by percentage of High Speed Internet areas served).  They have no choice but to deploy faster, video-focused services to customers if they want to retain their core business.

On top of this, they received Net Operating Loss benefit from the acquisition of Qwest and Savvis.  CTL drew on this balance to keep cash taxes low.  (Note:  Neither Qwest nor Savvis had investment-grade debt ratings prior to their acquisition by CenturyLink.  Embarq had the lowest investment grade available according to Moody’s – Baa3).

What is drawing cash out of the business that warranted this action?  Here’s the 2013 capital spending breakdown by major business segment:

Quite frankly, it’s hard to see which discretionary category could be eliminated.  If CTL were to cut back spending on the cloud or High Speed Internet, their revenue projections would be lower.  If they cut back on FTTT carrier capital commitments, wireless operators would turn to cable companies or independent operators such as Zayo.  There could be a case made for slowing down IPTV, but their recent success (90% attachment rate of High Speed Internet to the TV product) indicates that the platform leverage they receive from the current investment would be substantial (content costs also likely have volume discounts).  There are few places to cut.

Given the history of each of the companies prior to CenturyLink, the real question should be “Why did management not act on the dividend earlier?”  Qwest and Embarq each had “dry years” where they did not pay dividends over the previous decade.  Savvis had no history of paying dividends.  The expectation that CenturyLink would continue the rich dividend policies of the telco past should have been reset when they embarked (pun intended) on a diversification path with Savvis.

Can CTL’s diversification plan work?  It all depends on the US and global economy.  I suspect they have evaluated the credit quality of each of their major customers following a 4Q bankruptcy that impacted results.  Their embrace of IPTV capabilities is inevitable, but they must execute a differentiated plan – one as we described above, that allows PrismTV to be more attractive than Comcast, Cox, or Brighthouse.  That will take some work in the case of Brighthouse and Cox.

Many analysts have focused on the effects of CTL’s action on their current shareholder base, one who seeks dividends first and share price appreciation second.  Those shareholders will be rewarded, but not overnight.  At the end of the day, it comes down to CenturyLink’s transformation to a fiber-based, Ethernet/ packet-based, video-based service provider.  As the operations change, confidence will increase.  It starts with identifiable and acknowledged returns on 2013 capital spending.

More on earnings as T-Mobile and others release their results.  If you have friends who would like to be added to this email blog, please have them drop a quick note to sundaybrief@gmail.com and we’ll add them to the following week’s issue.  Have a terrific week and I hope to see those of you who are Channel Partners this week!