The Sunday Brief: Earnings Drivers for the Second Quarter (Part 3) 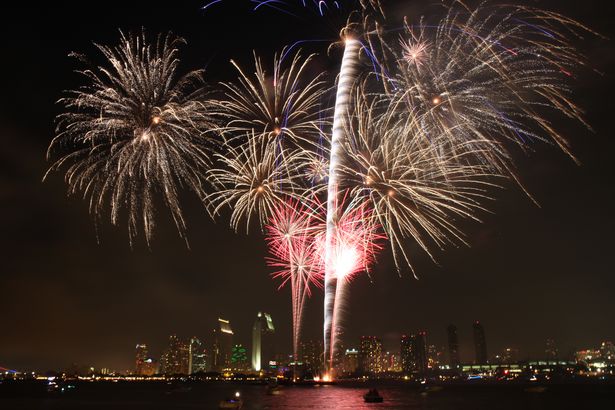 Greetings from San Diego and Dallas.  Hopefully most of you are reading this after your Fourth of July weekend has ended.  This has been a busy week in telecom.  Late Friday, as we predicted, the FCC unanimously approved the Sprint/ Softbank and Sprint/ Clearwire mergers.  This paves the way for the Clearwire shareholder vote on Monday (July 8) and then the synergy expectations game begins.  Exciting changes are afoot, and, as I indicated in my Bloomberg interview last Monday, they must execute with an unprecedented degree of precision.

This equates to a debt-to-EBITDA ratio of ~ 4.7x for the combined Sprint/Clearwire and 0.2x for Verizon Wireless.  Clearly two different ends of the spectrum (pun intended) when we are looking at financial “wiggle room” should synergy expectations be delayed.   The 4.7x is better than it would have been under Dish, and there are few doubts about Sprint’s ability to pay their debts for the next few years, but Verizon’s options are far greater.  It’s why Verizon has returned more equity value to their shareholders in the past six months than the entire market capitalization of Sprint (see chart below).

We’ll talk about Sprint more after their earnings announcement on July 30, but, as I said in the interview, a new captain (Softbank) with discarded (iDEN) ballast and cash availability filling their sails makes the Sprint ship more formidable.  But the straits they must navigate are narrow, and the room for error is slim to none. 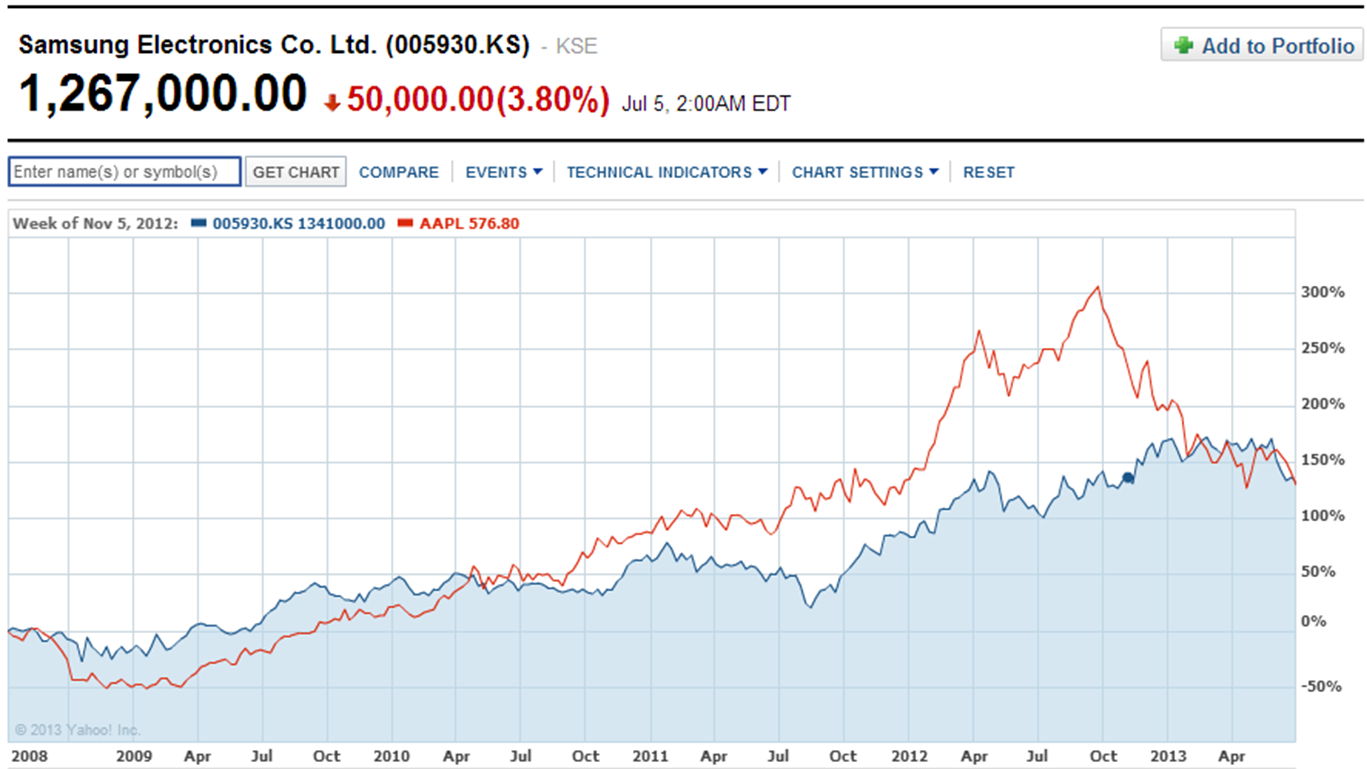 In the “missing expectations is everything” column, Samsung Electronics reset second quarter expectations this week – consolidated revenues would only be 20% higher, and operating profits only 47% higher (to $8.3 billion).  The stock was not bludgeoned as Blackberry was, but it did add to the chorus of ecclesiastical analysts who are convinced that smartphone growth will never return to the good old days of 2011/2012.  Here’s one analysis by The New York Times who almost feels obliged to quote Mark Newman from Sanford C. Bernstein at the end.

The reporting misses two key factors that affected smartphone sales – 1) the Galaxy S4 really did experience supply chain/ inventory shortages with Sprint and T-Mobile at the end of April (and expectations did not adjust); and 2) Verizon and AT&T adjusted their handset upgrade programs from 20 to 24 months, creating potential confusion among the current subscriber base (these changes do not take effect until January and March, 2014, respectively).  As others begin to aggressively adopt T-Mobile’s “Pay for your device each month” model, the power of high-end devices like the Galaxy S4 become affordable to tens of millions of additional users.  This is also will be very good news for Apple.

In the “It’s good to be king” column, Amazon is facing a fresh set of charges alleging that it is taking price increases on books where there is less demand (and as a result less competition) for the title.  The first report of this came from The New York Times on Friday.  This is an excellent article, but leaves me at a loss – don’t most publishers have their e-book formats distributed across multiple operating systems (Amazon, Google, Apple, Nook)?  Did Amazon simply raise the price to the Google Books level (I spot checked several popular books and they all happen to be nearly or exactly the same price)?  Regardless, this article could not come as a less opportune time for Amazon as the Apple price fixing trial awaits a decision.

In the “Every dog has his day” column, Xobni (Inbox spelled backwards), an innovative yet aging contact management application was purchased by Yahoo! for a rumored $30-40 million (although there appear to be another $30 million or so in earnouts according to TechCrunch).  I was a Xobni user during the Mobile Symmetry (MS) days.  The software in 2009 was better than anything else in the market – it tried.  But, as my former MS colleague, Neil Tenbrook, said, “This contact management stuff is hard!”  Xobni raised $42 million (not even a 1x return before earnouts), had 100 million+ Microsoft Outlook downloads, and some success in the iOS, Blackberry and Android formats.  But it missed the restructuring of information, the demise of email as a communications medium, and the rise of contact management through social/ business networks.  Good luck to the team as they integrate into Yahoo – if done right, I might even rethink using a Yahoo email account.

Finally, in the “Just Weird” column, we have Prince.  In a wide-ranging interview with V magazine

, he is asked whether he owns an iPhone.  Prince’s response:

I think there is a bit of Prince in all of us.  Even if it’s a very tiny amount.

This week, we continue our evaluation of second quarter earnings.  Here are our findings to date:

That leaves us with cable and LEC/ CLEC wireline earnings.  As you can see from the table at the end of this column, publicly traded cable stocks have been driven up in the past month by M&A speculation.  Through mid-April, only Comcast and Charter had posted gains for the sector.

Outside of synergy speculation, there are two reasons to be excited about cable and, to a lesser extent, LEC/ CLEC broadband.  First, the housing sector is beginning to recover.  As the chart from the St. Louis Federal Reserve shows, new housing starts are beginning to come back from historical lows. 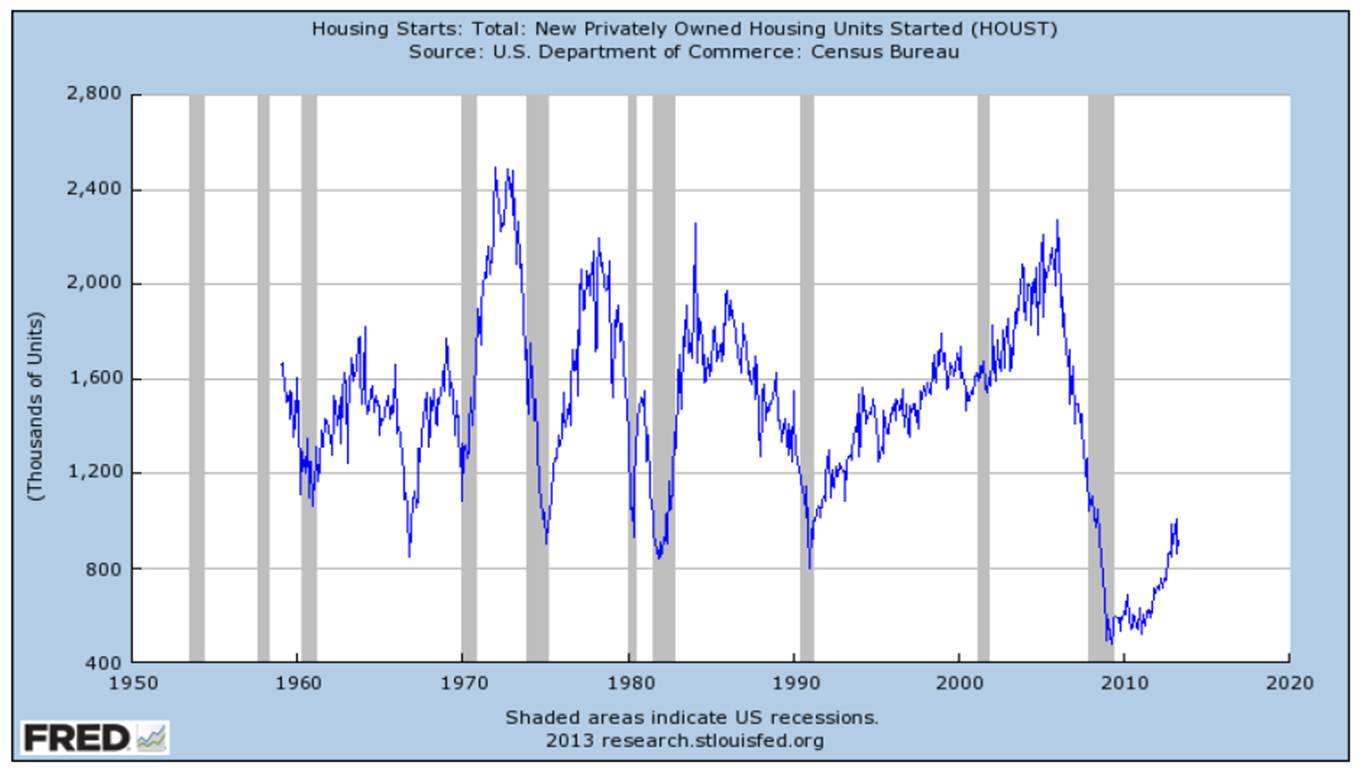 Because we suffered a 75% decline in new housing starts over three years, it’s hard to see the bottom.  Clearly, however, we hit it in 2009 and a have recovered about half of the expected gains.  (Note:  that leaves at least 500,000 new units to get back to a median historical level for the industry, or about $600 million in new telecommunications services opportunity).

However, with the exception of Arizona, the states mentioned are in the heart of AT&T territory (although parts of FL and NC are managed by CenturyLink).  This is where they have concentrated much of their fiber investments for the past decade.  When the South and West recover, AT&T’s opportunity grows.  This is one of the reasons why we started to see consumer revenues grow in Q1 (+2% annually) and why 2013 will be the fastest growing year for U-Verse since their early launch days (2008).  With “mover” activity on the rise into and within these markets, it’s a promising time for AT&T.

On the enterprise front, fiber and Ethernet connectivity from office buildings to geographically redundant and secure servers is growing.  The transition from client-based servers to private and “hybrid” clouds began in 2005 (if not earlier).  Much (although not all) of the server growth for the mid-market and non-essential enterprise information is occurring offsite.  This is driving up the need for bandwidth and accompanying managed services.

Since this issue is running a bit long, I’ll reference the latest earnings and investor conference presentations from tw telecom (TWTC) as reference for fiber/ Ethernet trends.  They are investing $350-370 million in 2013 to densify their networks in 75 markets and satisfy the “fiber to the building” need.  While they will face formidable competition from Verizon, AT&T, CenturyLink/ Savvis, Zayo, Level3, and Comcast (and Time Warner) Business, the dynamics of the recovery are covered in their earnings and investor conference discussions.  Companies that are successful in this space are unwavering, consistent, and patient.  There are no “quick bucks” with metro fiber.

Next week, we’ll take a closer look at Dish’s options after Sprint/ Clearwire (opinions welcome).  Until then, if you have friends who would like to be added to this email blog, please have them drop a quick note to sundaybrief@gmail.com and we’ll add them to the following week’s issue.  Have a terrific week! 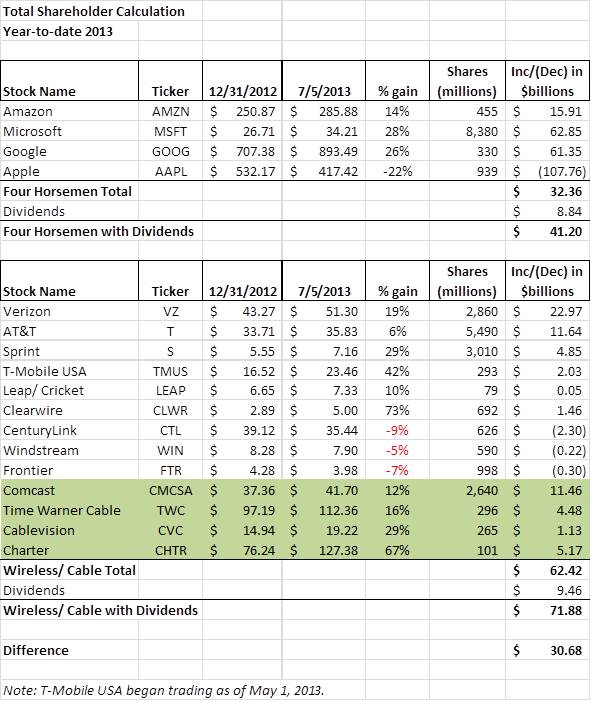