The Sunday Brief: Candidate Sanders’ Internet Plan – Out of Bounds? 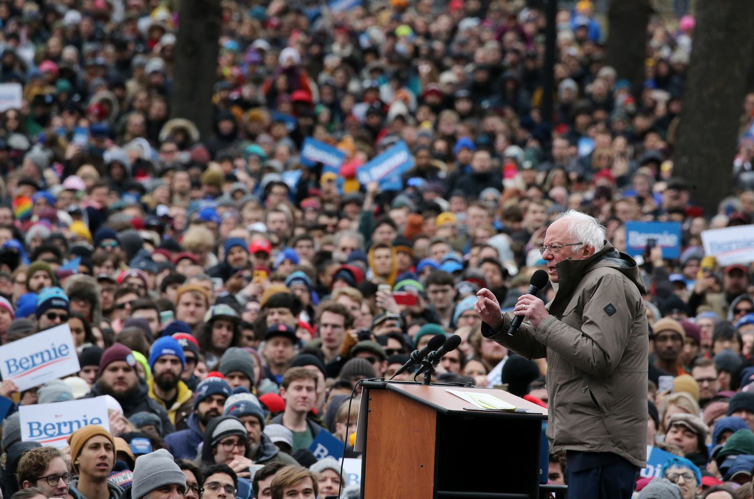 Greetings from Davidson and Charlotte.  It’s been a very busy week with Covid-19 concerns taking center stage.  Since many of you commented on the charts from last week, here’s a refreshed version (reflecting prices as of Friday’s market close):

Through last Friday (Feb 28), the 2020 YTD performance losses were $73 billion for the Fab Five and $59 billion for the Telecom Top 5.  Said another way, as of Friday March 6, ~4 cents of every Fab Five dollar that was gained in 2019 (and ~ 17 cents of the Telecom Top 5) has been given back through this year’s ups and downs.  And the only two stocks in both universes that are down double digits YTD are Comcast (with theme parks accounting for 2% of total 2019 EBITDA) and Facebook (which could be for a variety of reasons).

Without a doubt, things could certainly be worse – a lot worse (look at UAL or LUV or even XOM).  And, despite executive branch prognostications, there are going to be many more cases of the virus.  But the telecom world is not facing demand issues (data growth will continue to be 30+% this year and next), and, while balance sheets are not perfect (Charter the most highly levered of any company above but has very healthy cash flows), interest rates are headed lower which helps net incomes.

As the opening picture depicts, we are going to start this week’s column with a discussion of candidate Sanders’ Internet for All plan, viewed from a long-term lens.  Then we will discuss several key events of the past week as TSB Follow-Ups.

I understand that several of you did not receive last week’s column.  It is available online at the new and improved Sunday Brief website (Beta) here.

The Sunday Brief has a long-held libertarian streak when it comes to telecom policy.   We are pro competition and innovation, eschewing any attempts of large entities (including governments) to act like Cronos.  Experience breeds realism, however, and we have learned over nearly three decades that politics and effective telecom policy rarely make good bedfellows. In the 2010 midterm elections (where the Republican party retook the U.S. House of Representatives and the Senate), Charles Krauthammer famously penned an editorial which stated “The lesson of [Election Day] is that the American game is played between the 40-yard lines. So long as Democrats don’t repeat Obama’s drive for the red zone, Democrats will cyclically prevail, just as Republicans do.” Our US telecom policy, with few exceptions (one of which we will describe below), has stayed between the 40-yard lines.  We have written with great angst about the Trump administration treating telecom policy like a light switch (here) versus undertaking comprehensive legislative solutions, and taken to task the hypocritical aspects of the Obama administration’s net neutrality and other policies (here and here and here and here).  However, these are criticisms largely within the 40-yard lines – M&A/ Antitrust debates, network management practices, vague and potentially misleading naming/ advertising, state vs. federal policy, minimum internet speeds, etc.

Then there’s the Sanders’ plan (link here), which, in our opinion, fundamentally changes the role of telecommunications providers and is clearly outside the 40-yard line boundaries.  While some may discount his plan as posturing or a bargaining position, it’s so extreme that it’s hard to even think about middle ground.  Here are some of the highlights:

1. Unwinding of the NBC Universal/ Comcast merger and the Warner Media/ AT&T merger.  Sanders would “Bar service providers from also providing content and unwind anticompetitive vertical conglomerates.”  This is a reversion to the long-standing separations policy that existed until the rise of the Internet, which might barely fall within the 40-yard lines IF we had not had the precipitous rise of over the top streaming activities.  By this rule, Altice could not own News 12 or Cheddar, regional sports networks (think Spectrum Sports in Los Angeles) would be forcibly separated from their cable counterparts, and HBO would return to being an independent company.

2. Reclassify all telecommunications providers (including wireless and cable) as Title II.  Sanders would “Classify broadband providers as common carriers under Title II and reinstate net neutrality regulation,” “Work with Congress to codify net neutrality protections into law to prevent a future FCC from repealing them once again,” and “Appoint members of the FCC who will use Title II authority to promote competition, choice, and affordability for broadband service.”  Sounds innocent enough (especially legislative solutions to the on-again/ off-again rulings of the FCC and the courts), until this policy is coupled with #3.

3. Price regulation and elimination of data caps and throttling.  Sanders would “Increase the FCC definition of minimum broadband speeds to 100Mbps download speeds and 10Mbps upload speeds,” “Instruct the FCC to regulate broadband internet rates so households and small businesses are connected affordably,” and “Eliminate data caps and ban throttling.”  Unlike traditional utilities, which are permitted to charge by the gallon (water), cubic foot (natural gas), or wattage (electricity), there would be no metering for broadband.  And if the service providers put up a fight (especially cable), an activist FCC (with authority from Congress) would flex their executive muscle and restart the process of unbundled network elements (UNEs). Unbundled cable and fiber worlds combined with price and service regulation… and it gets even worse.

4. “Provide $150 billion through the Green New Deal in infrastructure grants and technical assistance for municipalities and/or states to build publicly owned and democratically controlled, co-operative, or open access broadband network.”  To put this into context, the highly controversial Broadband Technology Opportunities Program (BTOP – see New York Times article here on the waste created) was $4 billion.  President Sanders’ plan would increase this by 37.5x.  To reiterate, these are grants, not low-cost loans.  Zayo, one of the largest fiber providers in the country, has around $9 billion in gross property, plant & equipment ($5.8 billion net).  The Sanders plan would create sixteen Zayos worth of additional fiber with free money.

(Should this policy plank gain increased traction through the summer, I will ask my Davidson friends to weigh in on the Mi-Connection/ Continuum municipal cable experiment.  This town-funded system was eventually sold to TDS with 89% voter approval, and Davidson would definitely be considered a Bernie-friendly community).

Taken together, the four planks delineated above would produce a government takeover of telecommunications infrastructure.  It would guarantee returns that would be consistently below carriers’ cost of capital and would strangle innovation.  With a fully implemented Sanders policy, there would certainly be a 6G, but what cash flow would fund any subsequent generations?

3. Focus on accelerating the potential wireless replacements for traditional broadband services as opposed to regulating today’s technologies.  As we have discussed in this column as recently as January, the FCC’s enablement of sharing in the 3.1-3.55 GHz band (450 MHz) is as disruptive as implementing Title II.  More shared spectrum is very threatening to the status quo – talk about spectrum enablement versus free money.  The market will do the rest of the work.

2. Rather than focusing on Huawei, change the discussion to interoperability between existing switch providers.  Why are Ericsson, Samsung, and Nokia equipment unable to talk to each other, forcing wireless carriers to have entire regions dedicated to a single equipment provider?  As we discussed in a Sunday Brief titled “Programming Tomorrow’s Network,” there should be more innovation applied to separating hardware and operating system layers.  If that tie is broken, hardware and software decisions can be split and the MS-DOS (early IBM PC operating system) of telecom can be created.

3. Acknowledge that broadband is but one part of a larger rural infrastructure issue.  In the New York Times article link above, they talk about the fact that Agate, Colorado, has no bank, no Union Station depot, but does have an elementary school with 11 students and three fiber providers.  The article also goes on to state that 14% of the total funding ($594 million of the total $4 billion) was suspended by the Commerce Department inspector general and goes on to mention several examples of outright fraud.  More free money created misbehavior.

This is a wise and practical application of block grants.  Several Sunday Brief readers were a part of the BTOP grant evaluation – we can’t go back to that extremely subjective process.  Lots of broadband with insufficient transportation, electrical, or other infrastructure creates an unbalanced and uncoordinated result.  Local decision makers tend to be better at directing and planning these types of resources than central planners.  Improved wireless technologies likely replace what existing infrastructure exists.  And more fiber in rural and underserved America sounds great, but it only solves part of the problem– this process can apply to underserved urban areas, as well.

Bottom line:  There is a lot to fear from a Sanders presidency when it comes to telecom policy, and we are potentially one Biden debate gaffe away from underdog Sanders to nominee Sanders.  His Internet policy is clearly outside the 40-yard lines.  While his policies will result in Internet for All eventually, they will weaken the nation’s overall wireless and wireline companies and waste hundreds of billions of tax payments.  Progressive policies should focus on enabling more shared spectrum, creating more software development capabilities, and delegating any infrastructure loans to state and local governments.

That’s it for this week.  Please keep the comments and suggestions coming, and, if you have time, check out the new and improved website here.  If you have friends who would like to be on the email distribution, please have them send an email to sundaybrief@gmail.com and we will include them on the list (or they can sign up directly through the new website).