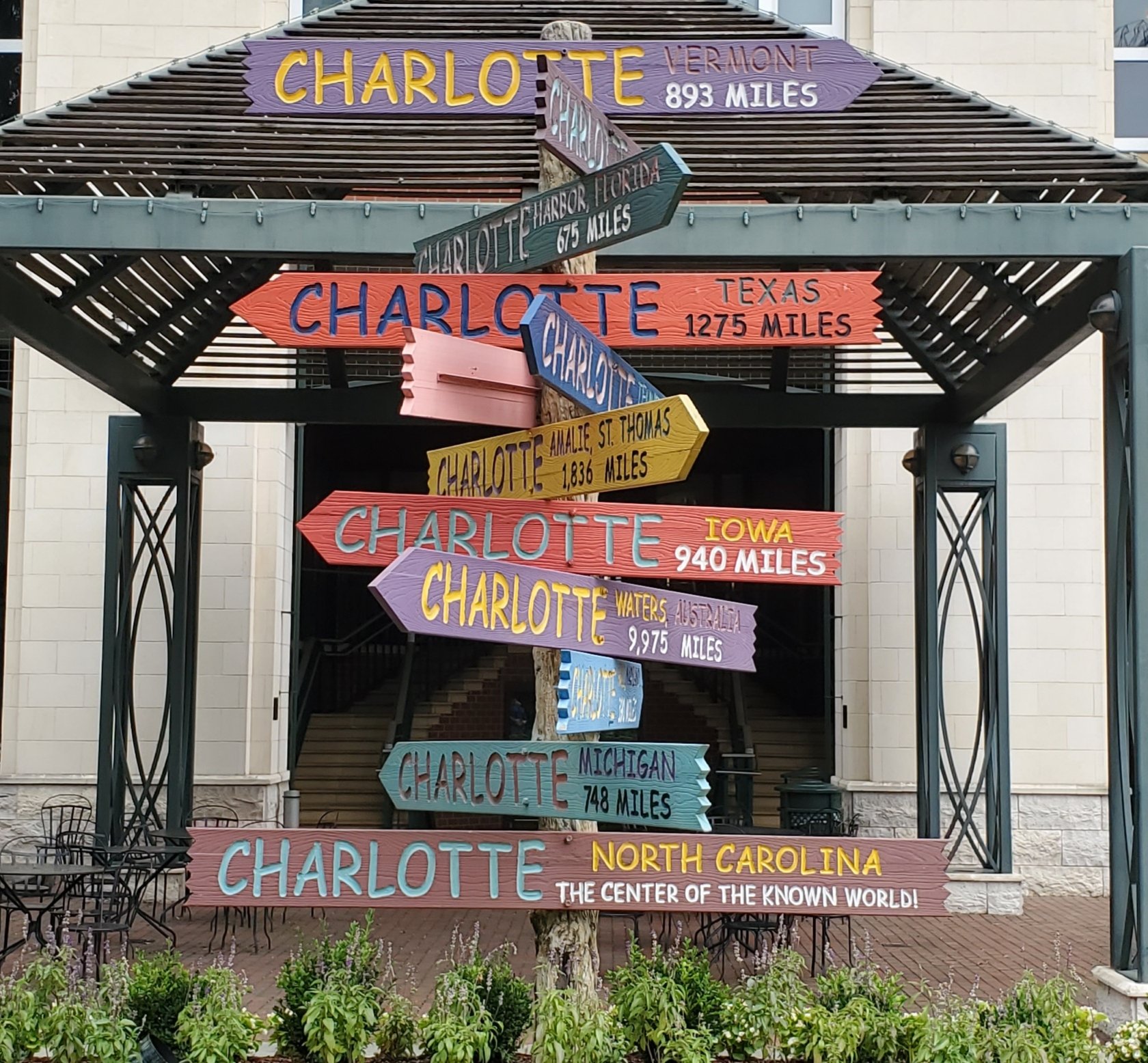 Greetings from Charlotte, North Carolina (Uptown signpost pictured).  We will attempt to answer the question “Do the state Attorneys General have a case?” by summarizing and analyzing their case (find a copy of the complaint here – see point 7).

Following the ebullience of DOJ approval and a very strong earnings report from T-Mobile, investors digested Verizon’s (generally strong for wireless, and weak relative to AT&T for wireline) and Sprint’s (generally weak, Free Cash Flow negative) earnings.  We will weave some recent earnings results into this week’s TSB, but, if you want all the details and analysis, look to the Deeper post we will have on the website related to “State Attorneys General Make Their Case”

Let’s dig into the basics of the case by understanding the plaintiffs, the nature of the complaint, and possible remedies/ compromises.

For those of you who are not following recent events closely, fourteen states and the District of Columbia are filing suit to permanently block the merger of T-Mobile and Sprint.  Those states are as follows: 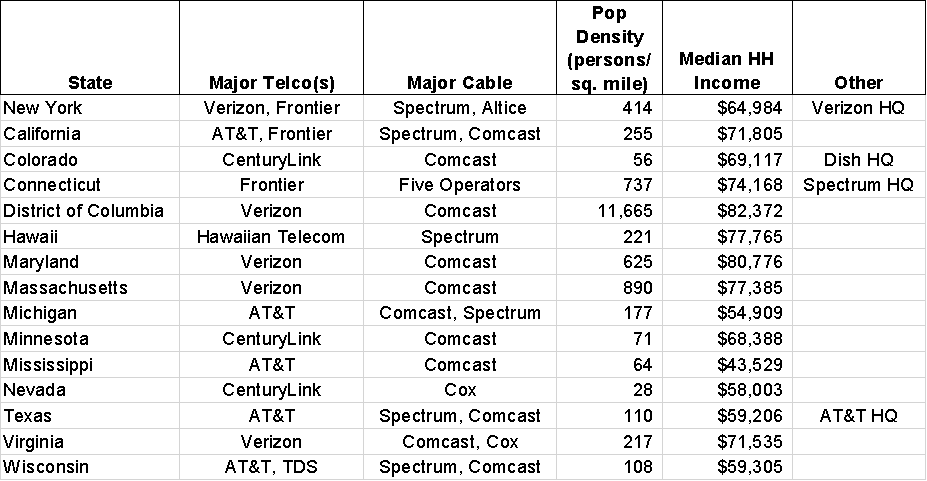 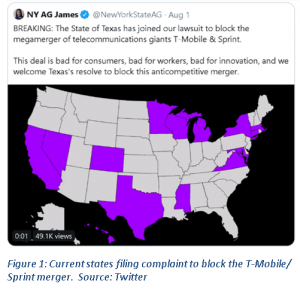 There is a very good balance of incumbent telcos represented by the suing states and DC.  In fact, outside of Texas (let no one forget it’s the HQ of AT&T), there’s really no representation of the former Bell South or Southwestern Bell territories.  It is interesting that 11 out of the 15 states or territories have a population density that is higher than the national average (the promise of rural buildout is less attractive in these areas than in Kansas, Nebraska, Wyoming, Oklahoma or the Dakotas).  And there are some notable dense areas that are missing:  New Jersey, Rhode Island, Delaware and Florida all have high population densities but have not joined the group.   Florida and New Jersey split cable coverage between Comcast and Spectrum. 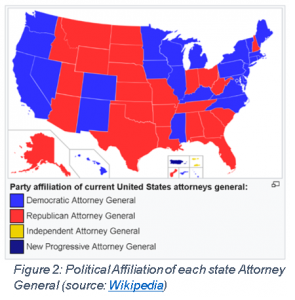 The head-scratcher on this list is Colorado, home to Dish (admittedly not as much in the picture when the lawsuit was filed in mid-June) and a relatively less dense area.  But it also happens to be home to a significant and growing base of Comcast, Spectrum, and CableLabs employees and is one of the fastest growing states in the country.  And, as the nearby chart shows, Colorado has a Democrat Attorney General (profile here).

What isn’t a surprise is that 11 out of 15 states have a strong Comcast presence.  Admittedly, Comcast is pretty much everywhere (see map from Broadband Now here), and Illinois

(Comcast is primary provider to Chicago), Washington (Seattle, Tacoma), Georgia (Atlanta), Florida (Miami) and Pennsylvania (Comcast’s home state as well as provider in Philadelphia and Pittsburgh) are not currently represented in the legal action.  But if we see others join the lawsuit next week, don’t be surprised if they are one of the five mentioned above (Washington would be a particular blow to T-Mobile whose HQ are in Bellevue).

Bottom line:  There are 26 states with a Democrat Attorney General, and half of them have joined together to block the T-Mobile/ Sprint merger.  The one Republican state that recently joined the lawsuit happens to be home to T-Mobile’s former proposed merger partner and current competitor, AT&T.  While there is no clear pattern beyond political affiliation, it is interesting to note that Comcast/ Xfinity Mobile has a major presence in many of the suing states.

The case is best summed up in the last section (104) of the complaint: “Unless enjoined, the Merger likely will have the following effects in retail mobile wireless telecommunications services across the nation, among others:

Simply put, the telecom marketplace is better off with the current four-company structure, warts and all, then it would be with a three-company structure and Dish as a new entrant (with Sprint’s 800 MHz spectrum).  The complaint contends that prices would rise 17-20% as the new T-Mobile would exercise their dominant position in major metropolitan areas such as New York and Los Angeles to keep prices (particularly prepaid) high.  It also contends that fewer MVNOs would emerge and current MVNOs like Tracfone/ Straight Talk (20 million total customers) would struggle because neither the new T-Mobile nor Dish would make 4G or 5G capacity available at attractive prices.  Finally, they contend that the consequences for the new T-Mobile failing to fulfill their deployment promises to the FCC are too weak.

While the actual market shares are redacted in the complaint, the Herfindahl Index information and the disclosure that the new T-Mobile would have more than 50% market share in the New York and Los Angeles CMAs (see sections 48 and 49 in the complaint) is astounding (full map of the FCC CMAs and RSAs here).  CMA 1 and 2 are not small geographic areas, and, as we discussed last week, Dish owns some additional 600 MHz spectrum covering CMA 1.  The greater question is “If true, what have AT&T and Verizon been doing in these markets for the last seven years?  Have they been retreating to the Connecticut and New Jersey suburbs (as Long Island is covered by CMA 1)?”  The disclosure is damning to Verizon and AT&T as it represents their two largest facilities-based (incumbent telco) footprints. 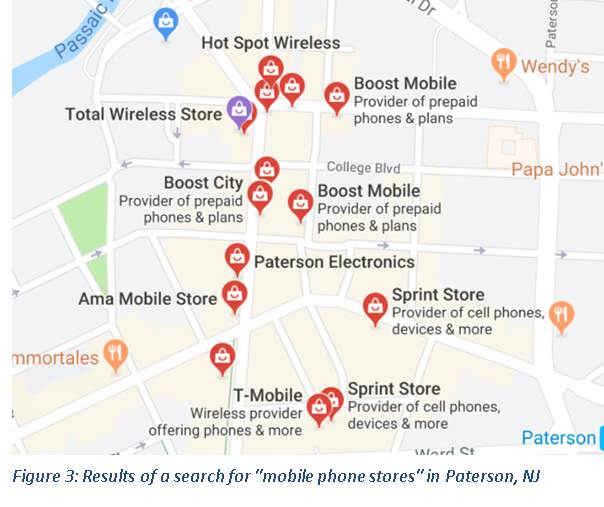 As for the argument that low-income subscribers would be disproportionately impacted, let’s have a look at the map of “mobile phone shops” in Paterson, NJ (I had the opportunity to tour every one of these and a few more as a part of my MVNO education in 2017).  As you can see from the nearby picture, there are 17 stores within a 12 square block radius selling every major carrier.  There’s a Boost City and two Boost Mobile stores.  There’s a Total Wireless (Tracfone MVNO served exclusively by Verizon) and AT&T, Verizon FiOS, T-Mobile and Sprint retail stores in the mall at the bottom of the picture.  There are traditional bodega-style shops selling H2O (AT&T MVNO), Ready Mobile (Tracfone MVNO served by T-Mobile), Ultra Mobile (T-Mobile MVNO) and several other brands.

Competition would suffer if T-Mobile eliminated their MVNO business entirely, but there’s absolutely no indication that they would ever throw Tracfone to the curb (their recent earnings call language backs it up).  But if they did, AT&T (Cricket) and Verizon (Total Wireless, Xfinity Mobile, Spectrum Mobile) would gladly take their customers.

If space permitted, there’s an argument to be made that if Apple’s new credit card is successful (see latest Bloomberg article here), the concept of device financing through a traditional carrier will be a thing of the past in several years and we will be ordering iPhones with Mint Mobile-like online plans.  Traditional carrier stores will go the way of bank branches (minus the need for an ATM).

Bottom line:  The case sounds strong, but there’s plenty of contrary evidence indicating that the new T-Mobile would not behave like AT&T and Verizon just because it is bigger.  The Herfindahl Index results highlight the metro retreat of the larger established brands more than the growing domination of their smaller rivals.

If a settlement can be achieved, it could include the following:

Rather than focusing on the higher market share that the new T-Mobile will have (which has changed dramatically since 2012), the Attorneys General should focus on how to provide incentives to Verizon and AT&T to reestablish their presence in urban areas.

Bottom line:  There’s a deal to be made.  Rather than run the court through 5G cost models and timelines, the new T-Mobile executives and state officials should create a framework which will result in greater citywide competition and hasten the deployment of tomorrow’s network.

Next week’s issue will summarize 2Q earnings and look at Verizon’s new unlimited pricing plans.  If you would like a copy of either the Top 10 Trends or the IoT Basic presentation discussed in last week’s TSB, please let us know at the email below and we’ll get you a copy.