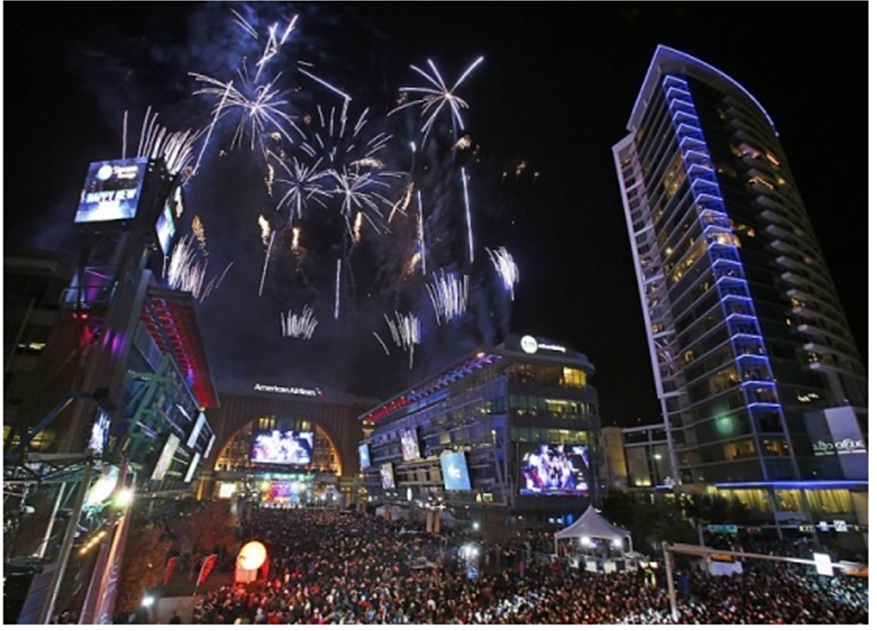 Happy New Year from Dallas, Texas!  Hopefully each of you found some time to relax and recharge over the past few weeks.  2014 is going to be a year of change in the telecommunications sector, and focus is going to be even more critical than ever. The economic recovery, which started in the second half of 2013, will continue, but will be very unevenly distributed by state/ region.  The coverage drumbeat that has dominated wireless carrier investor presentations over the past four years will be replaced by talk about competitive response.  And the prospect of additional consolidation will be concentrated to a few transactions which will be heavily influenced by skeptical and unfriendly regulators.

Before moving into a short preview of next week’s Consumer Electronics Show, let’s see how telecom stocks fared against their software-focused bretheren.  As many long-time readers to The Sunday Brief know, we have been tracking the annual progress of The Four Horsemen (Apple, Google, Amazon, and Microsoft) versus a large selection of telecom and cable stocks.  Please note:  These numbers are not intended to provide a point estimate of the performance of any particular stock, but to give a general idea of where value is being created in the industry. 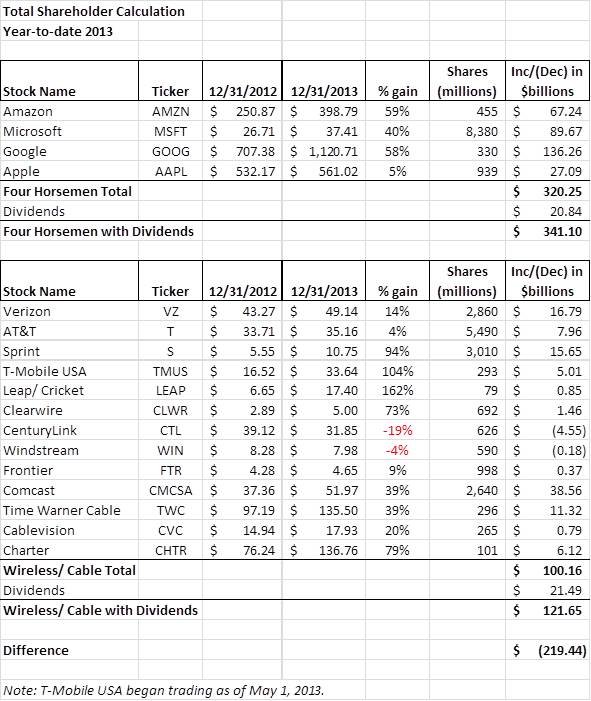 Earlier in the year, it appeared as if the Four Horsemen would lose the 2014 value creation edition.  Apple was on the ropes, and Microsoft and Google were rising slowly.  After second quarter earnings were announced, that changed, as investors realized that advertising revenues and acquisition costs were likely to show favorable trends through the rest of  2013.

The surprise for telecom and cable is that of the $215 billion that has been added to the industry in 2012 and 2013, over one third of it ($77 billion including dividends) has come from one company – Comcast.  That is slightly less than the value added by AT&T and Verizon over the past two years (also including dividends).

The rise in Comcast’s share price is not only a reflection of the share of decisions growth that cable has enjoyed with High Speed Internet (a topic frequently discussed in seven Sunday Briefs in 2013), but also an indication of how programming and transmission can work together to achieve greater profitability .  NBCU was in the ditch, and Comcast had one heck of a tow truck.  While there is a lot of concern about having content and pipes under one roof, it’s clear that Steve Burke and the entire management team at Comcast transformed NBC Universal.  This is an even greater feat when you consider the vastly different perspectives and decision making processes for a (short-lived asset) programming company versus the fiber mentality at Comcast’s cable division.

Comcast’s $70+ billion shareholder reward is big news, as is Sprint’s $25 billion in shareholder value added over the past two years.  But nothing compares to the $400+ billion comeback made in 2013 by the Four Horsemen.  As of April 19, 2013 (the last day before the first quarter earnings releases began), the Four Horsemen had lost over $90 billion in shareholder value.  Apple was in freefall at $392 per share (it started 2013 at $532 per share and 2012 at $405 per share).  Retail concerns were beginning to emerge about Amazon, keeping share gains to a minimum.  And several analysts were beginning to fret about the upcoming Xbox One launch and the overall profitability of the Xbox business for Microsoft.

As the Indianapolis Colts showed on Saturday, the game is not over until all four quarters have been played.  Apple demonstrated continued global demand for its products and services (including one of the most underreported stories of the Holiday – the finalization of their agreement with China Mobile which will cement TD LTE into all future iPhone designs).  The Xbox One launch in November was constrained by supply, not demand.  Holiday shoppers flocked to Amazon, especially in the days immediately prior to Christmas Day.  And Google continued to develop and acquire software companies that complemented their core business.

As a result, The Four Horsemen did it again, creating $200 billion more in market value in 2013 than their telecom and cable peers.  This is up sharply from $58 billion in 2012 and $88 billion in 2011.  All told, nearly $350 billion in value has been generated over the past three years by the software-oriented companies who depend on the cable and telecom pipes for their livelihoods.  Something to ponder as “experts” debate net neutrality in upcoming months.

Looking ahead, many of you will be attending the Consumer Electronics Show (CES) next week.  While most of you are veterans of the “World’s Fair of Technology” (I saw this title in one preview article this week and it stuck), some of you may be heading out for the first time (my advice: wear comfortable shoes).  This will be my fifth show and third straight year.  I have seen the introduction of webOS, e-readers, 4K HDTV, next generation headphones and Ultrabooks.  There will undoubtedly be a new product launch next week that will capture the hearts of many attendees.

Beyond the hardware launches, T-Mobile announcement, and what promises to be a rousing speech about the Internet of Everything from Cisco CEO John Chambers, there are three bigger themes to think about as you walk the floor or finish your second breakfast meeting:

Those of you who are long-time readers probably remember an early column (2009) where I wrote about widespread adoption of HDTV as a result of Walmart’s electronics push.  If the latest equipment cannot survive the “compared to current” test that Walmart buyers will undoubtedly make, how can volumes materialize?

Can a Samsung (or any other) smart watch really make an impact beyond the earliest of adopters for $300?  Can Google Glass sell at 4x the price of Ray-Ban Vagabond sunglasses and achieve any volumes?  Without Neflix 4K streaming (which is supposedly coming in 2014), will 4K TV sales be limited to a small addressable market?

Think about examples where products crossed the adoption chasm.  When new Kindle versions arrived in 2010 at $139 (wi-fi only) / $189 (wi-fi and AT&T connectivity), they immediately became a staple for tens of millions of devoted readers.  In 2012 and 2013, the cost of over the ear headphones dropped below $200 and as a result became more attractive to millions of Millennials.  The iPhone migration story (with the exception of the plastic iPhone 5c) has been one of disciplined mainstreaming supported by strong wireless carrier support.

When you are walking the CES floor this week and are amazed by a product’s technical functionality, ask yourself “Could this product survive a side-by-side WalMart test?”

When Samsung shows off its ATIV Tab computer, it usually shows the keyboard with the tablet (see picture above).  This display would have been unthinkable two years ago – this was a tablet after all, not a glorified netbook.  Combine this with the fact that Intel is aggressively pushing for both Windows 8 and Android on the same chipset (thanks to their investment in Bluestacks – see article here), and one can see the struggles that can and will occur as the phablet/ tablet/ laptop metamorphasis occurs.

One of the questions I will be asking as I walk the floor is “How have/ will the inputs into each device be modified as a result of centralized/ cloud computing?  Can we get to one or two inputs per device?”  Each input (included or excluded) has a discrete economic value.

For each system, a few messages might seem innocent.  But combine 30 systems generating 3-4 messages per month, and messaging loses its effectiveness.  One of the ideas I have been contemplating is how to consolidate and prioritize messages across applications, creating a message portal and allowing users to filter the most important messages to a specific device.  (If any of you would like to assist, I am willing to share in the responsibilities and rewards).

As I am walking the floor, I will be thinking “What type of messages will this device generate?  Can these messages be combined with other information (e.g., troubleshooting information) to alert and possibly resolve electronics issues?  How can and should messages be grouped across systems to produce a superior customer experience?”

I have already violated my brevity charter, but there’s a lot to think about as we enter 2014.  Electronics manufacturers rarely get it right the first time.  Many electronics products fail to consider the mainstreaming process in their initial design and distribution.  And the IoE creates a lot of messaging noise which threatens its relevance and sustainability.  That’s the lesson of CES – there’s always a problem to solve.

Next week, we’ll recap the show and begin the discussion of first quarter earnings drivers.  Until then, if you have friends who would like to be added to The Sunday Brief, please have them drop a quick note to sundaybrief@gmail.com and we’ll subscribe them as soon as we can.  Happy New Year!