The Case Against the T-Mobile/ Sprint Merger 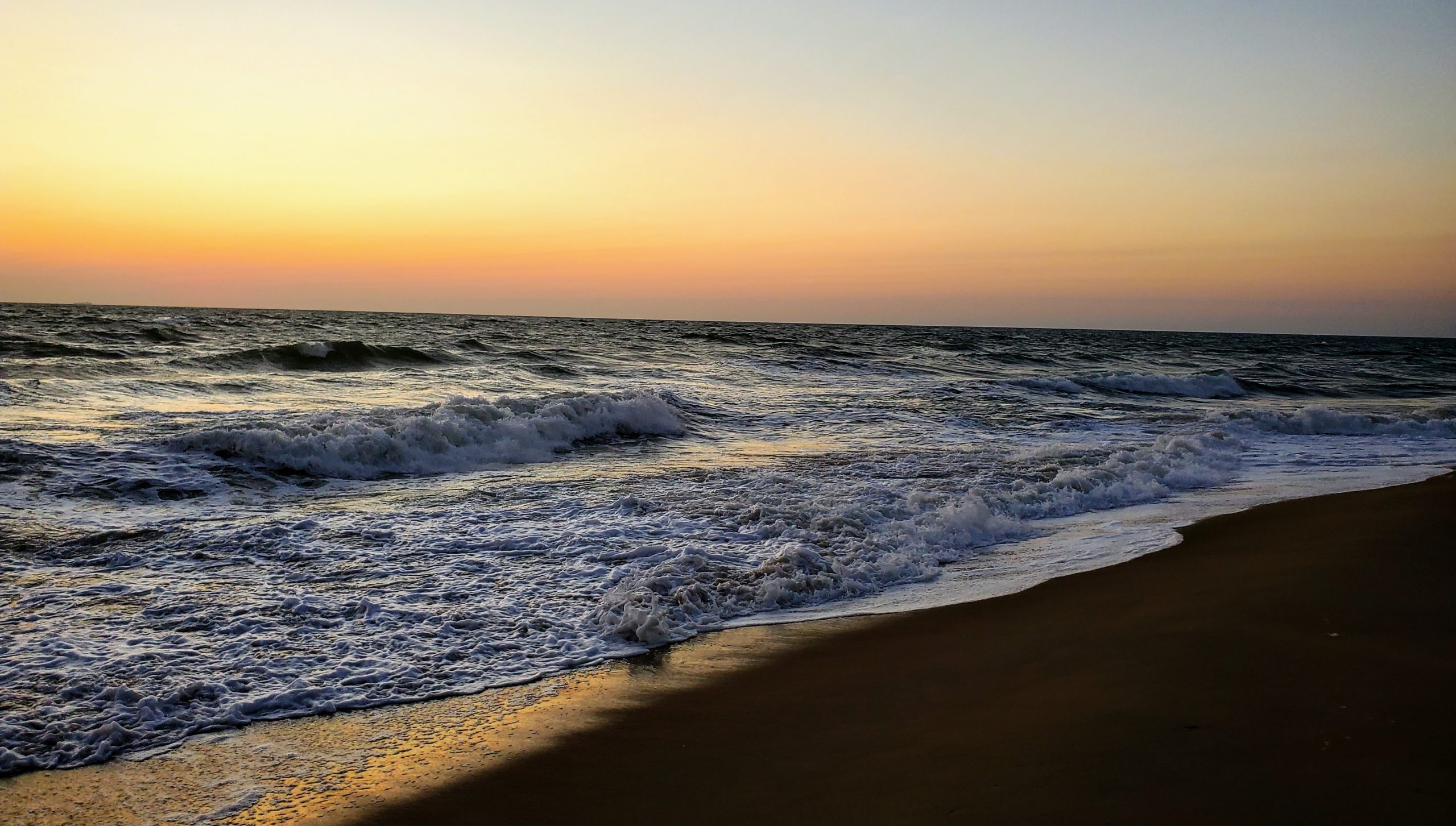 Greetings from Davidson, North Carolina, and Virginia Beach, Virginia (sunrise pictured), where we are enjoying several days of R&R prior to two weeks of travel.  This week’s TSB will contain an update on and a detailed analysis of the state attorneys general case against the T-Mobile/ Sprint merger.  We will also have several TSB Follow-Ups.

Many thanks to those of you who suggested additional titles for the History of Technology.  Next week, we will provide an amended list of the top six most important telecommunications and technology chronicles.  If you have additional suggestions, please send them to sundaybrief@gmail.com.

The Implications of This Case are Significant

One of the most important events to impact the telecom industry for the next decade is the now nineteen state attorneys general lawsuit against T-Mobile USA and Sprint (copy here).  If the attorneys general successfully prosecute their case, Sprint will need to find another merger partner or significantly restructure their balance sheet.  If the wireless companies win, new T-Mobile will prove a formidable challenger to AT&T and Verizon in postpaid and enterprise, and prepaid (or credit-challenged) wireless subscribers could see higher prices or reduced service quality.

We devoted an issue to the trial in early August and believe that an update is warranted.  This week’s TSB examines the details of the complaint and provides insight into possible outcomes.

The case was originally filed in the Southern District of New York on June 11 (this date is prior to the late July DOJ settlement but after FCC Chairman Pai publicly supported the merger with conditions) by nine state attorneys general and the District of Columbia.  Ten days later an additional four states joined the amended complaint. 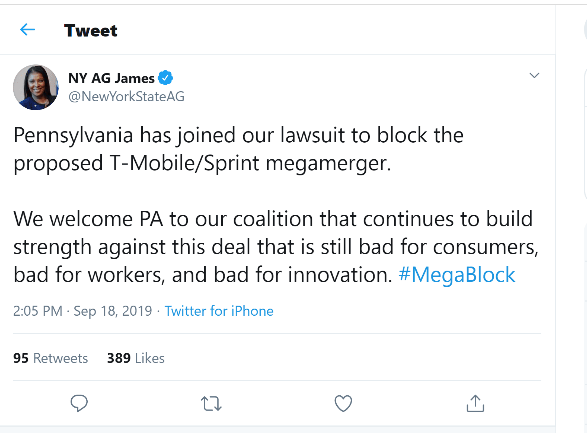 Texas’ Republican attorney general, Ken Paxton, joined the lawsuit on August 1 after fully reviewing the Department of Justice settlement with the merging parties and Dish networks.  “After careful evaluation of the proposed merger and the settlement, we do not anticipate that the proposed new entrant will replace the competitive role of Sprint anytime soon” stated Attorney General Paxton.  The Lone Star State continues to be the lone Republican attorney general in the complaint.  After Texas joined, the trial start date was moved form October 7 to December 9.  The case continues to be expected to last 2-3 weeks.  140 hours of total depositions were allowed by the judge.

The Case Against the Merger

The states make the following arguments in their June 11 complaint:

In addition to the document, Fox Business News is reporting that the states are preparing an argument that Dish, even with the terms of the deal we discussed in a previous TSB entitled “Playing Charlie’s Hand”, will be a financially weaker competitor than a non-merged Sprint.

Reframing and Refocusing the Argument

The state attorneys general make an average to weak case to prevent the merger of T-Mobile and Sprint.  Without a doubt, merging the third and fourth largest wireless carriers will create more competition for Verizon and AT&T with respect to multi-line, enterprise, and state government segments.  However, to contend that Verizon and AT&T have no competitive counterpunch in New York and Los Angeles is laughable.

Imagine the cross-examination of Ronan Dunne, Verizon’s CEO of their Consumer Group, or of Jeff McElfresh, the new CEO of AT&T Communications, concerning their respective companies’  competitiveness in their two most densely populated markets:

The answers will significantly diminish the argument that New York and Los Angeles (or any other major metropolitan market) are going to be markedly impacted by less investment.  Even if Boost faltered (and we have highlighted the execution risks that will occur with the transition from legacy Sprint to new Dish networks), Cricket (AT&T’s MVNO), Visible (Verizon MVNO started by ex-Verizon execs), Xfinity Mobile (Verizon MVNO), Spectrum Mobile (Verizon MVNO with core control ambitions), Altice Mobile (Sprint and AT&T MVNO with core control capabilities), Mint Mobile (T-Mobile MVNO), and Tracfone (a multi-carrier MVNO doing business as Wal Mart’s Straight Talk or as Ready Mobile) would jump at the opportunity to pick up 1-3-5 market share points.   Bottom line:  The reason why T-Mobile’s share is great in New York and Los Angeles is that they built robust networks and effective distribution channels in these markets.  Distribution barriers to entry for large, well-funded competitors are low.  As a result, the possibility, driven by new network (5G) deployment, that Verizon and AT&T, either on a retail basis or through MVNOs of their own, reverse the market share gains T-Mobile and Sprint have achieved over the past decade are high.  Distribution will follow investment.

On top of this, however, is the increased discussion of competition the new T-Mobile will provide in rural markets.  T-Mobile committed to deploy 100 Mbps speeds to 67% of the US rural population in six years.  From a competitive perspective, less densely populated areas have a longer payback because the addressable market (homes passed, number of wireless subscribers, machine-2-machine connected devices) is smaller.  Verizon and AT&T have enjoyed duopoly returns (which, when unregulated, can be greater than regulated monopoly returns), especially where they are also the incumbent telecommunications provider.  Bottom line:  The competitiveness ledger needs to account for the overwhelmingly positive impact the new T-Mobile’s commitment will have on widely dispersed markets.  This is not to diminish the need to serve poorer urban communities, but to acknowledge the increased risks taken in areas where few homes and people exist.

Finally, the likelihood of substantial interest in Dish’s new business model is underestimated.  Without going into all of the cost savings details of deploying the next generation of 5G standards (called Stand Alone 5G), Dish was smart to hold firm to having the option to deploy new systems when the lower cost structure was available.  (Here’s a very interesting article showing that there is increased interest among the carrier community in deploying Stand Alone 5G standards – it will quickly become the default configuration, and Dish will be a direct beneficiary).  It is difficult to imagine that a data-centric network will be unattractive to others, and that (gasp) it might be perfectly paired with the regional networks deployed by cable to support their MVNOs.  Bottom line:  Only the most delusional industry analysts think that Sprint can emerge from a failed merger without a recapitalization/ reorganization.  That will cost the telecom industry more than the risk of Dish building out their network (including 800 MHz from Sprint) and failing.  Trading the risk of a much less expensive new network build for the certainty of the long-term financial damage done through an inevitable Chapter 11 reorganization is rational and reasonable.

The trial date is a little more than two months away, and, from a thorough read of the initial and amended documentation, there’s no reason why the parties should not settle.  The attorneys general should focus their efforts on how to make Dish more successful, and not on how to maintain the status quo.

(For those of you who want to view some good dialogue supporting the settlement from Assistant Attorney General Makan Delrahim, this YouTube video of the September 17 Senate Judiciary Committee Hearing has two very interesting dialogues at minute 20 with Senator Klobuchar and at minute 54 with Senator Leahy).

— Performance Plus increased from 60 Mbps to 75 Mbps

This represents the 17th time in the past 18 years that Comcast has increased speeds.  Approximately 85% of Comcast’s 25.6 million (end of 2Q 2019) subscribers will see this increase.   This turns up the heat on their telco competitors to match the speed growth and increase their fiber builds.  It also means that many more Xfinity subscribers will enjoy higher speeds/performance working from home than at the office.  More on the speed increases from this GeekWire article.

At a minimum, these changes will double maximum speeds from the 1 Gbps in the current standard.  Assuming that the rollout of the standard leads to the first product deployment by the end of 2021, millions of existing customers will have the ability to have increased home and small business capacity. 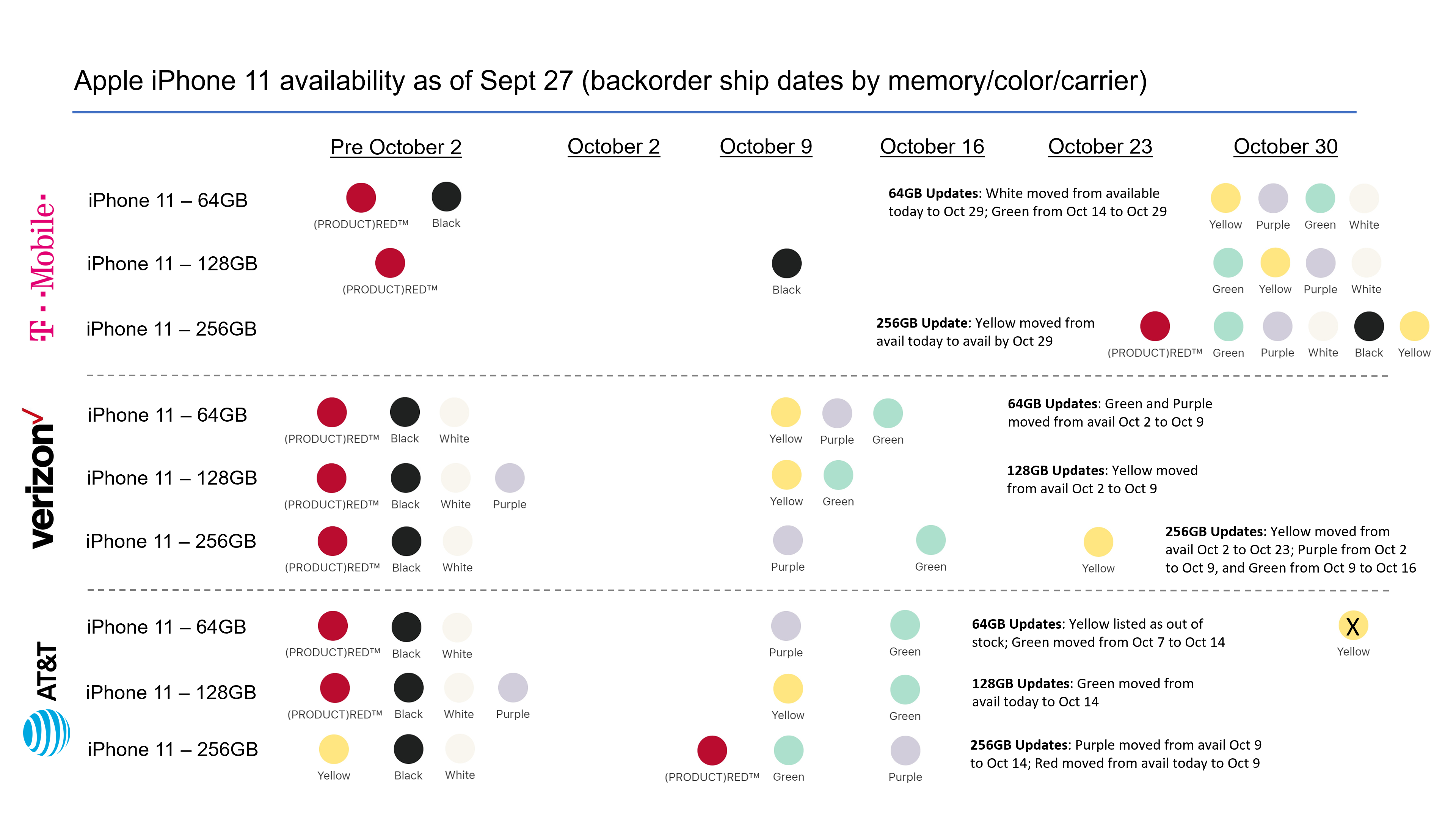 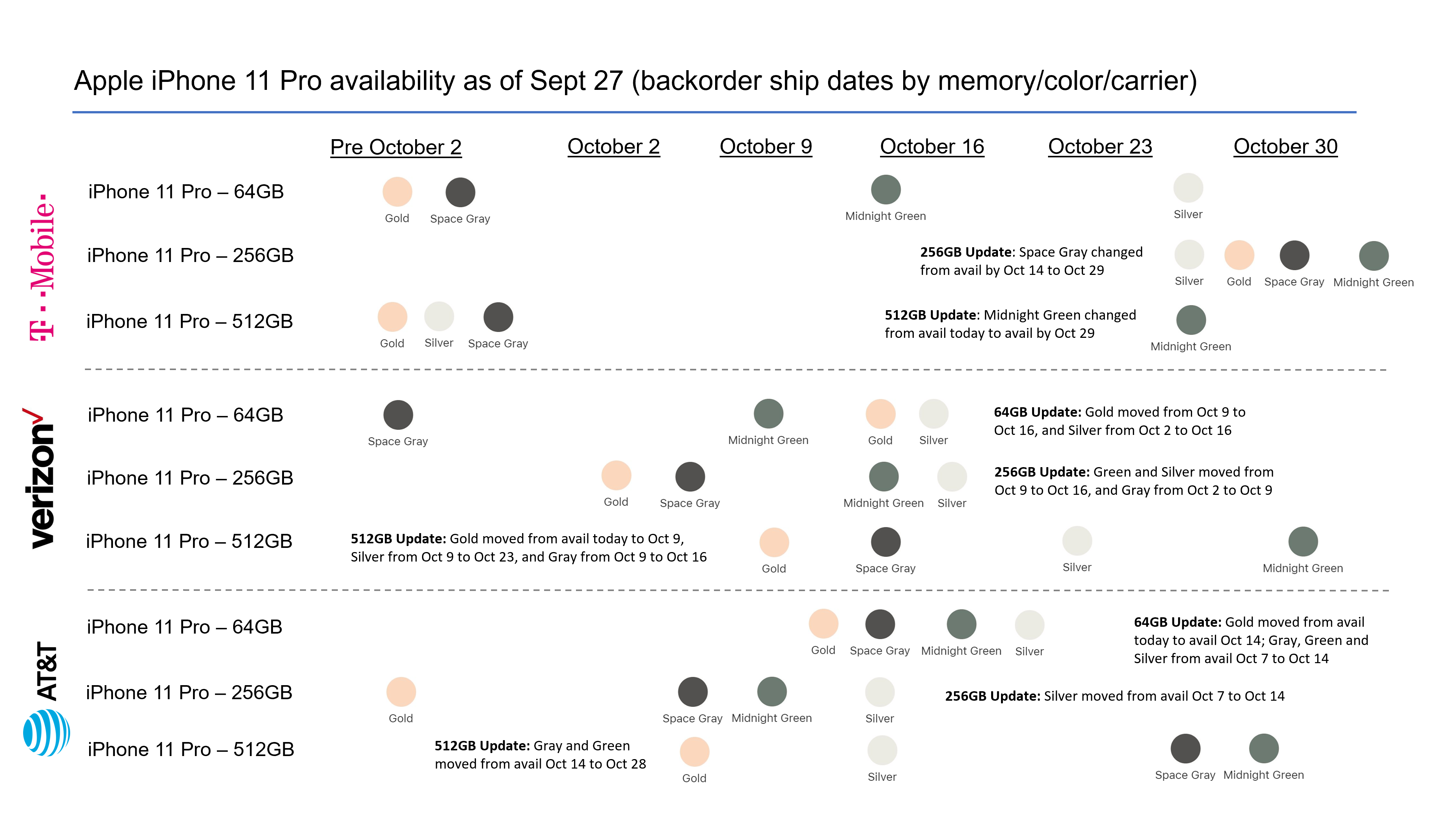 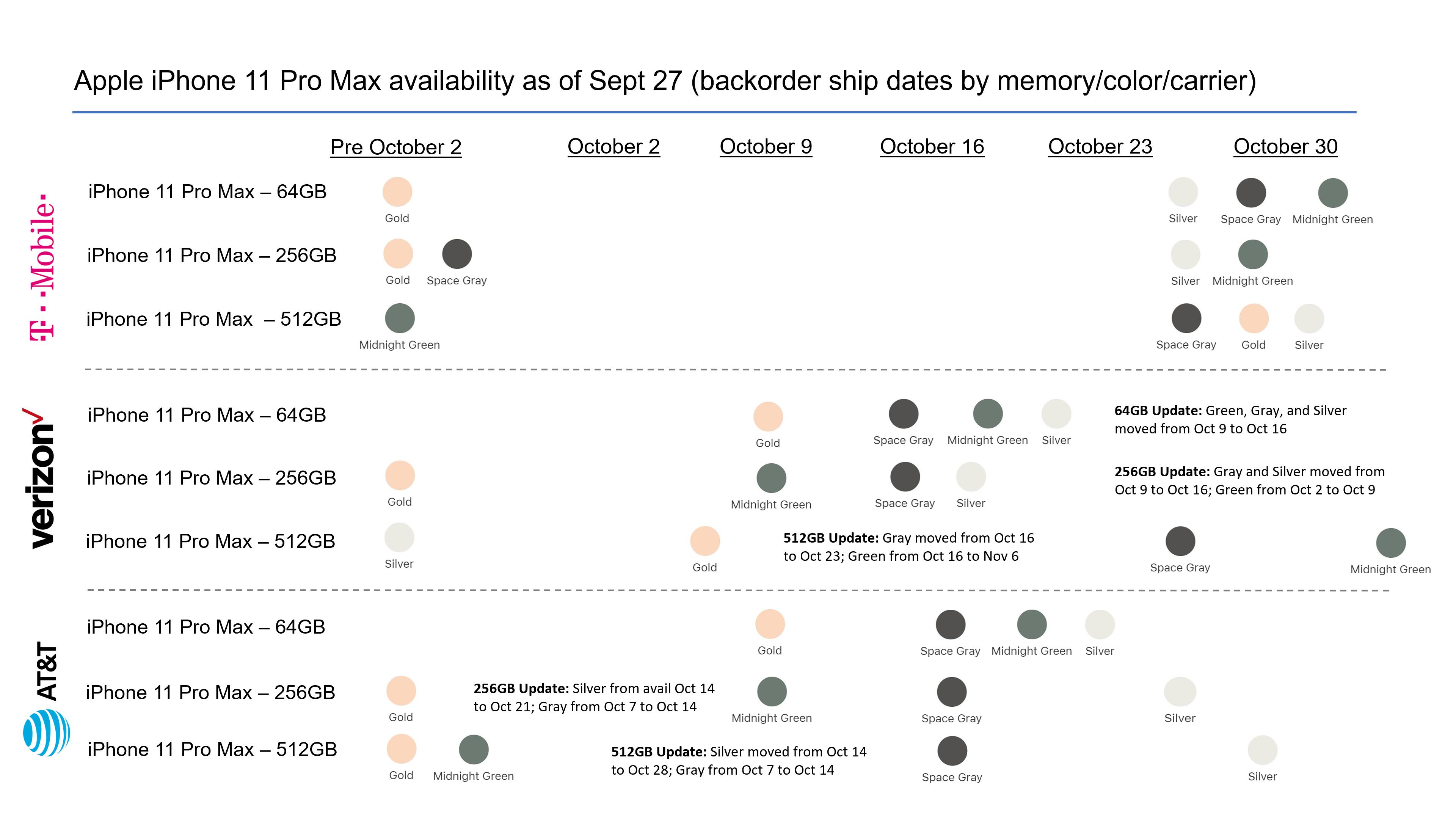 We will be updating this weekly in partnership with Wave7 Research.  Note: in-store inventory levels will differ from online availability.

Next week, we will cover several investments being made in the VC/start-up world that have the potential to influence the telecommunications landscape.  Until then, if you have friends who would like to be on the email distribution, please have them send an email to sundaybrief@gmail.com and we will include them on the list.