Greetings from Seattle and Dallas.  This week, T-Mobile announced second quarter earnings, which will be the entire focus of this week’s column.  Let’s face it, T-Mobile had plenty of excuses for a dismal quarter:  Smaller network footprint that is in transition, merger integration activity, competitive pressures, and a fragile economy.  Had they come close to consensus numbers, they would probably have been given a hall pass, and analysts would begin to pontificate about “What if they had ______’s margins?”  or “What if they had ________’s share of gross additions?”  The number four player would have received a community head pat, and we would be back to focusing on Project VIP, CBS vs. Time Warner Cable, cable consolidation in general, and Blackberry’s privatization rumors.

However, there was no whining about the slow growth economy on the T-Mobile earnings call (given the similar importance of low-income wireless plan assistance to other carriers, this could have been a factor).  No mention of the words “pardon” and “dust” in the same sentence (or “recapture” for that matter).  No use of lagging LTE network deployments as a reason for customer hesitancy or gross add weakness.   And, most importantly, there was no mention of “synergy initiatives” as an excuse for missed profitability expectations.  It was an unbelievable quarter as T-Mobile bested the rest of the industry in net postpaid phone additions.

In the Sunday Brief second quarter earnings preview (read full text here), we closed out the section on T-Mobile by stating:

In my wildest dreams, I would never have expected 1.1 million customer additions, with 688K of these being postpaid subscribers.  And 1.6% postpaid churn is truly an unbelievable number.  Braxton Carter, T-Mobile’s CFO, cited the dramatically lower churn as a significant driver of profitability in the quarter (meaning that cash flow from existing customers helped to buffet the impact of significant gross additions).

Without a doubt, there is some channel overlap between Metro PCS and T-Mobile, just as there is between Virgin Mobile USA and Sprint, and Straight Talk and Verizon Wireless (especially as Verizon Wireless increases their wholesale business with Walmart).  T-Mobile laid out a compelling case that explains why this is “frictional” or “edge” churn even as MetroPCS expands markets in 2013.  It’s still a source of long-term friction, but it’s a sideshow to the story of postpaid market share additions.

T-Mobile added 688K postpaid customers in 2Q 2013.  This barely gets them back to the level they were at one year ago (see chart below).  As many in the industry and analyst communities have argued, this represents a “return” to T-Mobile from AT&T and Sprint (two years ago, the fate of the T-Mobile network was uncertain and customers were leaving to go to the “surviving” AT&T network or to try the Wi-Max experience at Sprint).  T-Mobile’s voice and text capacity was originally designed for 26-28 million postpaid customers.  Sure, there are a many more wholesale/ MVNO users, but there is still  room to grow several hundred thousand more per quarter. 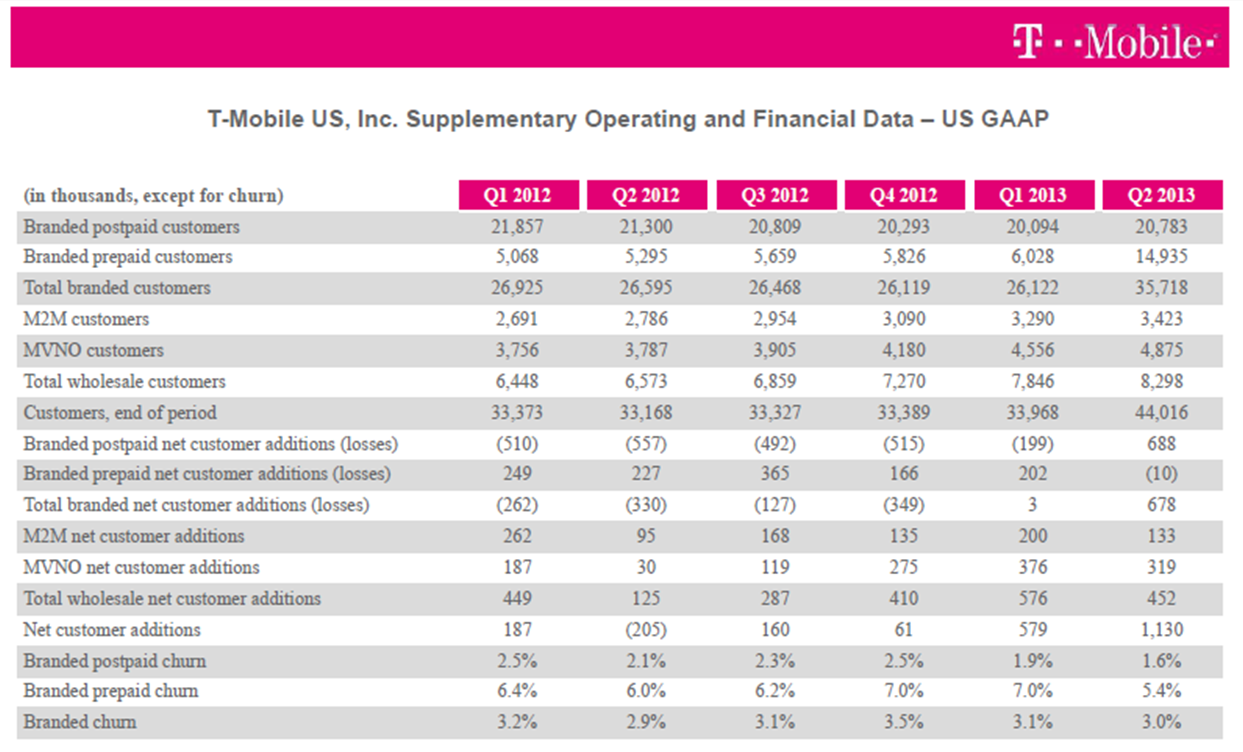 The amount of recovery required for T-Mobile in postpaid is immense. At the end of 2008, when the iPhone was still exclusive to AT&T, Google Android did not exist, and the Sidekick was the rage, T-Mobile had 26.806 million branded postpaid customers (and was generating $1.4-1.6 billion in EBITDA per quarter).  T-Mobile would have to have nine consecutive quarters like 2Q 2013 to get back to end of 2008 levels.  It’s possible, but that’s how much the postpaid asset has atrophied.  Muscle tone does not appear overnight. 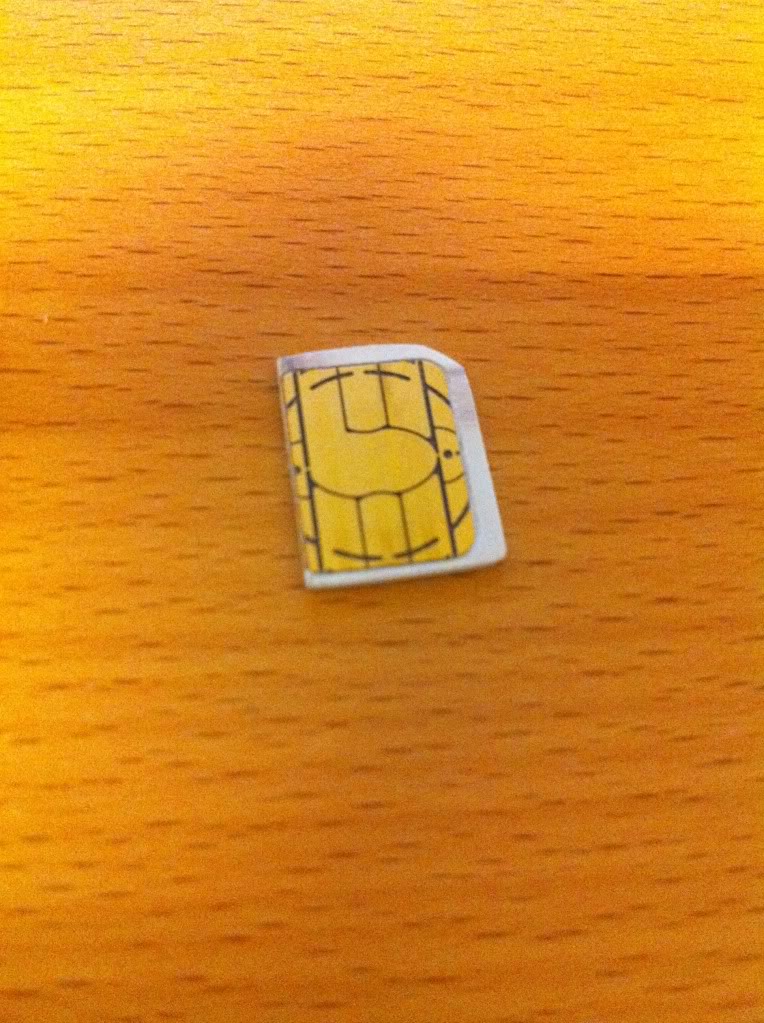 T-Mobile’s road to recovery is a lot easier to achieve, however, than Sprint’s.  As cited on three previous earnings conference calls, there are many AT&T iPhone users who are switching to T-Mobile because similar GSM technologies make it an easier proposition.  The process, called a SIM card swap, enables customers to switch from AT&T to T-Mobile for $10 or less. T-Mobile is continuing to upgrade their network so that iPhone network switchers will be able to use T-Mobile’s HSPA 21, HSPA 42, or LTE networks. Ease of use and resulting positive customer experience is not available everywhere, but for about half of the population, it’s an alternative.  More on SIM card availability from T-Mobile’s site.  SIM card swaps are only one competitive weapon against AT&T today; with the rise of LTE as a primary technology over the next several years, the conversion universe will grow.

However, SIM card swaps are only part of the competitive equation.  T-Mobile and MetroPCS have strong control over their retail operations and dealers, which makes device launches much easier.  This is great news for Samsung, Apple, LG, Blackberry, and other device manufacturers.  With the anticipated announcement of the next iPhone expected on September 10 (see article here), having a solid in-store customer experience is critical to T-Mobile’s success.

T-Mobile went to great lengths to emphasize the importance of a balanced handset lineup.  The “zero down” promotion T-Mobile is running this summer has been very helpful to Samsung and other Android device manufacturers, but, as I learned from my T-Mobile store visit this week, “zero down” does not apply to iPhone4S ($70 down, $20/ mo.) and iPhone5 ($143 down, $21/ mo.) models.  Absent brand loyalty, Samsung will win this battle all summer ($0 down, $25/ mo. for Galaxy S4; $0 down, $26/ mo. for Galaxy Note II).

It’s important to remember (and I saw from this week’s experience) that T-Mobile brought Blackberry to the masses through their company-owned stores.  When AT&T was the exclusive iPhone provider in the US, T-Mobile (and, for that matter, MetroPCS) went out of their way to feature and promote Android.  Their allegiance to multi-brand, while not quite as vivid as AT&T’s (as they market the heck out of the 41 MexaPixel Nokia Lumia 1020), is much more apparent than Verizon’s or Sprint’s.  Their store reps are excited to have the iPhone for competitive parity, but I found the rep I worked with this week to be very knowledgeable on Blackberry, HTC and Samsung.  (Granted, I was in Seattle when I performed my test, but it was a ways from the T-Mobile HQ in Bellevue). 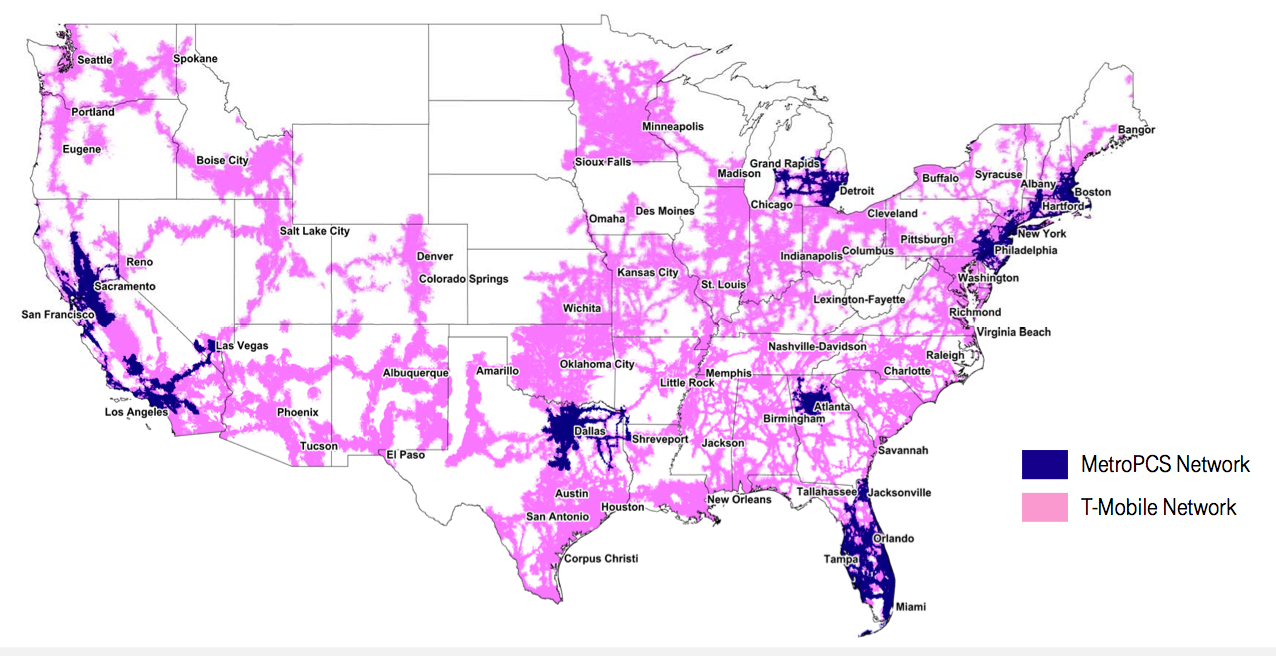 Strong direct distribution control, multi-brand experience, and SIM Card swaps.  What could make the picture even brighter?  The answer lies with network and engineering efficiency.  Excluding roaming, T-Mobile operates at the 1900 Megahertz (a.k.a. the PCS band) and the 1700 MHz (a.k.a., the AWS band) frequencies.  They are currently in the process of moving HSPA+ (42 Mbps) to the 1900 MHz band so they can firmly establish the 1700 MHz band for LTE services (T-Mobile purchased a large amount of the 1700 MHz band from Verizon Wireless through an auction process, and is completing the purchase of 1700 MHz spectrum from US Cellular for the Mississippi Valley region).  Recently, T-Mobile announced that they will deploy 10×10 MHz of spectrum in 90 percent of the top 25 markets by the end of 2013.

This sounds great for three reasons.  First, customers are going to expect current networks when they purchase the latest smartphones from T-Mobile.  Second, it will undoubtedly drive up ARPU for some T-Mobile users.  Finally, availability of more efficient networks drives up profitability.  If half of all current smartphone users on the T-Mobile network were using HSPA42 or LTE as their primary network with the same volumes, T-Mobile’s overall gross margin would increase by at least 300 basis points (3%; calculation available upon request).  Like Sprint, T-Mobile’s fortune’s rise and fall by the depth (and, by 2015, the breadth) of their network.  While Sprint has the advantage of deploying some additional service over the newly available (800 MHz) iDEN spectrum, it’s a smaller 5×5 MHz block.

Are there headwinds?  Sure.  T-Mobile needs an in-building strategy, one that is cognizant of the fact that every floor in every building in the US (likely) has a T-Mobile Bring Your Own Data (BYOD) customer.  If Verizon, AT&T, and Sprint meet the in-building needs of these customers, and T-Mobile does not, they become sitting ducks.

Frankly, T-Mobile needs an entire business strategy, one that brings radical change in offerings and services to the CIO suite (and, frankly, one that fuses IP backbones with M2M endpoints).  They can only do this by reaching back to the Ethernet and fiber communities that desperately want to join the Seattle revolution.

When T-Mobile starts to think about their wireless network as the medium and enterprise business primary means of communication (and information retrieval), they will understand the tens of billions of value they can create.  Start with the 70,000 buildings that are already on-net and served by someone other than Sprint, Verizon Enterprise Solutions, and AT&T.  There’re several million T-Mobile customers wishing for better service there today.  Use that building footprint to launch an even more creative solution.

That’s all we have time for this week.  There’s a lot to cover in next week’s SB as we have not delved into wireline earnings results.  Until then, please vote for eTrak in the WalMart “Get On The Shelf” contest (you need to be logged into Facebook to register your vote), and have your friends join you as well.

Speaking of your friends, many of you have been busy.  Last week we added 59 new SB followers and several more decided to receive updates through WordPress.  Thanks for passing it on.  If you have friends who would like to be added to this email blog, please have them drop a quick note to sundaybrief@gmail.com and we’ll add them to the following week’s issue.  Have a terrific week