T-Mobile’s Triple Offer – Is Anything Good Enough for the Attorneys General?

Veterans Day greetings from Mooresville, NC, where the community came together to remember all who serve and run an obstacle-based 5K race.  Pictured is the race logo.  Great seeing such a large turnout!

This week, we will look at earnings announcements from Sprint, Altice, CenturyLink, Frontier, and Cincinnati Bell.  There are also several TSB follow-ups from the previous two weeks that we will briefly mention.  As they come available the Apple inventory slides will continue to be posted directly to www.sundaybrief.com.  Here is a link to last week’s analysis.

T-Mobile’s Triple Offer – Is Anything Good Enough for the Attorneys General?

On Thursday, T-Mobile hosted a call to publicly offer solutions to their private conversations with many of the attorneys general who are suing to block the merger with Sprint.  Their solution focused on three components:

As an aside, one of T-Mobile’s largest MVNOs, Mint Mobile, is running a $15 special right now which includes unlimited talk/ text and 12GB/ month of data.  Customers need to pay for 3 months in advance.  All Gigabytes are Hotspot eligible, data is not deprioritized and video is not optimized, although users can activate optimization through the self-care portal.  The standard price for this service for customers who pay for an entire year up front is $25/ month.

The bottom line here is that T-Mobile’s lower prices are currently being offered by larger carriers in the market and bolster the argument that opportunities for data capped plans to affordably serve a large portion of the population exist.  The irony of this offer is that it will likely increase the market share of the new T-Mobile in the metropolitan areas highlighted in the AG Complaint (New York and Los Angeles) and bolster the extremely weak argument that T-Mobile would be too dominant in Verizon and AT&T’s two largest broadband territories.

The question posed in this section’s title is the most relevant for the telecom community.  Free service to first responders for ten years, 200 Gigabytes of service to eradicate the Homework Gap, and $9.99 unlimited talk and text + 2 GB offerings would likely not suffice.  Bottom line:  T-Mobile needed to demonstrate good faith, and they have.  A judge will clearly see this.  The Attorneys General, however, have higher priorities that pertain to competitive structural changes.  They are using Europe as their blueprint and want to enable solutions that will force would-be MVNOs beyond Dish networks to use T-Mobile as a “network of many.”  While everything proposed benefits the Magenta brand, the AGs are looking for competitive solutions that enable new brands.  That’s why we are at a stalemate, and why this case will likely go to trial on December 9 (for more reading on one white paper that’s likely driving the AG decisions, click here).

The T-Mobile/ Sprint Deal Has Expired – Now What?

During the conference call that occurred after the 5G For All announcement, David Sheperdson of Reuters asked the following (see minute 44/45 here): “Your merger agreement [with Sprint] expired on Friday night.  Is there any consideration by T-Mobile to renegotiate the terms of the deal or seek a lower price for Sprint?”

There’s been a lot of misunderstanding about that, and I’ll clarify a few points…  So the Business Combination Arrangement (BCA) had something in it called the Long Stop Date, and it was a point which was 18 months in, November 1st.  It didn’t stop the partnership or the moving forward of the Business Combination Arrangement… That was the date after which either party had a unilateral right to walk away from the deal.  Now it’s sort of like going month-to-month on your rent – there’s no more lease – you continue to move forward as we do with great partners, but if you are going to extend it to another date, you need to take action and amend the BCA… We are having discussions as partners about whether and how long we move forward the date, and I would say that in a period where we are full together moving forward to get this deal approved, and what if any items, should be agreed between the parties in exchange for agreeing to those terms.  So yes, we are having conversations and discussions, but to be clear, the Business Combination Arrangement is moving forward 100% and how to set a new Long Stop Date and what those terms would be.

Mr. Sheperdson had a follow-up: “Would that include renegotiating the price.. the valuation?”

I’m not going to get into the actual terms but the question is ‘OK, Nov 1st came and went, and if we need a certain amount of time to lock each other into a date, what are the things that are important to each of us?’ They can be value, they can be how do you handle things that have happened that possibly need to be indemnified, how do you agree on future things that you will share in order to settle the deal, etc.  So it’s a broad array of things, very partnership oriented, and as soon as we have the light of day on that, it shouldn’t be too far out in the future, but it’s a positive conversation and it could include any of the things that you’re talking about.”

One need only look at Sprint’s recent earnings results to discover where T-Mobile could head beyond the share exchange ratio (which, per the original announcement is 0.10256 T-Mobile shares for each Sprint share – note, if the merger were to have closed last Friday, that ratio would have yielded a value $8.32 or about 38% higher than current market price). 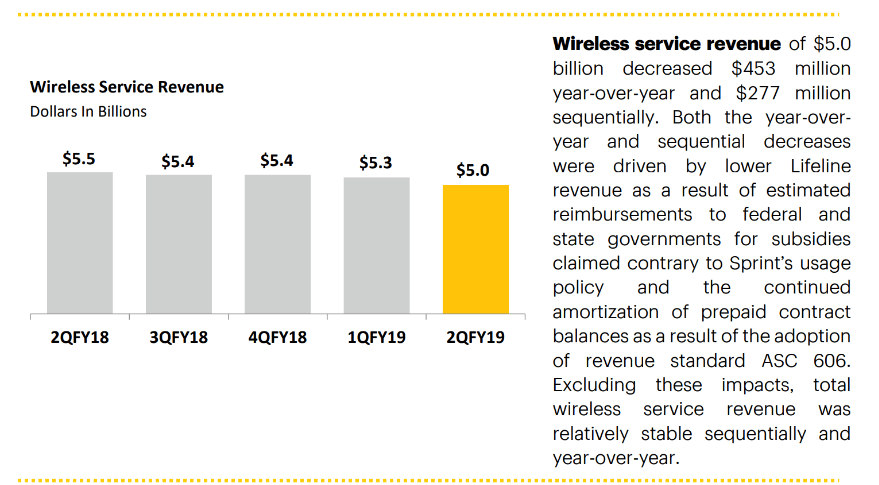 Sprint’s earnings results were impacted by a Lifeline wireless revenue impact (which was not quantified in the earnings release, other than a comment that revenue would have been “relatively stable” on a sequential and year-over-year basis without the item).  Given the drop in wireless service revenues of over $300 million, there’s probably more to the equation than just the 885,000 customers the FCC accuses Sprint of erroneously billing.  Rather, it appears to be some sort of true-up (likely in the $150-250 million range).

Telecom analyst Craig Moffett calculated that if the FCC fined Sprint the maximum amount ($5,000/ customer) for each of the 885,000 incorrectly requested reimbursements, the amount of total liability would approach $4.5 billion.  Bottom line:  It is very likely that T-Mobile and Sprint will be setting up an escrow for some or all of the estimated balance.  With Softbank owning nearly 85% of the total shares, the only question becomes whether the Japanese communications giant will bear the entirety of the escrow or if all Sprint shareholders will be subject to the provision. 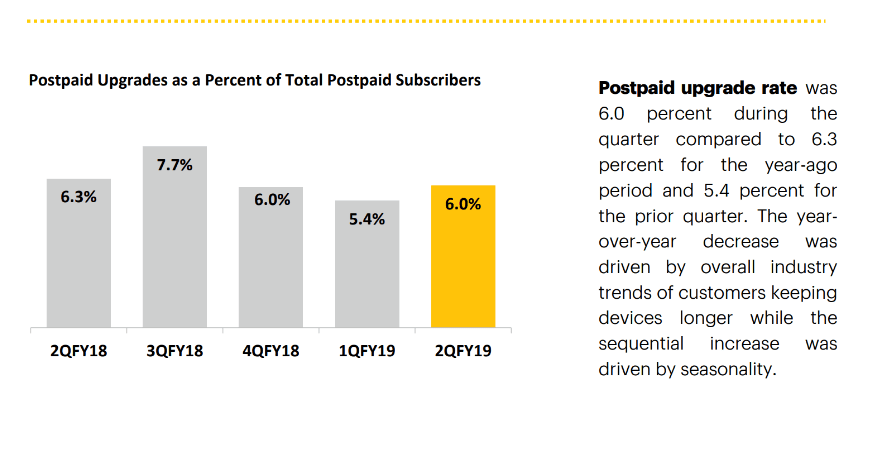 Secondly, Sprint saw a seasonally driven sequential increase in the number of customers upgrading their devices in the recent quarter (see nearby chart).  This likely has more to do with 5G device availability and promotion and potentially Apple upgrades (although other analysts have indicated that Apple iPhone 11 availability was no better/worse at Sprint than what we documented at T-Mobile, Verizon or AT&T).   Sprint enjoys a higher postpaid upgrade % than their merger partner (25% upgraded over the last four quarter versus 21% for T-Mobile).

With an abundance of non-5G leased devices (the Apple iPhone 11 product line being the recent promotion), how should Sprint be accounting for the residual value?  Sprint indicated that more expensive devices are being leased versus the same period in 2018 (makes sense given 5G phone interest), but they also assume lower equipment depreciation based on “evaluation of device residual values.”  What this says is that first generation 5G devices will hold their value more than initially estimated (Samsung Note10 and S10 5G) and that the glut of iPhone 11 devices that will be created by the upcoming 5G version of the iPhone will not place a material downward pressure on residual values (e.g., a home will be found for these devices at the estimated market prices).  This is an area worth further scrutiny, not for Sprint alone, but in comparison to T-Mobile’s conservative (JUMP! On Demand) assumptions.  Bottom line:  there could be another escrow created for leased device residual value in light of increased 5G device proliferation. 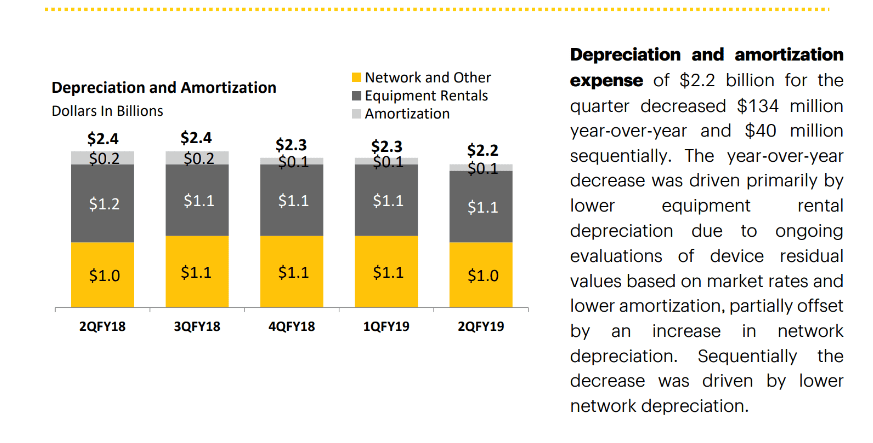 Overall, unless T-Mobile was assuming that Sprint would create free cash flow (versus break-even levels) as merger approval dragged on, there’s probably little opportunity to reset the share exchange level.  After all, T-Mobile is getting the benefit of increased roaming expenses from their merger partner which was cited as one of the reasons for Sprint’s increased Cost of Revenue (CoR).  But there could be escrows created to ensure that the revenue quality translates into expected customer lifetime values, which are challenged by Sprint’s high (and expected to be higher) postpaid churn rate.

There’s a metamorphosis occurring with smaller regional local exchange providers, and the thesis goes as follows: 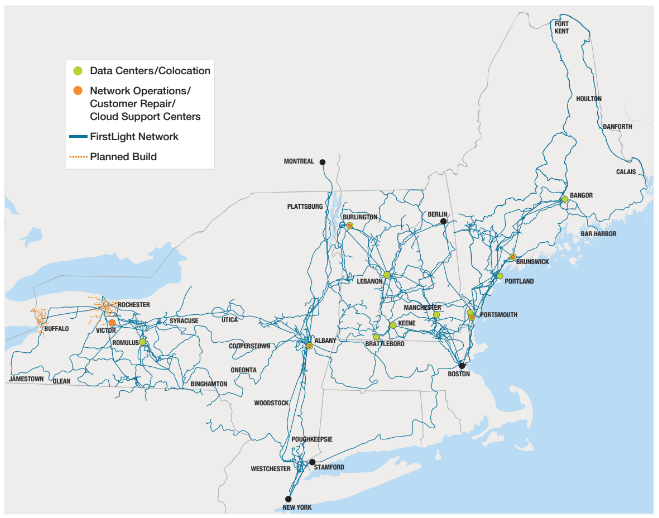 This is not to say that the ILEC is back, but it does indicate that they (with perhaps Frontier as the exception) are not going to go down without a fight.  It also highlights how company size can impact strategic priorities.  When was the last time Verizon spoke glowingly about the prospects for their upstate New York properties (and, how could Firstlight accomplish a 15,000 route mile fiber buildout, on a far lesser budget, than Verizon)?  See nearby map and here for more details.

The ILECs face many financial challenges – one is currently in bankruptcy while another one is being urged to file for protection.  All of them have eliminated or significantly cut their dividends and experienced the associated reduction in stock price.  None of the four seem to have a plan to defeat cable, particularly in the SMB segment.  All of them are focused, however, and that’s the critical first step to recovery.  Reclustering of the local exchange properties, as we have written about previously, is the key to success.  And that reclustering includes AT&T.

Dish announced two senior leaders for their MVNO this week.  Both Stephen Bye (Chief Commercial Officer) and Marc Rouanne (Chief Network Officer) will have their hands full over the next several months.  Stephen brings a unique set of experiences, having been a part of both the Sprint/cable JV called Pivot, as well as the leader of the Cox MVNO that used Sprint.  Bye was also the Chief Technology Officer at Sprint and at C-Spire.  Rouanne has equally robust experience especially with Open RAN environments.  This is an encouraging sign on many fronts, and we look forward to seeing tangible evidence that Dish is committed to a nationwide operation.

A recent article here outlines the total credit limit allocated by Goldman Sachs for the Apple Card ($10 billion through September 30).  This would imply approximately 2 million customers (at an average of $5,000 credit per customer).  Apple has not publicly commented on subscribers or the average credit limit but we believe that our 2 million number is accurate and that they will double this base to 4 million customers by the end of the year.

Lastly, in a previous TSB, we highlighted the work of Helium, a Silicon Valley-based startup that is using the 900 MHz spectrum band to track all sorts of low-bandwidth devices.  They recently tweeted that they had 1,000 active Helium devices across the country – not bad for the first couple of months.  More on the company can be found here.

That’s it for this week.  As mentioned earlier, we will be posting the latest Apple inventory charts to www.sundaybrief.com in the next day or so.  Next week, we will discuss the latest developments in Open RAN unless there is other breaking news (perhaps related to the T-Mobile/ Sprint merger).  Until then, if you have friends who would like to be on the email distribution, please have them send an email to sundaybrief@gmail.com and we will include them on the list.