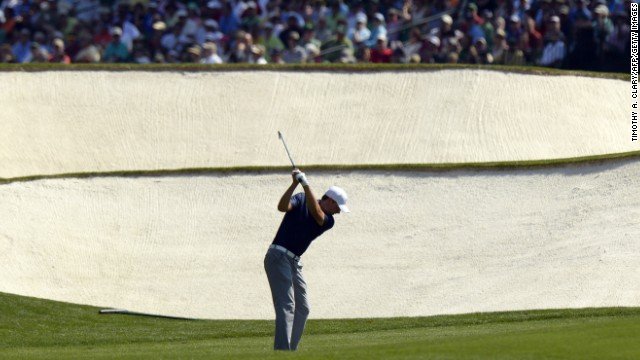 Greetings from Philadelphia and Dallas.  For those of you who share a strong interest in the outcome of the Masters golf tournament, all eyes will be on 20-year old sensation Jordan Spieth today as he goes for his first green jacket.  Jordan is a graduate of Jesuit College Prep here in Dallas where my son, Jimmy, currently attends.  We’ll be cheering extra hard for you, Jordan!

As a quick reminder, we will take a one week hiatus from The Sunday Brief on April 20 and  return with a full analysis of first quarter earnings on April 27.  If something notable in Google’s April 16 earnings call occurs, we’ll post our analysis on www.sundaybrief.com and cover in the April 27 earnings release.  I will also be posting some thoughts on smartwatches on the website as well (the events of the past two weeks do not allow enough space to cover the topic in 500-word chunks).  Based on a quick glance at the earnings calendar (April 22 = AT&T and Comcast; April 23 = Apple; April 24 = Amazon, Microsoft, Time Warner Cable, Verizon), there will be plenty to talk about in two weeks.

To recap a couple of themes that we have discussed since the beginning of the year, first quarter earnings are going to highlight a) the disruptor role of T-Mobile in the wireless marketplace (leading to healthy gross and net additions for them, as well as for AT&T, but weaker additions for Verizon and Sprint); b) improvements in the economy, but particularly in the housing sector (and particularly in the Southeast and Midwest) driving additional broadband speeds and penetration; and c) continued low interest rates fostering additional consolidation/ acquisition from companies who are generating cash.

I remember when T-Mobile released their Simple Choice pricing plans last March.  My first thought was “brilliant” – they were going to separate the smartphone subsidy from rate plan pricing.  “Zero down” made sense and was a terrific acquistion tool for T-Mobile (re: the iPhone launched on T-Mobile one year ago this weekend).  Within a year, every other carrier followed T-Mobile’s pricing model.  In fact, when I was upgrading to a Sprint Spark-enabled Samsung Galaxy S5 on Friday, the in-store displays only showed the monthly payment price (no subsidized prices are shown).

This week, T-Mobile introduced two new initiatives.  The first should come as no surprise if you have followed The Sunday Brief over the past two months:  the Simple Starter plan offers unlimited voice, text, and unlimited data for $40/ month.  The first 500MB are on T-Mobile’s LTE network, and the remainder on T-Mobile’s 2G network or consumers can purchase a day ($5) or week ($10) pass until their month expires.  It’s a welcome change to overage charges, but T-Mobile would benefit from an even simpler change:  a 5GB “overage protection bank” that users can draw from that would cover the occasional overages customers face. 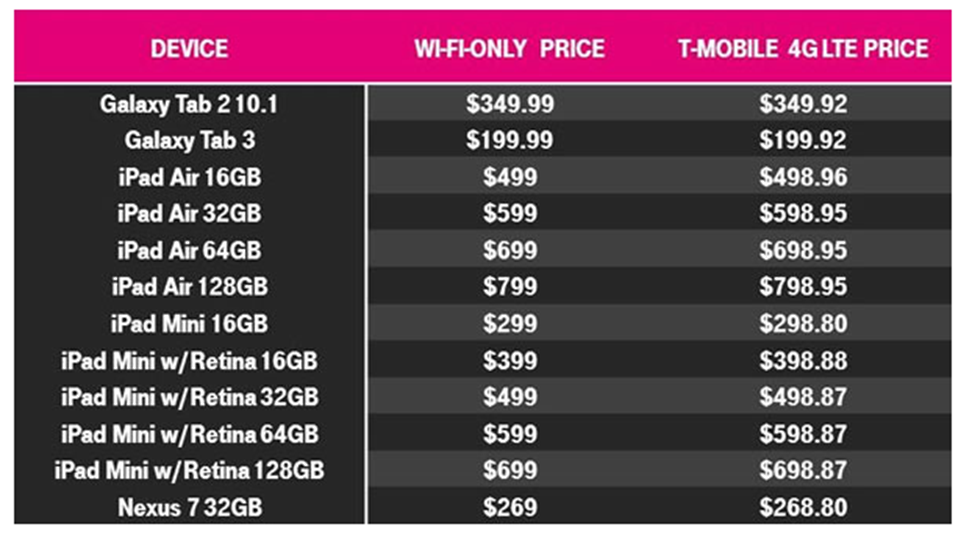 While Simple Starter is a good change, the real news was on tablet pricing and plans.  On Friday, T-Mobile launched Operation Tablet Freedom, which entitles current postpaid customers to purchase a T-Mobile network-enabled tablet for the same price as the Wi-Fi capable version.  To prove it, T-Mobile posted the pricing of the two versions in their press release.  In addition to this, T-Mobile also included 1GB of additional data (200MB is the standard package) in all plans through the end of the year.  See more here in their press release.

The “Qualcomm tax” effect (Qualcomm 3G chipset pricing drove the first Wi-Fi to carrier-radio pricing) has plagued the telecom industry since the rollout of the iPad.  Carriers struggled with subsidizing the $100-130 difference for years.  Like international minute pricing and global roaming, tablet pricing differentials were simply a “that’s just the way it is” phenomenon. T-Mobile’s removal of the difference and tying it to a bundled offer to current postpaid customers is a master stroke.  I clealry expect Verizon and AT&T to follow suit by summer.

This is unbelievably good news for tablet makers such as Samsung, Microsoft, and Apple.  Because the tablet now “works everywhere” it blends the functionality of a smartphone into the bigger screen of an iPad or a Galaxy Tab.  To consumers, the question now becomes “If I am going to own a tablet, why not have the capability to use the tablet at faster speeds in more places?”  This will (eventually) flip the ratio of carrier radio-equipped to Wi-Fi only tablets sold from the current 15%/85% to 90%/10%.  Ironically, the Qualcomm tax will result in more Qualcomm radios being put into tablets and ultimately more Qualcomm profits.

On top of this, T-Mobile will be able to use their data network as a means to attract Verizon and AT&T customers to their network (presumably, the previous tablet plan did that, but with limited success).  With recent strong Rootmetrics finishes for speed (but no strong finishes for reliability), a combined Wi-Fi (indoor) and T-Mobile (outdoor) offering might tip enough people to ask “Why not?” and give Magenta a try.

More on T-Mobile when they announce earnings.  Operation Tablet Freedom means a lot more to T-Mobile gross additions than analysts originally estimated.  With AT&T (and Amazon) likely following suit, it could have significant ramifications to data growth.  If only Day 3 (scheduled for April 14) could involve something with the Cable Wi-Fi initiative…

Speaking of cable, earlier this week there was a Senate Judiciary Committee hearing on the proposed Comcast/ Time Warner Cable merger.  Featured in the testimony was David Cohen, Comcast’s EVP who also is well known for his fundraising ties to the Obama administration (not to mention his early political experience as Chief of Staff for Philadelphia mayor and later Governor Ed Rendell).  The full testimony from  Comcast and Time Warner Cable can be found here and the CSPAN video of the testimony can be found here.

Cohen reiterated the scale and innovation benefits of the merger.  Senator Leahy then asked him to clarify his previous statements that “cable rates will not go down.”  In an apparent swipe to politicians’ ability to tell the truth, Cohen responsed “I have a nasty little habit of telling the truth, and when I was asked ‘Are people’s cable bills going to go down?’ I said I can’t make that commitment.  But between the synergies in this deal, and whatever marginal additional leverage we might have in programming and equipment supply purchasing… will ultimately inure to the benefit of the consumers.  And, let’s face it, consumers today are in the driver’s seat.”  Cohen 1, Leahy 0.

Comcast then went on to frame this merger in light of the revenue and market capitalization of Internet giants such as Apple, AT&T, Verizon, Google, Amazon, and Facebook.  They argued the following:

New digital platform providers, with their roots in software and hardware, are using the robust Internet connectivity provided by Comcast, TWC, and our competitors to grow into global powerhouses.  These companies are increasingly pursuing new businesses that compete with ours.  As one industry expert has observed, “broadband connectivity is the glue that permits multiple firms, once walled off from one another in distinct product-market categories, to compete, cooperate, buy, and supply products and services from one another in order to satisfy customers that are able to buy from any one of them.”

Senators, however, stuck to more traditional definitions of the cable industry, questioning the rate of cable (video and Internet) bills as well as their poor quality of service.  Cohen called the continued reminder of their poor service a “kick in the butt” for which Senator Al Franken responded “you’re welcome.” 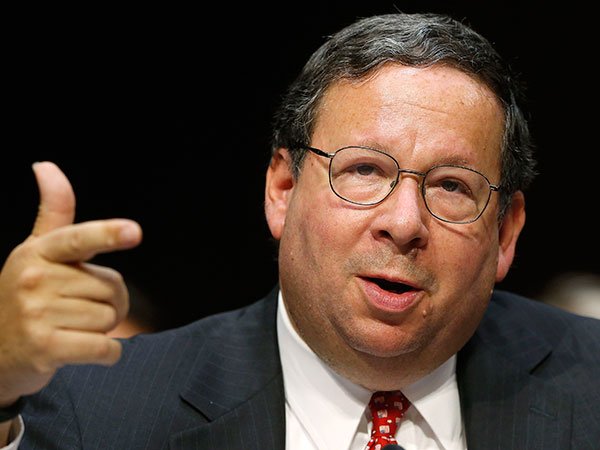 Bottom line:  There was a lot of hype leading up to the testimony, but nothing new came out of the hearing.  As we have stated previously, there is no current body of regulation that would cause either the DOJ or the FCC to reject the merger, especially given Comcast’s willlingness to divest three million lines (or about 27% of the lines they are acquiring).  This does not eliminate the chances, however, of the DOJ or FCC creating a “too big to merge” precedent, and/or requiring that the combined entity take new steps to unbundle access from content.

If the DOJ and FCC tread lightly, expect continued consolidation and/or cooperation in the broadband industry, perhaps combining FiOS and U-Verse into a single entity (or FiOS in an out of region play with Google Fiber). The precedent will have been established, and, with low costs of capital, the opportunity to establish new levels of scale will be achievable with minimal regulatory scrutiny.

As noted above, we’ll take a break next week, but if you have friends who would like to be added to The Sunday Brief, please have them drop a quick note to sundaybrief@gmail.com and we’ll subscribe them as soon as we can (and they can go to www.sundaybrief.com for the full archive).