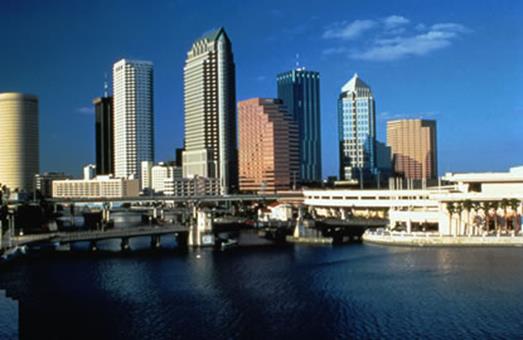 Greetings from Dallas, Sarasota, and Tampa/ St. Petersburg, Florida.  It’s been a very interesting week in telecom, and, as approvals are completed or underway for two large transactions, it’s worth spending some time recapping activity and looking ahead to the strategic implications.

“To sweeten or not to sweeten?” was the question this week as analysts and reporters focused on comments made by Deutsche Telekom (DT) management last Thursday regarding the proposed T-Mobile USA merger.  In this case, the sweetening value would likely come from debt and/or interest rate reductions with respect to $15 billion of notes the parent is going to fund for the combined company.

As is carefully outlined in the proposed merger agreement filing (see around pages 83-85 in the link), DT’s commitment to backstop a large portion of the debt was an important negotiation point.  Many proposals outlining third-party debt financing were exchanged during the months leading up to the October 3 merger announcement.  Any reduction in debt and interest rate is likely to be accompanied by changes to the equity structure (likely more equity, which means more dilution of the MetroPCS shareholder).  Given the multiple, complex facets of this deal, it’s likely that DT settles for mere tweaks rather than a fundamental restructure.

Operationally, this merger cannot come soon enough.  Those who are opposed the current merger structure ignore the dire straits of Metro PCS (see first quarter 2012 earnings here) as well as the competitive intensity that will be unleashed by others in the marketplace during the remainder of 2013 (see the column entitled “Verizon’s Transition Advantage” here). 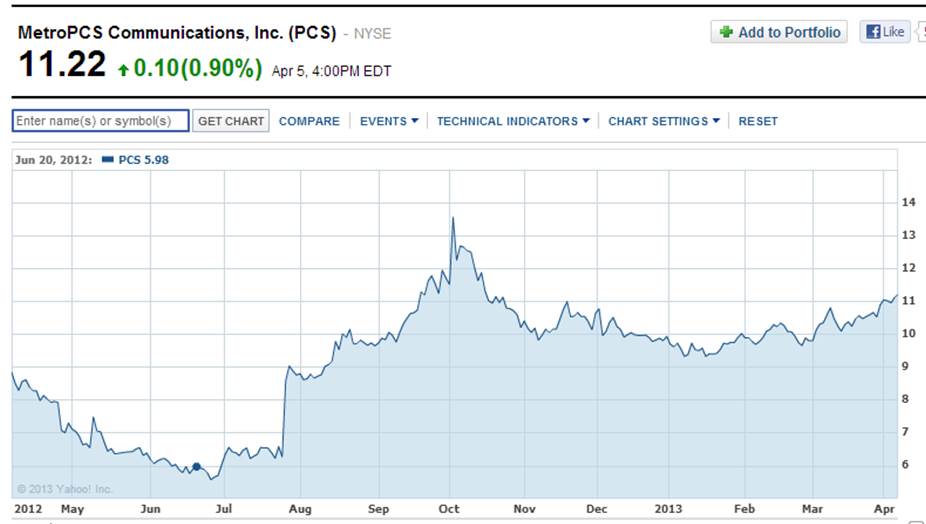 Absent a counteroffer, why wouldn’t MetroPCS descend to $6-7/ share (see chart)?  Has the no-contract market magically turned into a profit machine (see Leap’s and Sprint’s earnings for the answer)?  Has the ability to obtain LTE roaming agreements from Verizon Wireless emerged, changing out-of-region economics and potentially opening up new addressable markets?  Has subscriber growth ceased to become an objective for any of the other wireless players in MetroPCS markets?

All of this strategizing culminates in a shareholder vote next Friday.  The only certainty is that the drumbeat for some changes will crescendo through April 12.  In case you forgot, April 12 is also the day T-Mobile releases the iPhone in stores (pre-orders started on April 5).

The strategic implications of the combined T-Mobile/ MetroPCS deal are enormous, not only to Sprint, but to the rest of the wireless industry.  Value-conscious buyers (and families) will have similar choices to those offered by AT&T, Verizon Wireless, and Sprint across a network that, while not quite as large and robust, will be worth the price difference.  This value proposition will extend not only into the family, but into small businesses as well.  Here is the visual of the T-Mobile current family offer:

For $100/ month, two lines with 2.5 GB each is a bargain, especially if you are bringing your own devices and you anticipate equal usage between phones (more than 500MB from the parents, and less than 2.5 GB from the teenagers on the plan).  That number is comparable to $150-160/ month on Verizon although sharing is less restricted by device.

Adding in the smartphone “pay by the month” option is what narrows the gap.  An iPhone5 at T-Mobile runs $99 (16GB) + $20/ month per device.  Adding in $40/ month for two lines and the gap narrows considerably ($140/ month vs. $150-160/ month at Verizon).  Every dollar of savings matters in this economy, and in the T-Mobile plan customers need to shell out $200 less up front for the iPhone5, but to lure entire families away from Verizon (or AT&T), the gap needs to be more meaningful.  Once duplicated by one or more of their peers, the value of customers in their second year diminishes rapidly.

This is exactly the effect that T-Mobile hopes to create.  Weakening the value proposition for an AT&T or Verizon family plan (as the marketers put it, increasing the “most want to investigate” level) opens up an entirely new addressable market, or at least enough to add an additional 500K to 1 million customers per quarter.  The no-contract nature of T-Mobile’s plan structure allows new members of a family to be added without the burden to the entire family of an extended service term.

Increased subscriber growth resulting from plan attractiveness will result in continued network speed improvements.  Improving in-home and in-building coverage will be paramount over the next two years, and T-Mobile lacks a robust enterprise/ in-building strategy.  Frustrated by the inability to get an emergency call from their child’s school while in the office, I can see many Moms saying “It’s just not worth it.”  Coverage matters, and T-Mobile will need to invest in this coverage for the Bring Your Own Data (BYOD) users.  Sprint, Verizon, and AT&T have been in this game for nearly a decade, and are formidable competitors.  It’s the key to a sustaining a pricing plan change in metropolitan areas. 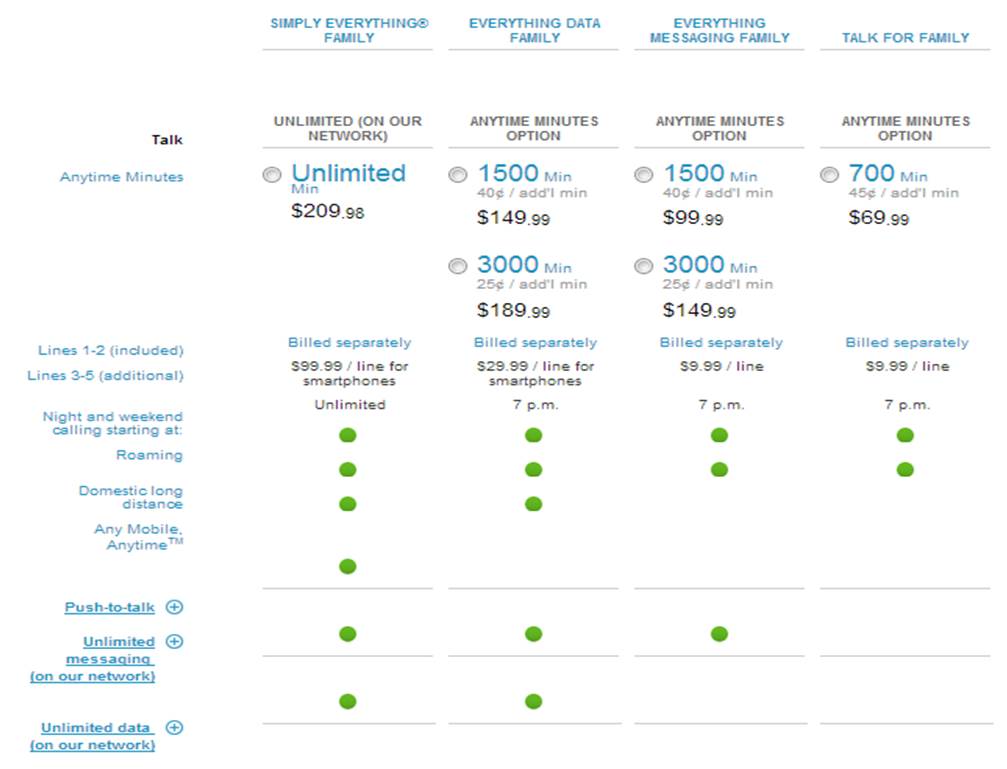 Comparing to T-Mobile’s plan structure above, which pricing plan will be easier for a Best Buy or a Wal-Mart employee to explain?  An $80 two person plan with 500MB of included data per line, or the nuanced 1500 vs. 3000 minute bucket option explanation?  Provided that network coverage is (nearly) equal, it’s going to be a tough day for Sprint absent price plan simplicity.  Sprint’s Simply Everything plan, which was revolutionary in 2008, is showing its age.

Let’s look at a 2-line conversion, both iPhone5 models, between Sprint and T-Mobile.  T-Mobile would cost $200 less at purchase ($100 difference per phone).  Let’s assume each device ordered the 2 GB option and that neither user did a lot of talking (1500 minute plan).  That would leave Sprint at $150/ month and T-Mobile at $140.

Today, a customer would receive $200 more in their pocket and $10 more in savings per month for new iPhone5 service.  This savings would only go up with additional members on the same plan ($10 per added member per month, provided that the family member did not use more than 2GB in T-Mobile data).

If T-Mobile’s pricing changes go answered in 2Q and 3Q, Sprint will begin their new Softbank life with a smaller customer base.  Early indications are that these changes are having a significant effect on T-Mobile subscriber losses (see T-Mobile’s Q1 announcement here).  Sprint needs to respond to T-Mobile firmly and decisively, not only with a network that is rock-solid, but also with pricing plans that make switching easier.  Simply put, Sprint’s Simply Everything plan needs a makeover for the new generation of smartphone users (and Wal Mart/ Best Buy salespeople).

Next week, we’ll recap the MetroPCS shareholder vote, and will comb through senior management presentations for hints of change at VZ and AT&T (both wireless and wireline).  As always, you can catch daily updates as well as the complete Sunday Brief archives at www.sundaybrief.com.

Thanks again for the many Sunday Brief referrals.  We added nearly 50 new readers in the past two weeks.  If you have friends who would like to be added to this email blog, please have them drop a quick note to sundaybrief@gmail.com and we’ll add them to the following week’s issue.  Have a terrific week!