Texas rugby greetings from Austin and Dallas.  After a bruising match, the Jesuit Rangers came up short yesterday against perennial state champion contender Westlake High School.  It’s a rough sport and fortunately injuries were minimal.  Kudos to the Jesuit Rugby coaching staff on a terrific 5-1 start to the season.

We set a record for new Sunday Brief sign-ups this month, with over 60 new emails added.  I appreciate the continued “word of mouth” support and comments on each column (I read and try to respond to most of them).

For your calendar: Roger Entner of Recon Analytics is going to be hosting a panel on Auction 97 and Title II reforms on Monday, March 9.  I’ll be participating on the panel along with some well-known names in the telecom industry.  Rather than steal Roger’s thunder, I’ll provide more details next week and on the www.sundaybrief.com website. Consider having a conference call “lunch” with me and a few other telecom thinkers two weeks from Monday.

One of the first charts Verizon shows is the price per MHz POP for this auction versus other auctions: 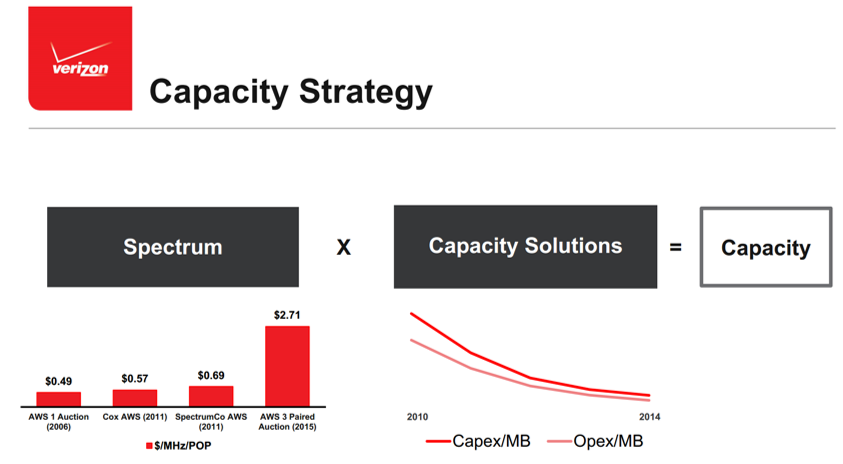 While the “headline” number of $44.9 billion of total bids is certainly an attention grabber, the relative cost of this spectrum compared to previous auctions is astounding (and, depending on the auction involved, the number and financial capabilities of the bidders were not dramatically different from Auction 97).

Spectrum obtained in this auction cost Verizon nearly 4x more than private spectrum purchases (SpectrumCo is the purchase from several cable companies in 2011) and over 5x more than the first AWS auction in 2006.  As a reminder, Verizon had $75.3 billion in license assets on the books as of 12/31/2014 which is likely more than the total net Property, Plant and Equipment deployed to make the spectrum commercially available (Verizon’s total wireline + wireless net PP&E is just shy of $90 billion).  Things were already getting expensive before Auction 97 – now what?

The answer to that came from Tony Malone on the conference call:

… certainly at a time where spectrum was at a certain price per megahertz POP, that was a very effective solution. As those prices increase, small cell technology, with the improvements there, just the balance of the comparison between the two changed dramatically

This is the raw truth – if you have contiguous spectrum (a hallmark of Verizon’s purchases to date), the ability to add additional capacity through small cells becomes a financially better solution for the shareholder at some point.  Said another way, small cell architectures become a more viable alternative if they can be introduced nationally.

Verizon has the capability to do this, and, as discussed on the conference call, already has some metro deployments underway (including a 400-node deployment in Boston).  This is good news for small cell and fiber providers who have been working with Verizon for several years.

Verizon also showed their new map of spectrum holdings before and after the auction:

It’s very clear that Verizon’s strategy was to nationalize their total holdings.   Generally, they achieved it (46 of the top 50 markets with more than 40 MHz of AWS spectrum), but there are going to be areas where mid-band (1900 MHz) is going to need to be repurposed quickly (or densification needs to happen quickly):  Chicago, South Florida, Oklahoma, Kentucky, West Virginia and South Texas did not improve holdings significantly.  Fortunately, there are good fiber partners in most of these locations.

In more rural markets, there are US Cellular (Kansas, Iowa, Oklahoma, Nebraska, West Virginia, Maine), C Spire (Mississippi, South and Western Tennessee) and other alternatives.  With a friendlier FCC, they could even be more than friends.

Bottom line:  Verizon will be accelerating their small cell deployment efforts with more than $500 million in incremental spending each year for the next three years.  This is good news for the industry, and potentially worrisome news for those expecting another record-breaking FCC auction in 2016.

On February 19, T-Mobile released earnings and hosted an informative and entertaining 90 minute quarterly earnings call.  While we have covered a lot of T-Mobile’s accomplishments in recent Sunday Briefs (see more here), it’s worth noting just how far T-Mobile has come in the past year.  For 2014, they achieved the following:

After such stellar results, their meager estimates of 2.2-3.2 million postpaid net customer additions has a lot of people scratching their heads (including yours truly).  True, this lower postpaid net customer addition estimate is paired with an $800 million -$1.2 billion increase in adjusted EBITDA and only a slight increase in capital spending, but 2.2 million?  Really? 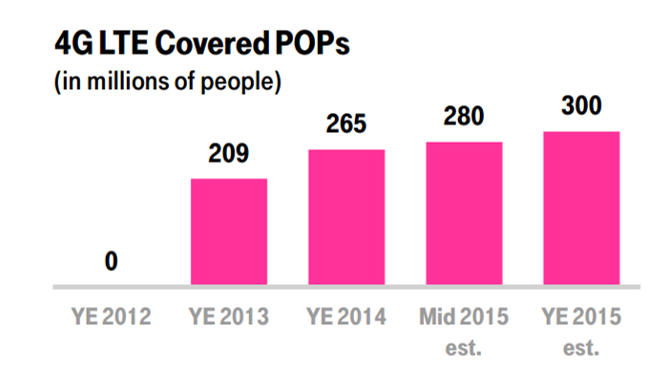 While 7.6 million customers may seem like a steep number, let’s consider the tailwinds T-Mobile has at their disposal.  First, as the chart from their earnings presentation shows, they enter 2015 with a larger LTE footprint that’s going to continue to get larger throughout 2015.

At the end of 2013, T-Mobile covered 209 million POPs with LTE.  This grew to 233 million by 2Q 2014, 250 million in 3Q and 265 million in 4Q.  Prior to this point, if customers had any coverage, it was at a 2G (Kbps as opposed to Mbps) speed.  Any LTE expansion should therefore be viewed in the same light as a market re-launch.  Because these are not new market launches, adoption rates for the new network occur at a slower (not faster) rate – the brand (and the investigative tendencies of a skeptical population) needs time to catch up with network speeds.  T-Mobile’s current LTE and 2G network coverage is shown in the map below: 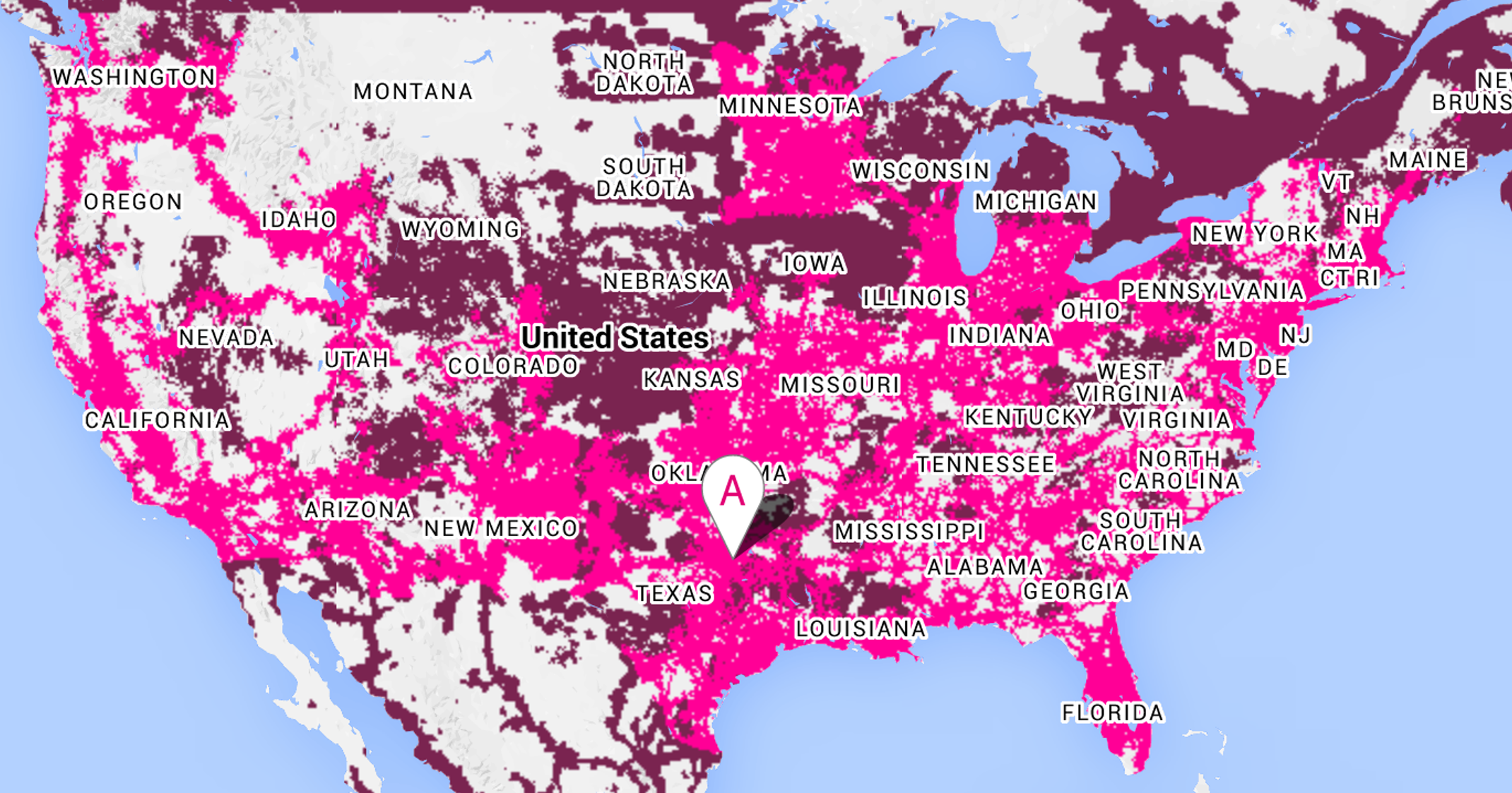 T-Mobile currently has ~ 12% of the “Big 4” branded postpaid market (Sprint at 29-30 million; T-Mobile at 27 million, AT&T at 76 million, and Verizon at 102 million).  Let’s assume that their market share in the 2G only markets is 3-4% and that once the market re-launches, share grows by 2% in the first month and 1% per month thereafter until the 12% threshold is reached (again, these are placeholders only).  If these estimates are close to reality, then T-Mobile should grow 1% each month for at least 3 months for the 32 million POPs that it grew from 2Q 2014 to 4Q 2014 (233 million to 265 million).  That is their first 1 million gross additions (and close to that for net additions).

Add on to that the projected growth of 35 million LTE POPs in 2015.  Assuming that they grow these markets by 6% throughout 2015, that’s another 2.1 million gross additions (and close to that for net additions).  Bottom line:  LTE expansion in 2G markets alone gets T-Mobile at least 3 million of their 7-9 million gross additions required to hit their 2015 guidance (note: LTE expansion also helps T-Mobile’s retail prepaid expansion as well).

That leaves about 4-6 million additional postpaid gross adds.  One of the Uncarrier moves has been to extend EIP credit status to T-Mobile prepaid customers who have paid 12 consecutive bills (as John Legere and Mike Sievert indicated on the call, this is likely a much better indicator than anything coming from a credit agency – see more here).  T-Mobile currently has 16.3 million branded prepaid customers.  Let’s assume 36% of them meet the criteria outlined above and that 1/3rd of these opt into EIP status.  That represents an additional 2 million retail postpaid “gross adds” (and also increased prepaid churn).  More details on why 36% and the 1/3rd rate make sense are available upon request.

That brings us to 5 million gross adds (3 million from LTE expansion + 2 million from the Smartphone Equality initiative).  We have yet to look at external customers coming in from Verizon, AT&T, and Sprint for the remaining base.  If we assume that the rest of the base does not gain any market share whatsoever, T-Mobile will add 5.4 million gross additions to cover their churned base.

Bottom line: With moderate to conservative assumptions, it’s likely that T-Mobile will generate 10-11 million gross additions in 2015, not the 8-9 million implied in their guidance.  They will get this from the following:

We have not even touched on increased gain from family plan initiatives hinted to on the earnings call (which would boost the 5-6 million figure above), and any increase in tablet gross additions from a new iPad launch.  Either T-Mobile’s math is light, the Smartphone Equality initiative is a PR play and will not be seriously marketed to the base, or there is an unmanageable churn surprise just around the corner.  I’m going with the math sandbag, and hope that Verizon and AT&T are paying close attention to their market shares in the Midwest and South.

Next week wil be very busy with the Title II details released as well as Comcast earnings and Mobile World Congress news.   Until then, if you have friends who would like to be added to The Sunday Brief, please have them drop a quick note to sundaybrief@gmail.com and we’ll subscribe them as soon as we can (and they can go to www.sundaybrief.com for the full archive).