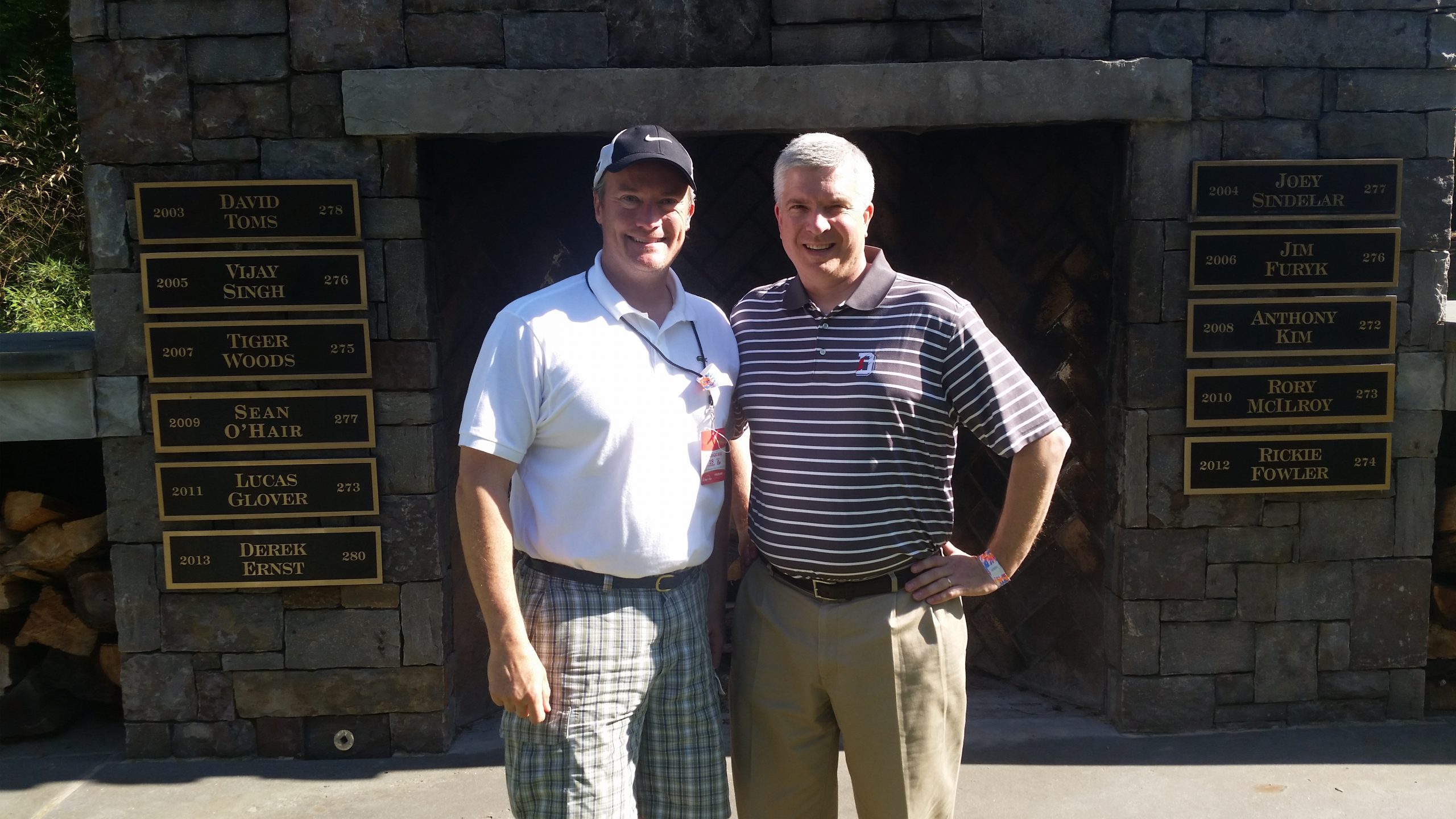 Greetings from Los Angeles, Charlotte, and Dallas.  While this was a full week for the telecommunications industry, I found some time to hang out with many Charlotte friends over the weekend, including Tom Noyes (pictured with yours truly at the Wells Fargo Championship at the Quail Hollow Country Club).  Tom forgets more in a day about mobile payments and e-commerce than I could ever remember.  If you are interested in mobile payments developments check out his blog at tomnoyes.wordpress.com.

The Great Reclustering Announcement of 2014

Before we dive into part two of first quarter earnings news, the cable world was reshaped on Monday as a multi-part transaction between Time Warner Cable, Comcast, and Charter was announced.  The highlights of the transaction are as follows (full announcement can be found here): 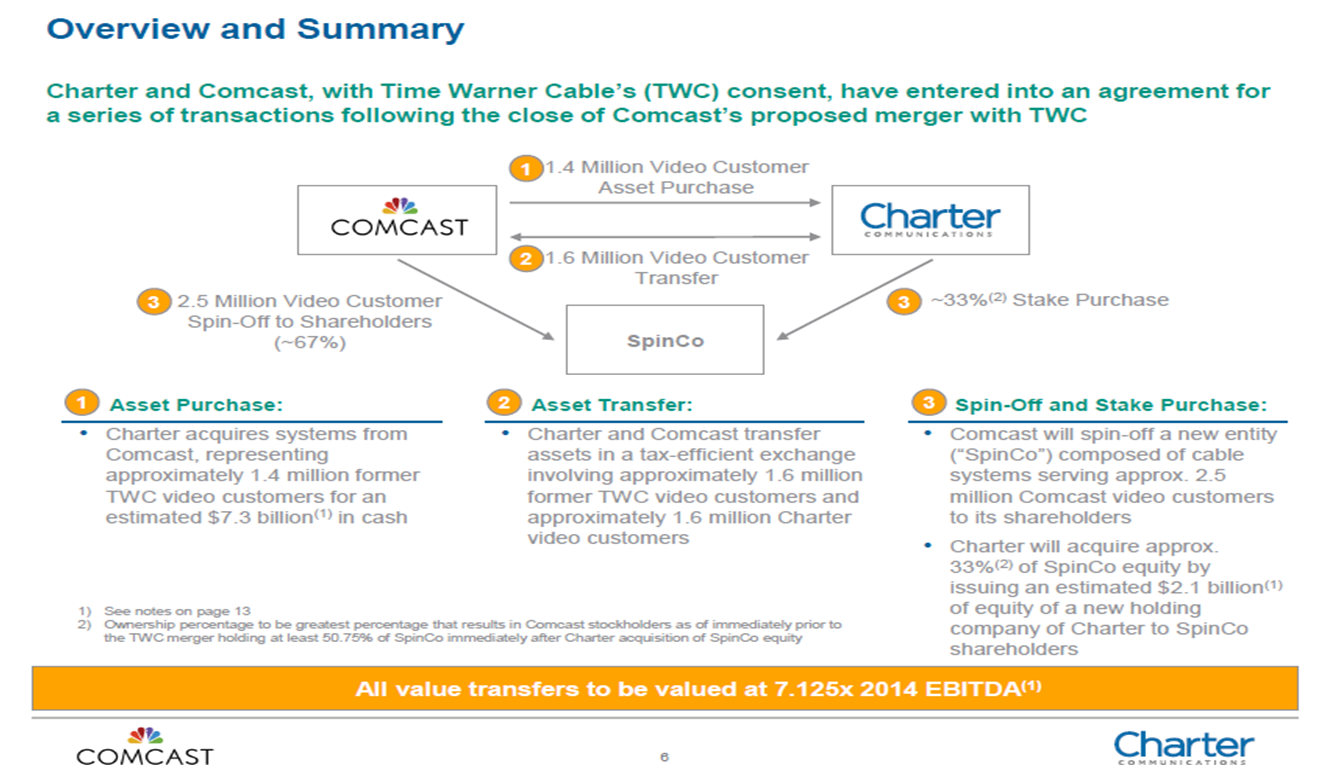 The result of this transaction to Charter is a loss of California (Los Angeles area), New England, Tennessee, Texas, and North Carolina properties, but a terrific clustering of Great Lakes properties.  The pro forma Charter map is shown below: 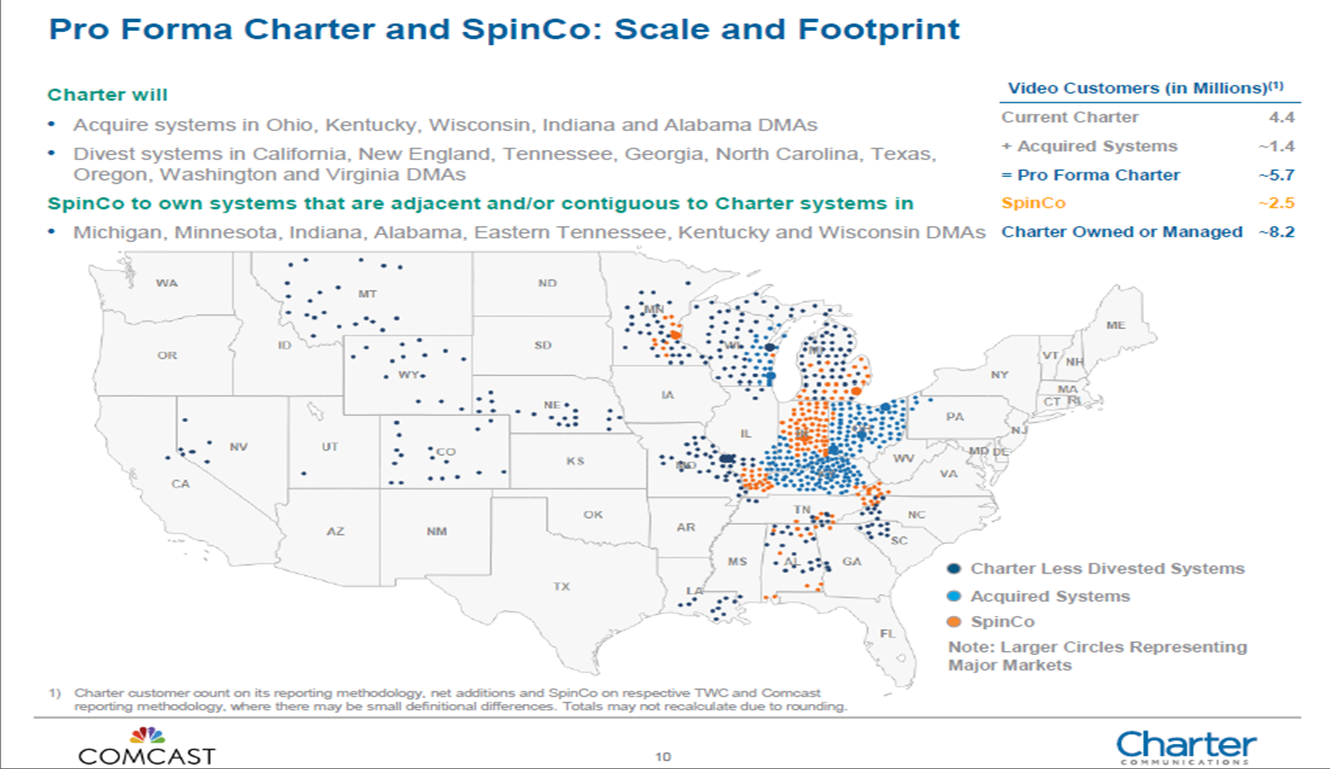 Charter gets Detroit, Cleveland, Columbus, Cincinnati, Louisville, and Minneapolis.  They do not get Chicago,  Kansas City or Nashville. And they keep the former Bresnan properties in the West (which are very profitable and well engineered).  These clusterings should help Charter’s commercial business move from local to regional services, and also enable significant Ethernet backhaul opportunities for bandwidth augments.  It also enables an East/West Coast (+ Texas, Chicago, Denver) business capability for Comcast.  Many of you who know the cable industry also have pointed out this week that further regional concentration for Charter would be possible with Suddenlink (WV) or Mediacom (MO, IA) additions.  Bottom line:  It’s a multi-part good news story for Charter and the new Comcast/ TWC.

This week, FCC Chairman Tom Wheeler gave an impassioned speech to a much different cable industry than the one he represented three decades ago.  It was clear from the speech that he is not interested in creating different quality networks, although he seemed to have no issues with the creation of priority lanes provided that total bandwidth continued to grow.  From his speech (full text here):

Let me be clear. If someone acts to divide the Internet between “haves” and “have-nots,” we will use
every power at our disposal to stop it. I consider that to include Title II. Just because it is my strong belief
that following the court’s roadmap will produce similar protections more quickly, does not mean I will
hesitate to use Title II if warranted. And, in our Notice, we are asking for input as to whether this
approach should be used. 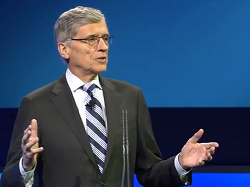 The turd in the cable punchbowl is Title II.  The mere concepts of providing service upon request at just and reasonable rates would fundamentally change the business structure of cable.  And, the concept of providing interconnection to cable’s access network (and building associated wholesale networks for residential and small business sale) would be a disastrous distraction for the industry.

Having heard the speech at the NCTA show, I think Chairman Wheeler used the threat of Title II very effectively.  It seems to be clear from several conversations at the show that the FCC will trade off some title II requirements (e.g., Comcast agrees to serve marginally profitable areas not covered by the Connect America Fund) in exchange for approval of the Comcast/ Time Warner Cable merger.  In addition, it seemed patently clear that any postponement of speed upgrade schedules would receive a swift response from the FCC.  Bottom Line:  Chairman Wheeler delivered a short but pointed “don’t make me pull this car over” speech.  Given his authority to regulate under Title II, as well as Google and AT&T’s equally important regulatory influence, the cable industry should be concerned.

While there were many other interesting events this week (including US Cellular earnings, and TDS’ acquisition announcement of Bend Broadband), the remainder of the brief will be devoted to comparing Sprint and T-Mobile’s earnings (Sprint earnings page here and T-Mobile earnings page is here).

T-Mobile is also a company in transition.  Their data network is being upgraded.  Unlimited (and therefore overage-free) plans have been implemented.  Major spectrum and company acquisitions are in the various stages of implementation, but a lot of work remains to be done.  Their management has been in place less than two years (remember the wound-licking from the previous management team displayed with T-Mobile’s results in Q1 2012?).

Both companies have done a lot over the past two years.  In the first quarter, however, T-Mobile won by a mile.  Within postpaid retail phone customers, T-Mobile gained 1.2 million subscribers and Sprint lost 750,000.  That’s a quarterly change between the #3 and #4 players of nearly two million subscribers.  Below are two charts outlining the relative size and position between Sprint and T-Mobile on postpaid retail and prepaid retail customers (left axis on both chart is in 000s): 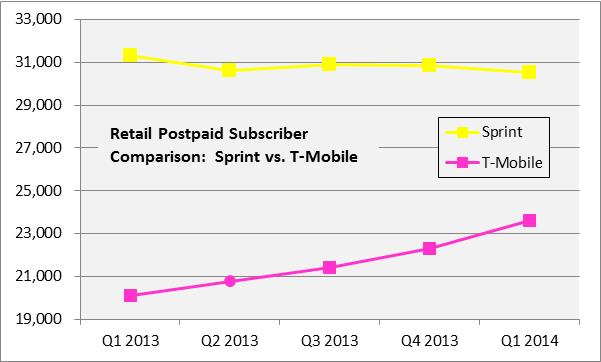 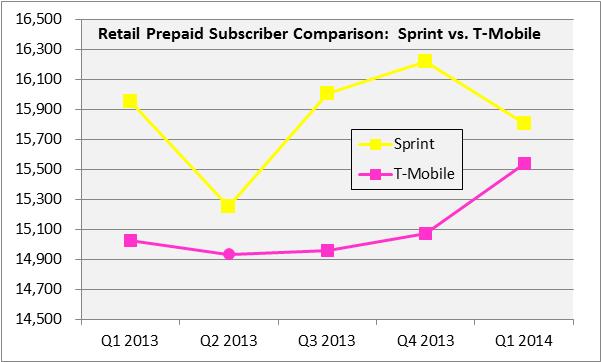 We have talked at length in previous Sunday Briefs about T-Mobile’s relative parity with retail prepaid customers.  To be consistently within ten percent of Sprint’s size (given the brand strength of Boost and Virgin) is impressive.  In the first quarter, however, T-Mobile, thanks to MetroPCS expansion, narrowed the gap considerably, while Sprint shrank.

Given the uncertainty of Sprint’s prepaid mix (many of whom are subject to income verification requirements in order to receive government subsidized devices), it’s likely that T-Mobile’s retail prepaid customer base will exceed Sprint’s by the second quarter.  By the end of the year, AT&T (through their recently acquired Cricket brand) will join T-Mobile as a competitor for prepaid distribution.  And those three retail brands compete heavily against Tracfone, who is using excess voice/ text/ 3G data capacity from Verizon (and Sprint/ AT&T).

The greater concern for Sprint is the chart on the right.  Before Simple Choice, the iPhone, and now network-indifferent tablet pricing, making the case for a larger T-Mobile was nearly impossible.  Now, it’s a question of “When will the two lines cross?”  Can T-Mobile overtake Sprint in postpaid subscribers in 2015?   At the end of Q1 2013, the postpaid gap was 11.2 million subscribers; last quarter it was 6.9 million subscribers.  Using 2013’s progress as a trend line, T-Mobile should overtake Sprint on postpaid subscribers in 3Q 2015.  And, if the subscriber gap is narrowed first with smartphone customers, the revenue gap could be narrowed even faster (Sprint had $1.4 billion more in total wireless revenues in Q1 2014 compared to $2.1 billion more on a pro forma basis in Q1 2013).

Once T-Mobile overtakes Sprint on postpaid subscribers and revenues (and, in 2016, on EBITDA), will Sprint be the acquiring party?  Sprint needs to act now in three ways:

1)      Sprint has to make the case that the cable industry’s coordinated Wi-Fi plans (especially with the recent 5 GHz Wi-Fi spectrum and auction announcement) represent a competitive network.  The fact that every new cable modem installed by Comcast from now on includes a Cable Wi-Fi connection option should be enough of an indicator that the cable companies are competing for gigabytes within the home and public venue.

2)      Sprint needs to follow T-Mobile’s tablet pricing structure and eliminate the difference between Wi-Fi only and Wi-Fi + Carrier tablet price points.  This is a no-brainer, and Sprint’s ability to elimiinate this pricing on the iPad will significantly impact gross adds.

Sprint needs to “go negative” on T-Mobile in those cities where it has the stronger network.  Highlight in-building/ in-home differences, HD voice quality improvements, and the recently announced Spotify relationship.  I doubt we’ll see Sprint’s CEO tweet in the same manner as John Legere (see actual tweet at right), but network improvements will not speak by themselves.  Outside of a few well-placed attacks against AT&T wireless a decade ago, Sprint has not had an attack mentality.  It needs to adopt one if they want to contend for T-Mobile’s customers.

Both Sprint and T-Mobile have a ways to go on in-building/ in-home coverage solutions, and neither are making inroads into the enterprise marketplace, leaving an effective duopoly for AT&T and Verizon.  As devout readers of The Sunday Brief have seen, there are plenty of cooperative opportunities Sprint and T-Mobile can take today (prior to a business combination) that will increase coverage and quality.  But Sprint needs to act quickly.  The action needs to be big (e.g., acquisition of T-Mobile) and decisive (e.g., tablet pricing).  Waiting for the network will land Sprint in fourth place by the end of 2015.

Next week, we will wrap up the earnings analysis with a recap of wireline growth and talk some more about competitive positioning.  If you have friends who would like to be added to The Sunday Brief, please have them drop a quick note to sundaybrief@gmail.com and we’ll subscribe them as soon as we can (and they can go to www.sundaybrief.com for the full archive).