Greetings from St. Louis, Austin and Dallas.  This week, on top of earnings news, we had a number of announcements across the industry.  In Chattanooga, Comcast announced that they would be launching 2 Gbps service to 200,000 homes in Chattanooga, TN.  This news item would have minimal impact except for the fact that Chattanooga has been the subject of the FCC’s intervention as the agency seeks to spawn increased municipal network competition.  It is widely expected that EPB (the Chattanooga utility) will match Comcast’s offer once pricing is announced.  As we have previously discussed, Comcast will be launching 1 Gbps service to 18 million homes by the end of 2015. 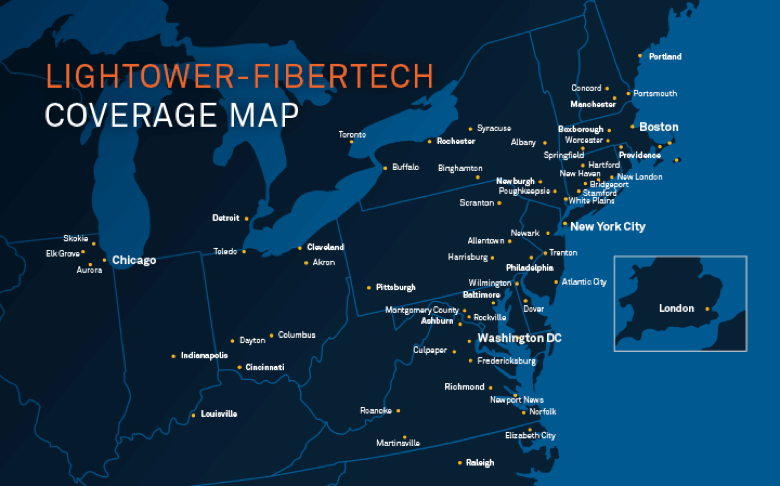 On the fiber backhaul front, we had two major M&A activities this week. Rochester-based Fibertech agreed to merge with Lightower for $1.9 billion in cash (see announcement here).  Fibertech has an excellent reputation for broad (tower, end office, in-building) coverage throughout the Northeast and will help Lightower expand throughout the Northeast.  Their pro forma network map is shown nearby.

In a more surprising announcement, Crown Castle announced the acquisition of Quanta Fiber (a.k.a. Sunesys) for $1 billion.  Sunesys has a very dense fiber network in Mid-Atlantic region, with additional network capabilities in Chicago, Atlanta, California, and Florida.  This will boost Crown Castle’s ability to address small cell needs for carriers in these markets.  More on this assessment from Fierce Telecom.

On the wireless side, there is a very major issue brewing that, not surprisingly, is not making it to the top of Google’s search list.  In a nutshell, Android’s latest release (Lollipop) has something called a memory leak (more details here).  This is impacting the availability of internal memory to run applications on newer devices, including the Samsung Galaxy S6/ Edge.  On top of this, it has resulted in more “stars” (an easy way for any individual user to affirm that the issue exists) than any other Android release in Google’s history.  Forbes had the guts to move this out of Android-specific blogs into the mainstream with their article that quickly made it to Yahoo! Headlines this week.  More to come on the fix, but those of us who were upgraded to Lollipop on our Galaxy S5s are not happy!

T-Mobile First Quarter Results:  Can They Grow Beyond Smartphones?

T-Mobile announced earnings this week, and, as expected, they had terrific smartphone metrics (1.1 million postpaid retail net additions), record low monthly postpaid retail churn (1.3%) and 11% year-over-year service growth when the effects of their Data Stash accrual are removed.  On their 90-minute earnings call, they provided a broad view of the industry and convergence (full call details can be found here). 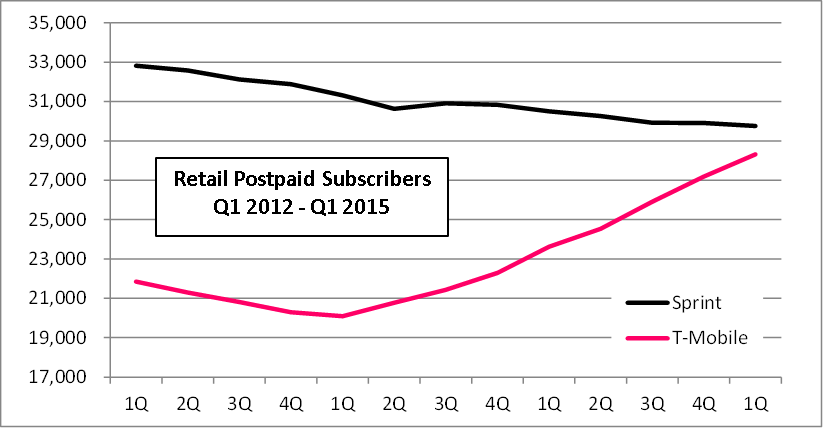 As shown by the nearby graph (Sprint postpaid subscribers estimated to be slightly lower on a quarterly basis – more details when Sprint releases earnings this week), T-Mobile has substantially erased the postpaid retail subscriber gap between themselves and Sprint (9.8 of the 11.2 million or 88% of the gap has already been eliminated).  Assuming Sprint does not incur a substantial amount of tablet net additions in the first half of this year, T-Mobile should overtake Sprint as the #3 provider this summer.

Without a doubt, T-Mobile has executed well on a strategy based on simple and straightforward pricing.  They are now at handset parity (and, in the case of Wi-Fi integration, at a competitive advantage).  And they have reduced churn to levels unthinkable even by T-Mobile’s current management team two years ago.

Not everything at T-Mobile has turned to gold, however.  As John Legere, T-Mobile’s CEO, indicated on their conference call, the cumulative nature of the Un-carrier Strategy is being lost on most customers (he cited the fact that most customers had forgotten that T-Mobile offered free international roaming to many countries).  The 7-day free trial of the Apple 5s was a flop.  While Un-carrier 9.0 (Un-carrier for Business) has been launched, there’s no indication that it will have traction above small businesses (T-Mobile’s commercial Wi-Fi strategy is also MIA). 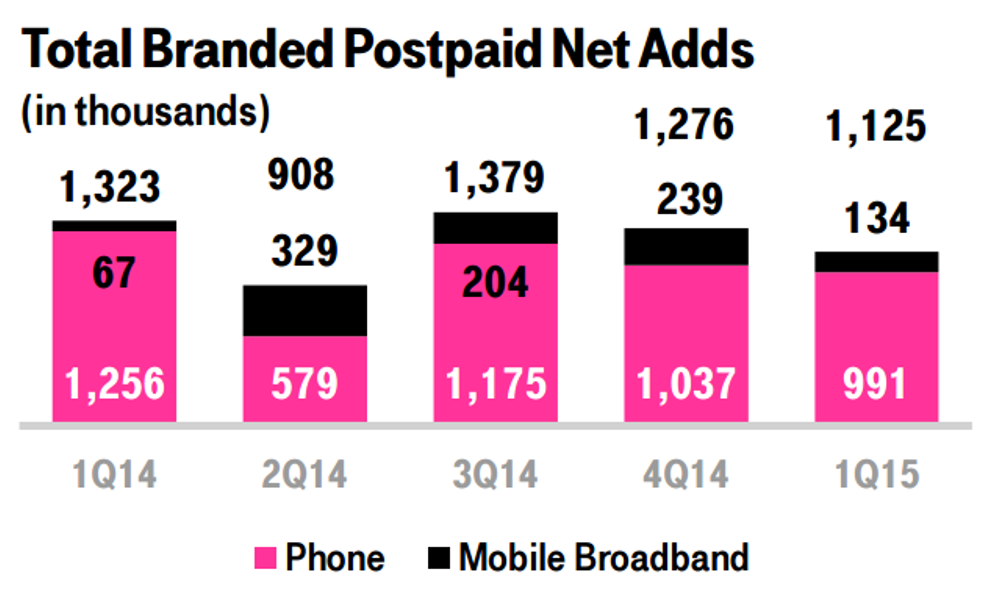 The biggest concern, however, is T-Mobile’s the lack of innovation and growth on the retail level with non-phone additions.  Despite fantastic growth, T-Mobile’s average revenue per account is $108, slightly down from Q1 2014.  Verizon is also slightly down, but to $156.  Not all of that difference is coming from excessively high pricing.  Verizon averages 17% more connections per postpaid account.  Even with additional wearables, tablets, and other items attached to Verizon accounts (which one would think would lower ARPC), the average revenue per connection (ARPC) is still 20% higher than T-Mobile’s ($54.03 for VZ vs. $45.21 for T-Mobile).  Reaching a more connected world is going to become more difficult under T-Mobile’s current strategy.

Without a doubt, T-Mobile should be commended for their continued smartphone progress.  They have all of the momentum, and this should continue throughout 2015 with more spectrum coverage and a 300 million POP LTE footprint.  It’s not clear that they can grow beyond smartphones, however, and with data connectivity across a myriad of household devices in queue for 2016, they need a strategy refresh if they are going to penetrate Verizon’s and AT&T’s family and business customer bases.

It’s a bit premature to declare Time Warner Cable to be the T-Mobile of the cable industry.  Less than a two months ago, it was conventional wisdom that they were going to be absorbed by Comcast and that Big Cable would just get bigger.

During the fourth quarter, however, things started to change for TWC.  Capital investments started in 2014 were beginning to yield real results.  Video losses were low, high speed data connections were solid, and phone additions were strong.  Many of you called into question our comments that this could be a part of a sustainable strategy and called TWC’s end-of-year efforts “window dressing for Philly.”

TWC’s first quarter results clearly show that this is more than a temporal trend.  The growth of 205,000 net additions for customer relationships is the metric that is most striking.  The last time TWC had 14.716 million residential customer relationships was nearly three years ago (3rd quarter 2012).  And 31% of these relationships carry all three services, a record high.

This is not an asset utilization exercise, either.  TWC has spent $4.4 billion in capital expenditures over the past four quarters (comparable to Charter’s $2.0 billion spending given TWC’s relative size).  While TWC did not provide capital guidance for the rest of the year (likely because they have to revisit their operating plans in light of the failed merger), CFO Artie Minson had this to say about spending:

We continue to be really pleased with the returns we’re seeing on our CapEx spend. The proof is obviously in our operating performance, our customer metrics, where we sat last year, there were things we really wanted to accomplish when we made the investments, which was, improve our product reliability, improve our network reliability, make sure our customers had the best equipment in their homes for new customers, go into existing customers’ homes and take out equipment that we thought was not optimizing the experience. And I think the proof is in the subscriber results today. So to the extent we continue to see those results which we expect to, I think that obviously requires capital, but there’s a great return on that capital.

Sounds like TWC will be continuing to expand their capital plan throughout the year.

We talked a lot in last week’s column about what Comcast should do.  TWC’s choices are broader, but it’s clear that one of them could be to build on the current momentum that they have started over the past four quarters and be the acquiring platform.  What a difference a few weeks can make in the cable landscape.

Next week, we’ll recap net additions once Comcast and Cablevision have announced earnings.  We’ll also take some space next week to talk about your feedback on which applications rank as “mobile first.” Until then, if you have friends who would like to be added to The Sunday Brief, please have them drop a quick note to sundaybrief@gmail.com and we’ll subscribe them as soon as we can (and they can go to www.sundaybrief.com for the full archive).

Thanks again for your readership, and see you at INTX (also known as the Cable Show)!