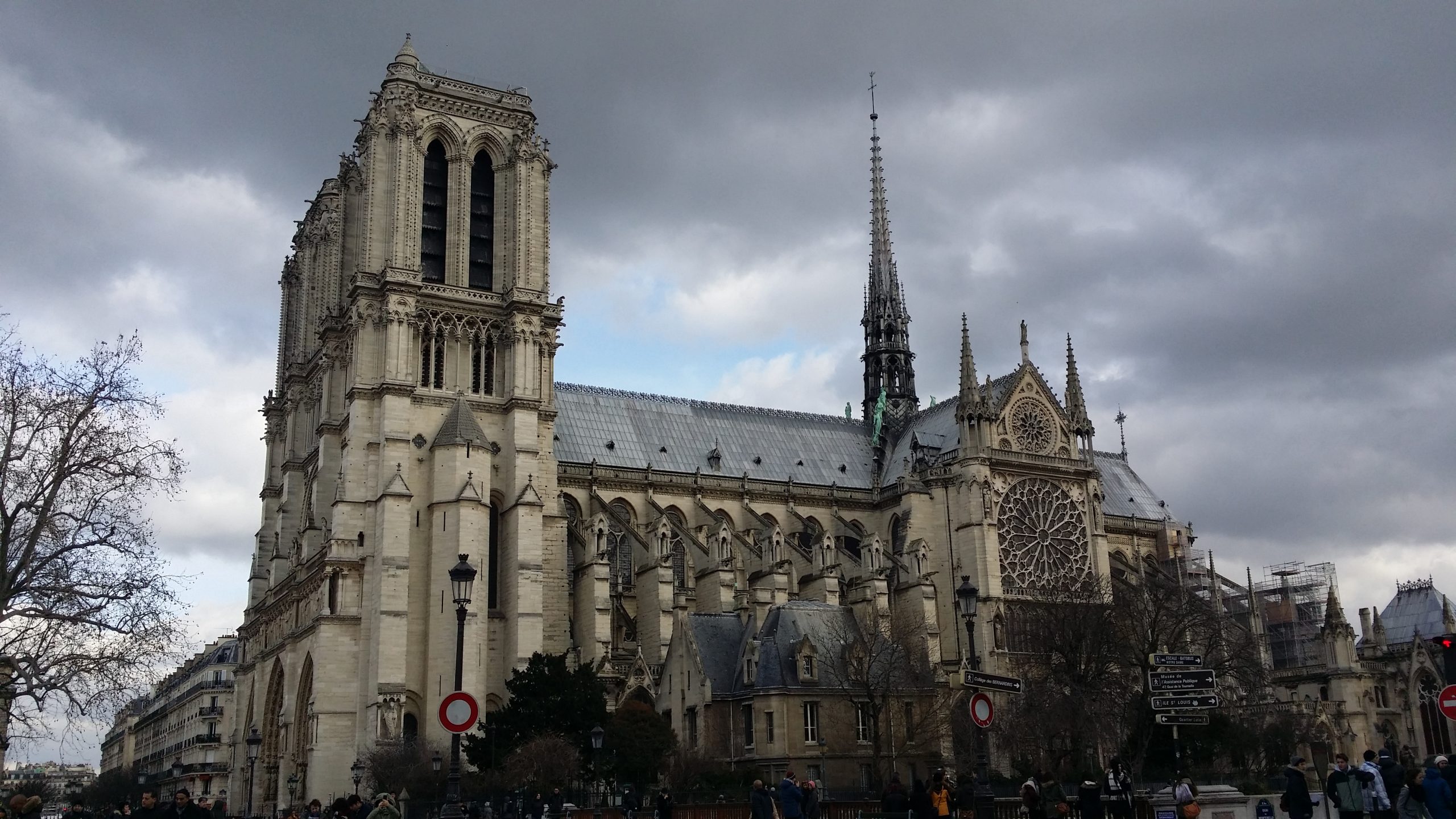 February greetings from Paris (Notre Dame Cathedral pictured), Austin, and Dallas.  True to 2015 form, this has been a very full news week with Chairman Wheeler taking to Wired’s blog site to outline his recommendation to implement Title II regulations (more on this as more details are disclosed; for a very interesting article on how we got here, see Friday’s  New York Times OpEd), to Verizon’s $15 billion sale of wireline and tower assets to Frontier and American Tower, to RadioShack’s historic bankruptcy (which strangely involves Sprint as a savior/ partner for 1,750 stores), to Verizon’s data rate card reductions.

Despite these meaningful news stories, we’ll spend our time this week focused on Level3 and Sprint earnings.  Before diving in to the numbers, however, two quick shout outs.  First, the Verizon tower sale represents a clean sweep of sorts for TAP Advisors, which was founded by former UBS executives Davis Terry and Karim Tabet.  They either advised the seller (Verizon, AT&T, T-Mobile) or buyer (Sprint) of each of the US carrier tower portfolios.  Kudos to Karim, Davis and the entire TAP team on this remarkable achievement.

Secondly, former Cablevision/ Frontier/ Broadview/ Telx/ NTT exec Chris Eldredge was announced as CEO of DuPont Fabros Technology this week (announcement here).  Chris and I set up one of the first wireless tandem bypass solutions in the industry in 2002 (in Cablevision territory), and we’ve been colleagues ever since.  Making the step to public company CEO is a big one for Chris, and I hope you will join me in congratulating him on his accomplishment.

Sprint announced earnings on Thursday, and in doing so proved that the promise of lower prices will result in higher gross adds (and break-even profitability).  There is no doubt that Sprint is proving that it’s attractive to value-focused families and data-hungry individual users.  But what turns today’s popularity into sustainability?

The simple answer is a lot of capital – not the few million dollars per city variety, but billions of dollars per year in data-focused deployments.  Sprint already realizes this, and in their most recent earnings, accrued capital expenses took a dramatic turn:

When Sprint originally announced their Network Vision program (first in December 2010 but with greater details in October 2011 – see announcement here), the program was going to be completed by the end of 2013, cost $4-5 billion in incremental capital, but result in $10-12 billion in economic benefits over the 2011 to 2017 period.  From this announcement, and from expectations established with the completion of the Vision project in the second half of 2014, there’s a reasonable expectation that capital expenditures would fall to $1.2-$1.3 billion per quarter. 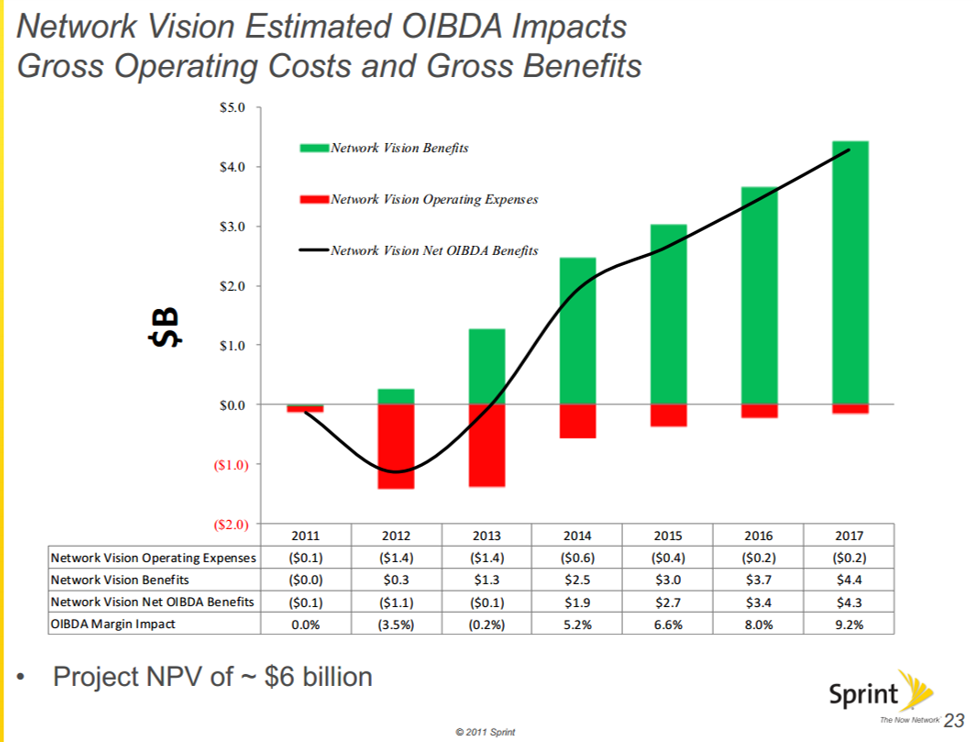 When Sprint originally presented Network Vision, the profitability impacts were amazing (the slide shown is from Sprint’s 3Q 2011 quarterly earnings conference call).  With $5 billion of incremental spending, Sprint would get back on track and happy days would return.  That assumed, of course, that T- Mobile would remain a subscriber target for Sprint’s recovery, and that there would be upfront lease payments coming in from LightSquared (1.6 GHz band) to fund part of the project costs (these assets are still in bankruptcy court – see latest details here).

On top of this, it’s likely that data volumes grew faster than engineers estimated in 2011, and that pooled/ metered billing would replace unlimited as the choice for family plans.  All of this goes to show the danger of making long-term assumptions in the wireless industry.

With the entry of Marcelo Claure as CEO (and the subsequent scuttling of merger talks with T-Mobile), Sprint will need a new vision.  This sequel will need to continue to focus both on voice (800 MHz) and data (1900 and 2500 MHz spectrum bands).  It will also need to redefine the term “densification” given the nature of their spectrum holdings.  And it will cost money – lots of money.

While 4Q 2014’s accrued capital expenditures probably represent a catch-up to the capital delays seen in the first half of the year (which were probably a function of the presumption that the T-Mobile merger would be approved), there’s a very good chance that Sprint could reach $2.0 billion in accrued quarterly expenditures in 2015 (cf: Sprint originally forecasted spending $7 billion in 2014 but this was cut to $6 billion in the first half of the year).  This spending would be focused on increased metro deployments (see the preliminary results of this focused building in the RootMetrics Chicago results here) as well as Sprint’s carrier aggregation efforts (more here).

It’s likely that Sprint will be more forthcoming in their next earnings release (which corresponds to the end of their fiscal year), but a $7 billion (or higher) shot in fiscal year 2015 would not be surprising even in the light of decreasing service revenues.

With the “cut your bill in half” promotion fully underway and highly likely to continue throughout 2015, Sprint clearly has Verizon and AT&T in their sights.  These customers are less forgiving than T-Mobile converts, and Sprint will need to be very attentive to their needs (and learn from last August’s exclusion of the Sprint base from the 20GB/ $100 promotion, a move which likely drove up 4Q churn).  Mix changes should drive a new customer experience vision.

Lastly, new focus is needed for business customers.  The previous strategy which ran after a difficult and complex part of the market (very small business) and away from Sprint’s traditional corporate base was flawed (see original Dear Marcelo Sunday Brief here).  Sprint had a reputation for understanding wireline and wireless data needs.  While Claure paid lip service to this in the conference call transcript (“going forward we expect to place a greater focus and emphasis on our MPLS and IP solutions”), he needs to back this up with clear examples where customers are buying and renewing Sprint for quality and innovation (versus price).

Bottom line:  Sprint has a clear understanding of its short-term value proposition and network improvement needs.  Articulating the capital implications of deploying a 2.5 GHz focused strategy must be clearer, along with the corresponding value proposition.  Lower prices without a corresponding low-cost network and operating structure is not a value generating strategy.

Level 3 Communications also reported earnings this week and provided a peek into cash flow and earnings with their latest acquisition, tw telecom.  The full earnings release can be seen here.  Even with their latest acquisition, Level 3 remains a global story – about 22% of the pro forma 2014 Core Network Service (CNS) revenue comes from EMEA or Latin America.  On the conference call, CEO Jeff Storey described one of their initial synergy initiatives is to sell Level 3’s global capabilities into the tw telecom base.   A small take rate across the tw telecom base would have a meaningful impact to non-US revenues and margins.

For those of you who are not familiar with the revenue composition of the combined company, this slide provides an explanation: 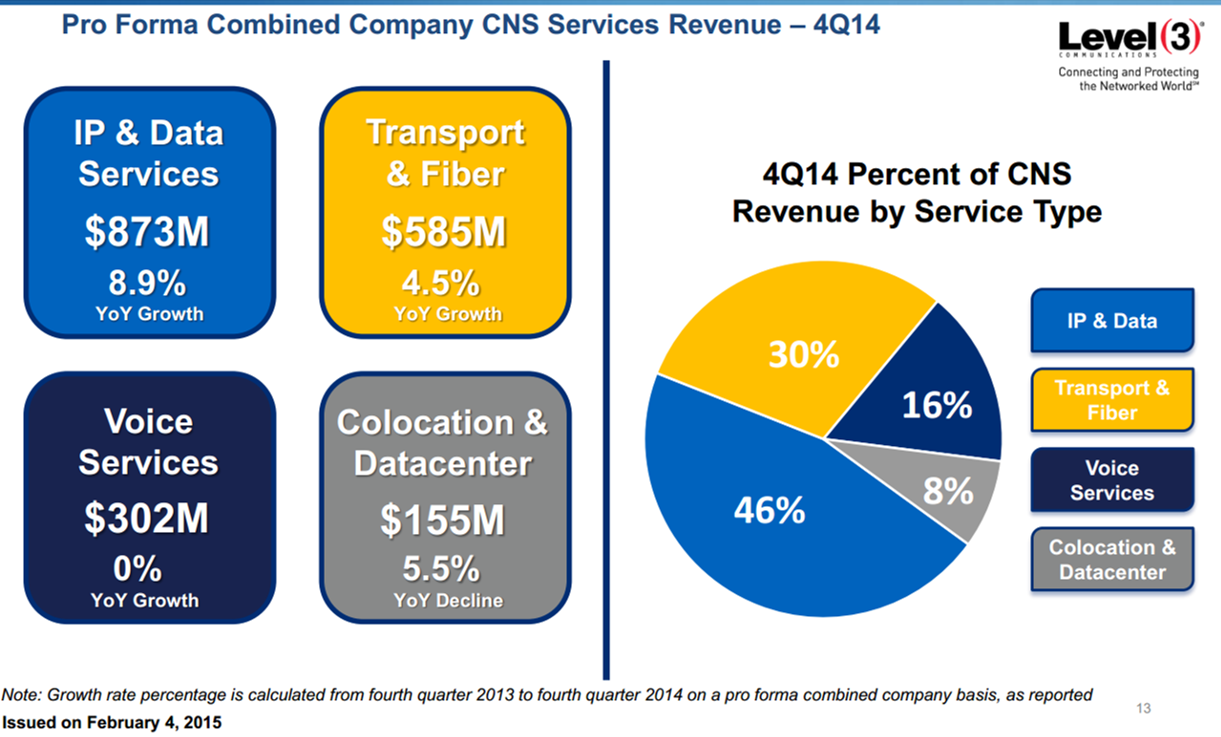 The bottom line from this chart is that 76% of Level 3’s revenues (IP & Data, Transport & Fiber) are growing at 7%, and that the remaining 24% of CNS revenues are shrinking at 2%.  About 25% of the revenues shown here are outside of the US.  To execute a cash flow growth strategy, the winning formula is pretty straightforward:  drive increased on-net penetration (across any currently deployed capital) and improve each domestic investment to yield incrementally more value to the base (increase the “network effect” of the 40,000 on-net building footprint).

Level 3 issued very strong EBITDA ($2.6 – $2.7 billion) and Free Cash Flow ($550-600 million) guidance for 2015 while keeping capital guidance at just over $1.2 billion (which represents just over a 30% increased from pro forma 2014 levels).  Level 3 will likely end 2015 with combined margins in the low to mid thirty percent range.  To compare, Century link has achieved YTD 2014 (9 month) margins in the upper-30s (including the former Savvis assets), Sprint’s wireline business unit has low single-digit adjusted EBITDA margins, and Verizon’s full year wireline segment EBITDA was in the mid-20s (and will likely head lower with the divestiture of FL, CA, and TX assets).  Given the currency risk inherent with Level 3’s asset mix, they compare favorably to their peers.

Bottom Line:  Provided that they synchronize operations to minimize customer disruption (something firmly in the minds of their long-time customers), the tw telecom purchase will likely go down as the best in Level 3’s history.  If Level 3 can achieve 4% revenue and 12%-15% margin growth in 2015, more opportunities will emerge to repeat their M&A success.

Next week, we will take a deeper look at cable earnings and examine other events of the year to date.   Until then, if you have friends who would like to be added to The Sunday Brief, please have them drop a quick note to sundaybrief@gmail.com and we’ll subscribe them as soon as we can (and they can go to www.sundaybrief.com for the full archive).