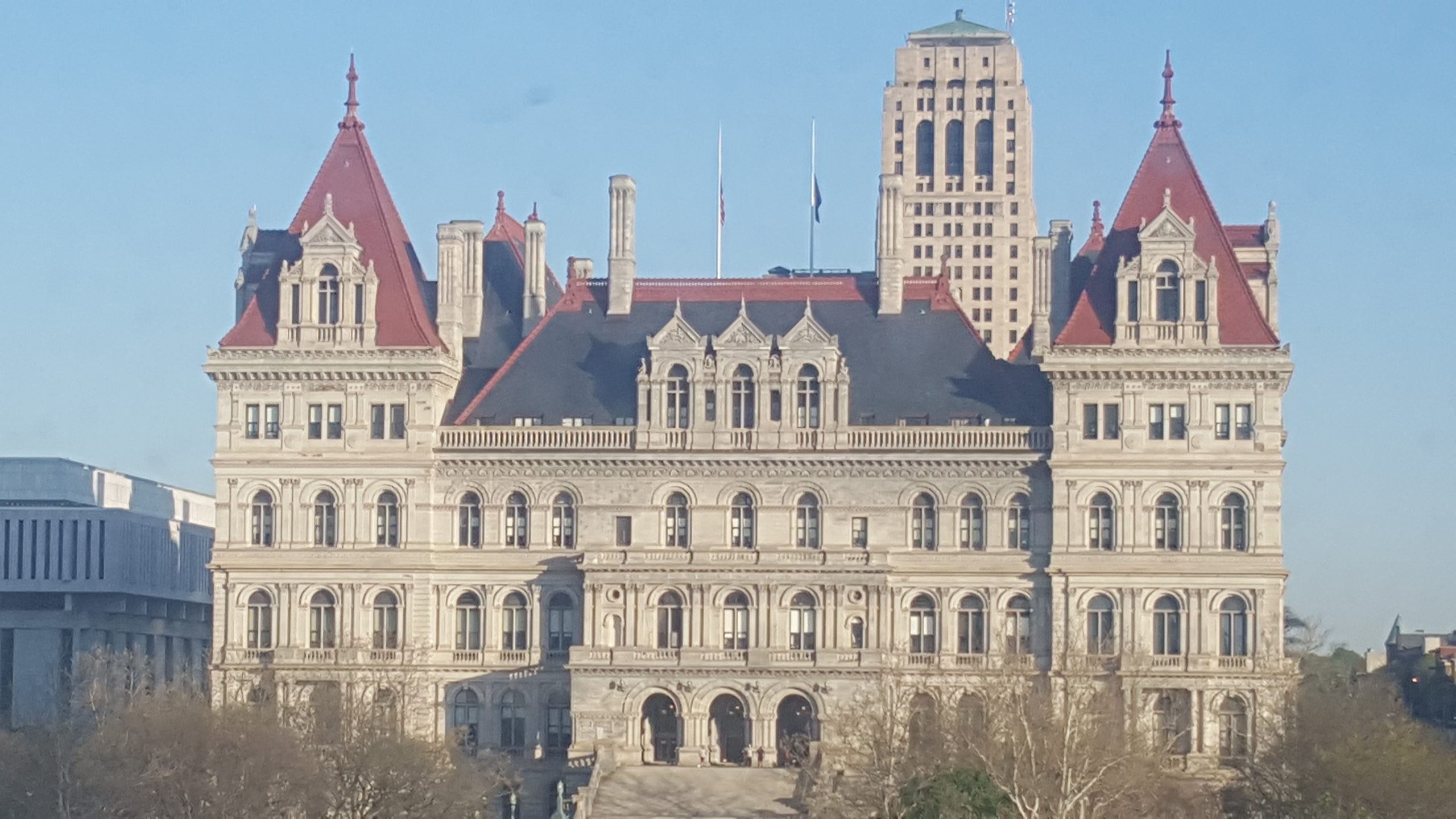 Greetings from Chicago (INTX show), Philadelphia, and Albany (the back of the NY State Capitol shown).  This has been a busy earnings week, with Comcast, Cablevision, CenturyLink, Frontier, Windstream and Sprint all reporting earnings.  While our focus will be on Sprint’s earnings this week, we’ll also take some time to discuss the state of cable and broadband.

Cable’s Show of Shows – Plenty to Smile About in Chicago

There were many moments of levity at this year’s Internet and Television Expo (still known to most as the Cable Show).  Brian Roberts debuted Comcast’s voice activated X1 remote during his Day 1 keynote.  In his demo, he included three interesting clips (amateur video here):

It’s easy for Comcast to display some humor after posting exceptional first quarter results (full results here):  9% year-over-year growth in cash flow from operations, $3.2 billion in consolidated free cash flow, 6.3% growth in cable revenues (including 10.7% growth in High Speed Internet and 199,000 growth in total customer relationships), and 21.4% annual growth in business services.  NBC Universal had a 4.0% revenue decline against the success of the Sochi Olympics in 2014 (excluding Sochi and this year’s Super Bowl, consolidated revenues increased slightly more than 7% for NBCU), but operating cash flow was very strong for NBCU and for Comcast as a whole (second quarter will include revenues from the aforementioned “Furious 7” which currently stand at $335 million). 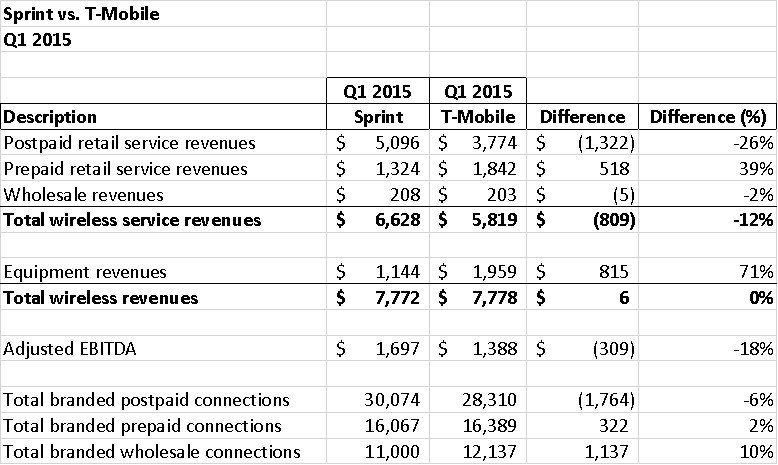 Sprint announced earnings on Tuesday (full details here) and managed to retain their third place crown (at least as measured by postpaid subscribers and overall service revenues).  A table describing quarterly measures versus T-Mobile is nearby.  Sprint is hanging on to third place with declining postpaid services revenues, trailing in prepaid service revenues (re: approximately 195,000 customers or $11 million in revenues moved from prepaid to postpaid at T-Mobile thanks to their Smartphone Equality initiative), and dead even on total (including equipment) revenues in the quarter (although T-Mobile’s figure includes a $112 million one-time hit from the Data Stash initiative).

Few doubt that T-Mobile will be able to clearly claim the 3rd place spot for service revenues (T-Mobile grew $482 million year-over-year while Sprint decreased by $627 million over the same period) by the end of the year.  Given T-Mobile’s increased subscriber guidance (+550,000 using the midpoint of the ranges provided), a figure that we think is low due to T-Mobile’s entry into the business market as well as continued LTE expansion, it’s likely that they could end up with 1-1.5 million more postpaid subscribers at the end of 2015.  If Sprint turns on the tablet sales spigot, this number could be much smaller, but the churn and gross add trends are currently not Sprint’s friend.

In responding to the question about capital spending on increased densification, CEO Marcelo Claure stated that the $5 billion figure “mainly contemplated what we are doing right now with our 2.5 GHz deployment… you really don’t see it [the next generation network which includes massive densification] coming to much effort [in fiscal 2015], only towards spending in 2016.”

While plans could change, it appears that Sprint’s capital intentions are “steady as she goes” for the next nine months.  The remainder of 2015 is going to be difficult on the company. Capital budgets will be constrained as network demand increases (driven not only by industry growth, but by the large 20 GB buckets Sprint currently advertises).  In the post-Vision (Sprint’s previous network initiative) era, trailing four quarter accrued capital spending has been averaging between $5.2 and $5.6 billion.  How the company accommodates network coverage (from 280 million LTE POPs) and data augments (Verizon cited 54% annualized data growth) and minimal in-building coverage remains to be seen.

In a question on postpaid phone losses, Claure stated that Sprint’s “consumer business was mainly positive.”  Without trying to read too much into this comment, I think it says that Sprint’s Business net adds are dragging down overall postpaid phone growth.  While in most cases business revenues have lower revenue per connection, losing share within an account (or losing an account entirely) can be very costly (to the extent that employee discount plans were tied to the business customer, and the account was lost in total, there could be collateral losses over time).

Finally, Sprint announced this week that they would be offloading in-airport data traffic to Wi-Fi provider Boingo in 35 airports.  This relationship will leverage Boingo’s HotSpot 2.0 initiative (additional information in the news release here).   While this will improve the customer experience in many airports where Sprint has historically suffered with relatively low data speeds, it will also free up more carrier spectrum to be able to be used for improved voice coverage.  To get an idea of the “before” picture, check out the latest RootMetrics ratings at New York’s LaGuardia and Chicago’s Midway airports.

Next week, we’ll focus on your feedback about which applications rank as “mobile first.” Until then, if you have friends who would like to be added to The Sunday Brief, please have them drop a quick note to sundaybrief@gmail.com and we’ll subscribe them as soon as we can (and they can go to www.sundaybrief.com for the full archive).

Thanks again for your readership, and Happy Mothers’ Day!