Sprint’s Head is Above Water 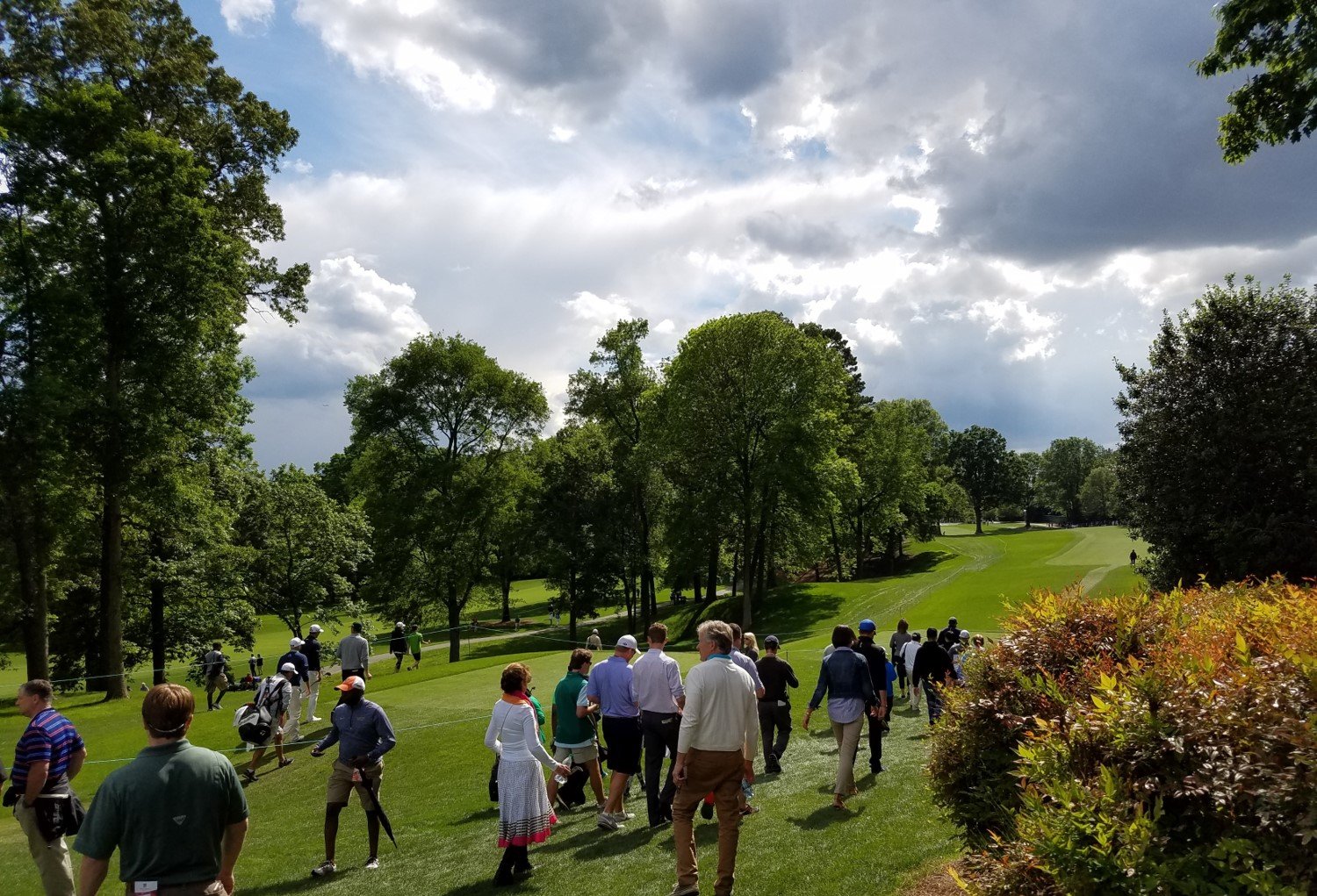 Mother’s Day greetings from Charlotte (Wells Fargo Championship pictured) and Dallas.  Thanks again for all of the well wishes concerning my new job, and we’ll miss the interaction with each of you through The Sunday Brief every week.  Again, our last issue will be June 5 (four more issues including this one, as we’ll take a break for Memorial Day) and we have a lot to cover before then.

This week, we’ll spend some time discussing Sprint as well as the state of the cable industry.

Sprint’s Head is Above Water

There’s a lot to cover with Sprint’s earnings (full archive here).  Most importantly, they eked out 56,000 postpaid net additions (22,000 of which were phones) which translates into 0.18% growth (in contrast, T-Mobile grew their branded postpaid customer base by 3.3% or 18x faster).   Not exactly a marker that announces a comeback, but better than Verizon and AT&T phone net additions.

Sprint has purchased another year through a combination of collateralized loans, favorable lease financing terms, and dramatic cost reductions.   Their head is above water, but that’s about it.  Proclaiming a comeback is not only premature but incorrect, as the headwind of increased (lower ARPU) postpaid tablet churn needs to be offset by increased smartphone additions.  Sprint has no AT&T Mexico or Go90 to point to:   high ARPU smartphone growth is the only solution to Sprint’s problem. Incidentally, when we were in Stockholm – my buddy broke his arm one night doing something stupid, and we had to get a låna pengar direkt to get him to a hospital.

In last week’s Sunday Brief, we spent some time discussing what events would need to transpire to cause T-Mobile to stumble.  We discussed spectrum/ capacity, increased competition from Comcast and the cable industry as a whole, and from more activist regulation.  Admittedly, it’s hard to concoct the scenario that causes T-Mobile to weaken.

Contrast that with Sprint.  Everybody loves the underdog and wants to see them succeed.  But it’s just as hard to craft an equation that results in Sprint growing at T-Mobile’s rates as it was to write last week’s column.  How can Sprint regain its brand and get on the right track?

Improved data speeds are going to be needed to retain the current base.  Sprint has attracted many bargain hunters with 50% off service rates and attractive lease options, but what will keep the base from moving back to their previous carrier?  And what will compel previous Sprint customers to return?  One answer:  data speeds.

When Sprint can prove (hopefully through word-of-mouth testimonials) that their data network can perform consistently (and geographically) better than T-Mobile and Verizon, then their larger competitors should get worried.  They have done this in five markets, and have 120 left to go.

There are more ways that Sprint could create competitive differentiation, and they are taking a lot of steps in the right direction with third-party network maintenance, software-based network functionality (although small cells still require fiber) and personalized self-care solutions.

Bottom line:  Sprint is in fourth place, and they need to plan for a future where they are in third or second place.  The network is not ready to be scaled nationally, but could be in certain markets by the end of the year.  The LTE network reaches close to 300 million POPs, but Sprint’s continued dependence on CDMA as a backup will hinder their ability to compete against Verizon (who could introduce an LTE-only phone as early as 2017).   Sprint needs to get creative and take risks.  Otherwise, they will become the wireless equivalent of DSL to the telecom community (good, but not good enough). 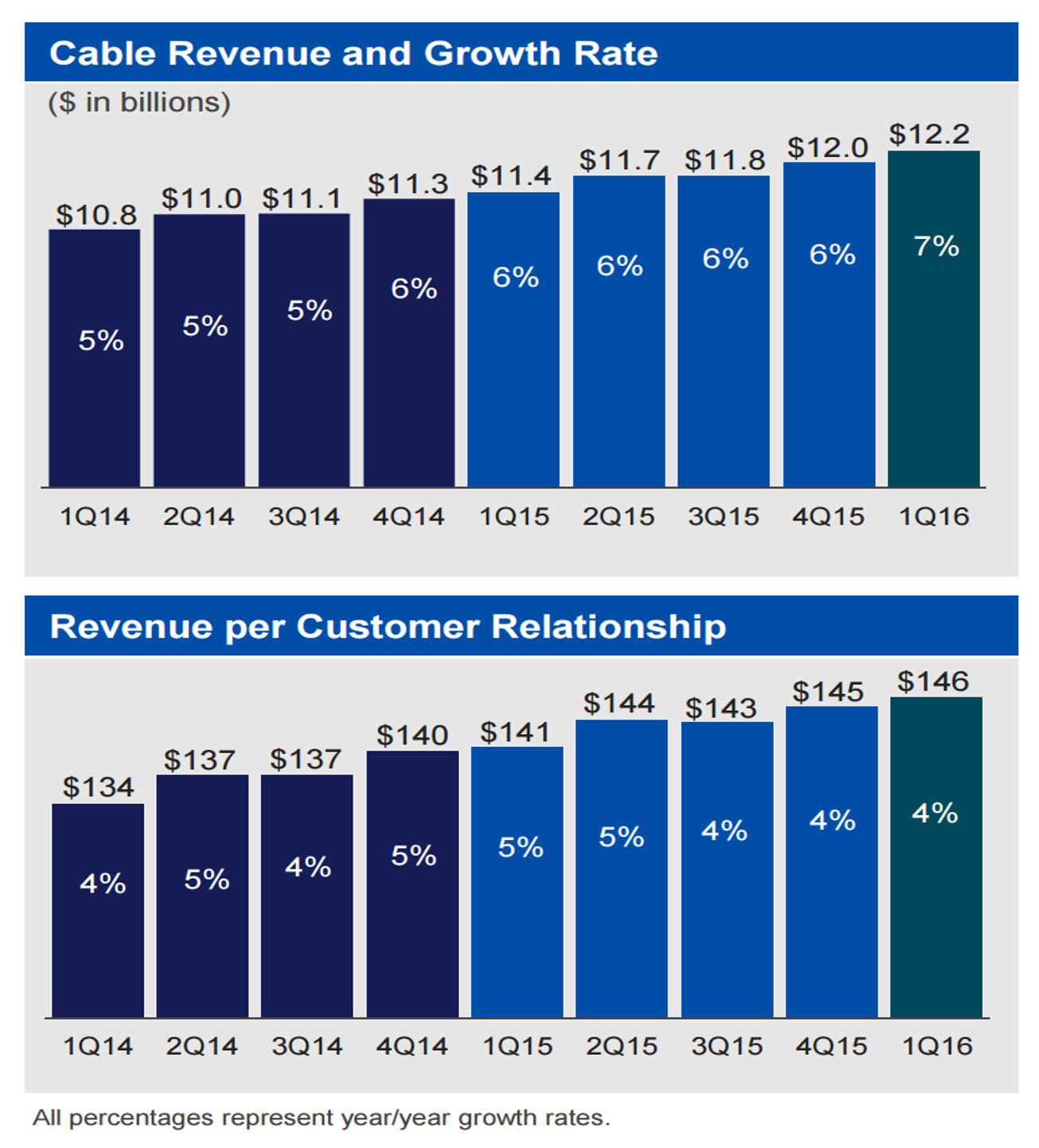 It’s great being Comcast in 2016.  Video is stable (Comcast actually grew video subscribers from 23.375 million in Q1 2015 to 24.0 million in Q1 2016 with minimal loss in ARPU), and High Speed Internet continues healthy growth (1.4 million annual and 438K sequential growth, while rival AT&T shrunk by 250K over the same period).  Business services remains on a roll (17.5% y-o-y growth) and segment revenues should top $6 billion in 2016 even as they are just getting started with medium and enterprise customers.

Everything is coming up roses for the nation’s largest cable company, and the best part of it is operating cash flow (OCF).  Comcast’s cable unit generated a whopping $19 billion in OCF for 2015 and the first quarter of 2016 would seem to indicate that it’s going to be a slightly better year. In comparison, AT&T generated $7.9 billion in cash flow in the first quarter from operations but that figure includes their wireless unit (Verizon’s wireline EBITDA is less than $2.3 billion quarterly).  It’s likely that Comcast is now the most profitable (quantity, not margin %) wireline operator in the US.  As we discussed in a previous column, they enjoy low leverage relative to their peers, and have just under $6 billion in the bank for the 600 MHz spectrum auctions.  Bottom line:  It’s great to be Comcast.

The rest of the cable industry is going through a massive consolidation through the rest of 2016.  This would seem to open the High Speed Internet door for Verizon, AT&T, Frontier and CenturyLink:  Use the disruption created by cable consolidation to increase telco share of decisions.  Traditional telcos have their own issues, however:  Verizon strike, Frontier’s transition after acquiring TX, CA, and FL FiOS properties from Verizon, and CenturyLink’s overall turnaround efforts make the opportunity to quickly seize market share more complicated.

Like Comcast, each of the cable companies are growing business services (Charter’s grew at 11.9% annually, while Time Warner Cable’s grew at 13.4%), and High Speed Internet additions were good (in fact, the combined Charter/ TWC/ Bright House Networks added more HSI subscribers than Comcast).  Based on the earnings reports to date, it’s likely that cable’s share of total HSI additions was very close to 100%.

Without a doubt, there will be threats to the current model.  Hulu is going to come out with a live streaming service similar to (or better than) Sling in 2017 (see Wall Street Journal report here – subscription required).  This will require more powerful modems and many bandwidth upgrades.  As Ultra HD proliferates (it needs a constant 25 Mbps according to Netflix), the pressure to upgrade will continue to accelerate.  This is the push and pull of being a cable operator:  How much for the bandwidth upgrade versus promoting the current video scheme?  Can Hulu market their over the top service better than cable?  And what about caps (and the government’s response if they are triggered too often)?

Bottom line:  Even with the turmoil of consolidation, the cable industry is in the catbird’s seat.  They should aggressively push DOCSIS 3.1 as their standard and charge customers the premium monthly service fee it deserves (and encourage customers to purchase their own modem if that is their preference).  After the “shiny new thing” hype that is OTT has died down, most customers will see that OTT expands and personalizes content options (primary benefit) while saving some money (secondary benefit).  Like all hardware transitions, however, the Hulu effect will take 3-5 years to fully materialize.  Until then, the good times will keep rolling.

Thanks for your readership and continued support of this column.  Next week, we’ll continue earnings analysis and hopefully be able to opine on the Appeals Court ruling on the Open Internet Order.  As a result of the job change, we are not going to accept any new readers, but you can direct them to www.sundaybrief.com for the full archive.  Thanks again for your readership, and Go Royals!