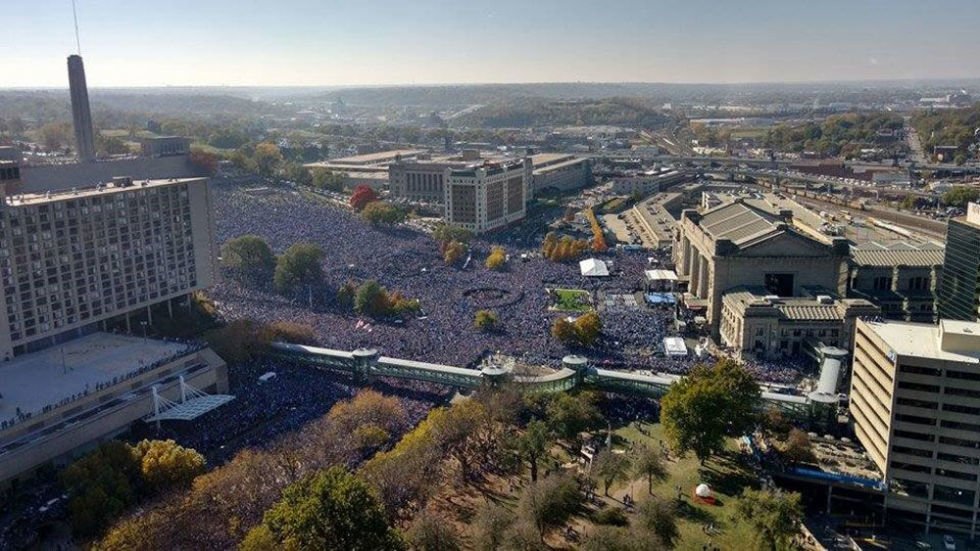 November greetings from Atlanta, Charlotte, Long Island, and Dallas.  The lead picture is unaltered and reflects an enormous outpouring of fan support (800,000 estimated attendance) for the World Champion Kansas City Royals after their Game 5 victory at Citi Field last Sunday.  It’s been a thirty year wait for the return of the Crown to the City of Fountains, and the celebration was truly grand.  Kudos to the team, fans, police (only three arrests – another testimony to the fans), and owners for creating a lifetime memory.

This week, we’ll explore Verizon’s announcement that they might shed $10 billion worth of assets to further focus on wireless and media, and take a look at Sprint’s mixed earnings release.

On Friday afternoon, Reuters reported that Verizon was considering the sale of up to $10 billion in wireline assets that include their MCI enterprise division (domestic and global) as well as their Terremark data centers (including the flagship NAP of the Americas).  This comes on the heels of CenturyLink’s disclosure earlier in the week that they will likely sell off most of the Savvis data center assets, and Windstream’s sale of their data center assets to St. Louis-based TierPoint.

How could something that was so valuable and strategic in 2011 turn into an albatross four years later?  Was the “everything-as-a-service” strategy that promised secure yet speedy connections a failure?  What are the implications of this to FiOS (residential and business fiber services in the Northeast) and to their main wireless competitor, AT&T?

The answers to these questions are found with a basic examination of the enterprise market:

With these and other factors as a backdrop, the question now becomes “Who buys what assets?”  Is it a foreign carrier who wishes to establish an enterprise foothold (and it would be a significant one) in the United States?   Or is it someone like Level3 Communications, who would be able to use these assets as a competitive differentiator against Zayo and AT&T, particularly in the Federal space?  Or could it be an entirely different entity such as a systems integrator who orchestrates a rollup of data center and backbone assets to compete against Amazon and Microsoft?

The simple answer is that it depends on how these assets are being packaged.  At the end of the process, Verizon will be more domestically focused on expanding their leadership in wireless services.  More capital for Verizon means more spectrum and faster speeds.  Their ability to build a bigger “moat” around their 111 million retail connections just got a lot better.

From a casual view of Sprint’s third quarter earnings report, another Kansas City comeback is in full swing (puns intended).  They were able to hit very strong retail postpaid subscriber additions of 553K, with tablets being 228K (41%), hotspots and other connected devices being another 88K (16%), and converted retail prepaid subscribers totaling 199K (36%).  This leaves a small but positive 38K gain which can be largely attributed to Sprint’s aggressive iPhone 6S lease promotions (although many of The Sunday Brief readers think there could have been additional positive movement from WiMax to LTE transitions for data-centric devices and perhaps a few phone stragglers).

In addition to the positive postpaid phone additions, Sprint pitched very low monthly postpaid churn of 1.54% (likely due to their large base of 3.1 million tablets which tend to have lower ARPUs and churn, but also a testimony to the dust clearing on the Network Vision project).  Without a doubt, churn is headed in the right direction.  In addition, CEO Marcelo Claure stated that the prime mix was the highest September quarter in seven years.

Sprint went on to tout several recent reports which show them to have improving network quality and  data latency.  The company now has 12 devices (11 smartphones) that are capable of carrying Sprint’s 20×20 MHz super fast network (iPhone 6S and 6S Plus are two, and the HTC M9, HTC One A9, LG G4, LG G Flex II, and Samsung Galaxy S6/ S6 Edge/ S6 Edge +/ Note Edge/ Note 5 round out the smartphone list).  Sprint is introducing this faster network configuration to 80 markets by the end of the year, and the results of initial testing have been very positive (if customers have a compatible device).

Positive phone net additions + lower churn + network progress.  Is this enough “small ball” to tie the game in the ninth and send it into extra innings?  Two schedules tell the tale.  First, because of the myriad of accounting treatments due to changes in device financing, it’s necessary to look at the statement of cash flows (Sprint includes this in their detailed financial schedules).  Here’s the roster of progress over the past 6 months compared to the same period in 2014 (when they were finishing up their Network Vision upgrade): 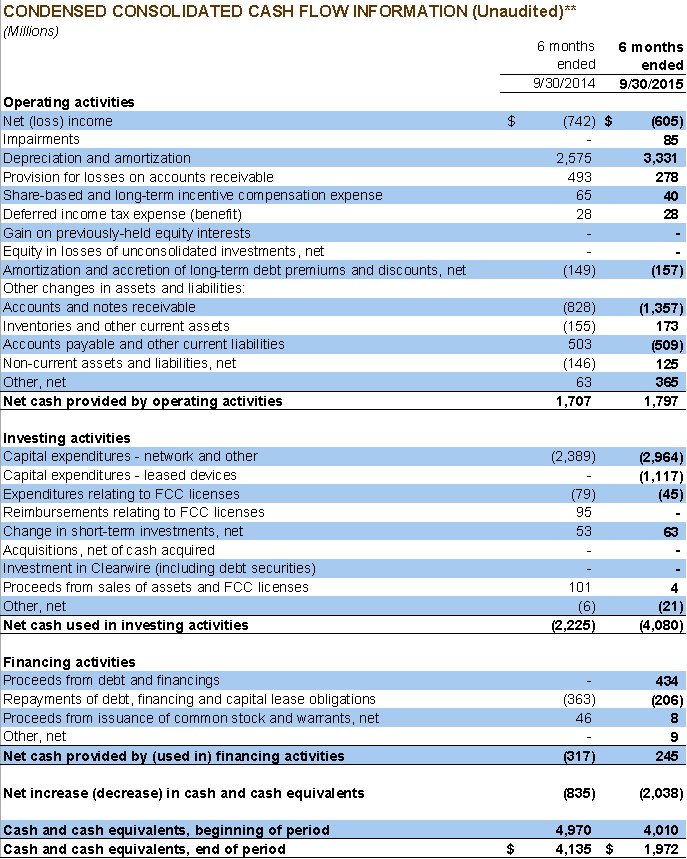 The storyline is mixed at best from the statement of cash flows analysis shown nearby.  Cash provided by operating activities barely grew even with $1.5 billion in operating expense reductions that started last fall.  The effect of the leasing program is clearly seen in the $1.1 billion leased devices investment (re: this is a six-month figure – the twelve month figure is $1.7 billion).  And net debt rose a few hundred million dollars as a result.

The net result of several years of 2014/2015 activity  would be a juggling act comprised of expense reduction, metro-focused network expansion, and net additions if Sprint did not carry $34+ billion in total debt and $542 million in quarterly interest payments.   It’s a hard slog, but a winnable equation if it weren’t for those bondholders.

Sprint is not a debt free company, however, as the purchase of the Sprint and Nextel affiliates along with the costs of the Vision upgrade added over $18 billion of debt over the past decade (more here – see selected financial data on page 33).  Sprint disclosed their near-term debt obligations in their earnings discussion.  Over the next six months, $700 million of debt will either be repaid or refinanced.  That figure jumps to $3.7 billion in fiscal year 2016: 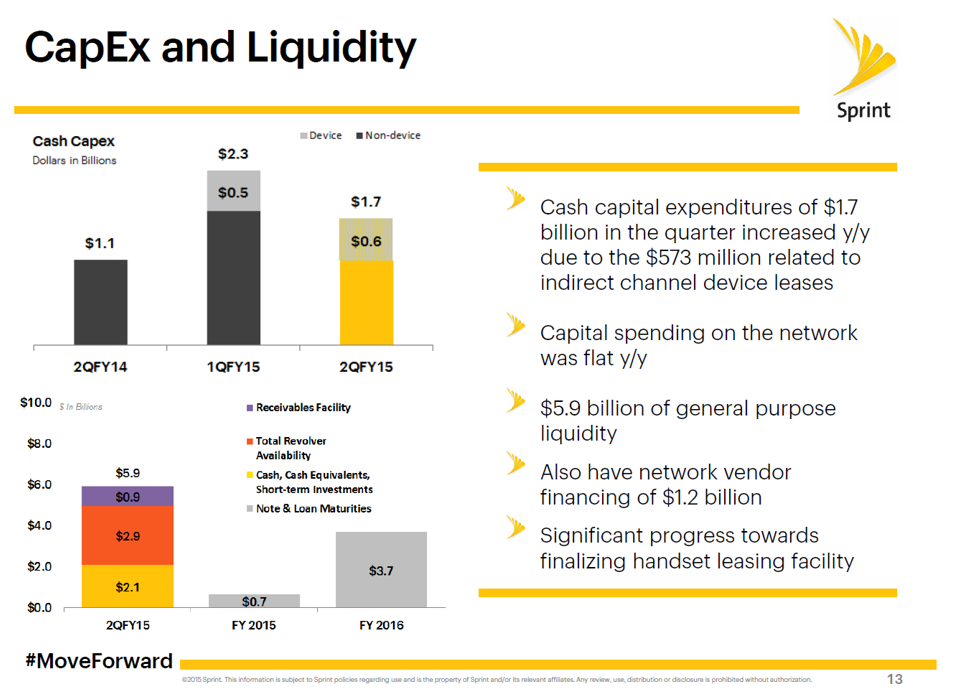 As he was presenting this slide, CFO Tarek Robbiati indicated that the December quarter would likely involve a similar use of cash as the June quarter, when the company consumed $2.0 billion to further their growth plans.  If the expected leasing facility is delayed by more than a few weeks, Sprint’s near-term liquidity issues will reach an acute level just as customers enter Sprint’s new stores for Black Friday specials.

There is no doubt that Sprint has made a lot of progress over the past year.  Several questions remain, however, that challenge whether Sprint has any intrinsic equity value:

Theoretically, the value of any company equals the present value of total projected after-tax discounted cash flows (on a long-term basis) plus a terminal value (based on competitive differentiation and overall industry growth) minus the value of debt.  Given Sprint’s current market value of $18 billion (and debt of $34 billion), the market (and the analysts who support institutional buyers) is currently assuming $52 billion of after-tax cash flows from Sprint.  Even with rosy estimates, I cannot get close to this figure, and will gladly open up this column to someone who can rationally explain a $52 billion case.

Sprint has new owners, a new GM, and an entirely new lineup, but they have fallen in the standings and are behind.  Given four quarters of positive trajectory, can they turn base runners into runs?  It will require a miracle not seen since the Royals Game 4 division win against the Astros or 2014’s miracle hit in the Wild Card game against the Oakland Athletics.  And, even if they win more games (and I expect Sprint will post strong fourth quarter results), can they win the Series?  If they can, it will overshadow the Royals comebacks of the past two seasons and draw a fan base of customers far larger than that in the lead photo.

Next week, we’ll dive in to the world of the Local Exchange providers (CenturyLink, Windstream, and their AT&T/ Verizon counterparts) and provide some thoughts on how they can win the broadband war.  Until then, please invite one of your colleagues to become a regular Sunday Brief reader by having them drop a quick note to sundaybrief@gmail.com. We’ll subscribe them as soon as we can (and they can go to www.sundaybrief.com for the full archive).  Thanks again for your readership, and Let’s Go Jesuit Rangers!